There was a gentlemen who was a hardcore carnivore a long time ago and had lots of followers doing the same but I do not remember his name? He had a website and forum advocating eating muscle meats etc. ended up dying of liver and/or colon cancer just can’t find any info on it, just disappeared?

Oops, sorry. It just came up as a ‘new post’, I didn’t notice where it was posted.

Happens all the time

If you end it with a question mark are you questioning the assertion too? I am on and off carnivore, feel much better on carnivore. I have read articles and listened to podcast, by no means am I an expert. I have not read this before that carnivores die of cancer. What I see in the literature is statements on the lack of data and reliance on observations of groups who eat meat… I take these observations with a healthy skepticism, just like the observations used to develop the Mediterranean Diet. Pair that with our understanding of how our ancestors ate is continually changing, as discussed in recent years has been biased by our own eating landscape/assumptions.

This sounds like The Bear - Owsley Stanley. He died in a car crash.

Owsley Stanley, a.k.a. “The Bear,” best known for the sound system he created for The Grateful Dead and manufacturing a very high quality LSD, was a Zero Carb Carnivore for 50 years. He…

Your response to the article is valid. I appreciate the counter evidence you brought to the table as well.
I would also state that I was not a proponent of the article but merely offering data to draw conclusions from.

Wow a carnivore for 50 years, amazing! I imagine that includes organ meats?

Not the same person, I was referring too!

What’s even more amazing are the carni’s that eat only raw meat! I just wonder what kind of effect that would have on the metabolism if you switch back and forth from cooked to raw?

“Pregnant women: one-to-two contractions and the babies out?” That doctor freaked out? Lol!

…And: Dr. Royal Lee, Conversations in Nutrition - Volume One

California gets migrants from countries with much worse working conditions. Like Guatemala, Peru and Alabama.

HCA dosing used to induce cancer in animals was beyond what any human might consume in a lifetime of eating charcoal briquettes for Sunday dinner. Oh, and with lots of carbs.

Just wonder what concentrations would it take for humans? Could bioaccumulate?

Your response to the article is valid. I appreciate the counter evidence you brought to the table as well.

Can you please be try to be a little more civil and a less confrontational?

And the raw steak juice?

Whoa - that’s some sweeping stereotyping there.

99% of human history humans lived in intimate relationship with the natural world (and pretty much in ketosis) - and even though humans are .01% of species on earth, non-indigenous agrarian civilizations and especially modern industrial culture have managed to annihilate much of the biomass. human civilization has slashed the total biomass of wild mammals by as much as 85% and has cut plant biomass in half. This inadvertent culling has had a massive effect on the overall biosphere, leading to a situation where scientists say we’re now in the midst of a mass extinction event that is almost without precedent.

People who have the heart to grieve and take proper action in their communities on behalf of living planet come from all walks of life and belong to many organizations and spiritual paths. Land stewardship as a value and ethical compass is woven into aboriginal & indigenous cultures. It’s the industrialists and dominator culture itself that we should be concerned about.

I think the recent keto documentary The Magic Pill, which begins with a focus on the Aboriginal Australian community, does a very good job at showing how insane industrial culture is.

What if there were no monolithic/stereotyped “environmentalists” and only people who knew their source enough to humbly love & defend our one and only planet in whatever ways suitable in their lives - to change the consumer/military model of economy, and protect what is left of this earth for future generations. We only defend what we truly love.

To this day, indigenous peoples are struggling to hold on to the last of their sacred lands from extraction industries (natural gas, oil, fracking etc).

Ireland and England, Wales and Scotland, used to be dense with ancient forests, 99% of those British and prehistory forest habitats destroyed by empires - and covered with what… cinder block public housing, supermarkets, malls, factories. car lots, asphalt, artificial treeless fields for agriculture, etc etc etc. There are patches of nature preserves, but they are very very rare. MOst kids only spend 15 minutes outside on daily basis, and most have little to no access to natural play areas.

Even the last remaining patch of Sherwood Forest has involved a battle with profit-focused destructive interests who care not that Sherwood Forest has its own value inherently, and is not something to control or exploit. In North America, before european invader-setters and slavers, the original forests were so thick that a squirrel could travel from Maine to Texas without ever touching the ground, and the skies darkened as huge flocks of birds frequently travelled the skies. Native Americans were forced off 99% of the lands they’d stewarded for millennia - and surviving children were forced into colonial schools (a great great gran of my own included).

Globally, 98% of the old growth forests the world over are gone (irreplaceable, as they represent primoridal centuries of a complex eco-communities - totally different than a tree plantation or forests “managed” by modern timber interests). 90% of the large fish in the sea are gone, and the oceans are collapsing - there are less than 100 orca whales left in the North Pacific - and they are starving. So, I’m eternally grateful for anyone and everyone who is fighting back on behalf of living planet. I certainly support changing the man-made/patriarchal industrial economic model based on destruction of the natural world and global domination via massive militaries (the U.S. military is the largest user of petrochemicals). Many of us know in our hearts that domination & extraction of the living land and marginalized/vunerable peoples and species - is morally bankrupt - though only some belong to “environmentist” groups like the Sierra Club, or Save Sherwood Forest, or The Rainforest Project - plenty others are doing what they on behalf of a living planet by working in the sciences and in education, etc.

The biomass distribution on Earth

The composition of the biosphere is a fundamental question in biology, yet a global quantitative account of the biomass of each taxon is still lacking. We assemble a census of the biomass of all kingdoms of life. This analysis provides a holistic...

The past research looks really grim on muscle meat only intake, as a main staple, most die of cancer eventually despite good biomarkers!

Marine life would be better!

You have not provided your source for this assertion, do you have one or more?

Hey there @SlowBurnMary – my post was mainly in jest – your response was far more thoughtful than my post deserved.

But I must tease you (gently) - I asserted that environmentalists attempt to induce guilt in others. It’s obvious that you are passionate in your concerns, but given the moral tone of condemnation that pervades your response, aren’t you kind of proving my point?

I put that question to you with as much goodwill as I can – I’ve been reading your other posts and you’re such a constructive member of this forum, I really hesitate to confront you on anything, even though I hold diametrically opposite views on some things. Plus, I don’t want to further hijack the thread!

Dave,
They scolded me for to much civility so I am passing it on.

Hmmm Interesting? But nothing conclusive, the last paragraph of that blogger has me a wee bit concerned though, because that’s the part we never get to see when the study is over with?

A Polish former Optimal Dieter who has now switched to something closer to the Perfect Health Diet noted that gastrointestinal cancers seem to be common among Optimal Dieters: …”

”…If you would like some details: the man was 64, on OD for 12-14 years, diagnosed 2 years ago, reported in good health before that. He was one of the participants in prof. Pilis’ study[1]…” “…The impression we get is that there’s rather high occurrence of gut cancer, including stomach, duodenum, colon[2]… …” 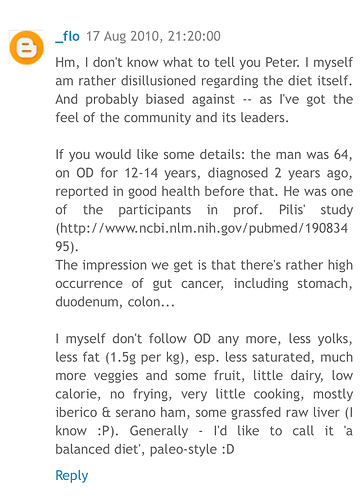 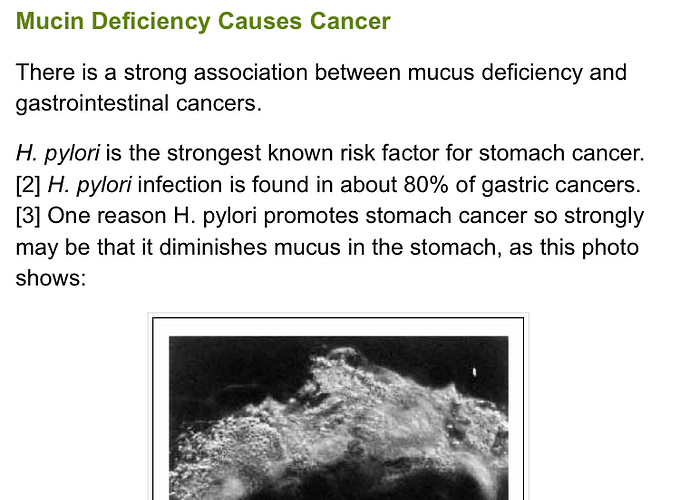 174727DF-9666-431A-85A3-27E5B20161EA.jpeg761×1860 514 KB
Do I really need to eat organic meat + dairy? Inuit Genetics Show Us Why Evolution Does Not Want Us In Constant Ketosis Resistant Starch 101 — Everything You Need to Know No Clear Requirement for Dietary Carbohydrates for Human Adults How can I want to become ketogenic again? High fiber all-bran cereal with zero net carbs - Keto friendly? Adequate fiber is a real problem
← previous page next page →