I have found reading this very thought-provoking.
Not sure how to test it myself, short of just adding more cocoa butter or stearic acid to my food – and ingesting more saturated and less monounsaturated fats – and then wildly guessing that a positive result is somehow more positive than it might have been otherwise.
But it seems like IF it’s valid, this would be a HUGE confounder related to fat gain and fat loss.

Fire in a Bottle: Humans as Oxidative Vessels

The ROS Theory of Obesity from Brad Marshall at fireinabottle.net
~based on the Protons theory by Petro Dobromylskyj high-fat-nutrition.blogspot.com

He didn’t put it all in one doc, it’s in very short simple blog posts, so here’s the list of them in sequence.

Carnivores: Rough estimate, what's the % of your meat&fat types? What Are People's Thoughts On The Croissant Diet? Jenna’s N=1 and Accountability Thread
amwassil (Michael - When reality fails to meet expectations, the problem is not reality.) 2020-01-01 18:58:38 UTC #2

Thanks for the links.

I have spent a long time trying to figure this out and the endless amount of science behind it, metabolic dysregulation, diabetes, body fat gain, body fat loss ect…

What solved the problem for me was so simple, that I still can’t believe it! Only way to describe it, is a continuous state of shock!

Simply lifting weights and paying particular attention to the Gluteus Maximus (base root cause); that’s what explains all the science your citing above. 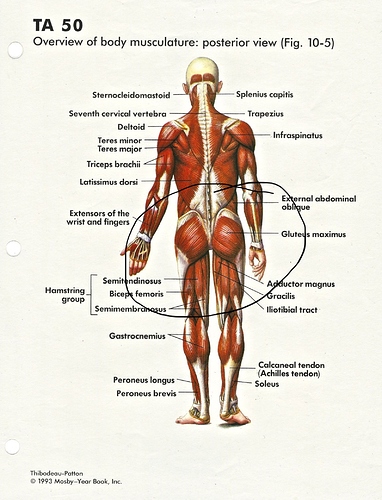 I know that sounds hard to believe but when you put the entire puzzle together (biological pathways), all roads lead to the glutes.

The theory is all about ROS and types of fat.

I don’t get how doing squats somehow summarizes that.

PS But I’m interested, I just don’t know enough to make the connection I guess.

Exactly, those are only components that make up the parts of the whole and is so vast I dare not even try to place it all in a post. I’m simply cutting to the chase and giving a basic insight into what I’m describing.

Trying hard to keep it simple!

I know that sounds hard to believe but when you put the entire puzzle together (biological pathways), all roads lead to the glutes.

Don’t forget the front of that muscle set, the quadriceps and thigh muscles. Together they’re flexor and extensor, so any workout that targets the glutes also target the quads. In his talks on “Area Under the Curve and Physiologic Headroom”, Dr. McGuff points out that because these muscles are the largest in the body, they produce the largest amount of myokines which have the most effect on muscle building (which involves insulin and other androgenic hormones, as you know). So the only reason to target them is simply because they’re the largest muscles in the body and will give the most metabolic “bang per buck”.

Thanks again for these links.

I think Dr. Michael Eades touched on reasons why PUFAs are so fattening in his talk ‘A New Hypothesis of Obesity’.

It has been a while since I watched it so I don’t recall if he specifically talked about some of these other topics (e.g., stearic acid, modifying the diet to get more, and so on) but he definitely talks about proton transport.

Exactly, those are only components that make up the parts of the whole and is so vast I dare not even try to place it all in a post. I’m simply cutting to the chase and giving a basic insight into what I’m describing.

Ok, I’ll bite. Is it due to myokine signalling similar to what Dr. McGuff has talked about in his BBS lectures? No need for explication, a simple Y/N works for me.

This didn’t make sense to me either. Or why not just eat cocoa butter which is higher in stearic acid than even the “stearic enhanced butter” that’s proposed? 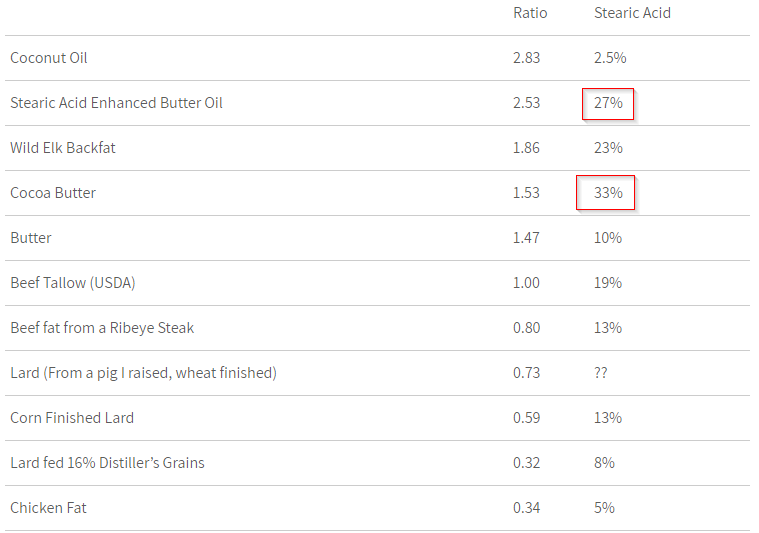 If it were not for Dr. McGuff I would still be lost in Yonkers…lol

As he stated in one of his lectures:

“I want you to take this and run with it”

I’m hopping with it because he is so right and it is so simple and obvious as to the root of all of it?

To respond to various points above -

Both of my tiny brain cells, reading the articles, felt that

a/ I think the reason for the butter oil stuff was because (1) cocoa butter is just not appropriate for 90% of the things we want to eat fat in/on but we do want to ingest the underlying fat and (2) in the end it’s probably cheaper than cocoa butter while also not making our pork chops or stir-fry veggies taste like chocolate. That’s all.

He did, in fact, suggest cocoa butter, in there somewhere (maybe in the comments too).

b/ I know what you mean about the “that’s not a natural %” but it is not impossible (though I’m not claiming it’s so) that our developing ancestors ate mostly sea creatures or large ruminants as dominant diet. The latter are high in stearic acid. The former are high in omega 3. And god only knows what was eaten that doesn’t really exist anymore or it does but it’s really just a very close relative, but might be a little different, and we can only guess today. I think this falls into the same question I used to have about Omega 3s. There are surely lots of humans who ate NOT from the water as their dominant food so how the hell did they get that ideal o3 ratio we keep hearing humans should have?

No matter what though, even if it is not true that “humans should have X% of {omega3, stearic acid, etc.}”, the better question is, “Yes, but if today’s humans, after growing up with these bodies in this environment and food supply, DO get that %, does it improve us, more than doing something else?”

And I think that is what the papers he was referencing seem to indicate, mostly for animals but at least one for humans.

Cheers to the first person who makes a X > Y > Z timeline explaining why I could eat more stearic acid OR do more squats and the results would be the same, because my brain still isn’t getting it

Cheers to the first person who makes a X > Y > Z timeline explaining why I could eat more stearic acid OR do more squats and the results would be the same, because my brain still isn’t getting it

It all goes over my head for sure. Where my head went was that Dr. Fung’s hormonal model of obesity is predicated to a large extent on inter-cellular signaling, and that Dr. McGuff’s proposition that High Intensity Resistance training like Body by Science, works because it initiates a cascade of intercellular signaling by non-hormonal cytokines called myokines by causing significant muscle damage, high metabolic stress, and high central nervous system stress. That’s what sprung to mind when @atomicspacebunny proposed the booty-centric fat burn model.

You need to do both. First do squats or other high intensity (greater than 60% 1 rep max) exercise that has a big impact on the central nervous system, causes metabolic stress (lactic acid etc), and causes extensive muscle micro-tearing. This sets of a myokine cascade the lights the wick. Then eat stearic acid. The stearic acid does something wonky and your belly fat burns off like greek fire. The end.

That’s about as far as I’ve gotten.

+1 on being curious how stearic acid % ties in. I like croissants.

Some illustrations for reference points: 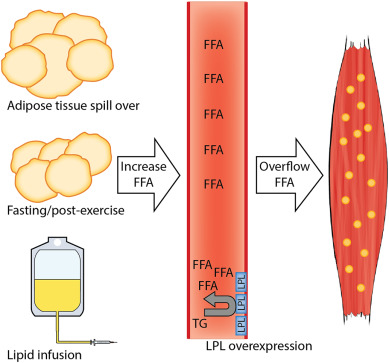 Here you can see how FFA’s spill over into the muscle tissue (ectopic fat). 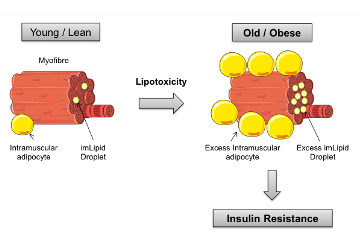 Where it states young/lean that is how they can eat vast amounts of carbs and not gain a pound is because they are oxidizing not storing carbohydrates. That is amazing! 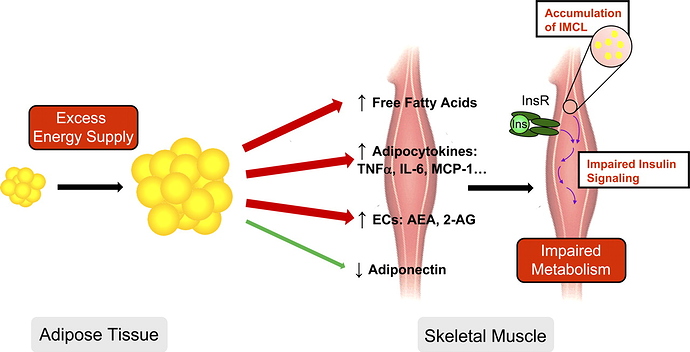 This is, incidentally, being tested and discussed in another thread:

Here’s a very interesting test of Peter (Petro) D.'s protons theory from Hyperlipid: If you’re not familiar with the protons theory, basically it’s like this. Fat cells have “switches” that make them insulin resistant (good, don’t want more energy) or insulin sensitive (bad, want more energy). Saturated fat causes insulin resistance (good), monounsaturated fat does not (right in the middle), and polyunsaturated fatty acids (PUFAs) cause insulin sensitivity (bad). So, one reason for the obesi…

This is, incidentally, being tested and discussed in another thread:

Thanks for the link!

And down the rabbit hole I go…

Thanks Bob, I watched the Eades presentation. I barely stayed awake through it because the whole biochemistry stuff fries my brain, hence my not reading Peter’s site anymore for the same reason. He did finally get to the point though so that was good.

I have to say that I think the Fire in a Bottle site does a tremendously good job (and comparatively to Eades) in describing this for the simple layman like me.

It would be nice if he’d put all those posts and diagrams into one document though. I might capture them to PDF and do that just for simplicity of reference.

Thank you Jordan! I actually thought I’d seen it somewhere but searching did not find it for me so I posted something new.

I took biochemistry in college (my first iteration of college), but that was 45 years ago so I often remember simple things like words and have no idea what they mean.

There was a comedian who said if you majored in the arts and you forgot things 10 years later, it was no big deal. But if you majored in science you remembered just enough to screw up for the rest of your life!