Pain in back hips and butt at day 4 of extendedfast

This pain is so confusing, and I have tried so many things that is why I am not sure what exactly helped me but the kale is a prime suspect.

I finally had a bowel movement which alleviated the pain.

I finally had a bowel movement which alleviated the pain.

Do you empty your bowels completely (gentle laxative) before an extended fast? Do you have trouble doing extended fasts? 0 voters This thread: https://www.ketogenicforums.com/t/pain-in-back-hips-and-butt-at-day-4-of-extendedfast/22077 and one answer to the thread in particular, has inspired me to raise an issue about extended fasting, that I mostly see “ignored” here on the forum… I come from a background of EF (10 years experience) and am part of a (non-English speaking) fasting…

I’m having the same issue it comes and goes usually it’s more intense when I lie down. I use my foam roller which helps a bit and also magnesium bathes. I’ve looked all over the internet and can’t find any answers. I am on day 14 of a dry and water fast.

I wish I had any answers but I have tried to do 2 EF and stopped each time when intermittent intense low back pain radiating through my glutes and down both legs started. The first time I thought I had sciatica (never had it but do have some arthritis in low back fron old injury). The sudden onset and intensity was scary. I got to 81 hours and ended the fast with food, Advil& Tylenol. I had my son take me to the doctor who said I had no signs of sciatica. I didn’t connect the back pain to the fast.

Last week I tried another EF. Woke up with the same back pain but after shifting sleep positions many times, fell back asleep. The next day the intermittent pain returned, getting longer and stronger. I quit at 50 hours, had food & medicine and it went away again.

Glad to hear it seems to get better with more EFs. Also glad to report I did get lasting good results from both short EFs: decreased joint pain. Beginning another EF this week and hoping the back pain/leg isn’t as bad. I want all of the autophagy I can get!

Glad to hear it seems to get better with more EFs. Also glad to report I did get lasting good results from both short EFs: decreased joint pain. Beginning another EF this week and hoping the back pain/leg isn’t as bad. I want all of the autophagy I can get!

I searched a lot about this issue. I was sad because I thought this lower back pain will never go and it will prevent me from fasting.

as you mentioned the more fasting attempts you make the less intense the pain gets . I believe the detox hypothesis but most people who have this pain they can not pin point to how it was resolved.

Hi, Original poster back here.
It’s been very interesting reading all the comments and thoughts, thanks. I’ve been having really bad lower back issues just recently and I’m wondering if I could have some sort of virus or massive inflammation. So my thought process is to do a minimum 3 day fast to get all those autophagy benefits. I have started another fast, currently on day 2. I havent taken a laxative as my bowels were working just fine previously and early on day 1. However, having said that I may consider one tomorrow I think to make sure that all that sludge gets cleared out cause obviously nothing is moving when you’re not eating!

So far so good, I havent had any headaches or anything. Was starving yesterday and of course every ad on tv was for food.

I guess if I do end up with pain again I will barely notice it compared to what my back is like currently. Only doing water, but may have half a dozen cashews if I feel a bit like I’m losing my way which is what I did last time and kept me sane.

I found it useful to take small amount of fiber like
psyllium husk while fasting to feed your friends downyander.

I mean the gut bacteria.

Good luck for your fasting

Hi, new here as of 5 mins ago!
I’m on day 4 of my first fast although I’ve been on a more or less keto diet for years.
I’m also experiencing severe lower back pain today. Yesterday and the day before were the headache days.
I’ve been trying to lay down and relax as I didn’t really sleep last night but the pain is so strong that I can’t stay in bed.
I’ve just taken some medication as I can’t bear it.
I’m doing this fast as I have CFS or something like it (there’s no diagnosis after 4 years of doctors).
I have also read that the lower back pain can be related to detoxing along with neck pain which I also experience.
It’s good to know that I’m not the only one feeling this way.
Good luck to all those dealing with this!

Back pain can increase due to toxins in the lower intestine. Blood vessels that draw nutrients from the colon are very close to the nerves of the spine. Back pain will often decrease after elimination of the toxins. Back exercises can also relieve some pain. A cold pack also will help. Using the enema kit will be the best remedy.

caffeine withdrawal gives me severe leg aches - to the point that I can’t sleep. The first time I did a water fast I could not figure out what was going on but I eventually pieced it together.

That’s an interesting idea, and it seems quite plausible. In my case, I don’t think that was the culprit as I wasn’t ingesting much caffeine prior to the fast, and I allowed myself some decaf tea during the fast, which would have kept some caffeine in my system.

Same here, lower back and butt pain, as well as down the back of my legs (as if I’m stretching my hamstrings), just kicked in on day three.

Just thought I’d chime in on this topic since I’ve had this same experience when fasting. I did a 40 day water fast at the end of last year. The low back/leg pain started around Day 3 or 4 and then suddenly disappeared around Day 10. I definitely felt like it was a detox thing because once it was gone, it was gone for good.

I just started another extended water fast for the first time since then (others I’ve done have only been 1-3 days). This time I’m going for 21 days. Im on Day 8 and have had the same pain (although not quite AS bad as last year). It started on Day 4 and I’m pressing through in hopes that it disappears again like last time in the next 2-3 days.

I can definitely say that it is not as sodium or electrolyte issue with me, my doctor also has me on a number of supplements to make sure I’m getting enough potassium, magnesium, trace minerals, etc. So my inclination is to believe it must be detox related. It IS super annoying, though. I would just encourage anyone experiencing it to give it some time (at least 10 days if you’re doing an extended fast) and see if it goes away like mine did last time (and as I fully expect it to again).

Fascinating thread. I too got the pain exactly at the end of day 4. A tremendous ache in my lower back, butt, quads and thighs. Every muscle form the lower back to my knees basically. I have been fasting a while and this is my second 5 day, but I’ve had several 3-3.5 days. I admit that I have not had a bm since before I started the fast. I’ve tried everything including salt flushes that usually work, but nothing. But I am not uncomfortable in that way in the least. The colon toxin theory is interesting but would it extend all the way to my knees?

As far as caffeine, I usually reduce day by day because in the past I have had an issue with too much caffeine on an empty stomach. This morning when I got up and started drinking coffee and drinking more electrolytes the pain is much better.

I would love to know the actual cause of this but it’s very interesting to see that other people get it too, and usually right around the 4 day mark.

As far as ketones, mine were around 6.5 (blood), but they always are when I’ve fasted a few days. And I never had the pain at those times.

Last thing I can think of is that I did yoga, as I usually do, primarily stretching, an hour or so before the pain started. Maybe stretching a lot days into a fast isn’t a good idea.

Hi. I too believe the detox theory on the lower back, legs and butt pain. I used to be very active. I was an amateur boxer, I used to run every single day and do weights and at some point I developed an imbalance in my muscles but I kept pushing on with the training. Years later long story short we develop imbalances in the muscles through knots (toxins) which lead to more and more knots in a way for your body to over compensate to help you stay active with your training if you keep pushing it (I developed 2 herniated discs as I kept trying to train everything out)… 1K of physio and 2 years of massaging out the knots and stretching, walking, going to the gym has enabled me to realise where the muscle tension in the legs, butt and hips are for me. What I’ve found is fasting shows extremely fast results in releasing the tension.

We develop imbalances in our gait over time and we get used to it. Studies show in rats that extended periods of fasting restore their gait perfectly so I strongly believe the pains are due to the toxins deep in the muscles coming out. I have only ever done 48 hour fasts and during the fasts I feel so much more flexible. After reading this thread I going to aim for the 4 day fast (I’m at 40 hours now). I only ever started fasting to reduce the pains I feel everyday (I could do with loosing the weight too but the primary reason is to get rid of my daily pain).

Mentally hard to fast for so many days but after reading this thread I’m going to do it as I think it will correct my gait and one day I can wake up without back pain.

It is amazing how often you come to the forum and find a thread trending that is right on point for your current issue. I am on day 4 of fasting and my lower back, hips, and quads have started up with a gnawing pain. I have had this in the past in just my quads but with shorter fasts. Makes it hard to sleep at night.
Irishred

Not sure if that will make sense or not but i hope it does.

Thanks for the suggestion Gurbd. I hope you will try fasting. It is a mental game and totally doable. I just keep up a self talk about “you aren’t going to die” and “your body has plenty of food to take care of you”.

Gurb is referring to trigger points. This website has a lot of great, free information about them. 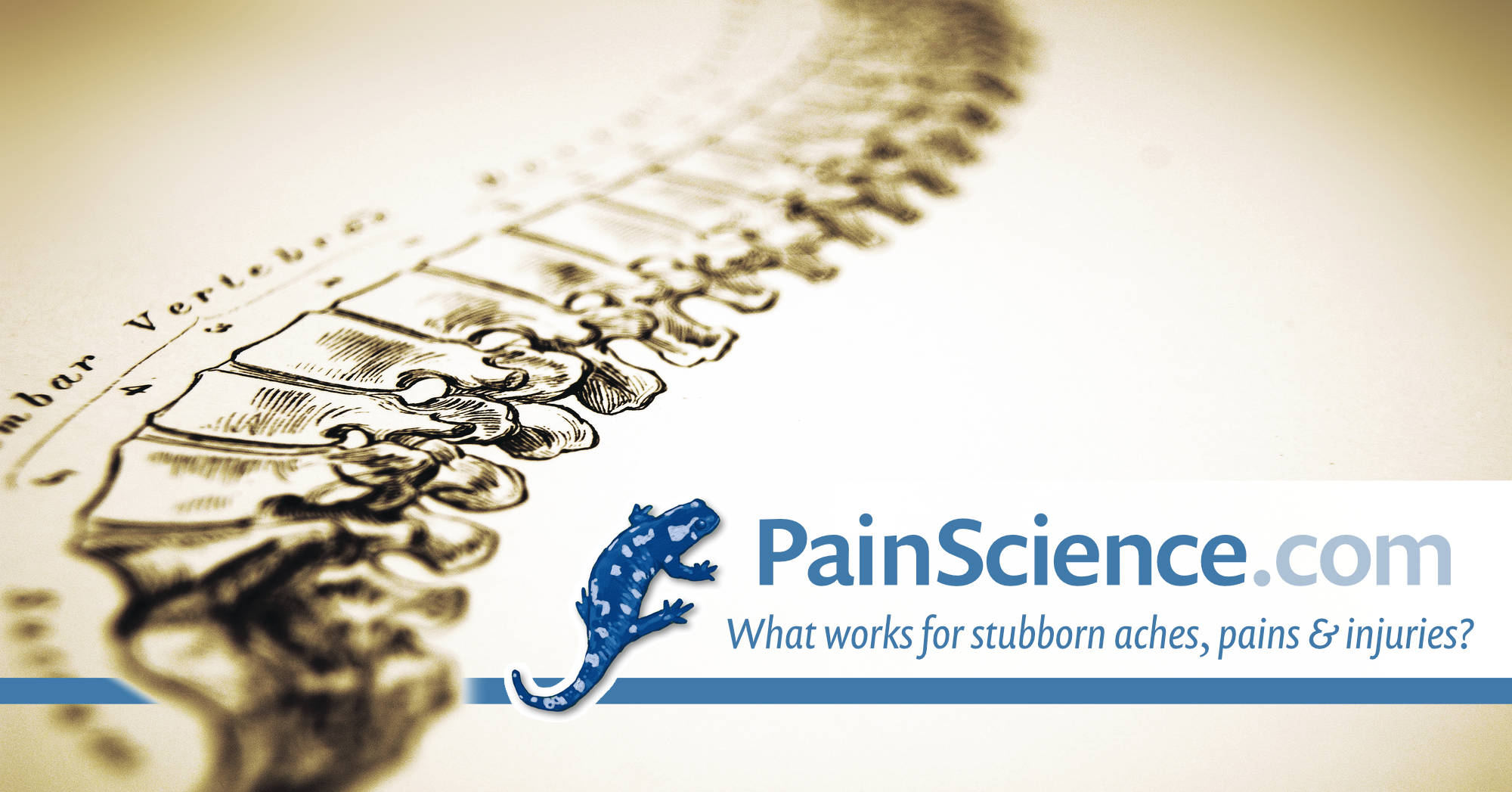 What works? What doesn't? Why? Rational reviews of treatment options, and many handy tips.