How do you get more fat?

Hi I’ve recently started doing zero carbs, I’m doing the steak challenge at the moment and just into week 2 but finding a little difficult to get my fats up as not many fatty cuts of meat available, what do you all suggest, I would like to continue eating zero carb in the future but I don’t feel as satiated as a did when I was eating normally under 10 carbs a day. I think it’s the protein, fat ratio I have wrong but as I said not sure how to add more fats in. Thanks in advance

Coconut oil added to chicken broth makes a nice, creamy (dairy free) soup to drink that gives plenty of fat (and salt) without increasing your protein (much, depending on how you made the broth). I like that but have also put butter and HWC into it, and, of course, you could not add the coconut oil and just use butter and HWC in the broth. You can also use tea or coffee instead of broth - but the broth does help with salt.

Thanks , good idea I need to find a good broth receipe I tried making it before from beef bones but it didn’t come out so well

How do you do ZERO carbs? Are you talking about net? What is the “steak challenge”? Add coconut oil, Kerry Gold butter, MCT oil, avocado oil and olive oil to just about anything. NOT ALL ONCE, LOL.

Great idea, but this is in the Zero Carb/Carnivore category. Zero Carb really means Zero Plants in this context, so coconut oil is out.

Also, if you can find an old-fashioned butcher, you may be able to order mince with 20 percent fat.

If you are having a hard time trying to increase your fat content in your meals, Ghee Hollandaise Sauce is very easy to make and can be added to just about anything (meat, fish, vegetables and eggs). It also makes a great dipping sauce for cold meats and raw vegetables. Hollandaise sauce is typically made with melted butter. But, this recipe uses ghee (clarified butter) instead, which results in a much fattier and richer end product. First start with putting raw egg yolk in a bowl. For each …

Actually, I am doing the steak challenge, too. And started feeling horrible and very hungry. It was a weird feeling. I couldn’t put another bite of steak in my mouth or else I’d puke, but was voraciously hungry. I also started to gain weight. I then went to the store and bought some vitamin and mineral supplements. To see if that would calm my hunger…and it worked. Not as voraciously hungry anymore. I also lost some of the weight I put on with the steak eating. I didn’t lose all the weight, but at least I didn’t continue to increase in weight. I’m really looking forward to the end on the steak challenge. I discovered that sticking to beef alone does not work for me at all, as it creates nutritional deficiencies. Zero carb does work for me, but when I get protein from a variety of sources. I never take vitamin and mineral supplements, but I had to start taking them with the month-long steak challenge. This tells me that it is not a nutritional way of eating at all for me, not even for short term therapy. It even made me put on some weight, and my clothes feel tighter. I now have to redo whatever happened to my body. I’m considering a one or two week fast to cancel the steak challenge effects.

Thank you, so it’s just not me… I’ll try the vitamins see if that helps I lost 6.6lbs in the first week into the second and I’ve put 1.8lb back on. I’m not at the stage of I can’t eat steak but I’m missing my bpc made with butter and cream that used to keep me going till mid afternoon. I’m just not getting enough fat in I’m double protein to fat and my body is not happy. I’m going to give it another week and then switch to zero carb I’ve ordered some 20%fat mince so I can make buttered cheese burgers.

Sounds to me like your not taking in enough fat. Steak is mostly protein, and as we know, too much protein is not good. If I may ask, why are you doing this “steak challenge”, and for what reason? I’ve not heard of it, and doesn’t make sense to me. Don’t get me wrong, I LOVE a good rib-eye. You are looking for a fattier cut, look for rib-eye cap steaks, and of course finish off with butter.

If you look at most of the steaks that @Brenda posts that have a 1" fat strip. She talked with her butcher to special order these cuts as most people prefer the lean versions. You will have to shop around as some large markets only get beef that is already trimmed of the fat. A local butcher shop may be a good prospect.

Thanks, I’ve asked at my local butchers and they won’t cut them like that, apparently there just isn’t the need for them around here. People like lean.

Ve started cooking them in lard to try and get the extra fat that way and it seems to be helping with the hunger so far.

How do you do ZERO carbs? Are you talking about net? What is the “steak challenge”

"ZC"or Zero Carb is a way of eating that eliminates all plant foods, including plant oils. Because of no plants, it is nearly always zero carbohydrate.

The “30 Day Steak Challenge” is on this forum and is an experiment. Learn more about it HERE:

As an experiment to further disprove the notion of calories in/calories out and that a lack of carbohydrate will result in death and untimely weight gain (i.e., conventional BS), the indomitable @Brenda Zorn and myself are going to start a 30-day Steak Challenge at the end of February. The Rules: You must eat only steak only for 30 days. Water and coffee only, preferably. I will send 1 cute brain sticker to successful challenge participants. Simple enough, yes? Comrades, feel free to join …

I’ve asked at my local butchers and they won’t cut them like that,

You’ll have special order it and give them time to get one in and cut it.

Tell them you want NY strip, Tbone, Porterhouse, or ribeye, cut from the primal, with the fat cap left on.

Untrimmed. You’ll have to find someone who is willing to communicate with you. I have also found arrogant assholes who scoff at me.

Any large grocer gets in whole primal.
Looks like they already trimmed the shit out of it but here is a whole NY strip primal: 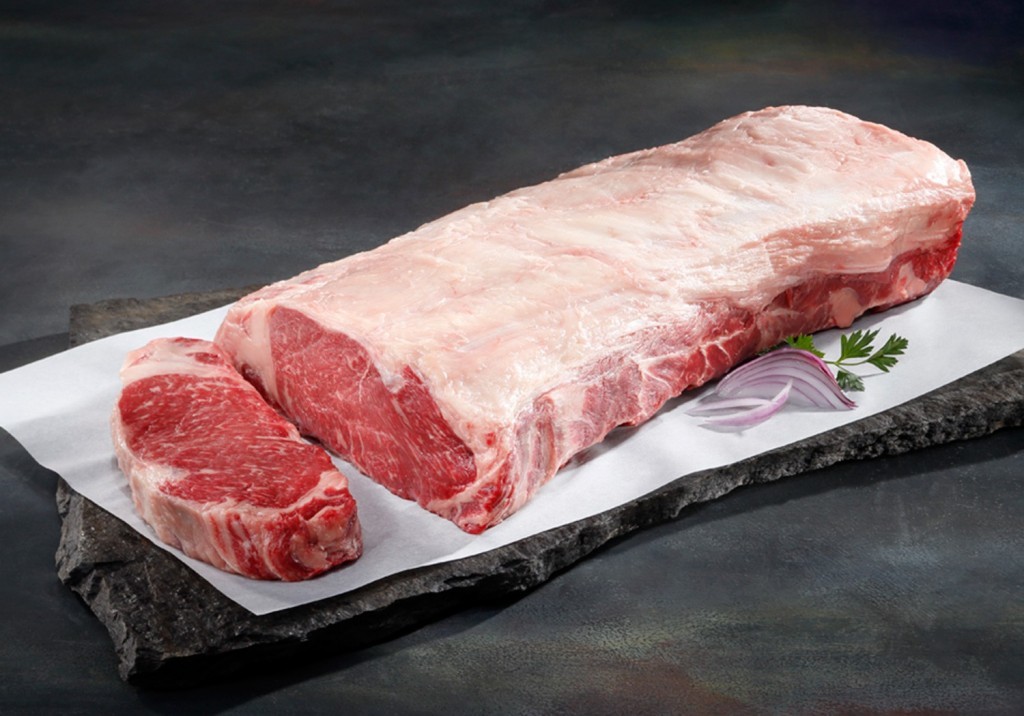 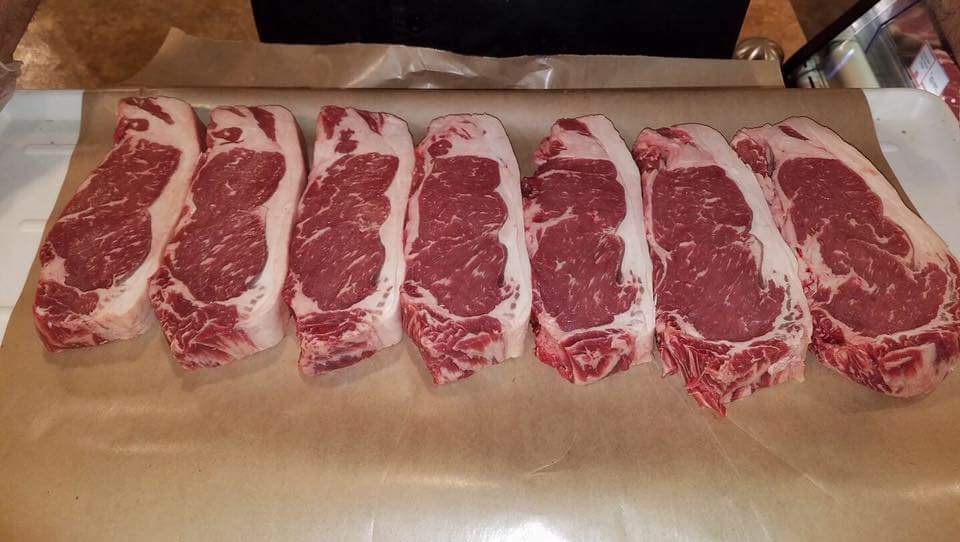 Also, be smart and order them when that particular cut is on sale that week.

I loved doing the challenge but I too put on weight and at times get ridiculously hungry, even tho I was eating, at times, 1+ lbs of ribeye or tbones or NY Strips… LOVED the meat… and with how I am at the gym, figured it would work great but didn’t. it did teach me that I don’t need that amount of protein. my BG was all over the board (and I’m not diabetic even a little). So as much as I liked it, it’s not for me either

Well, it was not the protein that affected me. It was that it was a single source protein. I’m okay if I get to rotate between fish, seafood, lamb, chicken, pork, beef…etc. The rotation ensures a variety in nutrition, which then sends the signal to my body that I’m getting the nutrition I need. If I eat the same protein source everyday, I fall behind on some nutrients, and then my body thinks a nutrient starvation is happening. This encourages weight gain. This is why I started taking vitamins, to overcome that phenomenon. Just like what Megan Ramos says, changing it up is a good thing.

Many days you might need to eat 2+# of meat to satisfy your hunger depending on how your activity level is. Go to your local restaurant supply store, meat packer or Costco, buy whole ribeye or strip loin, cut your own steaks untrimmed and eat the fat first until you want no more, then eat the lean until you want no more. Also look into 73/27 ground beef, lots of good fat renders out of it, cook it in a cast iron skillet and add all the renderings to the plate or cook your eggs in it, they soak up fat quite nicely!

Dr. Szofia Clemens recommends a fat/protein ratio of 2:1. Perhaps this would help and also a minimum 400g of liver/week and 200g of brain or bone marrow/week. She also mentions the average male should get approx. 50-60 grams of protein per day.