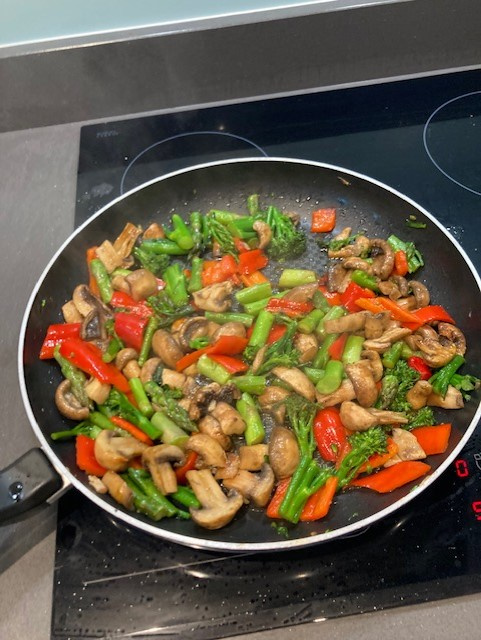 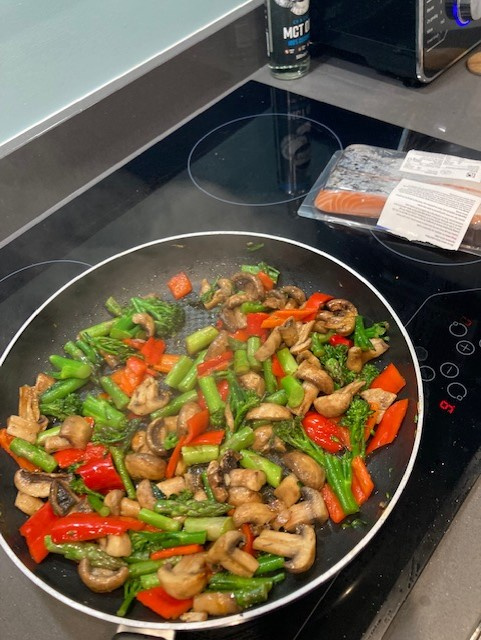 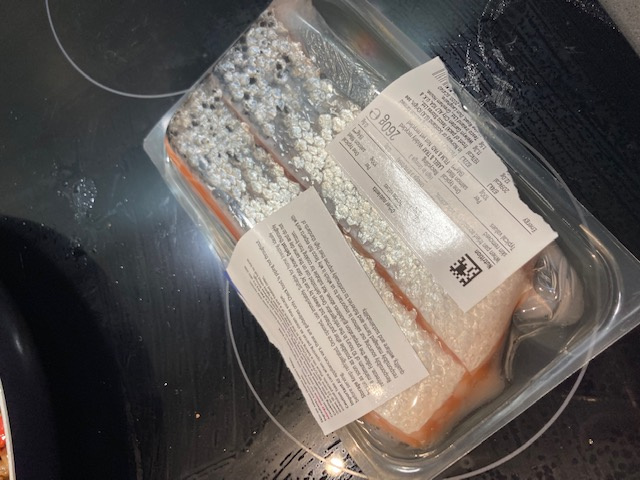 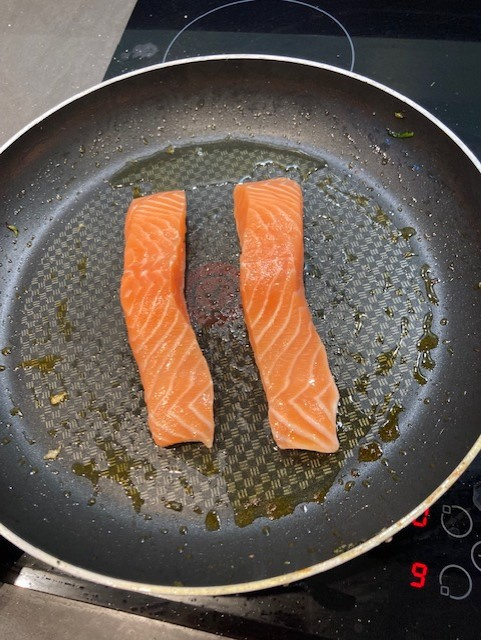 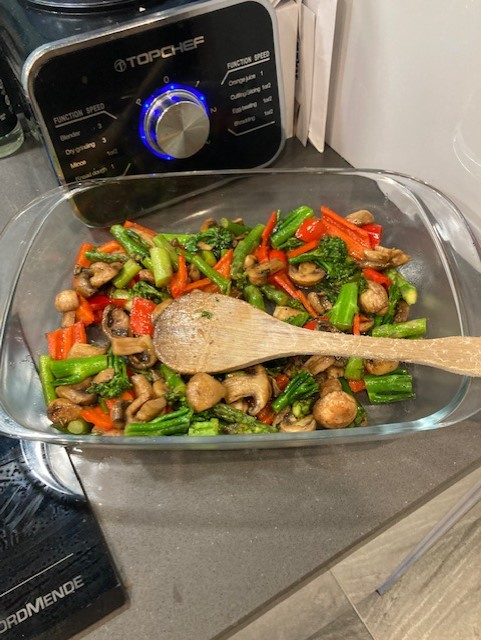 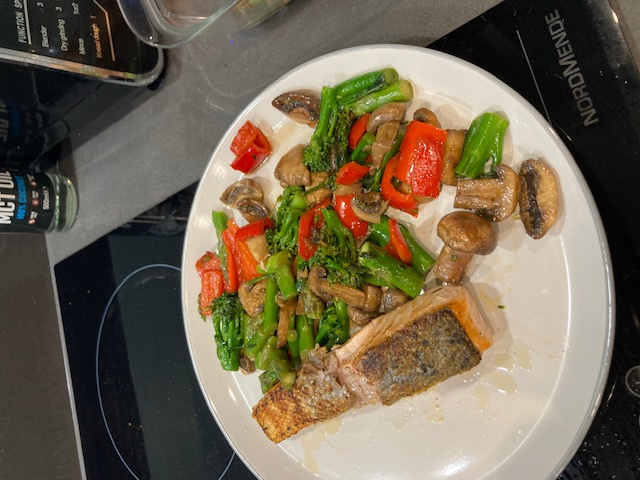 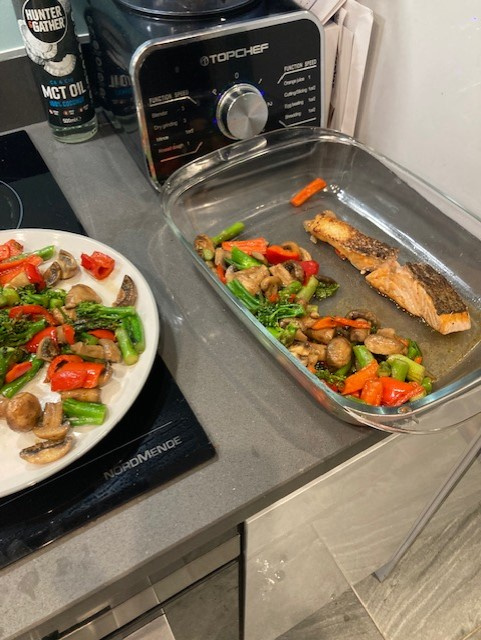 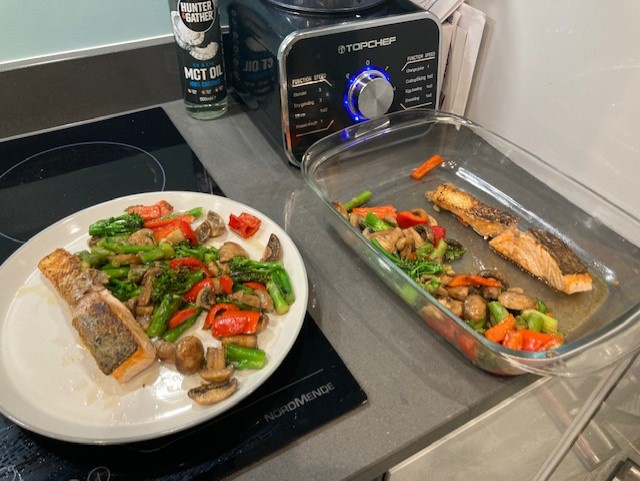 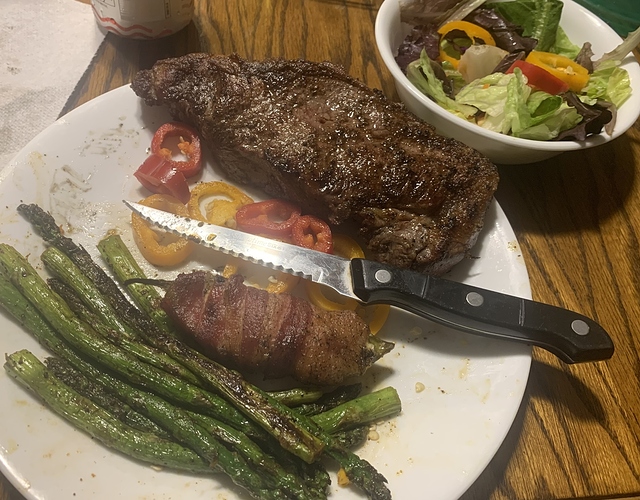 Lordy, that’s a good lookin’ date on a plate!

I prefer that to my salmon, any day of the week! 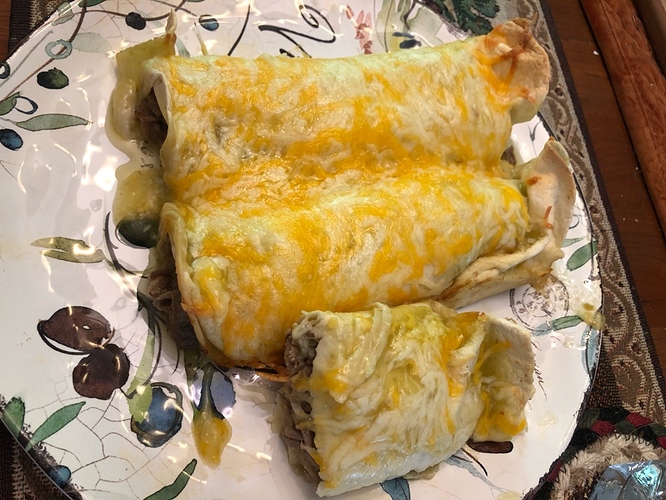 Every time I smoke a pork butt I make these.

Chick roast sous vide at 135 F for 40 hrs then thrown on the grill to brown the outside. Fork tender.

Asparagus and the first radishes from the garden- coated with olive oil and roasted. 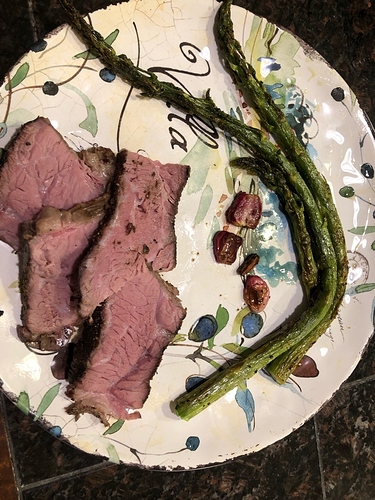 I ate 30g bacon today. I could eat a tad more but that’s it

But I had various nice things. The sauce on the meat (a pound of pork chop. I realized a pound of meat is a cute amount for me for my first meal but this time I ate too early and couldn’t finish it) isn’t carnivore but probably soon will be… Or almost. Vegs just don’t add much to it. The original has way more carrots, onions, even a bit flour and sweetener, it’s a very common sauce but exotic to me as Mom never did and I ate it very rarely in my life. And it requires meat, we tried it with mushrooms, nope. Alvaro always makes it with rabbit but pork cubes are better as I won’t need to eat a bony rabbit part dropping with sauce… And my ratios are more to my liking, less water, less carbs… This is a heavily sour cream and mustard based sauce (unless one overdo the carrots… I obviously don’t but I really will skip them next time. I planned that but IDK, they somehow find their way into it in a small amount. I am not in the mood to be very strict right now).

[…]
Meanwhile a day passed, I can be super lazy and forgetful if it’s about bringing the CF card of the camera upstairs. 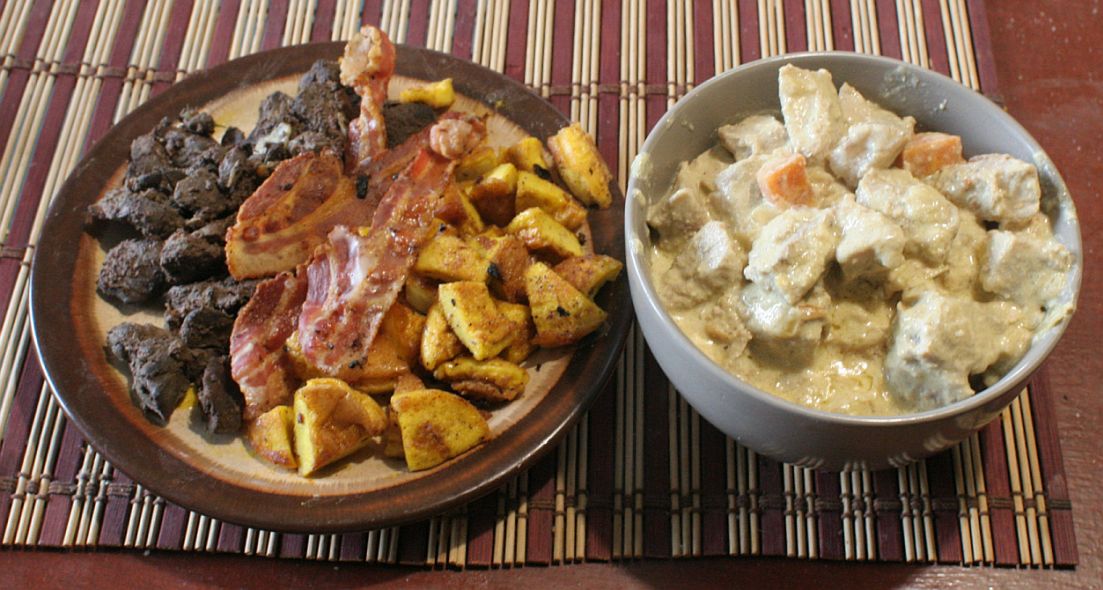 I think this was the first meal yesterday except I only ate half of the dish in the bowl…
The yellow things are failed (not fluffy) sponge cake bottoms (basically omelet made in the oven) fried in lard. They were fine that way. They are horrible as “sponge cake”. As they aren’t sponge-y at all. I did an experiment and now I know what I should and shouldn’t do, no regrets.
The blackish one is fried chicken liver (with some onions this time, trying to make it more tempting. I don’t want to give up chicken liver, it adds variety… and I liked it for long).

Today I had bacon covered pork chops but I ate them up before a photo. Oh well, I have photos from the past and they are way prettier (those were pork thigh pieces though, I made it with pork chop first time).

A batch of both beef and pork butcher’s sausages, baked in the oven, for the fridge nibbles. 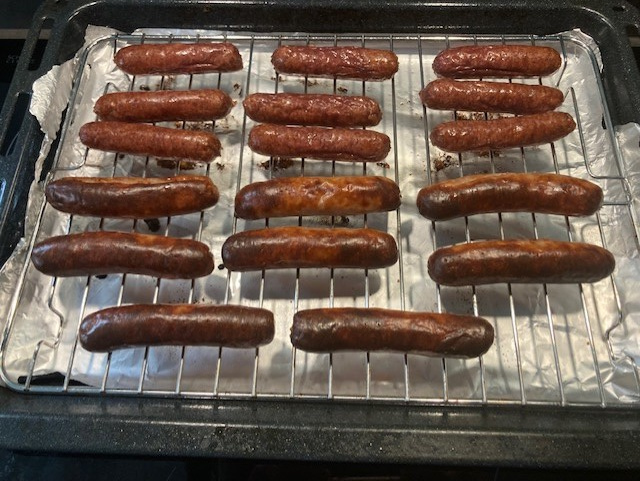 For brunch, I had 2 beef and 2 pork sausages, along with scrambled eggs with green jalepenos and spring onion mixed through. Sprinled with smoked paprika, salt & pepper, and the ketchup is no added sugar. Thanks for reminding me of jalepenos Bob! Spicy and sharp scrambled egg. 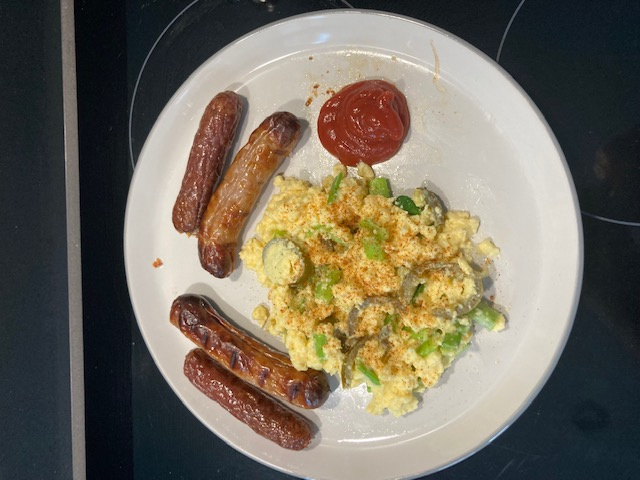 My absolute fave fridge nibbles. (stealing that phrase, thanks.)

For tonight, picked up these ribeye steak burgers (no, I’ve never heard that before either!) for a bargain price (not the price on the packaging!), as the use by date is today. I’m going to combine with mushrooms and peppers in some form, perhaps within one or two of these low carb high protein tortilla wraps with butter or mayonaise. Or I have some curry paste… 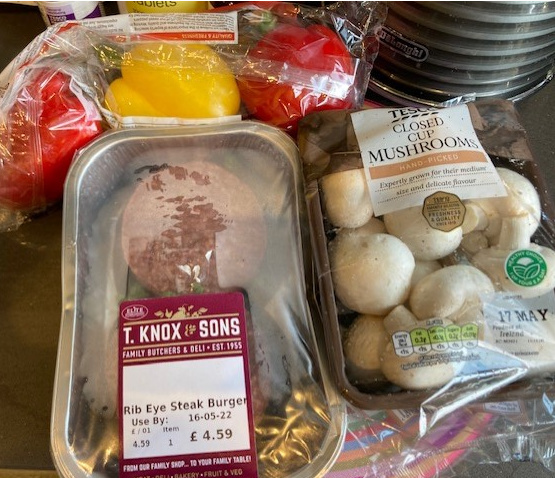 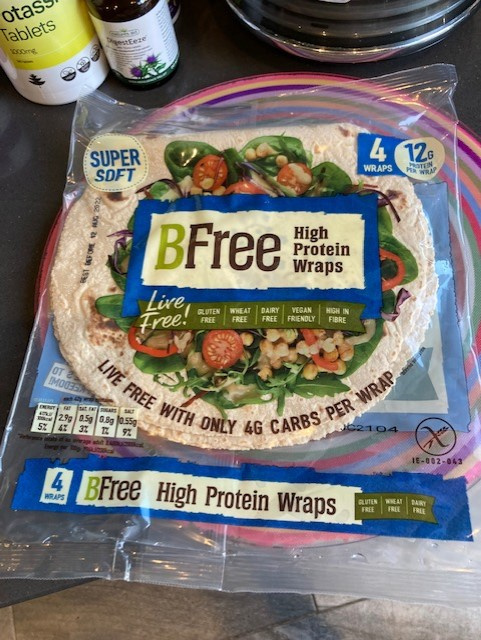 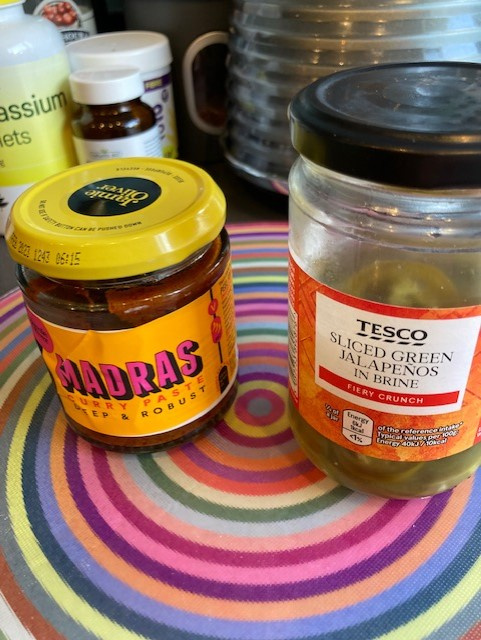