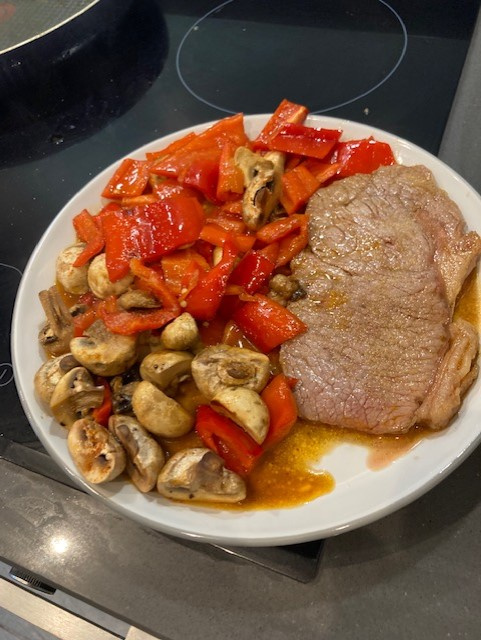 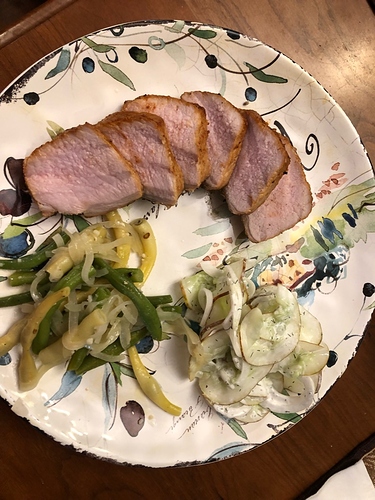 I’d probably need a bit more on the plate though, if doing OMAD- but I’m sure it was delicious!

I’m a bit predictable at the moment.

I got more sausages to cook for the fridge, my pup and I.
And I got another sirloin, red peppers, mushrooms…but I got some tenderstem broccolli too.
I’m finding stir frying so quick and easy at present, it’s stopping me experimenting.
I’ll add different seasoning to mix things up though.
And I’ll use the sausages in protein wraps with various combinations. 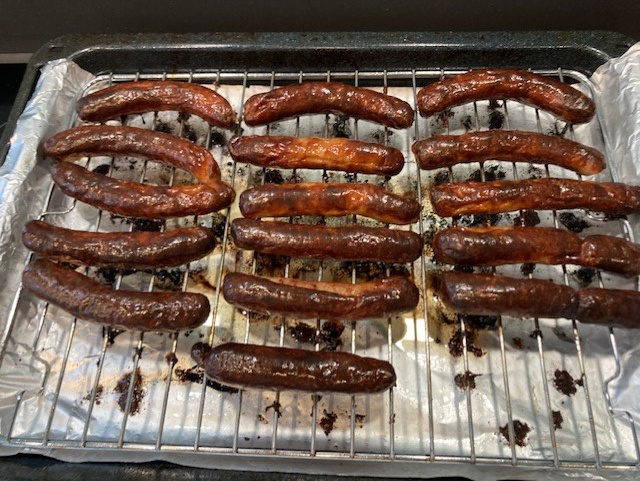 Before and after, sorry!
Well, enjoy. 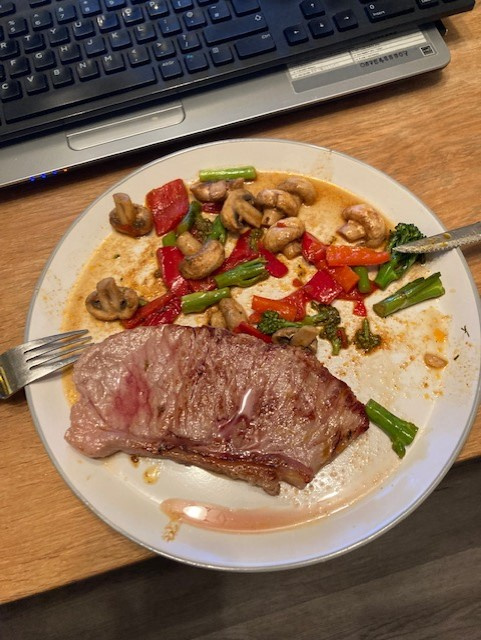 We do 2MAD so that is usually enough for a meal for my 155-lb hubby. But if not, there is usually more on the stove. Less for the pupper, though. Ella is well-fed! I can’t afford to feed her an all-meat diet at 90+ lbs but she gets expensive grain-free duck and potato dried food. She rips and runs in the meadow several times a day so very fit. Our last run to Tractor Supply for dog and cat food was $78. Ouchie. For a 30-lb bag of dried dog food and a 7-lb bag of cat food.

At least the chicken feed and scratch is still cheap!

Wasn’t here since ages as I tend to comment but I never have a photo. I lost 2 somehow (we use many CF cards in the camera and we both change them frequently) and I forgot to make one yesterday, it happens when I am hungry… I even made the whole plate but then I started to eat not noticing I wanted to shot it… Oh well. It was nothing special anyway.

This is mainly for Shinita, she always wonders how her pork chops could be more palatable for her.

Thanks! I don’t think I want to eat pork chop, I don’t ever need it. I pretty much avoid it since I realized it’s not for me… But sometimes, once in a few months we buy some and I may taste it. No problem, I always can put some pork chuck next to it when I roast it for my SO. He likes pork chop very much for some reason. But he is fine with anything so unless there is a very good reason, we don’t buy pork chop. But sometimes it’s on a good sale, a hypermarket tends to sell it in 4kg slabs with minimal plastic and anyway, Alvaro likes it so sometimes he should eat it

But yes, looking at your colorful dishes I actually wondered if we should make something like that one day. We never did such things, more like curry and stew… I don’t cook vegetables but my SO does so he will do it one weekend if he likes the idea. Not this weekend as we have too many things in boxes for curry in the freezer at this point, the fish will be nice in it too… I need more space in the tiny freezer.
I may even taste it but I eat roasts (pork and salt, just perfect. needs the right cuts of course, today it’s pork chuck and green ham if it’s really how pork thigh is in English. how the latter pull it off I still don’t get, it is pretty lean but doesn’t feel lean…? I find it very similar to pork chuck, a leaner piece), even stews aren’t carnivore but I will eat them occasionally, they are nice and only have a little onion (some people use 10 times as much but it would be horribly sweet to me).

Now that it’s so hot, I don’t often roast for hours, I like fried pork just fine. But it’s even more sensitive to fatness and even freshness. I have maybe 5 days old fried pork now and it’s not that tempting since days. But I will finish it today. It’s okay but not tempting for some reason. I do very low-meat carni days (+fruit. inevitable, I have very many fruit seasons right now, the very end for most of it, I planned to stop but well, fruit!) now. It’s fine for now but eventually it causes problems (or just eating a ton of meat at one night but I can call it a tiny problem).

I just remembered I actually have a photo to show! We ate this in the weekend. Smoked mackerel and very, very, very good. A bit too salty but no one told me I have to eat it alone.

Nice! I will love that plate forever

But I actually praised the look of the meat. I have no idea what pork tenderloin is like and it probably will stay so. It’s some expensive lean cut I think so I probably wouldn’t like it much…?
Maybe one day I will be adventurous and try out more things. But the nuances probably would be lost on it. They surely were when I ate the piglet but maybe it’s normal there…? Poor thing barely had meat, it was all skin (super crunchy skin, it was amazing), bones and especially FAT. It was great just too fatty, Alvaro obviously went as lean as he could so all the fat was mine. One day we should buy a bigger piglet but we were worried about the pitiful size of our freezer.
I still don’t understand. The piglet should grow, why it put so much fat on itself at that early point? Oh well.

Yes- I spend practically a fortune on Carly.

She gets a mixture of dried complete dog meal, but also a couple of pouches of ‘wet’ jelly dog meat each day. She also gets two ‘dental’ dog chews each day to keep her knashers sparkly white- they are not cheap.

But to be honest, the toys and treats like duck ‘jerky’ etc. can all add up too. But she’s worth it! 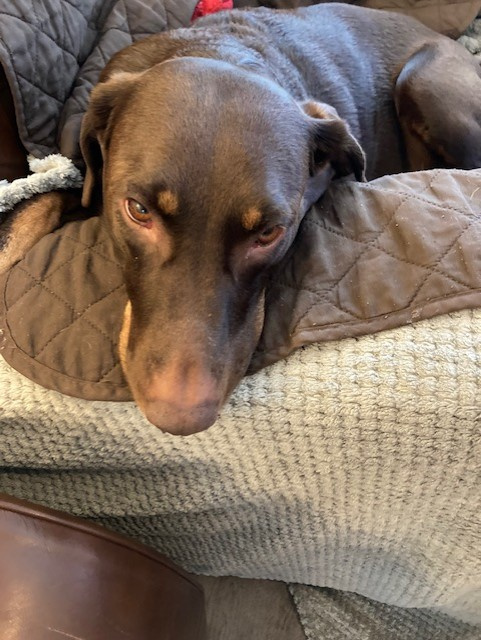 So far today…I was ravenous. So at about 10:30 am I had the following: 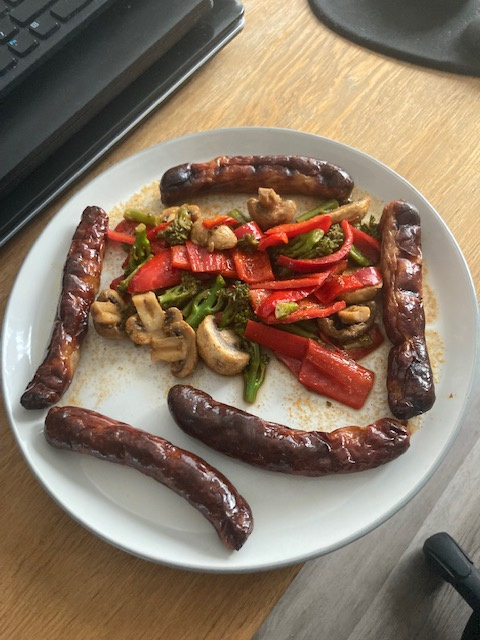 The fridge nibble sausages with last night’s stir fied veg.
Looking back, I should have sprinkled with grated cheddar before heating, then a bit of hard cheese as well. Too eager to eat today. I have some meatballs for tonight…

Meanwhile our cats cost very little even now when cat food prices went up… I can’t be thankful enough for that. It’s nice to have them around.

I have photos. Not nice ones but I was pretty good at eating almost exactly what is on them. 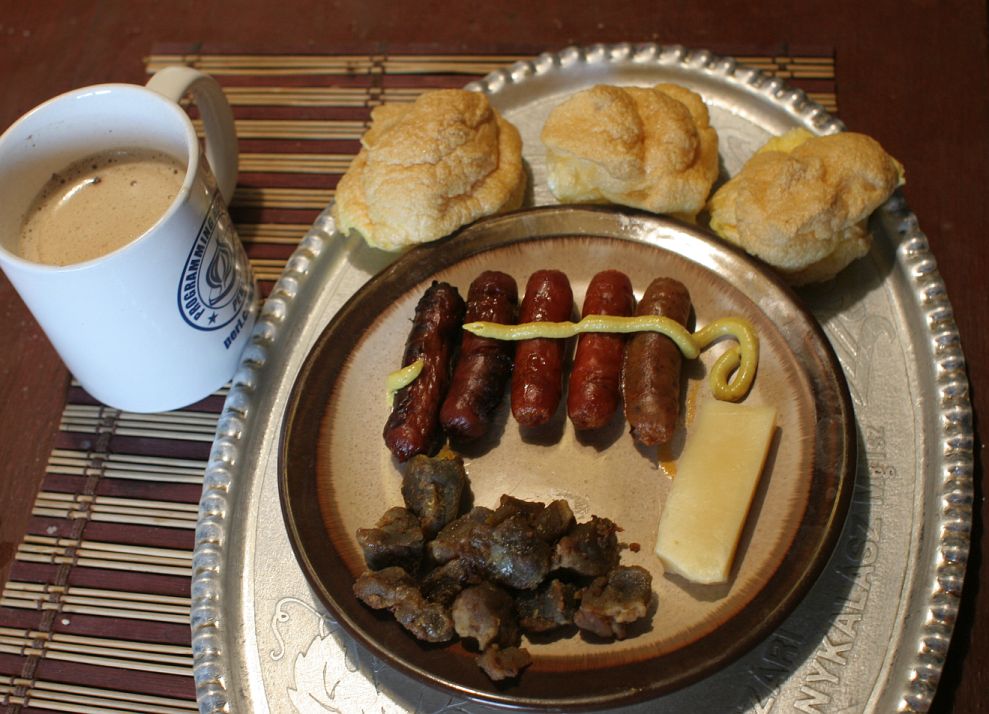 After low-meat days I finally went over 500g meat today. Tiny grill sausages and pork chuck roast (the second pic has brisket I didn’t eat after the tender fatty wonderfulness pork chuck roast is but I was almost completely satiated at that point).

Very nice TMAD day, sometimes I can do that.

I love the wee spots of ketchup on the eggs!

Last night’s ingredients. Meatballs in herb and tomato sauce main course, which I spiced up to make hotter. 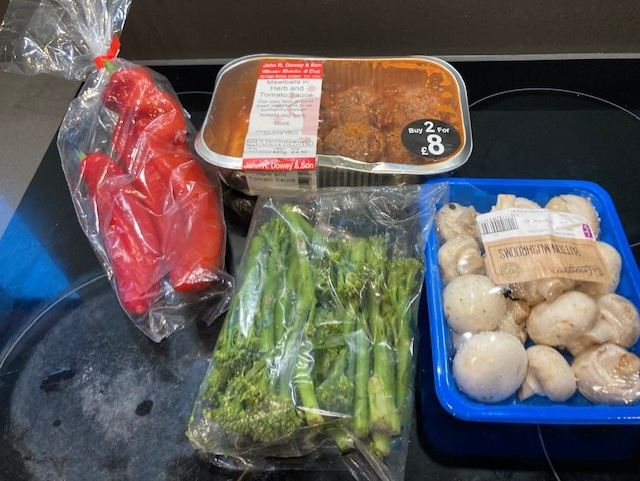 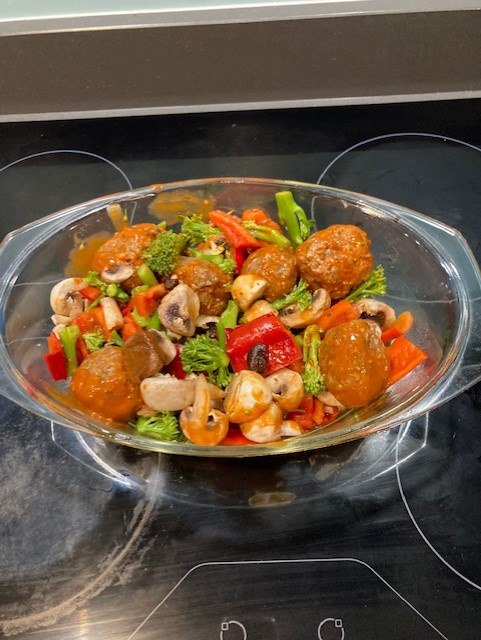 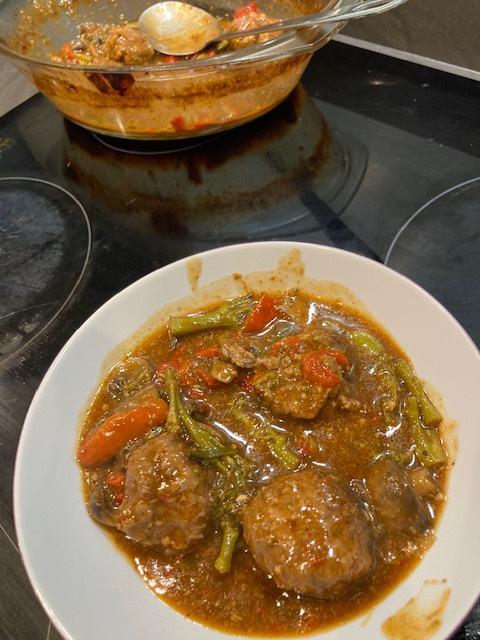 Unusually, I’m going for 3 meals today (food that needs eaten or i’ll have to toss it…I’ll share with Carly though).
Late breakfast (scrambled egg had grated cheddar and butter in it, the ketchup is no added sugar): 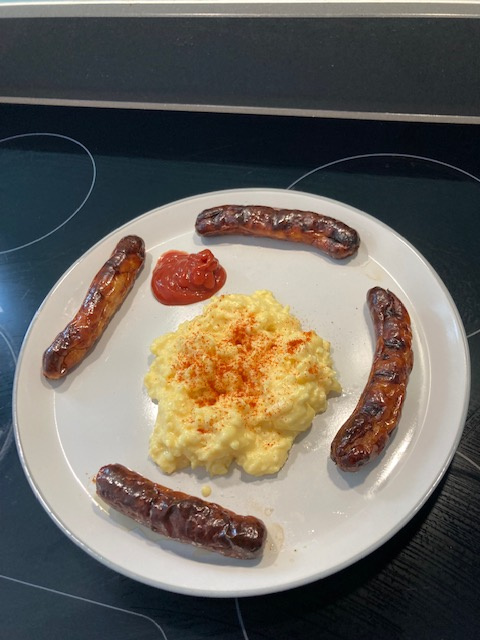 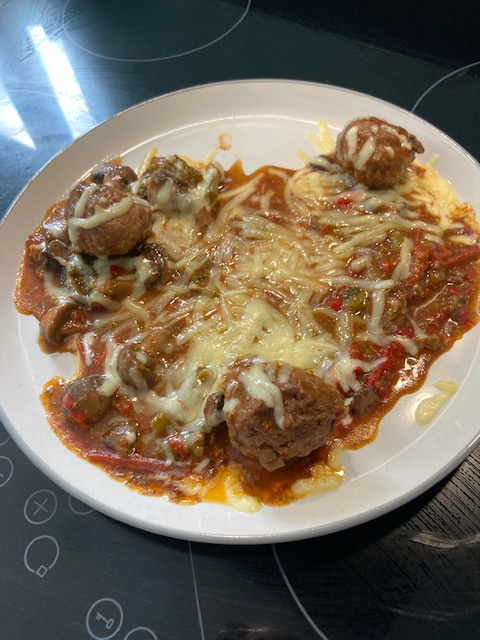 Tonight’s ingredients (the yellow labels show what produce I got half price :-D): 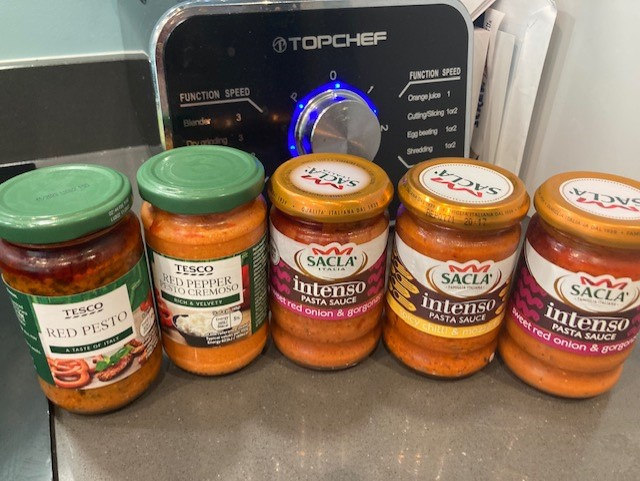 This one. And this other one…and a spoon or two of English mustard. 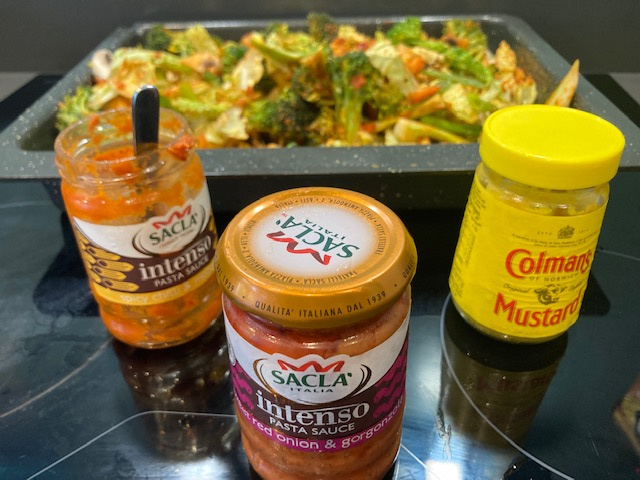 I was going to fry the chops, but ended up just bunging them in with the oven roasted veg. 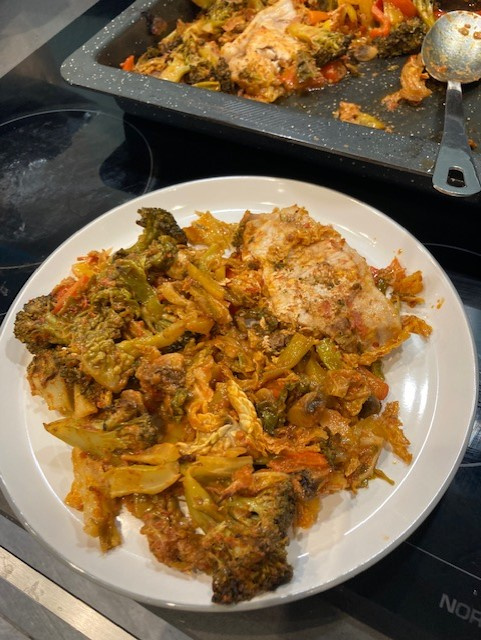 Then got countered again!

The zucchini, tomatoes, cucumbers and onion all came from my garden.