That’s it, job done- two differing flavours of roast veg and bacon batched up, ready to be sealed and put in the fridge. I’ll just take a scoop out of them when needed and heat in the microwave.
Probably last for 3 or 4 days in the refrigerator when sealed up. 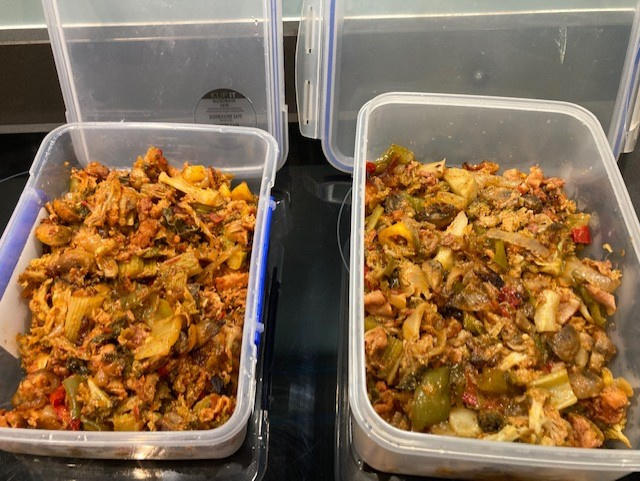 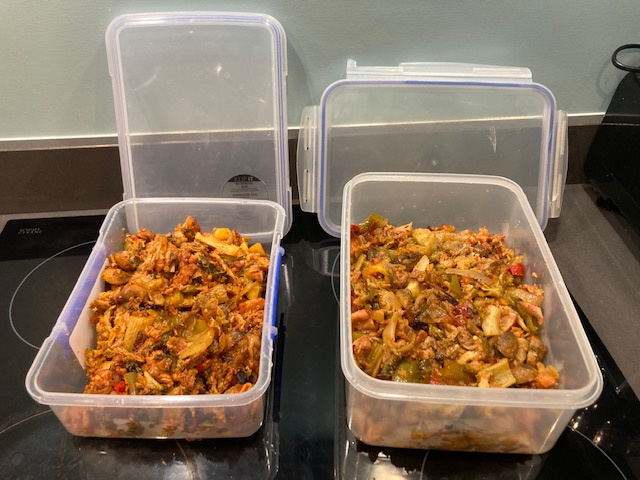 Zucchini from the garden, spiralized and cooked in ghee with onions and garlic and seasoned with curry powder.

Instant Pot baby back ribs finished on the grill.

Avocado with a splash of soy sauce 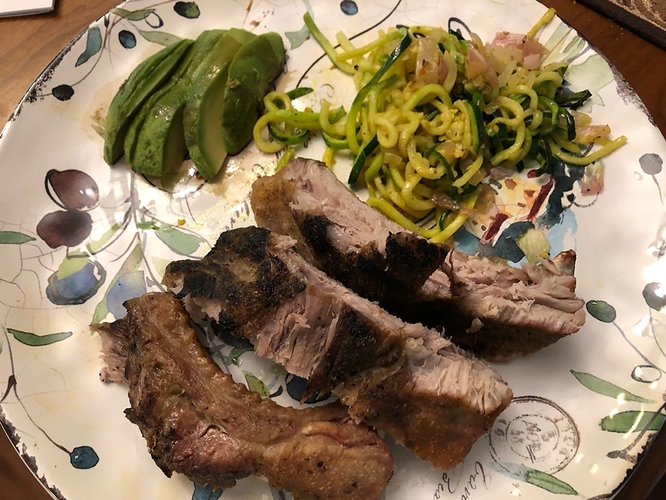 Game changer here!
Possible new favourite dish.
If this was accompanying some lamb’s liver I’d be in ectasy.
Tastes great chilled, but I’ve heated a few scoops of both flavours up and melted some grated cheddar over it. 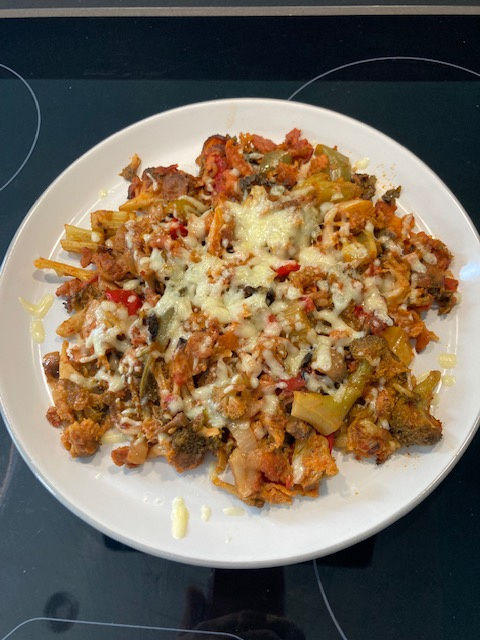 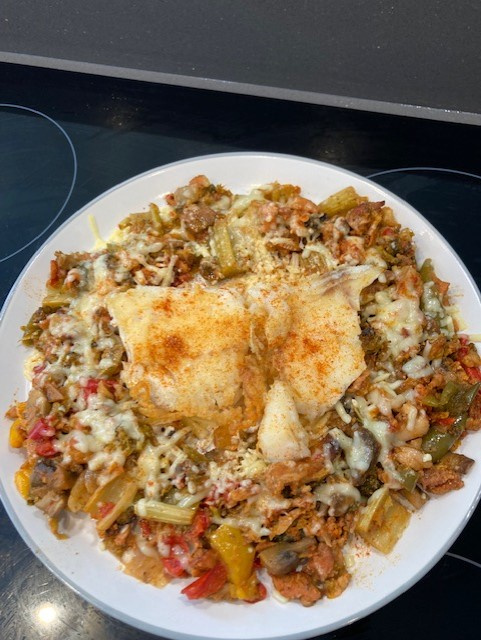 Yellow squash from the garden steamed with onions, drainer then added butter, cream, salt and Parmesan cheese. Was yummy 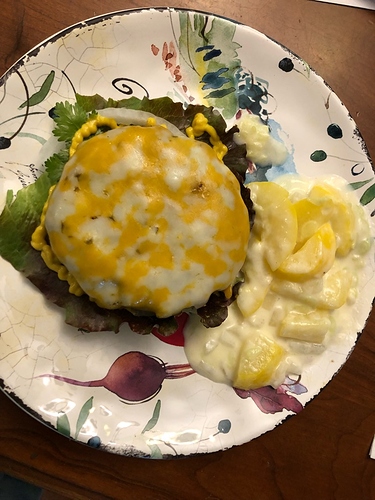 It looks yummy too!

I ended up donating some of the batched bacon pesto roast veg to my mum, because I’m such a good son. 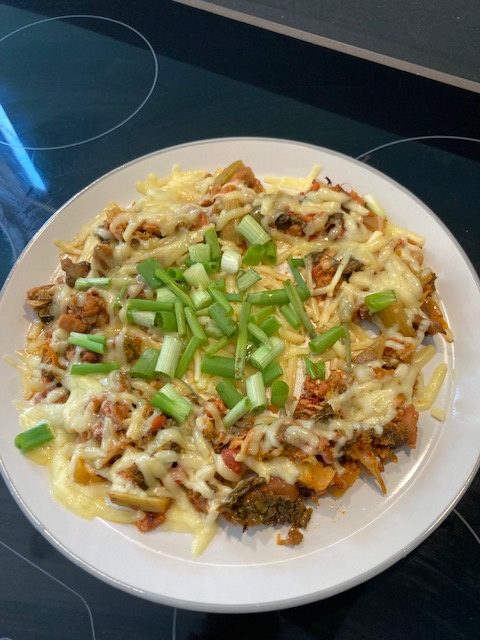 Got 4 packs of prime butcher’s sausages today, half price with a day use by date to go.
3 packs of beef, and 1 of pork.
Gonna freeze 1 pork and 1 beef, and bake 2 beef for tonight (yay, lazy Keto!) for me, pup and perhaps a couple of fridge nibbles if we don’t scoff them all.

Beef bangers cooked…just chill the rest of the evening now. Turn the phone off, and bliss! 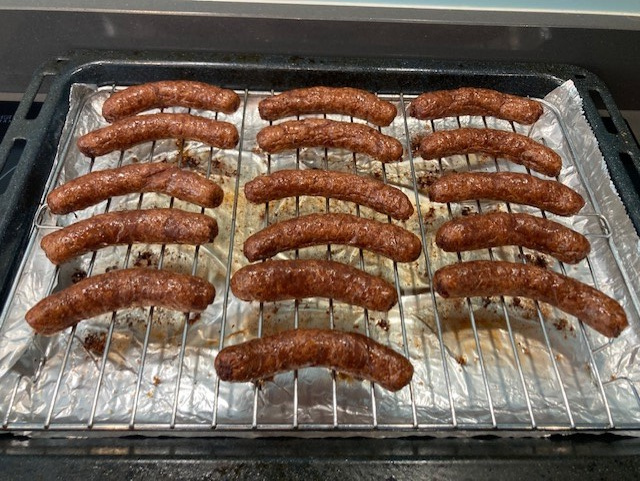 The planned start of my OMAD meal… I left a lot and ended up with TMAD.
Egg pudding (I used broth in it as nearly always), fried hake fish with various spices and soy sauce to make it borderline edible (why I try to eat it I am not sure

I like the texture, it’s just tasteless a bit but this treatment makes even seitan tasty and I usually have no problem to eat a small amount for variety, the same for liver. maybe using liver AND hake at the same time wasn’t the best idea?), fried chicken liver and scrambled eggs with sausage. Later I put sour cream on top. 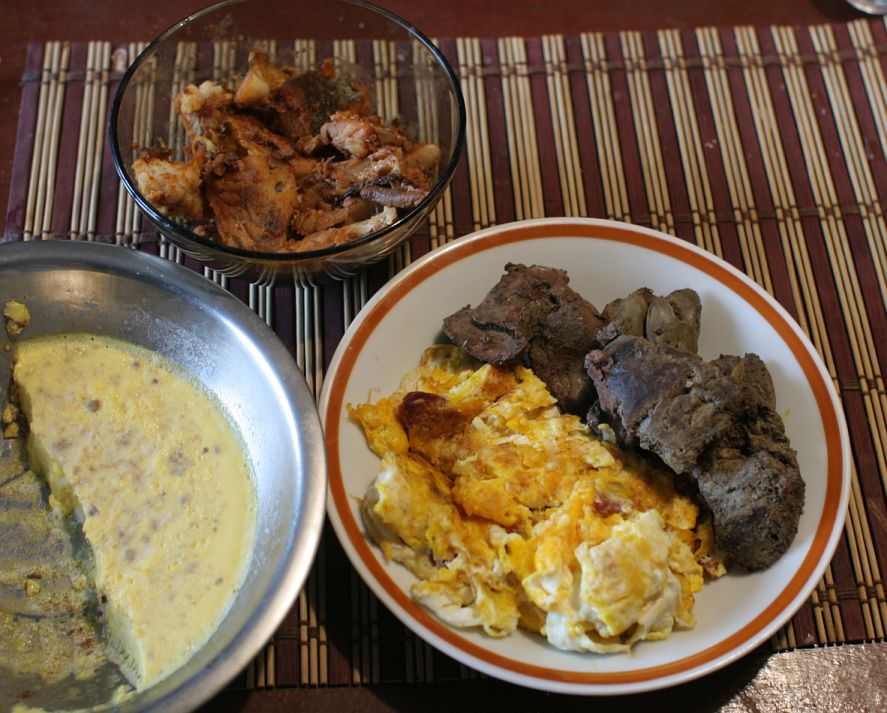 My last meat was too fatty and I desired something leaner. I just don’t like leaner meats so much. Or scrambled eggs at this point.
The egg pudding was enjoyable and I ate sponge cakes with a little sausage, impossible not to like those!

And later a little pork roast, the leaner kind of the two I currently have. I had appetite problems but in the end I ate (more than?) enough. Nope, it’s fine for a workout day even though I did half a workout, no walk and I was weak as a kitten, again, I use smaller weights than 1-2 month ago… I skipped too many workouts due to low energy and not the right mood.

Peruvian chicken and garden squash cooked with garden tomatoes from a couple of years ago put up in my freezer with onions, butter and Parmesan cheese 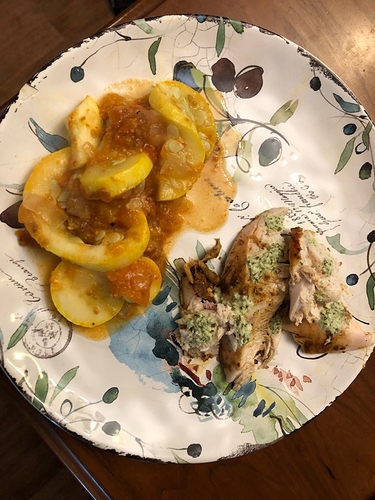 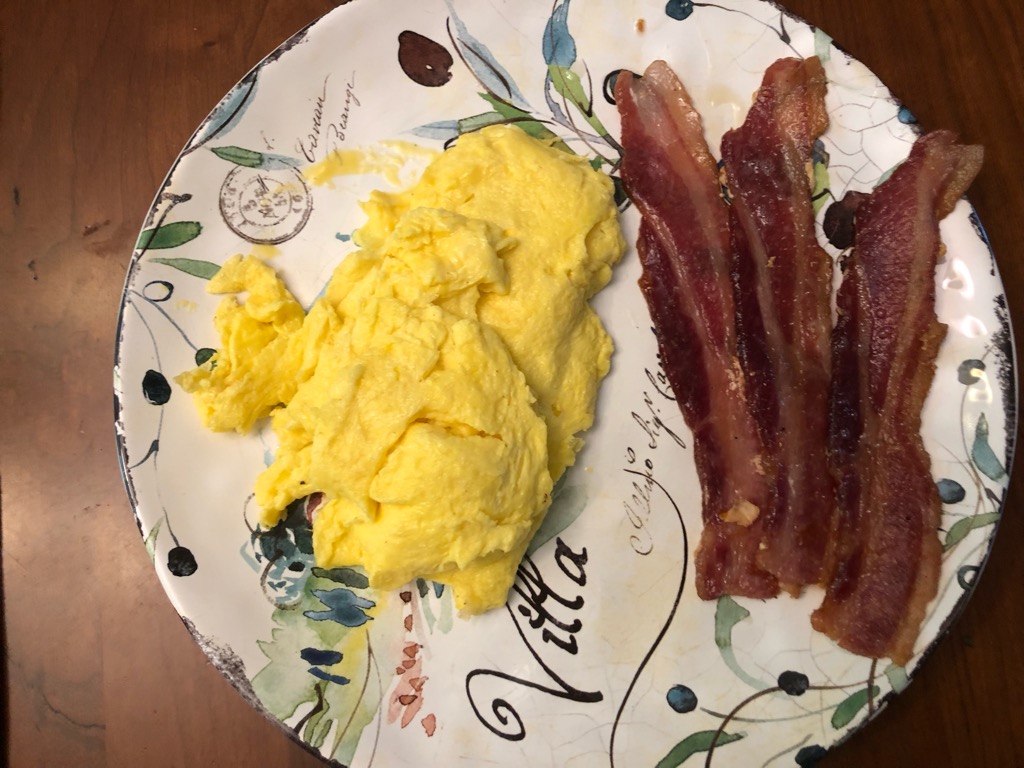 Breakfast for any meal!

Burger King. Better than the hospital cafeteria! Hubby’s blood pressure was elevated even doubting his meds and when he started having chest pain I drove him to the emergency room last night. After a few tests they admitted him for more tests today. 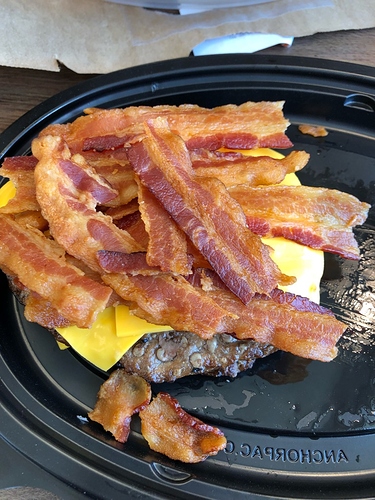 Hope your hubby is OK 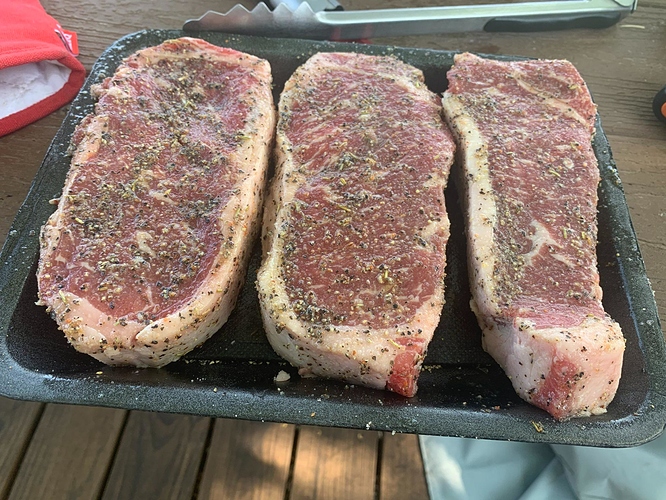 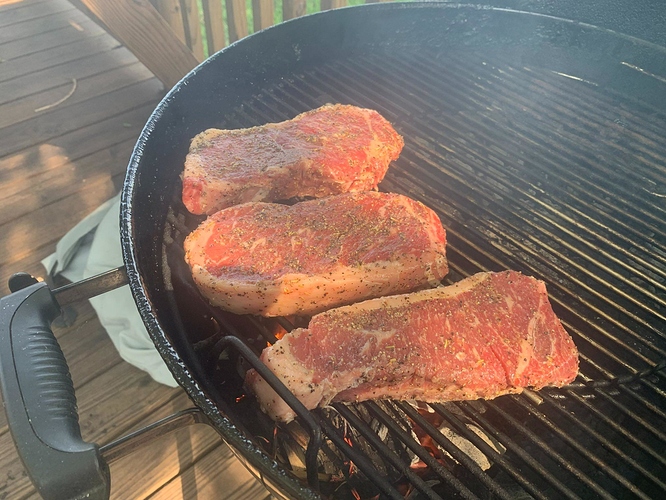 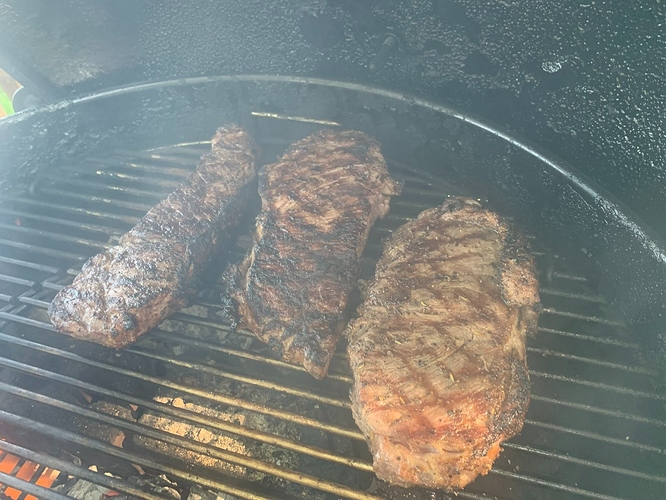 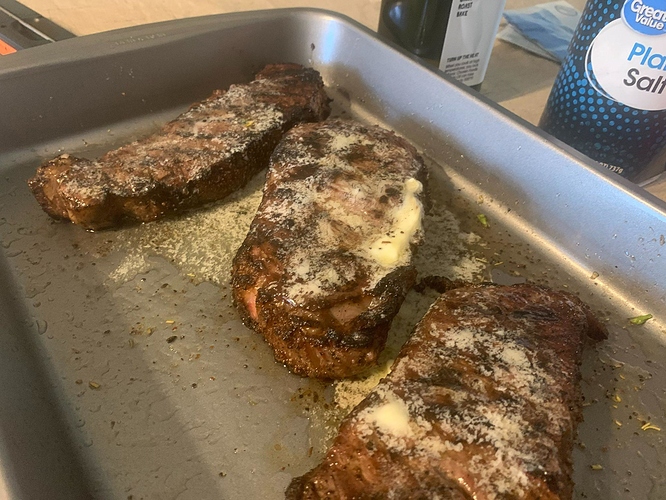 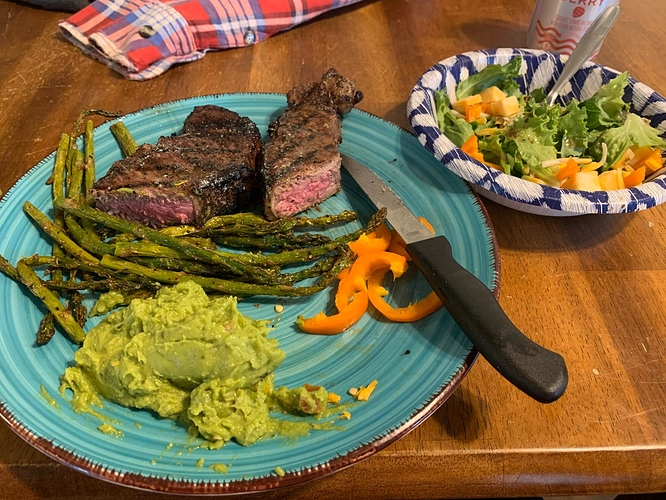 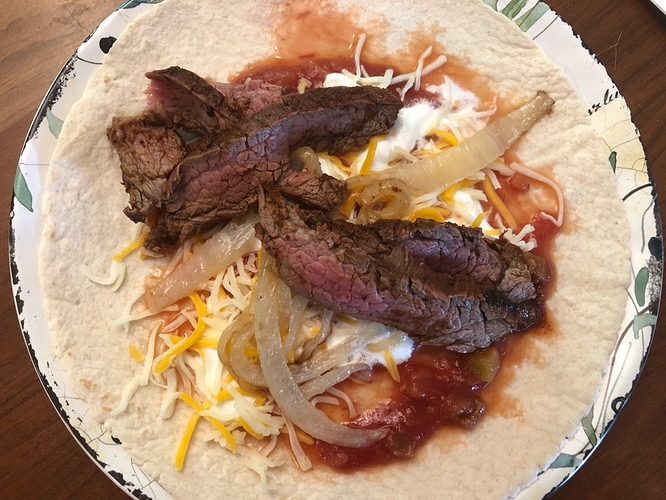