What Are People's Thoughts On The Croissant Diet?

Before anyone jumps up, this isn’t about working in zero carb croissants, but potentially getting better results from raising stearic acid content in carnivore. Crossaints are the bomb though.

The general idea is that stearic acid causes localised insulin resistance through ROS signalling in stomach fat, while also increasing satiety signalling through the same mechanism.

Unsaturated fats, on the other hand, don’t produce this signal. So the strategy here would be to prioritise stearic acid / saturated fats, while decreasing unsaturated / omega 6 fats.

Or, you could raise the Omega 3 to 6 ratio to get a similar effect. Which means less bacon and more expensive beef.

Obviously stearic acid should already be quite high on carnivore, but perhaps it could be increased even more by adding extra sticks of butter and tallow.

Just curious to hear anyone’s thoughts. There’s a podcast below where one of the proponents explains the concept.

Already been there done that.

I have found reading this very thought-provoking. Not sure how to test it myself, short of just adding more cocoa butter or stearic acid to my food – and ingesting more saturated and less monounsaturated fats – and then wildly guessing that a positive result is somehow more positive than it might have been otherwise. But it seems like IF it’s valid, this would be a HUGE confounder related to fat gain and fat loss. Fire in a Bottle: Humans as Oxidative Vessels The ROS Theory of Obesity from B…

OK, Maybe I’m being a judge-y asshole here, I’m going to listen to this later because it’s interesting and breakfast sandwich’s on croissants sounds awesome, but the guest talking about this has a ton of bodyfat to loose. Does that only bother me? It’s like when I watch supplement or workout vids and they’re telling you “DON’T do this” which would be exactly how I do things, and you “have to do this for results” and yet I look way better than them. In my mind that always puts a huge burden of proof into the mix for their claims for me.

No I like your point, you’d want to see some evidence that it does anything special. It’s like the low protein advocates being super skinny.

I’m happy to try this theory myself in the meantime and see what it does for satiety levels, because I’ve been dealing with heightened cravings since I wrapped my last fat-loss season. But butter doesn’t seem to agree with me, so I’ll probably try beef tallow. No harm in a n=1.

I tested super high saturated fat, and to me, it does work. I get MUCH less hungry. So not hungry that I could not eat high saturated fat if we were going to go out to eat (back when we did that), as I COULD NOT eat.

I tested both high saturated fat with low carb and also a targeted keto diet (TKD), where I would have some carbs the first meal after exercising. I believe that all the carbs do (say, sweet potato), in terms of the saturated fat diet, is provide something that sucks up fat. In other words, regardless of how you get high saturated fat, via just eating the fat, or via carbs, it didn’t seem to make a difference.

The TKD seemed to be both bad and good. I gained a lot of strength – a lot. Got so much strength that I had to go to pseudo-one arm pushups, as I was doing 30+ regular pushups. (A “pseudo-one arm pushup” is where you keep one arm on the ground, say extended at 90 degrees away from the body; so, it’s not a “true” one-arm pushup, where you put one arm behind your body while doing a pushup with the other arm.)

The bad news is that when I went to get into my shorts from last summer, a lot of them no longer fit. I think that’s due to the muscles around my waist expanding, while not losing much if any belly fat.

So, I went back to lower fat (usually) and fasting.

I don’t know if it was the saturated fat or the TKD that caused this issue. Right now, I am just eating a variety of fat content. Still avoid PUFAs (avocado, try to cut back on chicken, pork and bacon, etc.), but will eat sour cream, cheese, butter at times. Sometimes I do and sometimes I don’t.

I have yet to determine what’s best, though, for me, eating high amounts of saturated fat does lead to a LOT less hunger. Does it help with or is it detrimental to body sculpting? It’s unclear.

Did you check calories over that period? I’ve noticed a big spike in weight upon raising saturated fat post-diet, but I probably just went overboard.

I’d definitely agree with you on PUFAs, seems like that’s the most reasonable takeaway from the crossaint diet. Balance the Omega ratio, cut down inflammation, and that has to be a big net positive for belly fat loss.

I’ve been low carb/keto since 1/1/14, and have never checked calories, ever, except when testing with a CGM whether protein caused a blood sugar rise, and then only because I happened to be looking at protein. 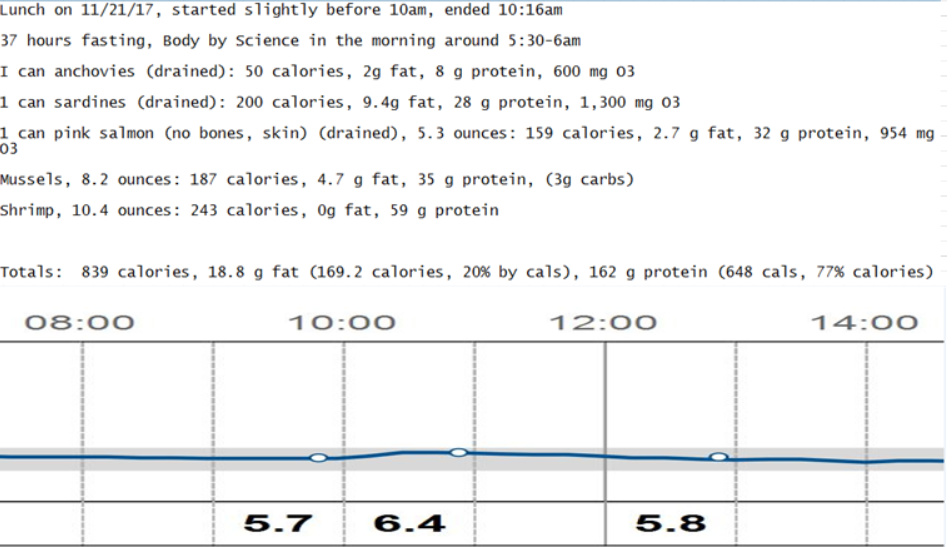 I was super low fat (Pritikin), way back when, and used to input my data on an actual program (this is many years ago) on a computer. I ended up hating tracking.

Also, there are so many errors inherent in tracking calories, that I’ve given up on it. For instance, you eat a ribeye with fat. The only way to really know what you’re getting is to cut the fat out and measure it separately from the meat. Eating chicken thighs? What about the bone? What about the fat and the meat? Realistically, you have to separate the fat and the meat, weigh them together, and weigh before and after with bones.

That’s too much work for me. And since my wife makes a lot of meals, I’d have to ask her to weigh and measure everything. That’s going to go well, especially with two kids at home all day now.

I did have multiple times while on the high saturated fat diet, where I only ate “lunch”, because I was so not hungry. That never happened before. I’ve always had a difficult time doing OMAD.

The issue was, though, that since the family eats at night together, I wanted to eat with them. Pre-covid, I could go pick them up at 7-8pm, and just come home and not worry about eating. Post-covid, they were home all the time, so I ate with them. Even if I was not that hungry, once I started eating, I ate a somewhat normal meal.

The other thing is that I physically look better. Way back when, I was a pseudo-bodybuilder and I still have remnants of that musculature. I’ve gotten back some of that now.

The other issue is that if I tense my stomach muscles, I can punch myself in the gut and feel solid muscle. That muscle is under a layer of fat, but it’s solid. I also do abs and surrounding areas three times a week, but main muscle groups like chest mainly one day a week. So, my abs and lower trunk are thick.

Without a DEXA scan, I can’t really tell.

One thing the other thread observed was that he said the ONLY reason he added the croissant thing is because he was trying to prove that the positive results of focusing on saturated (not mono-unsat or pufa) fat in his trial were NOT due to it also being ‘low-carb’. So he added something carby and he’s a french chef so croissant was a pretty basic choice for him.

Anybody with a lot of fat to lose should not be eating croissants, whether or not the accompanying saturated fat is useful for being less hungry less often.

I suppose if one is going to eat carbs anyway, then one might as well try the satfat experiment to reduce some hunger, but that would have to come with scrupulously avoiding PUFA, since pufa sucks anyway but pufa+carbs sucks even worse for health.

I think this does make another case why ruminants are better than pork and chicken. I’m going to start phasing out the pork chops. And I remember Lyle Mcdonald writing about how you can’t specifically target insulin resistance in fat cells without also creating insulin resistance in muscle cells. Mind you, that was probably a decade ago, but it’s nice to see evolving research.

Paul Saladino Explaining the Concepts of Hyperlipid/ROS Theory of Obesity in a compact 22 minutes.