6-8 weeks are normal for fat adaptation. Things may change afterwards but it’s very individual. But until then one just should do keto, tweaking can come later if needed (it can be done earlier but makes sense only if the actual style very much not working, uncomfortable, you track and realize you barely eat etc.).

@IvyKCKO (and anyone else who likes yogourt):
Mike's Keto 20% Vanilla Yogourt

im not lucky to deal with the muscle loss, but im willing to go thru with it

Sorry, I don’t follow what you’re trying to say here. If you’re really losing muscle mass - how are you determining that? - as Paul says you need to eat more protein. Doesn’t matter how much or what ratio you think/claim you’re eating now, if you’re losing muscle you need more. Plus, maybe you also need to pump some iron to convince your body you need more. But most importantly, how are you making this determination? What’s your evidence? A couple of weeks is diddly. To a large extent body comp and conformation are genetically predisposed and changing them takes time, dedication and effort.

This post was flagged by the community and is temporarily hidden.

If you’re really losing muscle mass - how are you determining that?

The fat content if yogurt is clearly marked. If it’s less than 9%, I don’t buy it.

Don’t yell at me, but I’ve been eating zero percent fat, Greek yogurt. Sorry, ya’all. I do add collagen peptides and coconut flakes to it, though. Sometimes, chocolate chips too.

(not yelling). Do you prefer the texture of the 0% fat? Or the taste? Just curious.

Testing higher protein, lower fat. Also, testing collagen peptides, and need a “vehicle” to deliver them. That vehicle, for me, is pretty much yogurt. I can’t figure out what else to use.

I do think I’m more suited to higher protein, lower fat, for reasons not entirely clear to me. Genetics? Exercise routine? Muscle mass? Being male? Something else? A combination of some/all of these?

May compare some higher fat stuff too. Eat a small amount of yogurt each night, so may try zero fat/high fat each day or maybe 2 days each to see if there’s any difference.

I’ve also tried goat’s milk yogurt, but it’s not “Greek”, meaning I’d have to filter it. It was good, though. But expensive. I need my own goats! But then I don’t have time to care for them.

And you’d get a lot of exercise chasing the goats to milk them and that would be another parameter to take into account when considering results.

Oh, goats… They are lovely. And ate my fruits and fruit trees (one and partially though quite seriously and it survived but still) and they weren’t even mine so I couldn’t eat them without problems… I felt tempted though and those were my almost vegetarian keto/low-carb times

Almost (I don’t care if someone think it’s not a thing, it totally is to me. I wasn’t a vegetarian, sure but almost all my days were.) Home-raised goats once in a while could fit… sigh

I never tried 0% yogurt, I am not even sure I ever saw it (but considering I kind of don’t believe in low-fat dairy, it’s possible my subconscious mind just filter such things out). I am willing to try. I would be willing to try vegan not-cheese too (me and my curiosity…) but knowing it’s surely bad (many vegans avoid them and if they try, they hate them), nothing like cheese and expensive, I can’t bring myself to ever buy some. Oh well, maybe there will be some tasting in a hypermarket one day.

I looked at the yogurts in the shops and indeed, there are 8% ones

Still low protein so I don’t get why they are used for that but I live in a different world, probably.
8% is too low-fat dairy to me but from a yogurt it’s something.

If I wanted to do a low-fat day (stupid idea, I would almost surely fail. very high protein is easy but only with high-fat), I would still do it with proper stuff like pork and eggs and full-fat dairy (half-fat is that’s the highest fat version. quark only has low-fat and half-fat versions. nevermind, I mix sour cream, mascarpone or yolk into it anyway. half-fat is way too lean).
As our protein need is very small compared to our energy need, it doesn’t make sense to me to focus on protein too much. Unless someone is fine with a very low-cal day. I can’t do them. My body would throw a huge temper tantrum if I wouldn’t be in a state where I automatically eat until my hunger is gone during my meals… (Or something close to that. I stopped eating while hungry before. I had to. But it’s very rare.)

Why do you folks filter yogurt? I never heard about that until I’ve read it here.

Where I live, low-fat or non-fat yogurts were all you could get for a while. Now, you can get some 10% fat stuff, and even goat’s milk. Not many of those, though, as in one of each at the store I go to.

Filtering just makes the yogurt thicker. You lose a lot of the whey, and whatever else is in the liquid that comes out.

At some point, I’ll compare 10% versus non-fat to see what I think is “better”.

There are things called “drinking yogurt” here, I think those are flavored though… Whatever. Those are really drinkable, so thin! Normal yogurt is usually spoonable

Still watery but I thought yogurt lovers must like watery. If I don’t want watery, I just eat sour cream. But I live in a country where it’s everywhere (and it’s cheap) as dishes very often require it. Yogurt is barely cheaper and it’s just a watery nothing to me.
But I am so biased and a bit envious there are countries with cream with more than 30% fat and super fatty cheeses and whatnots. Though I am fine with our stuff… It just sounds so nice to have something extra fatty

Our sour cream is usually only 20% too, sometimes 25, no idea what is it like elsewhere.
(I can’t afford even the fat in ours if I don’t want to eat too much but that’s not the point and it’s all about amounts anyway!)

@Shinita , as Bob said, it’s mostly to make it thicker. Also, the whey (liquid) has a sour taste, so when you drain it off, the yogurt has a better taste.

I need my own goats! But then I don’t have time to care for them.

My dream is to raise Nubian dairy goats after I retire, and even them will keep my herd small. Like you, no time to care for them while I am still working. The chickens are easy to care for and my husband can do that with me just helping out, but milking goats every day is a whole nuther commitment.

You can make your own sour cream out of cream and buttermilk.

Sour cream:
Fill a pint canning jar with hot water to warm and sterilize the jar and pour out the water.

Fill with heavy cream and add 3 Tbl cultured buttermilk (make sure not skim buttermilk). Leave on your counter for 24 hours. Stir and refrigerate.

Heat 1 quart whole milk to 72 F (22 C). Transfer to glass cannign jar, stir in 2 Tbl cultured buttermilk and leave on your counter for 12 hours or more to thicken. Stir and refrigerate.

Save 2 Tbl for your next batch.

Though you need to have cream that’s not got anything in it. I can buy two of these, one is “normal” and one is from a local farm and double the price of the other, which itself is a few dollars over the cost of the ones with additives.

True. I make it out of the same heavy cream I use in my coffee that I get from Walmart. It isn’t pure cream - has 0.5% other additives but I can live with that (1 tsp per quart).

So easy to make your own and all you need are glass jars - no special equipment.

Thanks, @Janie and @ctviggen . Unfortunately, the “buttermilk” here is pretty fake – if you can find it at all. And the cream has additives too.

That’s a shame - we can get cultured buttermilk here from the grocery store that has live cultures - otherwise it wouldn’t work.

You can also buy powdered buttermilk cultures from a cheesemaking supply company. Once you make your first batch you can save some buttermilk for your next. I don’t use that much buttermilk so I only make a pint at a time because w/o preservatives it will go bad faster than commerical buttermilk.

If I need to make some more and haven’t used it all, I will feed it to my chickens so it doesn’t go to waste. I know you don’t have chickens LOL - just relating what I do because I hate to waste food.

Also, the whey (liquid) has a sour taste, so when you drain it off, the yogurt has a better taste.

Oh okay so it’s for people who don’t prefer sour things. I do. That’s why in the super rare cases when I buy something related to yogurt, I always buy kefir because that is more sour. I buy the sourest (and tastiest) sour cream too

There are kinda thick yogurts too so I thought who dislike the thin one, buys that. But I have really not much to do with yogurt…
But we have nice sour cream everywhere for cheap and I like fat so of course I go for that

What abominations you have there instead of proper sour cream?! It’s cream and bacteria here…
Starch? It sounds something that shouldn’t go in that, isn’t that, like, super bad? Taste and texture wise, I mean.

In the US I buy full fat Daisy sour cream and there are only 2 ingredients - cream and cultures. 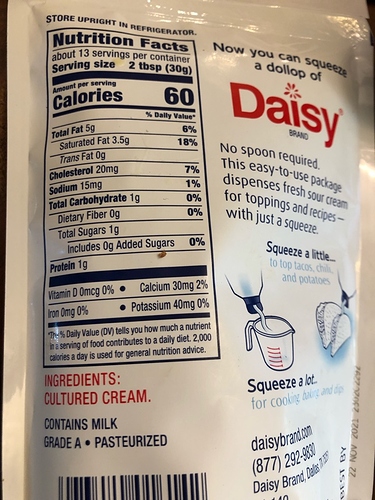