Ok, I am right now experimenting on my reaction to this sweetener (pictures below if you are interested). Natvia is a mix of stevia and erythritol (it seems mostly erythritol). I have been eating quite a bit of this, and I want to find out what my BG reaction is going to be to ingesting 50g of this stuff.

10 mins ago, I tested my BG level, and it was 5.0. I then weighed 50g of this Natvia, mixed it with water, and drank. Yuk, way too sweet, took some effort to get it down!

I will be testing my BG every 30 mins for 2 hrs. I will post the results every 30mins and interpreting results each time. See you in 30mins.
Cheers
Alec 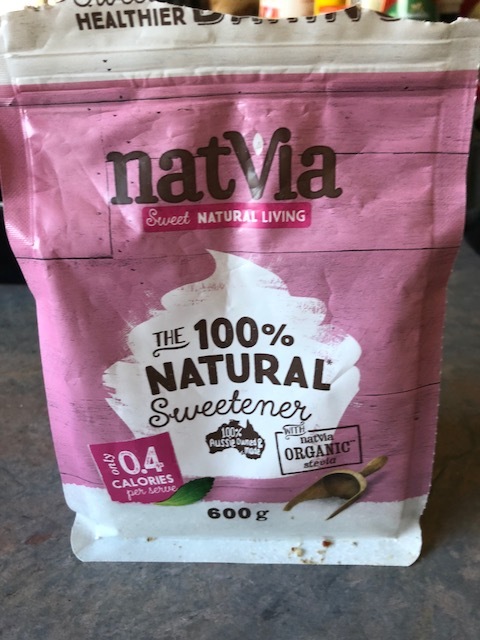 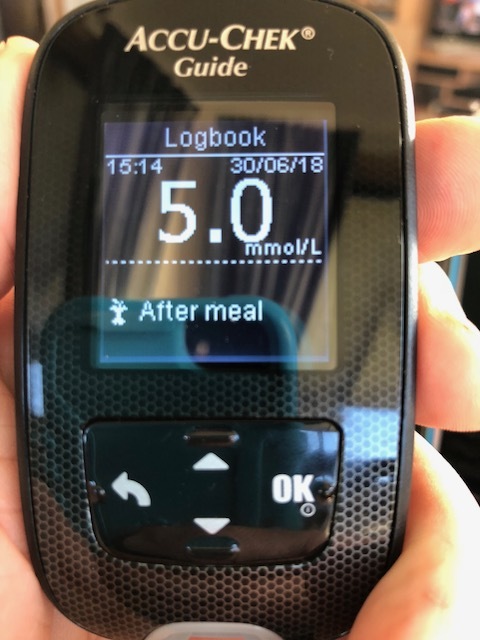 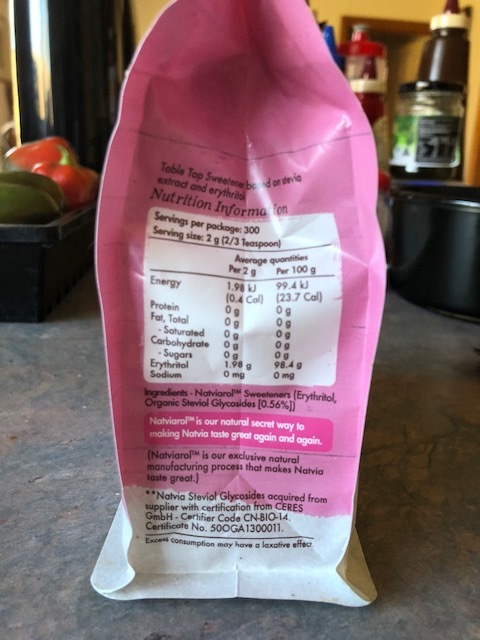 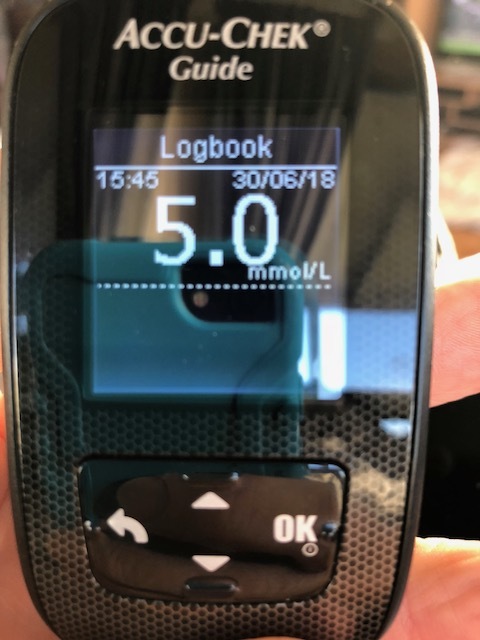 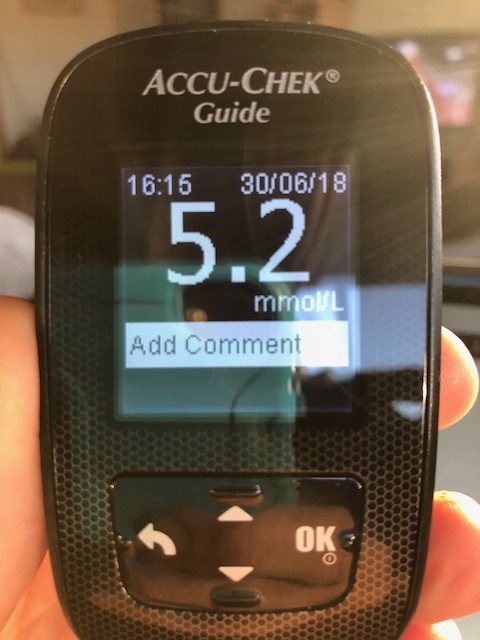 Interpretation: if I had an insulin effect of this sweetener, I would be expecting by BG to go down, not up. So I am interpreting this result as noise ie no change (same as last result). If anyone would interpret this differently, please reply, I would be interested in your opinions if you are experienced with BG tests.

Being that you are technically an endurance runner/athlete you could probably eat regular table sugar and burn it 23x* (GLUT4 transports are functioning optimally) faster compared to what the average person would burn; resting and active state?

The Effects of a Ketogenic Diet on Exercise Metabolism and Physical Performance in Off-Road Cyclists - Adam Zajac, Stanisław Poprzecki, and Grzegorz Zydek

Oh-oh! Just read the notice on the bottom of the blurb… “excess consumption may have a laxative effect” 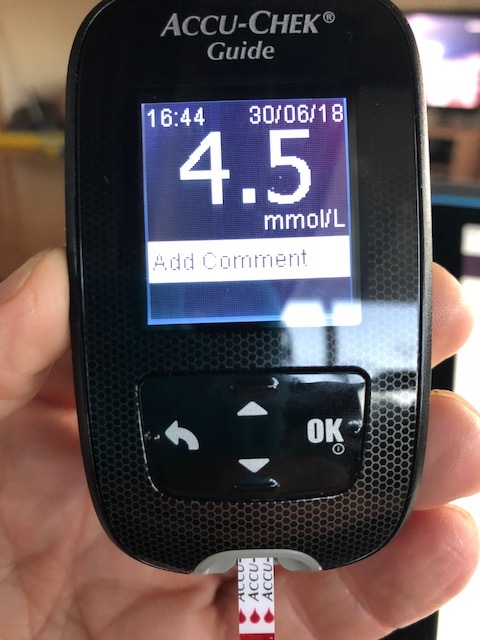 Interpretation: at T+90, I am down to 4.5. I think this is a significant change (especially from the previous 5.2). So I am inferring that my BG has been driven down here by an insulin response, which I am also assuming was triggered by the sweetener. 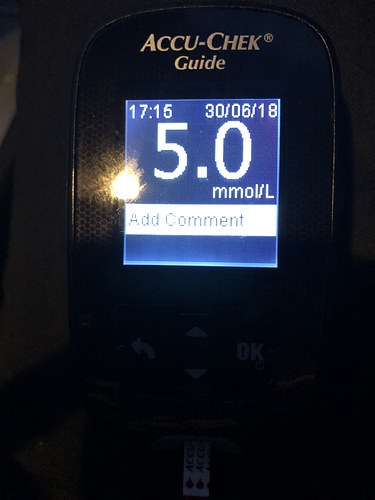 Final interpretation: now back to where I started at 5.0. So, I think that I had a mild-medium insulin response between 60-90mins after ingesting. The insulin drove my BG down from a T+60 of 5.2 to 4.5 at T+90. Some of this could have been noise, but I think that size of movement is significant. Interesting also that the BG depressing effect was very temporary, and was gone by T+120.

One additional point of note. I think this 50g of this sweetener has given me a mild headache, which is interesting in itself.

Conclusion: This sweetener is probably no good for me as it seems to give me an insulin response. I will do the same test tomorrow with another sweetener I use: xylitol.

I would be grateful for any comments, suggestions or observations.

I hope that these posts may also give some folks an idea of how to test the effects of sweeteners on BG and insulin.
Cheers
Alec

Hahaha, enjoy! Thanks for taking one for the team, fascinating results.

I think I used a similar sweetener when I made a keto cheesecake. I enjoyed it, didn’t test my glucose (no meter ) but I also get a mild headache from it.
I also find it a bit too sweet so think I can cut back ob the amount used to sweeten.
Thanks for the glucose test.

Also, could the glucose/insulin response be because of the sweet taste? Just a thought.

A question I had…

You mentioned getting a headache from the sweetener. I had noticed I get a mild headache when I way overconsume erythritol.

Would you get the same or even a significant reaction if you had 5g rather than 50g? If you did want to consume some of it as a sweetener in a dessert or sweetener in your coffee, would you really be consuming 50g of it?

It makes me wonder if a more normal serving of it would give you anywhere near the response, or any significant response at all. I can think of a number of things that would make me sick if I ate or drank way too much of them.

Also, could the glucose/insulin response be because of the sweet taste? Just a thought.

It is possible, but I would have thought the reaction would be lower if it was just a sensory trigger. But you’re right: definitely possible. But that still makes this no good for me, I need a sweetener with little/no insulin response. Xylitol is the next go to. But if it is sweet triggered, that should result in the same

Would you get the same or even a significant reaction if you had 5g rather than 50g? If you did want to consume some of it as a sweetener in a dessert or sweetener in your coffee, would you really be consuming 50g of it?

Brian
You make an excellent point. I used a significant quantity for the test to amplify the effect if there is any.

I would normally be using about 5-10g of the stuff a day (roughly), so I may repeat the test with that lower quantity.

Thank you for the great challenge.
Cheers
Alec

FYI: the brands Truvia and Pyure make stevia/erythritol blends. Interestingly, the serving size on the Truvia packet is 3/4 tsp, and on the Pyure package it’s 1/2 tsp. (???!!??) They both seem to be erythritol flavored with stevia, which makes sense, since stevia is so sweet.

I use a combination of Xylitol & Erythritol (Lite & Sweet) so will be following your next experiment.

Yes I have the pyure one. I also have their organic liquid extract that I also get a headache from.