Enjoying carnivore but getting frustrated with lack of results

Wow! What a great post! I’m glad your wife appreciates the engineer in you and was onboard with the daily data taking. 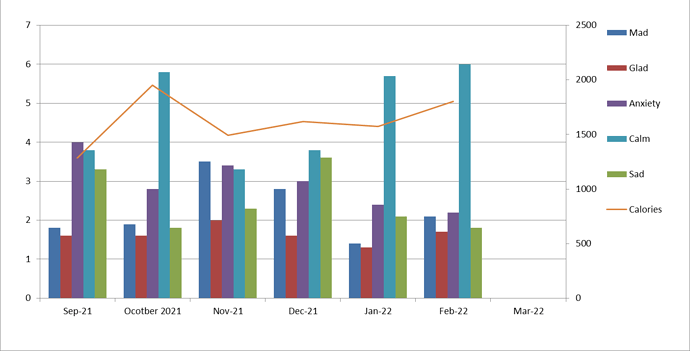 Wow!! That is awesome; and thank you so much for sharing such personal information.
I shall definitely cut out the dairy as of tomorrow and monitor the results. Fortunately, I have recently lost my taste for coffee and can get by on black tea.
I shall also attempt to get to a point of strict carnivore as soon as possible. But like you, currently I do need some chopped onion and bell peppers cut into strips of fried steak once or twice a week for variety.

Congratulations on the success you have had in making your wife’s life so much more enjoyable. She is indeed very lucky to have you in her life.

Well She is pretty special to me so we both do well to have each other. Yesterday we celebrated her birthday. She asked for a keto cake. After four months of carnivore it felt like “cheating” emotionally and she texted me today asking if I too was subject to frequent potty runs. I have not.

For a few years I was involved with fasting frequently. 5-10 days. Water coffee. I ran large Fung groups and was in communication with Megan et al. Knowing what I know today about carnivore I wouldn’t advocate fasting. During that time I reversed osteoporosis from -T1.9 to + T1.7. But more importantly I have reversed my heart disease and it continues to improve on carnivore. That story can be read here: https://ketopd.com/2021/08/13/how-keto-and-fasting-reversed-my-heart-disease-part-one/ I keep meaning to update this with like 6 more blog posts…anyway.

Eat when hungry. Eat past satiety erroring on the side of overeating. Ignore the clock. Eat again when hungry. That is a pretty true ZC path. Now then, do I follow it? No. Because work schedules and the desire for us to eat as a couple outweigh the benefits ( for now).

Thanks again for all your sage advice, and for taking the time to correspond in such detail. It is truly appreciated.

@marklifestyle Holy Moly, I am flabbergasted! First, congrats on even thinking of keeping a chart on things most of us would consider too intangible to measure. That chart is hands down one of the best things I’ve seen on here.
You may have actually broken through the HWC barrier for me…. My only non-ZC is decaf coffee with stevia and HWC. I have looked at it as a non-negotiable since starting keto-then-carni 20 months ago, It is a mental thing. The only sweet treat I hold onto like a worn out security blanket.

But… I definitively (at 67) see some signs of losing some mental acuity. You know, the things we accept like “That’s just part of getting older.”. Well… looking at your chart, I begin to think, “Not so fast!” Literally, not so FAST. If I can even just slow that progress, it will be a win.

Oye! A ridiculously scary proposition. But I drank my coffee black for years. I can do this. Thanks again for the info and inspiration!

I’ve been drinking my coffee black for a couple of decades, now. Under the influence of posts on these forums about Bulletproof coffee, I tried putting cream in it for a few months, but eventually decided that I really prefer it black.

Tastes really change on keto. When I started, five years ago, the taste of unsweetened chocolate was far too bitter, and I’d mix my own chocolate from Baker’s unsweetened, stevia, and heavy cream. Now, when I have any, I prefer it plain and unsweetened. Go figure!

Well it is black tea for me tomorrow.

Funny, but it is now just eating that I am struggling with. I thought it would be things like craving sugar and missing other things. But actually I am struggling to want to eat more than once every 24 hours which isn’t quite what I used to be like.
And when I hear that the most successful carnivores eat 3 times a day, it concerns me a bit!

@marklifestyle As noted by others, your wife is a strong and lucky lady.

You may have actually broken through the HWC barrier for me

Early on in keto my wife stalled. We went to a book signing with Maria Emmerich and she told my wife to drop the stevia ( contrary to her current position) The stall was broken. I have noticed a few things with both stevia and HWC.

All sweeteners might be harming gut biome. We have no knowledge on this but almost to a tee every person in my FB Heart groups who gives up the alternative sweets on a regular basis sees some form of improvement.in weight or blood panels or both. Something other than insulin is being affected. My friend Patty Gilfeather does not use alternative sweeteners and instead has her sensitivity back and the willingness to limit to one desert every couple of weeks. She’s been low carb for thrity years however. Big Difference.

My HbA1c has been acting oddly of late. As is my blood glucose. Higher by 15 mg/dl. When I go black in a day it drops back into the 80s. I use normally Organic Valley HWC. So this is something I need to figure out. My wife did begin using butter instead of HWC at that smae point so it was not just dairy. Nor was it A1 dairy compared to A2 dairy. I tested for that.

Excessive coffee drinking with cream is my last ■■■■■■■ vice and its a hard one for me.

To give y’all a sample of what my poor wife puts up with…here is one half of her spread sheet. Glucose, ketones, Oura recordings, blood pressure, AliveCor6 EKG in on the other page. Blood draws every three months along with a Dexa. I’m lucky I haven’t been killed in my sleep.

If I wasn’t the cook in the house I very well might be.

You are being impatient. Stay with the OMAD ( eat fatty beef until to cannot look at another bite ) you will get better.

I loved reading your posts, @marklifestyle - thank you so much for sharing.

All sweeteners might be harming gut biome. We have no knowledge on this but almost to a tee every person in my FB Heart groups who gives up the alternative sweets on a regular basis sees some form of improvement.in weight or blood panels or both.

There are a number of reasons this might be so, quite apart from any insulin response from one of the sweeteners. I don’t hear much about the cephalic insulin response these days, but one possibility is that the taste of an artificial sweetener causes the body to gear up to receive a load of sugar. In any case, I suspect there is a lot of individual variation at work in these matters, and people just have to try suggestions until they find what works for themselves.

Paul
You remind me of my n=1 testing phase…

Ok, I am right now experimenting on my reaction to this sweetener (pictures below if you are interested). Natvia is a mix of stevia and erythritol (it seems mostly erythritol). I have been eating quite a bit of this, and I want to find out what my BG reaction is going to be to ingesting 50g of this stuff. 10 mins ago, I tested my BG level, and it was 5.0. I then weighed 50g of this Natvia, mixed it with water, and drank. Yuk, way too sweet, took some effort to get it down! I will be testing my…

4.6 uIU/ml up to 5.9 uIU/ml. That could be the pulse not a reaction. I was trying to prove certain Keto celebrity wrong.

Now Bikman in why we get sick argues gut biome for aspartame and suggests it might be similar across the board but no one knows what’s healthy biome looks like.

Its really inconvenient but I’m thinking of trying this with HWC.

Since you brought up cephalic response, I do know my HGH goes down on an extended fast. 8 months of testing not one increase YET I still gained LBM from resistance training. I was testing HGH as a proxy for autophagy.

but no one knows what’s healthy biome looks like.

Now, that’s probably the only statement about the gut biome that makes sense to me.

After my original post 9 days ago, I am afraid to say that I am actually feeling none of the benefits that I had hoped for.
In fact, I am feeling worse than when I originally posted.

Yes, I have lost a few kilos, but that was never the goal - just a bonus.

So what am I doing wrong?

I believe that my lack of appetite which has continued me on the path of OMAD is probably the likely problem. But I am just not hungry!!
As of tomorrow, I will force myself to eat 2 or 3 times a day, despite the carnivore recommendations by some to ‘only eat when hungry.’

I have also cut out my dairy, except for a spoon of heavy cream in my one cup of tea or coffee per day.

I have ensured to take my zinc, magnesium and electrolytes so I don’t believe the problem lies there. It is just that I can’t seem to will myself to eat more than I am.

As for my mood, which is very low now. I guess all the crap going on in the world has probably hindered any improvement!

Sometimes when your appetite tanks, you do have to sit down to eat anyway. And for me, I ask always surprised that once I start eating (with zero appetite), my body does a happy little jig and I devour the food.

After my original post 9 days ago, I am afraid to say that I am actually feeling none of the benefits that I had hoped for.
In fact, I am feeling worse than when I originally posted.

There is plenty of advice available on the Zero Carb Health and Zeroing in on Heath Facebook sites for newcomers to a ZC/carnivore diet, but it usually boils down to “eat more meat.” Another bit of advice is that it can take some people as long as nine months to really adapt to a ZC/carnivore way of eating, so it’s important not to give up too soon. Kelly Hogan has a lot of videos on her YouTube channel about the problems newbies face, so you might like to check them out, as well.

Especially since you are starting out, don’t restrict your calories or your mealtimes. Eat when hungry and eat to satisfy your hunger. Your body is making some major readjustments, and it needs fuel to achieve them.