Has anyone documented their measurements, along with results based on differing variables within the ketogenic lifestyle? I would be curious to see other’s data from such experimenting.

I have been measuring blood glucose and ketones after doing “Keto Carnivore” for one month. I can share the data if there is interest. With recording this data, I monitored results based off multiple variables, including:

Almost a month of recording, taking 2 measurements a day, I will share what I noticed:

But we’re chasing results, not ketones, right? With that said, I was not overweight when I began, but has excess weight I wanted to lose. By body fat recommendations, I would be in the lean category, but am aiming to get leaner. This has certainly helped with that consierably, and beyond that, my energy is fantastic. Workouts are great, and I’m thriving. As one who lvoes to analyze health related data, I thought I would share some observations of my numbers while on a ketogenic diet. If anyone has monitored tis similar the way I have, I would certainly be interested in hearing their results as well.

I’ve given up testing, other than for gross measurements. Both blood sugar and ketone meters have such bad error rates, they really aren’t useful for tests of the kind you are attempting to do.

Here’s a test of two Keto Mojo meters, different strips (each KM calibrated to its own strips) (and the green is where I switched the strips):

Here’s a test of Keto Mojo (left) versus Precision Xtra: 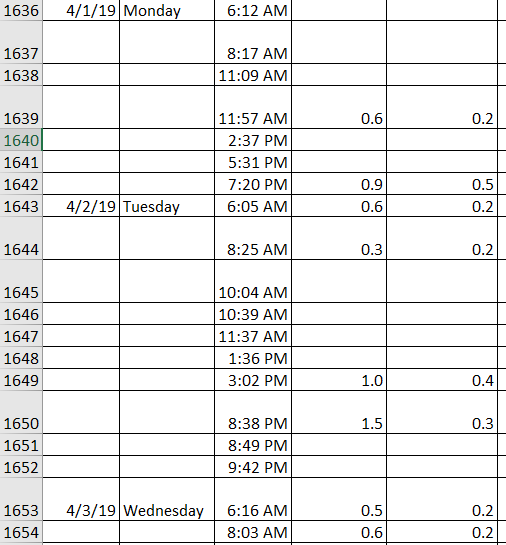 And I have a picture somewhere of three meters, two KMs and one Precision Xtra, with values of 0.2, 0.4, and 0.8, all from the same blood.

Factor in your blood sugar monitor is plus or minus 15% from the real reading, and that it’s incredibly difficult to figure out how your body reacts with ketones and blood sugar, and you might as well give up.

And of course, there’s what happens to everything over time: 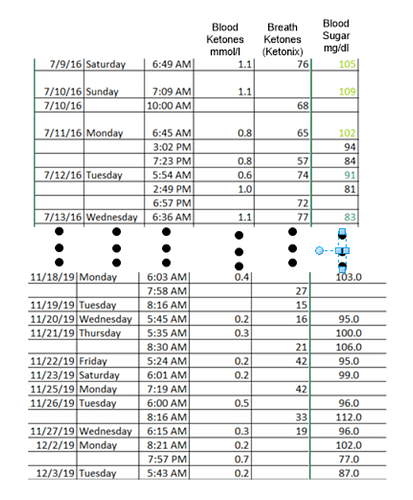 Sorry to be Bob the Party Pooper.

You may find these of interest.

Right? The longer your in ketosis (half year, 27 weeks or more), the more and more meaningless they become trying to track them; because the numbers on the ketone side are going to be lower than somebody just starting out to contrast with the blood glucose, that would mean anything to a GKI ratio? Using them for GKI blood glucose-to-ketone ratios would no longer be useful? At least that is my hypothesis for now?

Once your really oxidizing fat simultaneously with glucose; low levels of insulin still have to keep the levels balanced.

Glucose is always the better thing to watch, what I liked to do in the past is watch my glucose numbers very randomly with different meters and that tells me when I’m really hungry (not habitual or psychological) so I’m kind of fasting (engaging different phases and types of autophagy) to see how low I can go without eating which tells my metabolism when I should really eat (glucose is getting too low, feeling dizzy hypoglycemic?) and watch my body fat melt off which is super fun to do if you like experimenting and your goal is to burn some body fat. Not something you would want to try if your diabetic; that’s just my personal caveat or warning.

The more I did this the lower I could go in numbers all the way down to 20 or 15 (very dangerous)!