I was quite good indeed.

… When I do OMAD, with Liver, I always add the Onions since they go so well, and the Steak is a nice additive to the meal with no carbs. This was a small piece, but quite thick.

The onions go well indeed. I had an omelette earlier though and used up my carbs, so it’ll be just steak and liver and I will love it.

Breaking my fast with this. I could have gone much longer but hubby can’t and I would cave anyway at the smell of bacon cooking. 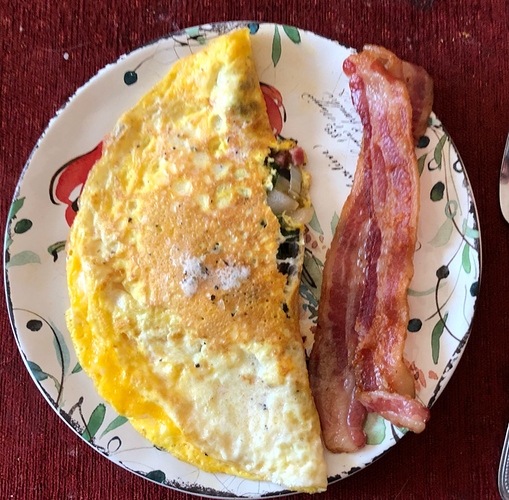 Lunch… Finger Food. - Turkey, Ham, Swiss Cheese, Hard Salami, Cheddar Cheese, Pepperoni, Roast Beef, Pickles, Olives, Almond Milk and Cream Soda Zevia. Also have an ounce of Habanero Almonds, just not sure if I will eat all or half? If half, will eat the other half with Dinner. (I limit them to 1 oz. daily.) 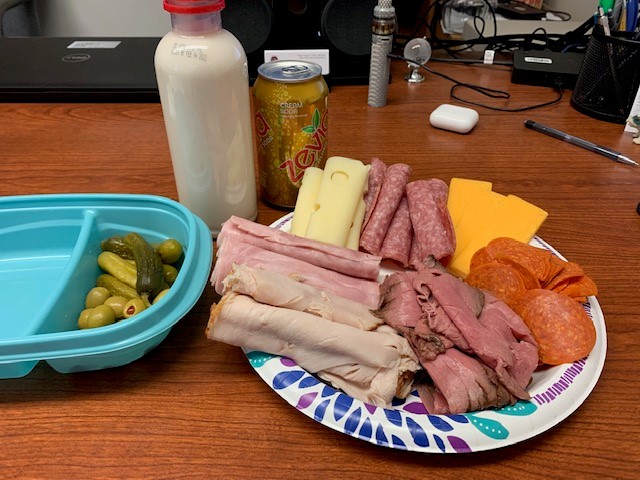 What a beautiful plate! How can you make nices photos of liver?! I am no good at food photos in general, yeah but liver always ends up super ugly, probably even beef liver and I don’t even fry it into oblivion onlike chicken and pork liver, not at all.
Maybe the light… My kitchen photos are the worst due to the bad light.

(With no onions are they are too sweet for me at this point. I still like them for the more bitter livers, I never ate liver without onion in the past but I find beef liver a bit too sweet anyway so onions are out - or should be eaten in moderation. But I like them just as nicely fried as you :D)

I had an omelette earlier though and used up my carbs, so it’ll be just steak and liver and I will love it.

I don’t have a carb limit on carnivore but liver is my second biggest help to reach 20g (it’s not intended, I am fine with 3-4g too)

It’s not nearly as effective as dairy as I never eat much liver. Probably few people does though I only heard about people on this site and for some reason, eating liver isn’t a big thing on the countries most people are from. Still, liver is strong flavored and easily triggers smaller portions. I don’t think I ever went over 300g and that happened only once.
I need better and more recipes, I always just fry liver and it got a bit boring and my family members like different kinds of livers and it won’t do to tolerate a food instead of enjoying the hell of it! So some additions must be made. Soaking in cream will be the next thing I try.

And my food today. Except I left a lot (mostly half of the pork) and ate some other stuff as usual (sometimes I think I should make the photo the next day if I have the food to do it. that way I could show what I ate). But this would be a very nice OMAD meal for me. Chicken, pork shoulders, eggs (the omelet contains some leftover pork skin and the boiled one is pickled), beef stew with sour cream. It was very tasty but I have this insanely quick satiation followed by hunger in an hour today. So I had 4 meals in 3 hours. 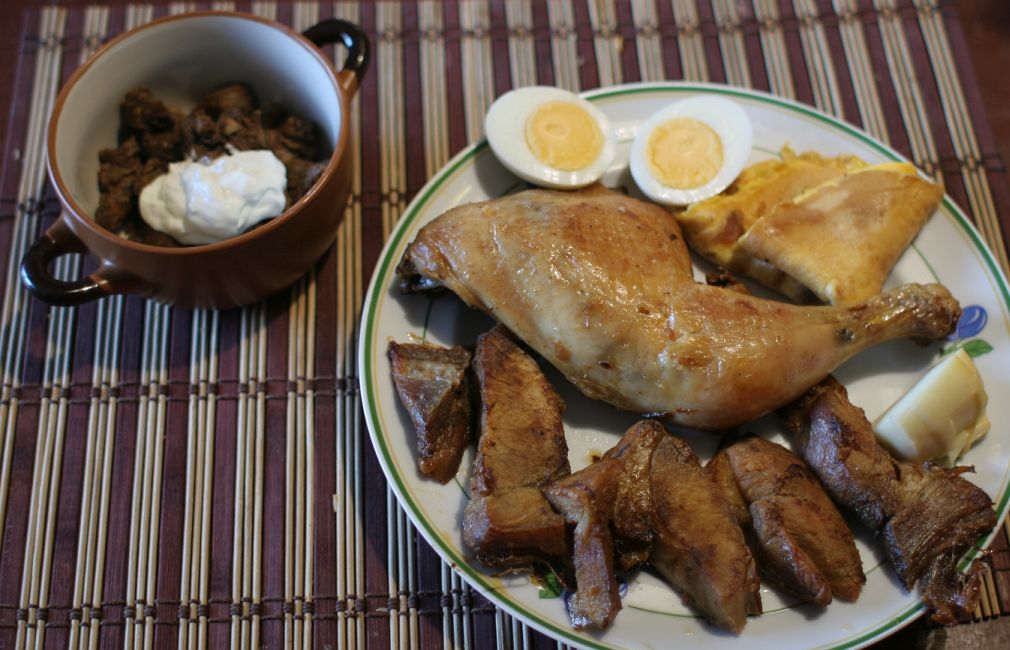 Thanks, but I actually took this photo while working down in my basement. Just decided to eat down there since I had been working most the day in there at the time, and it’s actually cooler down there. … TBH, I wasn’t sure how it might come out, since the lighting isn’t that good overall presently?

It probably was way prettier than mine irl as well. I like beef liver but mine isn’t this nice looking, the color isn’ so great. Most of my meat, egg dishes and fried onions, they are pretty but the liver never is and my photo just make it even worse.

Sometimes I add a sprig of basil or a lemon to my photos to get nice colours. I can’t help the urge for pretty colours

On days I eat tinned fish straight out of the can with a spoon, I don’t take photos 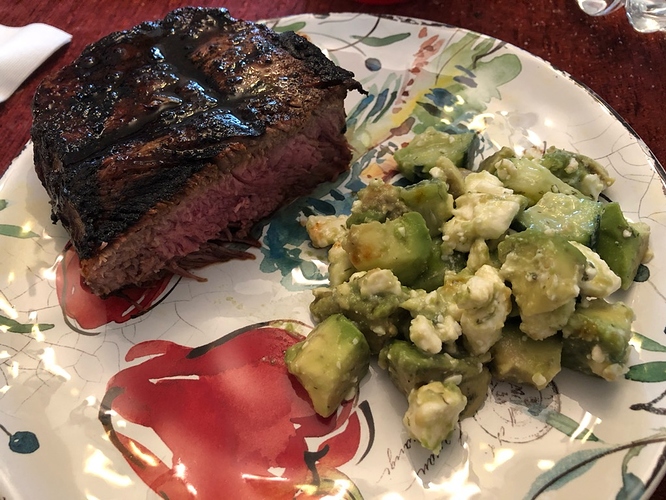 Dinner… 2 Cheese Burgers with Fried Onions, and ate the remaining 3/4 of a Rebel Butter Pecan. 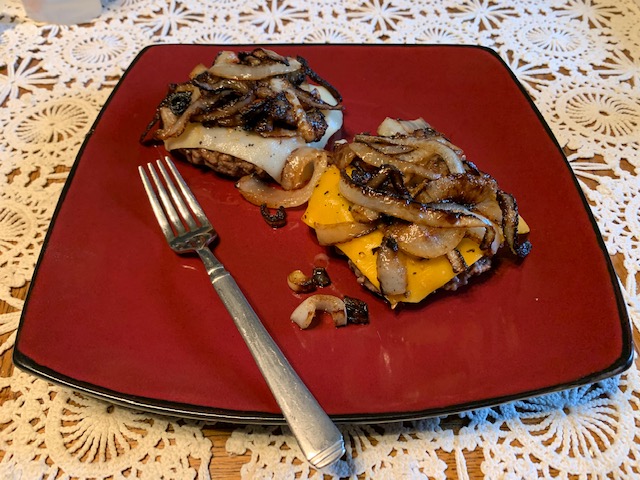 That’s my kind of meal! Looks delicious and reminds me I haven’t had fetta for a while. From tomorrow I’m going on a hiking trip so I’m eating all the meat and fresh stuff to build up my stores ready for the deprivation of jerky and sachets of tuna. I really hope I like jerky but I figure if I’m hungry why wouldn’t I eat something that is meat and fat. I will be having carbs for dinner because my sis prepped all the meals and I’m ok to fit in with her (with extra butter and salt added of course!).

Today’s noon meal is cold lamb with decorations. So tasty! 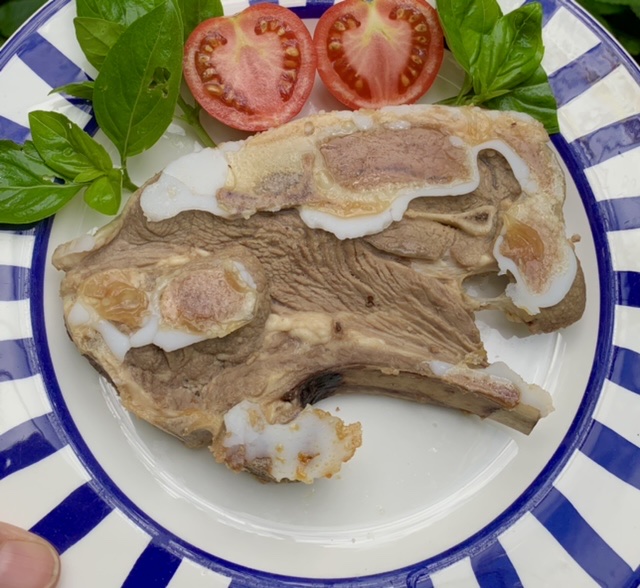 On days I eat tinned fish straight out of the can with a spoon, I don’t take photos

Hey, there’s nothing wrong with that!

Faux spaghetti with angel hair cabbage as the sub. Rao’s Arriabata sauce and the sausage I ground this morning.

Sausage was really good! Got the recipe from AllRecipes and the poster said it was her grandfather’s recipe. The only spice I didn’t have was anise seeds but I thought it was great just the way it was. 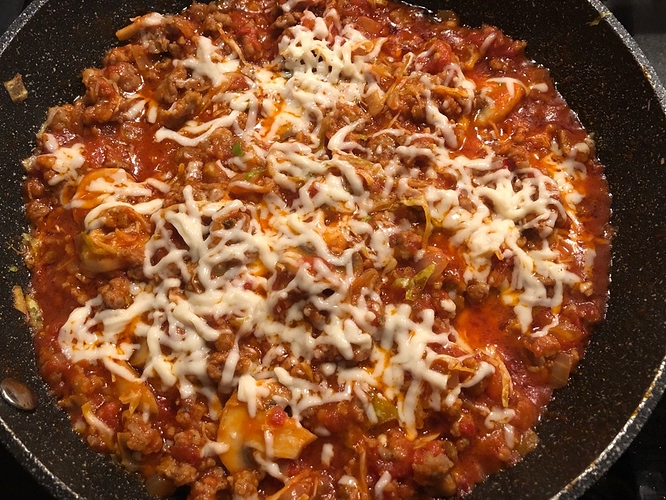 Lunch… Eggs, Bacon, Sausage links & a Slice of Ham Steak the Wife picked up today. This is about 1/3 of one, and she picked up about 12 - 14 of them, being they were on sale for just a couple dollars. 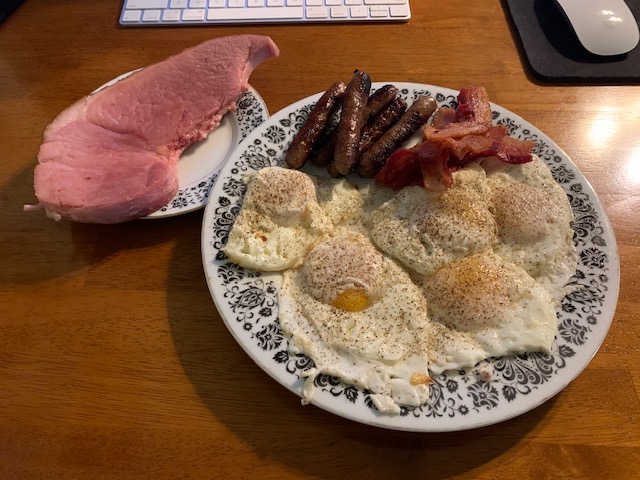 It may not look the prettiest but it’s absolutely delicious. Cabbage, bacon, and ground beef seasoned with salt, pepper, and smoked paprika. Sautéed until the cabbage was soft and then mixed with a bit of sour cream, put in a casserole dish, put shredded mozzarella on top and baked until the cheese was golden brown. 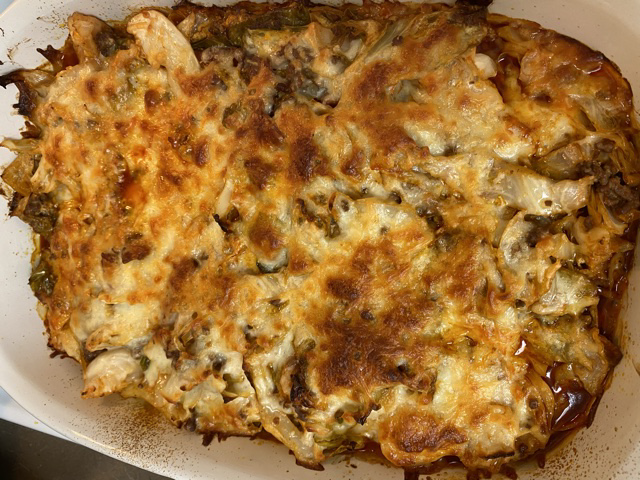 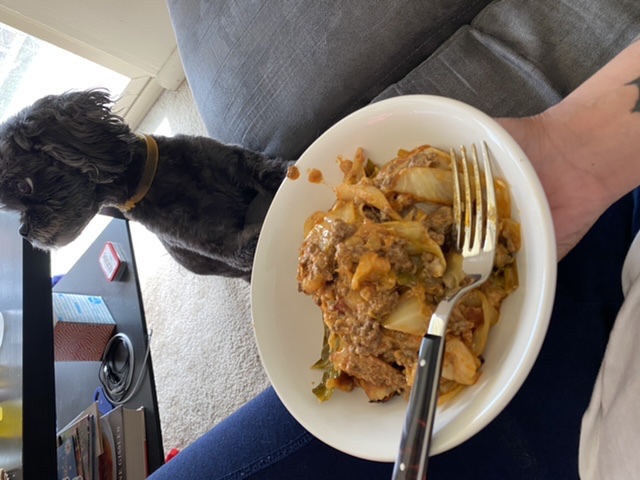 Nice dish, we often made something remotely similar with cauliflower… Just with some other cheese we prefer

So one can do this with cabbage too… Makes sense.

It’s pretty to me, by the way, gorgeous colors

*Dinner… I only ate one, and my Son ate the other… I did actually plan on eating both at first, but they came out quite packed in the end, and he wanted me to make him one after I ate anyway. Plus, the Wife picked me up a Peanut Butter Caramel Chip, Rebel. So decided to eat it after the Chaffle. 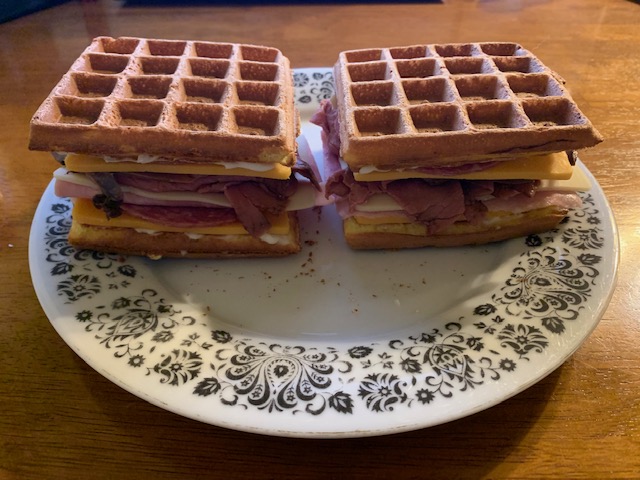 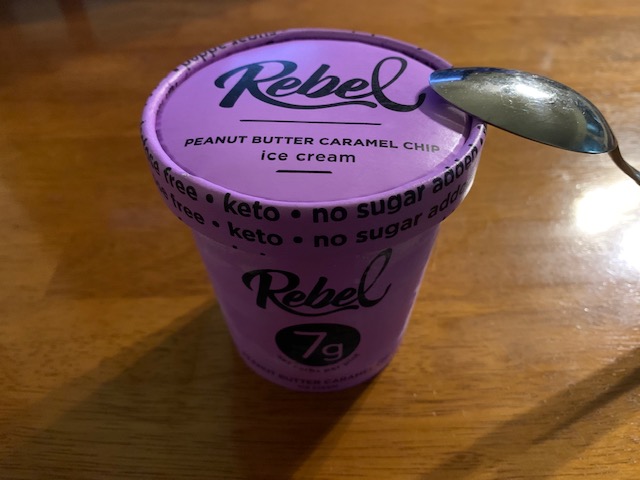 I also ate one ounce of Habanero BBQ Almonds, to complete the meal.

I make my own feta cheese from raw cow’s milk I buy from a local dairy. Delicious.

Love those combos. I will try that as I am a fan of cabbage casseroles. Plus I make my own sour cream from cream and buttermilk and it doesn’t keep as long as store-bought so always looking for ways to use it up before it goes bad.