Came across this today… 2g of carbs per bottle!

I have not tried it myself yet, but apparently good with a slice of lime and has a taste similar to Corona.

Delivery is free when you order 3 x 24. Might be something you want to club together for with a few other local Keto people so that you don’t have to order 72 bottles at a time!

Will see if I can find it out and about tomorrow - failing that, it will be a 4 pack of Brewdog Nanny State which is about 2-3g Carbs a bottle.

On the flip side… In my mind, I correlated low ABV with low Carb, found these guys online… http://www.nirvanabrewery.com/beer/ and asked them for the Carb content on the 2 I liked the look of.

This is what they came back with…

I queried, and they confirmed the figures were grams per 100ml. !!! give that a pass then.

There is also “Skinny” beer, i got it from tesco

Drink responsibly is the answer.
Drinking beer has its advantages and disadvantages.
Alcohol Makes Your Heart Go Faster: New Research May Link Binge Drinking To An Accelerated Heart Rate

Will give this post a little bump as I recently contacted a number of craft breweries to ask about carb content in their beers. Had a range of responses from fantastic to fobbing off, but will put down what I have got back here for all to read.

Brewdog
Said "If you google carbs in Brewdog Beers you will be able to see the results, Myfitnesspal is probably the most commonly used one, " - Not happy with that response, I hold some shares with them so will pushback.

Thornbridge
Said “we don’t test the beers in terms of carbs so we couldn’t say I’m afraid”. - I suggested that the LC movement is growing so maybe they should start doing so

Beavertown
Said “We are working on getting that information together to add to our website. We will update you when it’s ready!” - so will wait and see for them

Northern Monk
Asked me to email their production manager which I have done, still awaiting a response back

Mikkeller
Said "I’m afraid that I don’t have access to a list of all of these specs for our beers. But I’ve been researching a bit and in general, Lagers have the least amount of carbohydrates, then it goes up, pale ales being next in line, then IPA’s, Porters, Stouts etc. "

The carb content if our beer varies considerably depending on the style.
Our driest core beer, Calypso, typically contains about 1.5g/100ml of carbohydrates.
Yu Lu contains 1.9g/100ml.
Soundwave and undercurrent contain 2.1g/100ml.

Some of our one-off batches can be even higher; Bourbon Milkshake was 14g/l.
Generally speaking, the less sweet a beer is the lower the carb content.

I then followed up with a massive thank you and then engaged on a discussion around Keto as one of the responders brother has just gone Keto, so I pointed him to the dudes and this forum.

I will update as I hear back from the others or send more requests out.

Hi all, I heard conflicting views on the carbs in Marston’s Resolution so I tweeted the brewery directly, their response was “1.3g per 100ml”. This beer comes in 275ml bottles (slightly smaller than the normal size of 330ml), which gives you around 3.6g carbs per bottle. Still pretty good, and the taste is nice too (or at least as nice as you can hope for all things considered).

I’ve had the Skinny Brands lager too, it’s ok for a bit of refreshment whilst doing the BBQ and so that you don’t feel left out, but it’s not exactly got a deep flavour profile.

Good man! It’s still pretty good at 3.6g per bottle, especially when you’re out in the sunshine working on topping up the old Vitamin D.

I am having trouble finding the Marstons beer in the Preston area.

The closest I could find for you is Lytham St. Annes…

I’ve bought some from there, so they definitely carry it. It may also be an option to talk to the staff at your local Bargain Booze and see if they can get it in for you.

n.b. I have updated the topic title to reflect the revised carb value as found by @Keto_Tom

I tend to buy it online by the box at https://www.classicales.co.uk/Products/Marstons_Resolution/66

Haven’t seen it in a supermarket so far

Just posted a thread on carb calculators with a link to a Brewdog recipe book which helps you work out the carbs in each of their beers.

I brew all my own and therefore know exactly how many carbs per pint I’m downing. This woe has certainly cut my consumption way down. Abstaining for the month of August as an example.

I have a good friend who owns a brewery, small may it be, but he brews excellent beer, and has good sales. . Next time i see him I shall bring up the interest in low carb beer. Watch this space.

Nice one. I think a new wave of Brut IPAs have the potential to be low carb. Had one at Brewdog Tower Hill yesterday and according to the OG and FG they quoted, 12oz comes in at 1.7g. If that is true then this would become my new goto. Only problem is, it was a small batch brew they did on site, but later that day I had another from cloudwater so need to check that ones figures.

So that’s 3.3g per bottle, plus it’s gluten free! Winner. 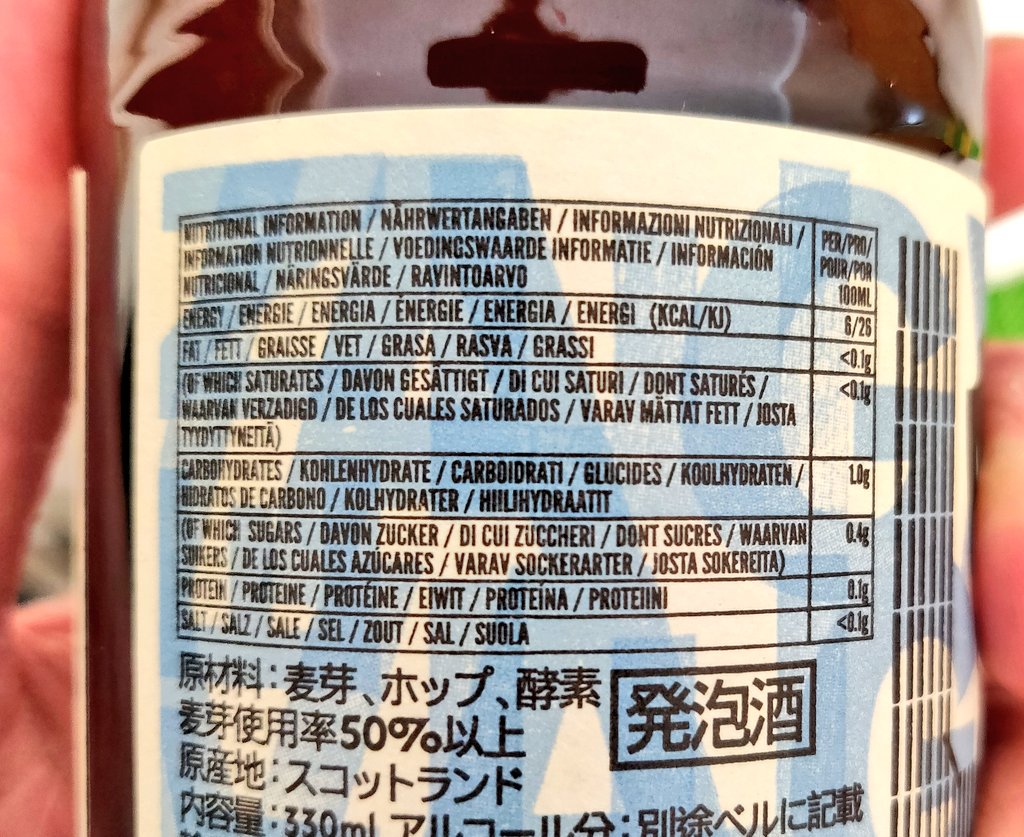 Is that the Pale Ale ?

I think it’s the Vagabond, the gluten-free beer. It is rather tasty.

That’s the one, vagabond! It’s an American pale ale