Trisodium phosphate is in most sugary cereals?!?!? It has danger warnings as a poisonous substance, but those warnings don’t exist on cereal boxes!

Actual poison in the “food.”

There are multiple meanings to this - all of them very disturbing.

This in an industrial world where carbon dioxide has just passed 410ppm threshold (according Scientific American’s recent report, the point of biospheric death with highly unlikely turnaround).

Insanity! Fortunately keto helps one use one’s brains and become a healthier human being for a higher good regardless. 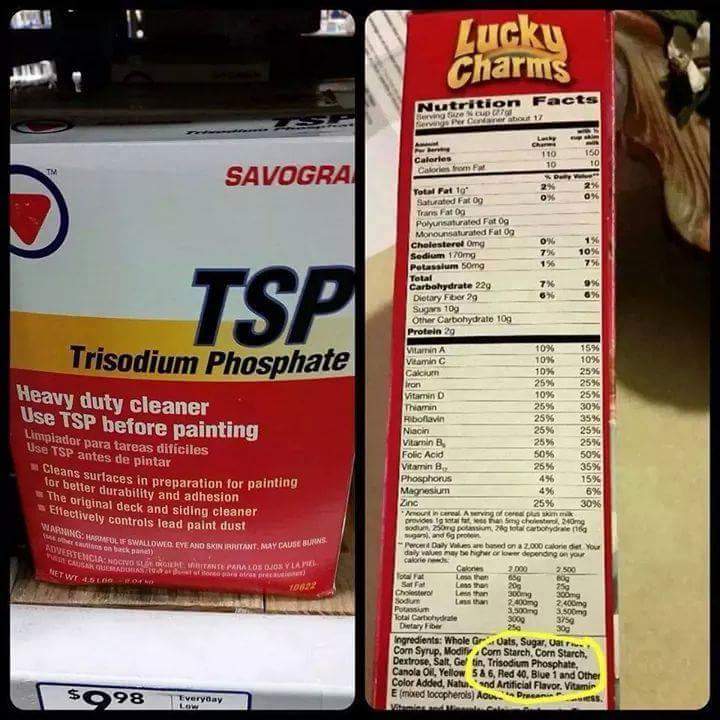 Trisodium phosphate is a common and safe additive used in small amounts in various foods, not a form of "paint thinner".

But what about the sugar in the Fruit Loops?

I use this stuff to make my teeth stronger! This stuff will repair and reverse cavities (tooth decay) and tighten loose teeth when mixed with K from saliva!

But I would not want to eat it!

Besides the benefits of low sugar diet i.e. keto, you can also REGENERATE tooth enamel and skip the dentist doing this: DO NOT DRINK: swish (1/2 cup or less) and rinse (push solution through teeth & gums) for 5 minutes a day: 2 Teaspoons of Trisodium Phosphate (TSP), Fine Crystals, 99.9% Pure Food Grade (your choice?) 6 Teaspoons of Baking Soda (sodium bicarbonate) To 16-24 oz. of filtered water, place in a bottle and shake thoroughly (everytime you use it) and store! Note: Also tightens up…

”…Vitamin K is found in high concentrations in the salivary gland where it breaks up dental plaque.…More

”…The ability of vitamin K-related compounds to inhibit acid production in isolated saliva had no relationship to their vitamin activity, and the most effective of these compounds…

”…Activator X (Vitamin K) also influences the composition of saliva. Price found that if he collected the saliva of individuals immune to dental caries and shook it with powdered bone or tooth meal, phosphorus would move from the saliva to the powder; by contrast, if he conducted the same procedure with the saliva of individuals susceptible to dental caries, the phosphorus would move in the opposite direction from the powder to the saliva. Administration of the Activator X concentrate to his patients consistently changed the chemical behavior of their saliva from phosphorus-accepting to phosphorus-donating…

”…Price used the combination of high-vitamin cod liver oil and high-Activator X butter oil as the cornerstone of his protocol for reversing dental caries. This protocol not only stopped the progression of tooth decay, but completely reversed it without the need for oral surgery by causing the dentin to grow and remineralize, sealing what were once active caries with a glassy finish. One 14-year-old girl completely healed 42 open cavities in 24 teeth by taking capsules of the high-vitamin cod liver oil and Activator X concentrate three times a day for seven months. …More

”…Saliva production is the exocrine function of the salivary glands. The buffering capacity of saliva is critical to neutralizing the oral environment. This minimizes the de-mineralization of enamel and enhances its re-mineralization. K2, such as that found in fermented cheese, improves salivary buffering through its influence on calcium and inorganic phosphates secreted. Data collected from several selected primitive cultures on the cusp of civilization demonstrated the difference in dental health due to diet. …More 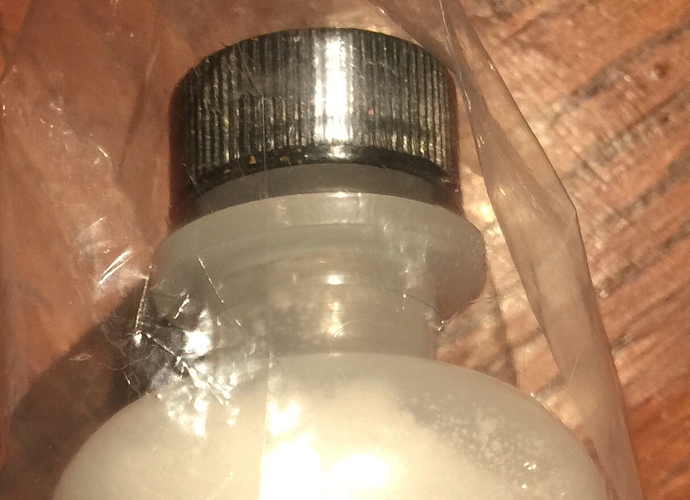 Food additives of many kind, including sugar - all poison - apparently.

Dihydrogen Monoxide is the “universal solvent” and it is not only IN many things we eat (naturally and as an additive), we use it to clean our hands/bodies and WE DRINK IT STRAIGHT !!!

Making a joke to make a point, things can have different uses and those uses may not go “together” (cleaner and food additive), but that doesn’t 100% mean its dangerous.

(And before someone points it out … I get that on general principal, the cereal is bad … and that EVEN Dihydrogen Monoxide in large enough quantities is bad)

I’ve been using K2 for a little over a year, teeth and other benefits as outlined in the WAPF linked article.

The dentist froze me then started grinding away the enamel, despite being frozen, it hurt, she had to push hard on the drill. After about 10 minutes of this she mentioned to her assistant that the burr must be worn out and dull, it wasn’t cutting very well. So she chucked the old one in the garbage, put a new one (out of the brand new box- not just a clean one) and kept on drilling. The new one didn’t cut any better than the old one. A minute into this she specifically asked if it had been a new burr, the response. “yes, right out of the box”.

So when we were waiting for the temporary crown to get prepped I had the chance to ask about whether she thought my enamel was hard, I can’t remember the exact words but they were along the lines of “Some of the hardest I’ve ever seen”. So hard that we had planned to replace other old fillings but the consensus was that the enamel was so hard and tough that the tooth would likely be just fine as it was, the chance of any problems are so small they are not worth worrying about.

So that was my opening to talk about K2 and what (little) is known about its effect on teeth and dental health. She was interested enough that when I offered to supply some information she was interested. We’ll see what happens down the road. I figure anything that gets good helpful information out there helps.

Don’t tell them about this they will freak out! lol

I did bring it up, to her credit she didn’t freak out. She did however make a comment (in jest I hope) about not passing info on as it could affect her livelihood… I chose not to comment but if it comes up again I will. Even if it doesn’t I probably will at some point. I am reminded of the Goldman Sachs report of a few weeks ago about whether curing patients was good for business.