There is no keto rulebook

So glad to see this. I have a hard time understanding alot of the advice and answers I get .(keto for 3 months) I have no idea what my macros are or what I am doing. I keep carbs at around 20 and have lost 37 lbs. I have no clue what half the abbreviations mean (though I usually figure it out) and people often respond with you can’t have that (apple slices, orange,berries) or asking where my macros are. No clue!! Lol glad to see not everyone will snub me for being lost.

To clarify, I do not eat those things all the time, just occasionally😶

Without context, it’s hard to answer whether a certain food is good or bad.

A single slice of apple? Probably not an issue. A whole apple at every meal, probably not good as it has quite a lot of sugar.

Peanut butter? A tablespoon here and there is probably not an issue. A pint every other day, probably not the best choice.

Carrots? They’re pretty high in carbs and not a choice I’d recommend for an everyday go-to veggie. But a few with the occasional meal, likely a non-issue.

Steak or chicken or fish? Probably just fine in normal portion sizes. Downing a few pounds at a sitting, probably not a good choice.

Keto muffins? Having one might be 3 to 5 grams of carbs so one with breakfast is likely a non-issue. Eating 6 or 8 of them with breakfast, probably not a good choice.

A small Irish potato in a pot roast at a friend’s house for a special occasion, likely a non-issue. Potatoes at every meal, not a good choice.

You get the point…

Peanut butter? A tablespoon here and there is probably not an issue. A pint every other day, probably not the best choice.

Unless, as we’ve covered in previous threads, you’re very skilled at getting a majority of the pint into a single spoon, then it’s fair game 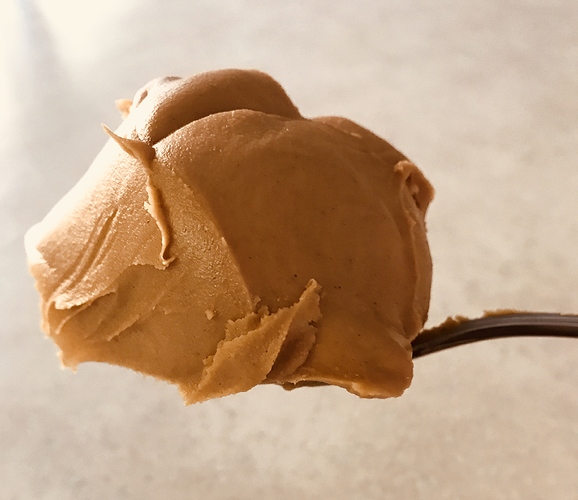 (I know, people type “LOL” all the time. But I literally am sitting here at my computer laughing!)

Oh, and forgot to add…

The reason it’s so funny… because it’s true! LOL! Seriously, is there a peanut butter lover out there who hasn’t tried this little trick at least once?

This post should be required reading for entry. Have been in tears this morning. I gained 2 lbs and the Facebook keto purists made sure to point out every possible keto misstep. Must remember, Keep calm, and keto on!

Have been in tears this morning. I gained 2 lbs and the Facebook keto purists made sure to point out every possible keto misstep. Must remember, Keep calm, and keto on!

You may enjoy watching Casey…

That was very enjoyable. Thanks. I especially like when she makes those little fists right up against the camera.

There are Facebook groups that terrible? But those that I joined feel alright to me.

I joined the Reddit group before, and I felt that the reddit is worse… That group is almost making me wonder if the keto lifestyle makes one braindead and thus unable to give constructive comment. Yes, I really had that thought.

Haha!
I briefly strayed into the FB Zero Carb altered universe… oh my goodness… what a load of w*****s!
Joined several groups only to leave within a day or two.

Hysterical, really. One group was Handbags At Dawn over whether ZC allowed intermittent fasting. I thought it was a duel to the death! Then it morphed into a Quote The Veterans OneUpmanship Battle. Turned out that neither of these two ‘expert’ plonkers had been doing ZC more than a few months, and were just spouting Doctrine rather than speaking about practical experience. Sigh.

The other ZC groups seemed to prioritise Vegan Bashing over discussing ZC and helping each other.

So that was that.
Mind you, it means I can ignore FB for another decade or so. Every cloud…

There are scary places (and people) out there o FB and a lot of forums.

I’m a part of numerous chat forums where there are lots of really nice and decent people who make the place warm and inviting. But even with that being the case, there are a few who stir things up to the highest level of nastiest they can get away with showing the world their backsides in living color.

This is one of the nicest forums going. We don’t always agree but thankfully it seems most here are generally agreeable. It makes it easier to relax and be myself here.

I left that group for this forum. Almost every post and comment on even simple questions gets derailed somewhere. And, there is a toxic dieter mindset that proliferates there. It’s like they took keto and decided an eating disorder would go well with it and that’s what they pass around for info out there. Not all bad but, it was rough. It made me second guess what I was doing and I ended up derailing myself trying to fit their recommendations. I’m still fixing the damage.