One of the tricks I learned from commercial restaurants was how they make the perfect sous-vide poached egg, so it looks like the white of a perfectly hard boiled egg but when you cut into it.

Now normally I used to boil the egg to cook the white for a few mins, and then put it in the sous vide at 63C to perfectly cook the yolk. But the problem is they are devilishly difficult to peel and at least for me only 1 in 5 look perfect and the rest look like they were gnawed from the shell.

Forget about the yolk for now, we know how to cook that perfectly 63C for 45 mins. But how do we cook the whites so we can peel the egg perfectly.

The trick I learned is to sacrifice the loose white. 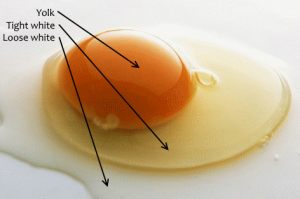 So What I do is cook the egg backwards. Cook the yolk first, 63C for 45 mins. Then break the shell letting the liquid lose white drain off and pouring the membrane enclosed tight white into boiling water to harden up.

Making for the perfect table theater as the egg is cut into and the yolk perfectly sauces the dish. 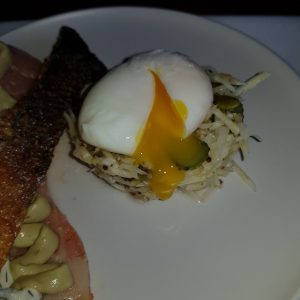 [wpurp-searchable-recipe]Sous-vide poached egg - - eggs, Sous-vide your eggs at 63C, this will cook the yolk to be runny but cooked, the white will not be hard but will be opaque. If you cook for 45 mins the cooking temperature will be able to penetrate the egg shell and the contents so the center of the egg will be at the cooking temperature.; Remove the eggs and run in cold water so you can handle them easily.; Gently crack a small window in the wall of the shell of an egg and gently pour it into a bowl. The loose white will run freely and we will be discarding that. We are trying to keep the outer membrane of the tight white intact.; Using a large spoon gently remove the intact tight white containing the yolk.; Add the tight white containing the cooked yolk to the pot for 1 minute to firm up the tight white of the egg. ; Retrieve with a large spoon and plate (this example some of the tight white was lost in the boiling but the egg still looked acceptable); - [/wpurp-searchable-recipe]

62 for a full hour gives a fairly firm white with liquid yolk without the extra boil step. 75 for 13 minutes for a firmer white.

Nice. I’ll try those too.

62 for a full hour gives a fairly firm white with liquid yolk without the extra boil step. 75 for 13 minutes for a firmer white.

Sorry it wasn’t clear. Those are two different cooking options, not combined.

Thank you! Came out perfect! Cooked it at 62C (143.5F) for one hour then I gently cracked it open and put it in some boiling water for about 60 seconds or so. Thank you to both of you @Richard and @Msims 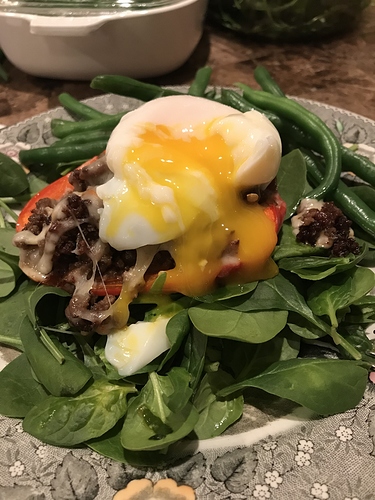 OMG that looks so good

You should get a commission from Anova because that picture just sold another sous vide. They’re on sale on Amazon right now. With free 1-day shipping, I’ll be cooking some eggs this weekend.

You’ll love it! Next up for me is some pork belly in the sous vide. And I love cooking salmon with it.

Looks wonderful! Just got my Joule from Chef Steps. My first project will be this and also trying to tackle Starbucks Sous Vide Egg Bites. Then on to steak!