A wise man once told me that time is tenderness and temperature is doneness. If you like that level of doneness, but want more tenderness, go longer.

Yup, you’ve mentioned that before, and I appreciate your mentioning it again. It’s worthy of the repeat. Now, I just need some more real life experience with various meats and various cuts of meats to get a feel for what I like best.

Been doing it for about ten years now. Some things I still don’t do often enough to have a strong preference.

I can hardly wait to cook a tri-tip that slowly.

If any of you are new to Sous Vide, I highly recommend Douglas Baldwin’s site for safety and temperature advice.

How did the texture of it come out for you? I like the “pink level” of what you posted, that’s about right for me.

It was a little too firm for me. I think it could have been more tender and not so well done. I guess I like mine more towards the rare side, and these where thick steaks too.

It was a little too firm for me. I think it could have been more tender and not so well done. I guess I like mine more towards the rare side, and these where thick steaks too.

Kinda sounds like next time, with the same cut of meat, a bit lower temperature and a longer cooking time should get you closer. 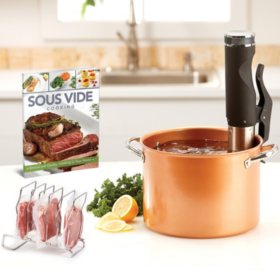 I’ve been using a Sous Vide Supreme for a few years now and am fairly satisfied with it. This cooker’s water bath does not use a pump for water circulation.

SousVide Supreme is the world's finest water oven for home cooks and culinary professionals. The all-in-one, easy to use sous vide cooking appliance for per

I don’t think you’ll find much difference in the cooking temperatures or evenness of heating in the wand type vs the enclosed units. They both work very well.

As for the noise, I’ve never had any issue with that. Mine is so quiet that I have to listen carefully, in the same room, to hear whether it’s working at all. The refrigerator running is way louder than the sous vide. Maybe some models make a lot more noise. Mine is very quiet.

Yeah, my SVS Demi was silent.
That said, it’s hard to cram a rack of ribs into the water oven, while it’s much easier in a cooler or a large cambro.

My Joule can be about as loud as the fridge when you’re on top of it. But I run it mostly in a second bathroom that one of our cats eats in. On long cooks, like Peachy, saran and a towel over the top.

One item I use my Sous Vide cooker for is to hard boil eggs. I cook them at 170 deg F for 2 1/2 hours. They turn out very tender, not rubbery. I noted the 170 deg F temperature from “The Food Lab” cookbook. The Food Lab Cookbook states the following;

From 30 to 140 deg F: As the white gets hot, its proteins, which resemble coiled balls of yarn, slowly start to uncoil

At 140 deg F: One of these uncoiled proteins, ovotransferrin, begins to bond with itself, creating a semisolid matrix that turns the egg white milky and jelly-like.

At 155 deg F: The ovotransferrin has formed an opaque solid, thought it is still quite soft snd moist.

At 180 deg F: The main protein in the egg white, ovalbumin, will cross-link and solidify, giving you a totally firm but still tender white.

Beyond 180 deg F: The hotter you get the egg, the more tightly the egg proteins bond, and the firmer, drier, and more rubbery the egg white becomes. Eventually, hydrogen sulfide, or that “rotten egg” aroma begins to develop. Congratulations: your egg is overcooked.

I’ve also heard @richard & @carl (2KetoDudes) mention in a podcast they Sou Vide eggs at 063 deg C (145 deg F). I believe this results in the whites being cooked, but the yolks remain liquid.

Looks wonderful! Just got my Joule from Chef Steps. My first project will be this and also trying to tackle Starbucks Sous Vide Egg Bites. Then on to steak!

The storage space for an immersion Sous Vide cooker is also a lot less than for the Sous Vide Supreme.

I believe another difference between the various immersion Sous Vide cookers is their power level. This would impact how quickly they can bring the water bath up to the specified temperature.

Mine arrives some time today as well. I was going to break it in with a New York or ribeye, but got an unexpected visit from a friend who just came in from out of town and wants to meet up for some drinks and do dinner downtown. Looks like I’m going to have to wait till this weekend to test it out, and now I am very sad.

I tend to like my food way more we’ll done than many. I like my meat tender enough that I have little use for a knife.

I remember an article in the New Yorker years ago, profiling a dining-car attendant on the old New York Central Railroad. The most memorable thing he said was something to the effect of “Back in the old days, when you brought a lady a steak, you never gave her a steak knife, because that would have insulted both the lady and the steak.”

Whoops! Thanks for catching that. I like all three of them, and I’m easily confused . . .

It’s not the weight, it’s the thickness that determines your cooking time. The thickest part of your steak - I usually add at least an hour to what’s recommended (or double it if it’s really tough) - to increase tenderness. 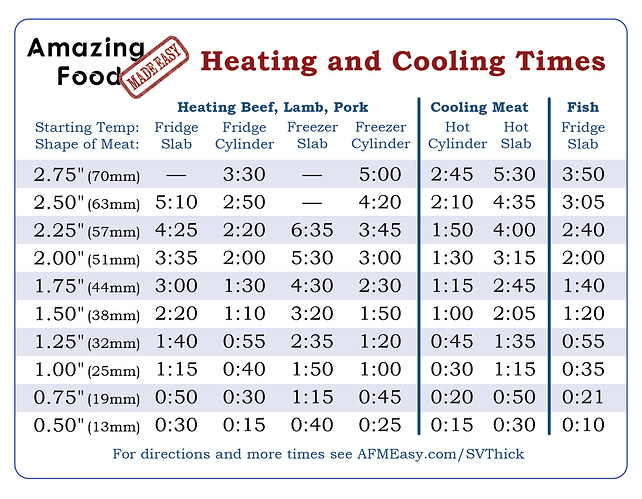 The one thing you need to remember though 127F is the point that most pathogens die. You really shouldn’t cook any meat below 129F for more than 2 hours without risking some pathogens actually growing in numbers. 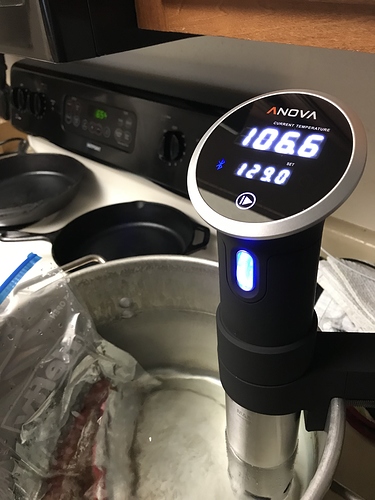 Between you and all the videos I’ve watched, it was easy! Took it out of the box, found a pot, added water and turned it on. Then prepared my steak and put it in, then I went and took a shower!