I came here looking for a chuck roast recipe to put into the smoker, I found the old thread:

Holy crap, Sous Vide is a game changer - chuck steak literally as tender as filet mignon. 48 hours at 134° then drained, oiled, and finished on the grill.[image] 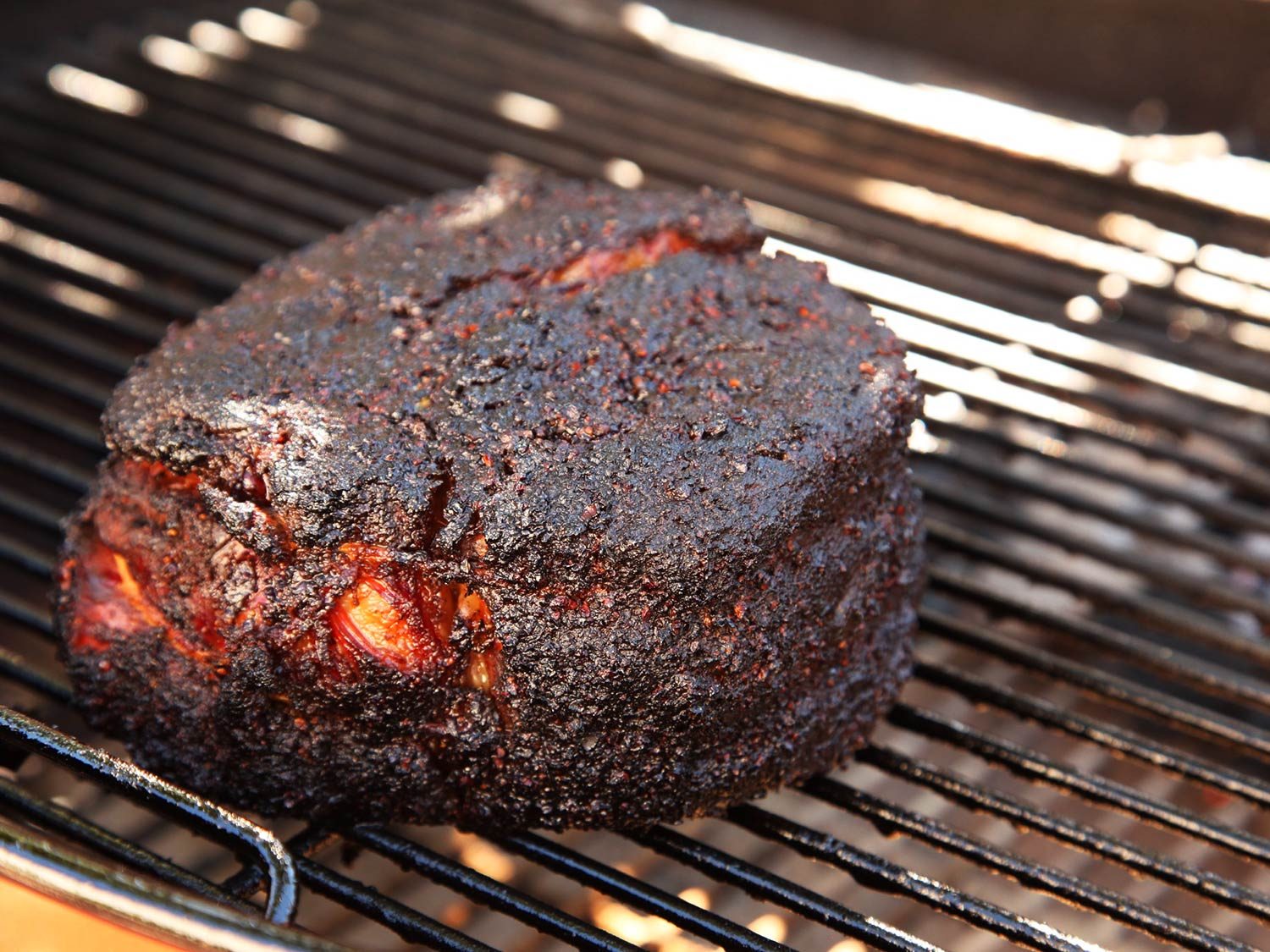 Beef chuck is an excellent alternative to brisket for barbecue. It's easier to find, cheaper, and more foolproof. Cooking it sous vide before smoking makes it even more foolproof, guaranteeing you tender and juicy results.

I think this is going to be my first attempt. In fact, since my forecast is for a cold front to come through and it to be rainy Sunday (which is not a good match with an electric smoker). I think I’m going to put it in the water bath at noon tomorrow, run it at 135 until noon on Monday, then pull it out, ice bath, and into the smoker for 2-3 hours. Should be ready around 5 on Monday, give or take a little slop in the schedule.

Oh great, wizards of the sous vide: I ask if this sounds like it will work to you?

Surely no Wizard, but it does indeed sound good! … I’m actually planning my next SV-meal to be around 75 degrees, and only say 3-4 hrs. instead of the longer runs. - I did 145 last time, and I’m pretty much cutting that in half to hopefully find my happy medium. Like em’ tender and light pink inside, but tortured outside! (But this may take a couple meals

)… But it will be going on the Grill to be flamed kissed to finish it off too. Plus, I don’t presently have a smoker anymore. But I do plan to get another one, but just haven’t done so as of yet.

I don’t have a smoker yet but it’s on my wish list.

I do like a good piece of chuck, though. 139 degrees for about 48 hours after a night in the fridge having been dry rubbed… that’s some really good eats. It’s probably somewhere between a medium rare and a medium but that’s about how I like them.

It’s probably somewhere between a medium rare and a medium but that’s about how I like them.

I think giving it an ice bath before pulling it out of the bag to get the middle cold again is a good thing. That way I’m sure that sitting in a 225 smoker will just give it a nice smoke flavor and a good bark without over cooking the interior.

It has begun. The roast is in the water bath now, vacuum-bagged with just a layer of salt, peppers and garlic powder. 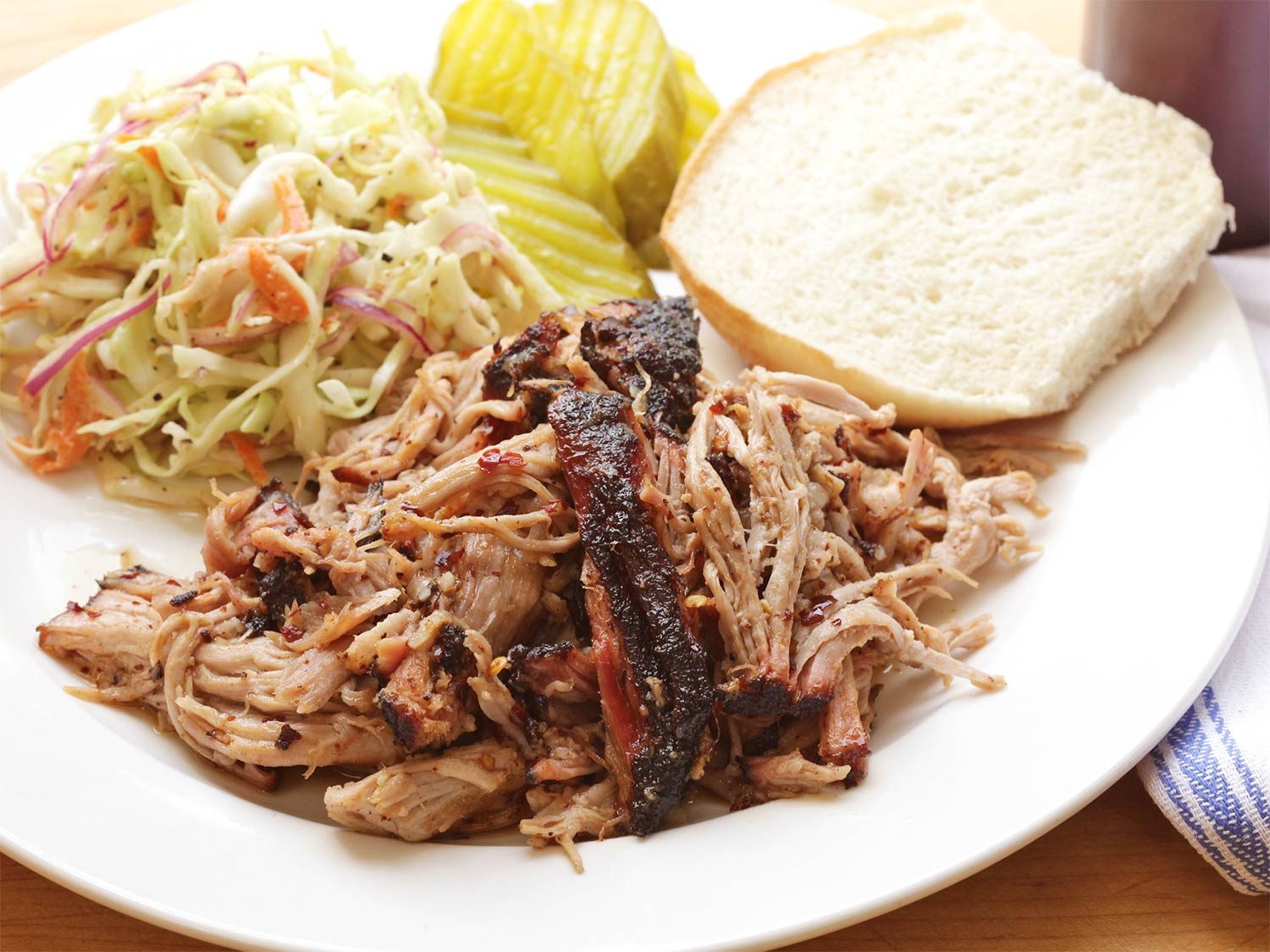 Don't get me wrong. I like a good slow-smoked, true barbecue pork shoulder just as much as the next guy. In fact, I probably like the process way more than the next guy. Still, there are times when we want things a little more streamlined, a little... 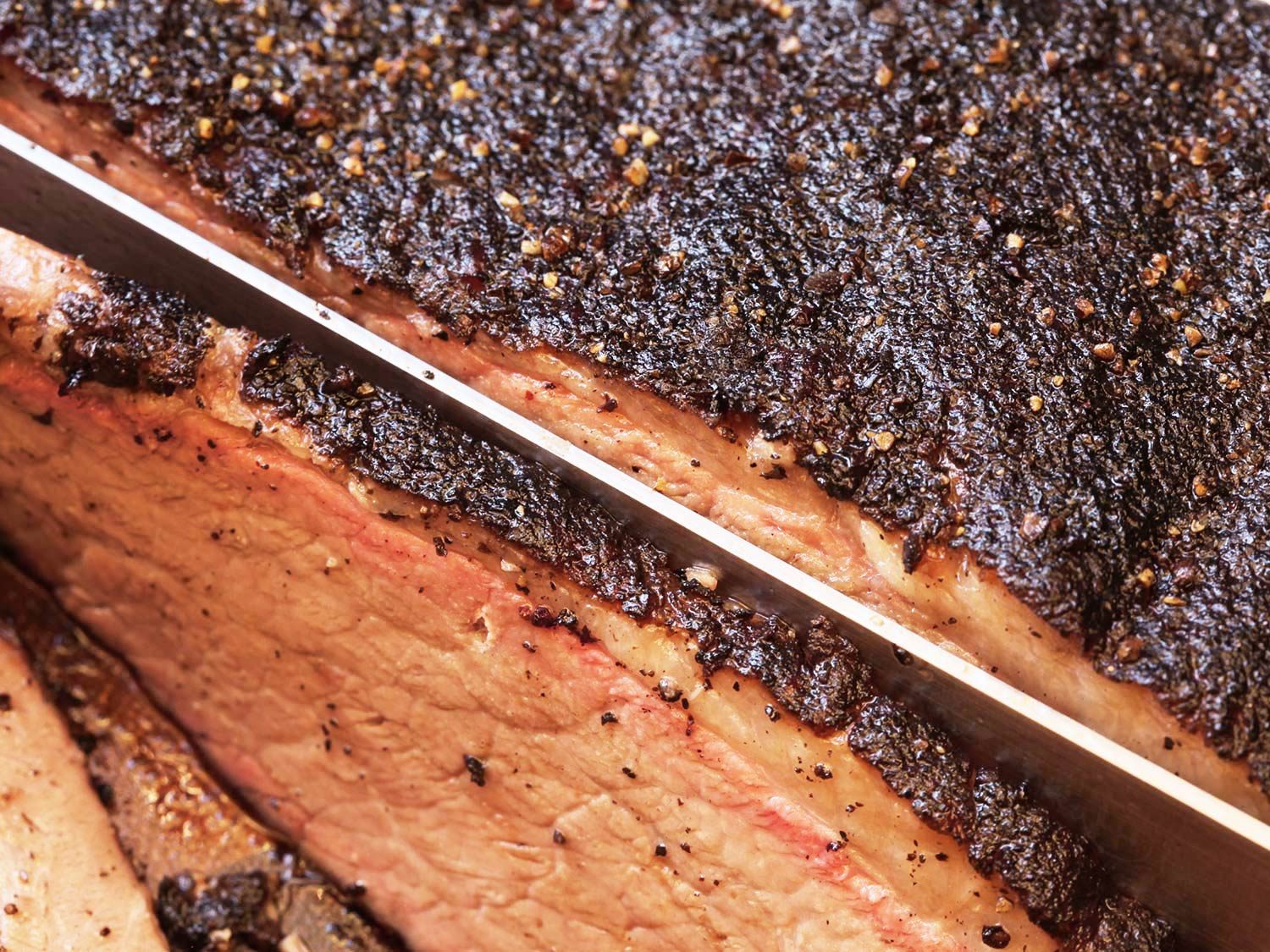 How to Cook Sous Vide Smoked Brisket | The Food Lab

Good brisket is often called the Holy Grail of barbecue—an apt description, given how rarely you find good smoked beef brisket in the wild. Sous vide cooking changes all that by allowing even a novice to produce brisket that's as moist and tender as...

Both are fantastic and the best I’ve ever had - anywhere.

Oh yeah, for both of these, we cooked in the sous vide the required time, then cooled and refrigerated, and then smoked.

One of these (not the pork) will be on the menu for Christmas day.

Good to know those recipes are good. It might be that their 36 hours at 155 makes more like a “pulled beef” consistency while this will be more like a filet, but we’ll see.

I picked up about a 5 pound brisket flat at my local “bulk and bundle” store (as Marge Simpson called it). That will be an experiment in a week or three. Our local Publix grocery store had the chuck roasts on sale, so we grabbed a smallish one.

It occurred to me too late for the earlier post that this is the Internet and on the webz, they say “without pictures it didn’t happen”. So here 'tis. 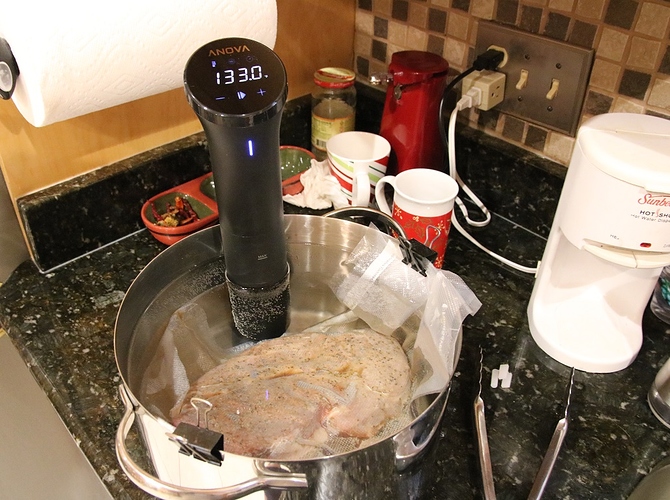 I find it interesting that the 133 degree water is turning the outside of the roast more of a gray than the “medium rare pink” I was expecting. All I can do is Keep Calm and Sous Vide On.

I don’t know why he used the 155, that seems high. What I usually do is follow the recipe pretty much exactly the first time, and then try variations later, unless the original version is perfect (as those two linked above are).

I’ve cooked the beef chuck at 130-135 many times, for the recipe here by the 2 keto dudes, and I do think it’s a little grey on the outside, but pinkish on the inside. That’s also a great recipe.

What I usually do is follow the recipe pretty much exactly the first time, and then try variations later, unless the original version is perfect (as those two linked above are).

That’s almost word for word what my wife and I say.

The experiment ended yesterday almost exactly as planned, except for a bizarre problem I had with the smoker for the first time ever. I pulled off a little of one side and did a fork test to see if it had a good pulled beef consistency and it did. 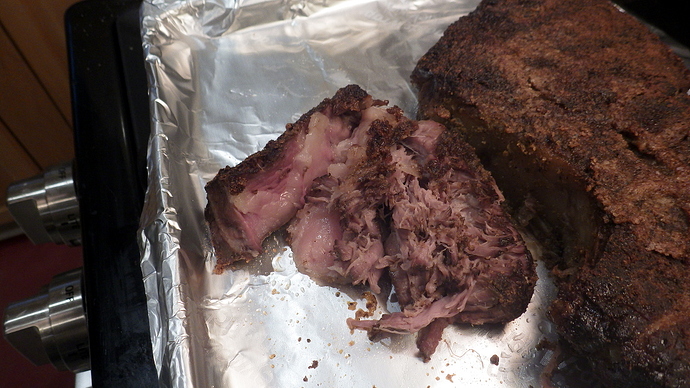 It kept a good pinkish color like a medium rare roast, got a good smokey flavor in the three hours it had and the texture was on the line between being good for pulled beef and a tender roast. All in all, I’m quite pleased with how it turned out. I’ve tried one chuck roast in the smoker before and it was a disaster compared to how well this turned out. 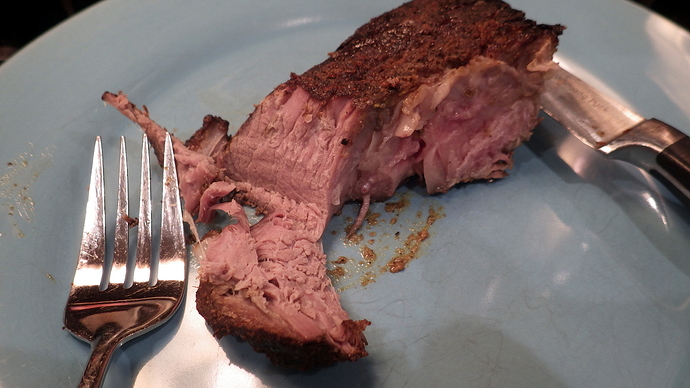 When I took the chuck out of the sous vide bath, it went right into an ice water bath for most of an hour, and when the roast felt like it was cooled, pulled it out of the bath and out of the bag. The parts that were in contact with plastic (virtually all of it) had more of a cooked “grayish” color than the expected pink, medium rare look but wherever I could see the sides of muscles I could see that pink color. I rubbed it with yellow mustard and then a kind of our regular barbecue rub base: kosher salt, Mr. Pepper (mixed pepper blend), and garlic powder. Into the smoker with the chamber set to 225, the internal temp of the roast was 47. I used about a 50/50 mix of hickory and apple.

I went out to get a look at the chamber and internal temperatures with about a half hour left and found the system was off and the chamber had cooled to the mid 150s. It might have been off a half hour. It has never turned itself off before so this is a new one on me, but after a brief run in the oven we decided it was cooked about as well as we would have thought.

I’ll call this a successful first sous vide experiment. Now it’s time to try to figure out the next adventures with the sous vide cooker.

Looks great. I will have to try this one.

The grey is normal with any sous vide meat. Even pork does it. Searing it browns it up and just underneath is that beautiful deep medium rare pink.

I’m getting that impression.

I spent months deciding to go this route, and in my mind thought of it as almost like the reverse searing method some dedicated barbecue guys use. This morning I was on Amazing Ribs and find Meathead calls reverse searing “redneck sous vide”. So I can do it both ways.

I think the next “sous vide cue” will be beef short ribs. 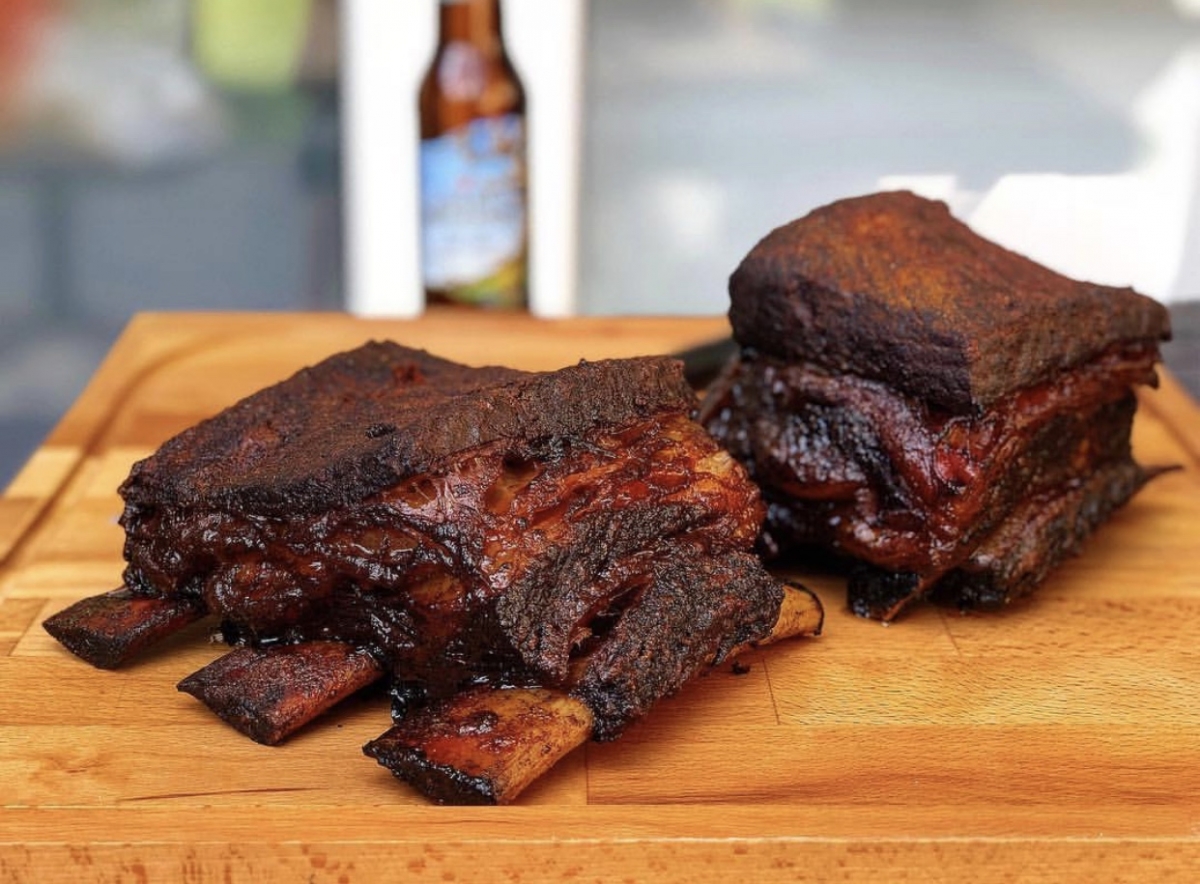 Unbelievable beef short ribs! So juicy, tender and smokey! Paired with the Anova Sous Vide Precision Cooker, this is the best BBQ ever.

First one I tried, I used the recommended temp of 145, but found it appeared grey throughout. No pink at all, so was going to cut that in half the next time, using 75. Will have to find that happy medium to where I like it. Plus, I like to throw mine on fire for the searing.

… But presently Fasting, so won’t be for a bit.

I feel like something else happened. Did you check the temp with a thermometer?
Are you saying you’re going to cook something at 75°F?

There’s a time/temperature relationship for killing of bacteria. You have to hit 130F+ to kill bacteria, and that temperature has to be held at least 2 hours. That’s why cooking at above that temperature for multiple hours works (in addition to the other things it’s doing to the meat’s structure).

Gee, I didn’t even notice that, since it wasn’t addressed to me. I think 145 is well into the medium range, so it will have little pink. 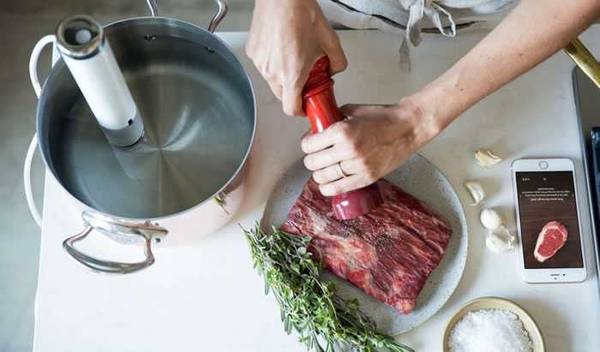 Sous-Vide-Que: Marrying The Grill And Smoker With Sous Vide

Ensure extraordinarily tender, juicy, safe, and flavorful foods by marrying water and fire via our sous-vide-que cooking method. Sous vide is a modern way to cook food to perfect temperature, but by combining it with the grill and smoker you can take...

Unless you meant 75 minutes?

Sorry for the confusion guys. In my rushing to do too many things at once, I forgot to add the time I allowed it to cook in the bath. - So yes, the temp used was set at 145F, based off the booklet that came with it. (Plus I bumped it up just 5 degrees more than the suggested 140, since the wife likes her steak more well done) And according to time suggestions, it stated a recommended cooking time of 2-3 hrs.?Which also appears to be the set recommendation for most things in the book as well? (Not knowing what would be best, I kept mine in for 2.5 hrs.) So I was saying I figured to try half that, (75 min.) and maybe just check it every 15-20 minutes or so? Or is this incorrect? (Remember, I’m new at using the Sous Vide cooking method too, so was thinking the longer it stay in, the longer it cooked through?) Though I do like well done on the outside, I do like to keep it somewhat pink on the inside, to help keep it from drying out. But we always used to do well done for the most part, but the booklet that came with it, appears to only stay around the Medium/Rare to Medium area range.

Again the meat was indeed cooked all the way through, but like I said, not pink at all? And no @MiKetoAF, I could not find our thermometer at the time, but do actually remembering mention this to my wife as well. Because I thought the Medium setting should have shown some pink still? Unless my bumping it up to 145 instead did this? But since I couldn’t locate it, I could only assume the temp shown on the device was correct?

Here’s the booklet that came with it… 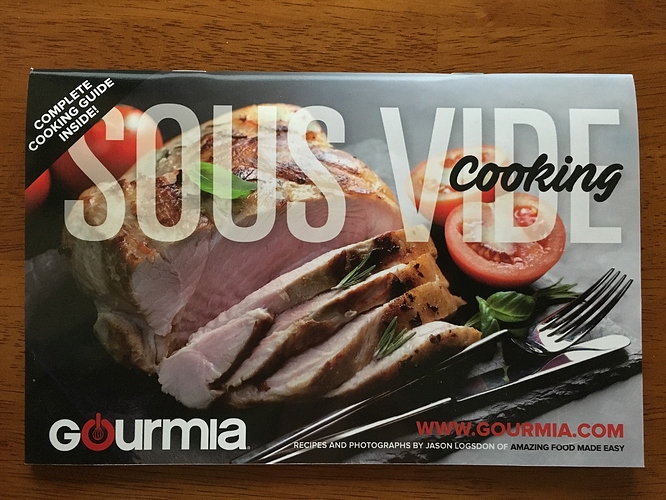 And an example of recommended Temps and Times shown in the book. (Which again, seems to be same for a lot of the steaks, with only a few exceptions. They don’t show any Temps/Times for anything else, but MR & M. 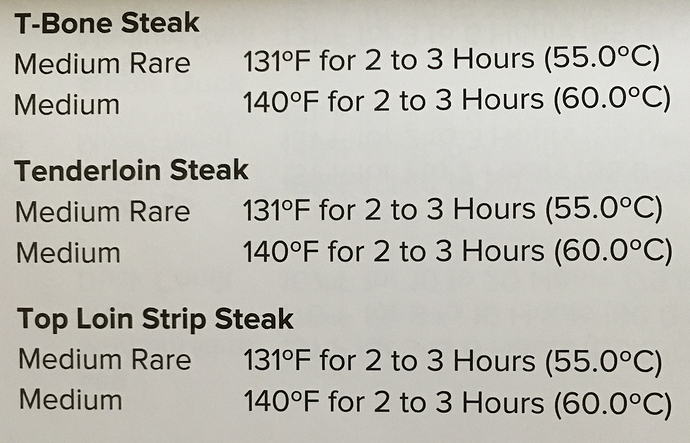 Thanks again guys, I will check back shortly. Hopefully I clarified this a little better this time.

A good way to remember - temp controls doneness (you can’t “overcook” something sous vide) and time controls texture. I would try 135-140 next time and see if it closer to what you want. FWIW I cook my brisket at 155 but for 36 hours.