When it’s hot, it’s easier not to eat.

I never understood this but I know people often are like this.
When it’s hot, I want a lot of fatty protein just like on any other day… I may have no appetite but my body surely wants its fuel.

Surf’n’turf isn’t a thing here. Some people eat fish sometimes, it’s one of the traditional Christmas stuff but most prople probably don’t. I wondered about fish… So expensive for being some light stuff tasting worse than pork… So it’s not for me. Maybe one day, I have a few recipes for hake, it’s a pretty tasteless fish (as almost all is that to me. lean meat just can’t be good for me, I don’t know how tuna pulls this off but that needs a ton of fat added too, not for taste but for the right fattiness) but it gives me some variety once in a blue moon, fish is soft and one has spices and tasty fats…
We will only eat a tiny salmon, that’s nice and not lean stuff!

And I bought bacon. It’s supposed to be tasty as I chose the winner of a Hungarian bacon test. We will see.

How do you make the streamed pudding in the pressure cooker. That looks perfect.

The recipie is equal eggs and water or cream or milk or bone broth for savoury… I used plain water
sweetner or vanilla essence if you want it sweet for desert (I didn’t add any…)
My one was 2 eggs which is about half a cup then 1/2 cup water blended together poured in bowl cover with aluminum foil place on rack in pressure cooked with about 1cup water in bottom on high 10 mins… if you use more eggs and more water up your time by 2 mins for each two extra eggs.

Today I had a lay in till 9.20 as I had a late night and not good sleep. Mornings are so dark and thats when I seem to have my best sleep lol.
Decided as there was space available in the CrossFit class I would get my ass into gear and go. It was a 10am start and I just made it in time. Pairs workout you go I go split and it felt good.

Came home for a brew, finished my little school chair and popped it outside with all the other weather protected stuff I did yesterday. The little birds look great nestling in the planters. 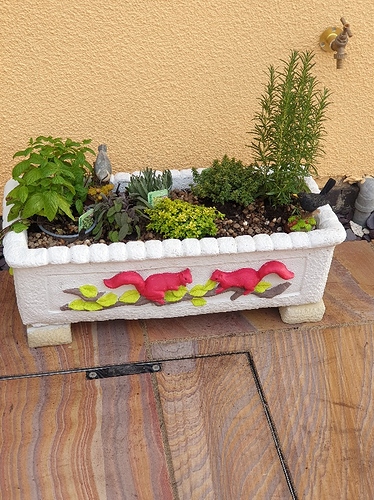 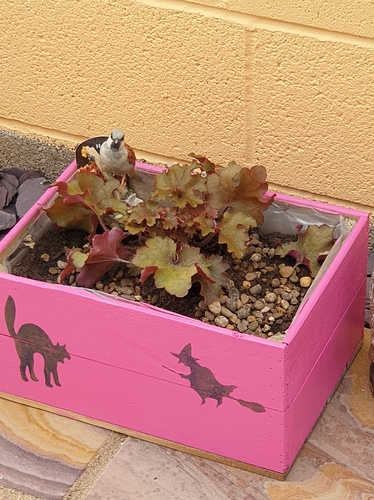 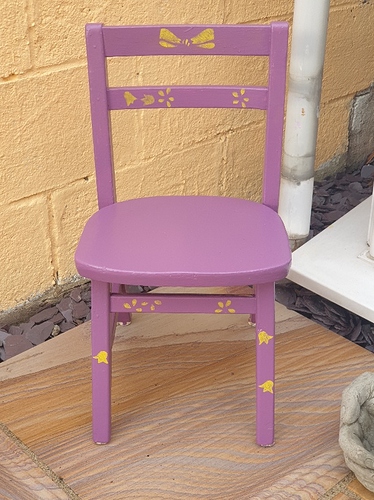 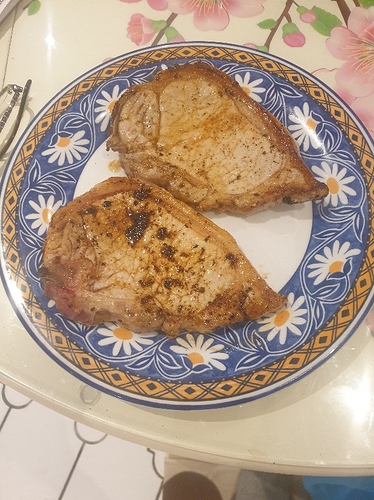 Brunch was last of the cold pork shoulder, yummy to the end and some nice cheese.

Dinner was the two pictured pork loin chops bought in a pack of 6 reduced in Lidl today… also bought a nice big leg of lamb to contribute to my daughters boxing day meal shes making for us all. We generally celebrate Xmas on 26th as she spend Xmas day with the in laws.

And I just see this now. Nice, polished stuff

How cold does it get during the winter where you live?

Got a surprise call from a local farmer which was good timing because neither of my other large orders have come in and I really only have heart and spleen bacon and salmon left. Getting grass fed beef hearts, tongues, diaphragm , kidneys and cheeks this Friday Not a lot of each but enough to last until the larger organ meat order comes in January. Bit of muscle meats on Friday plus a lot more sometime soon. Here’s some of my meals. Mostly Buffalo heart, beef spleen or thymus with small bit of liver and marrow 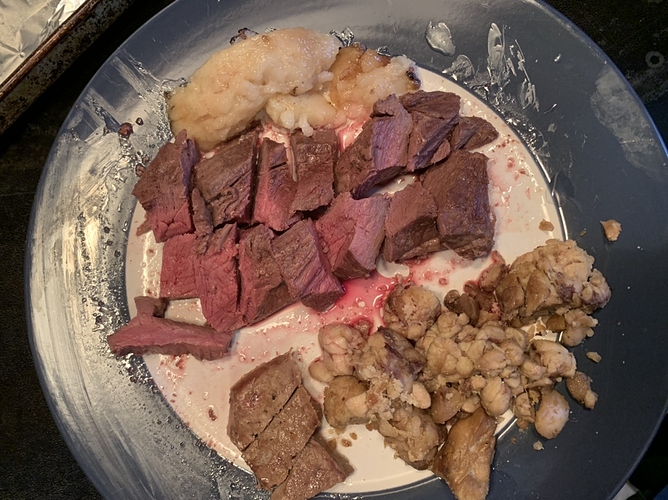 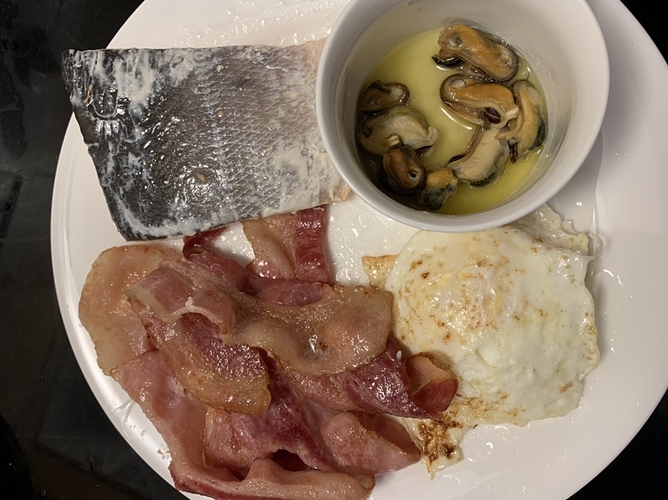 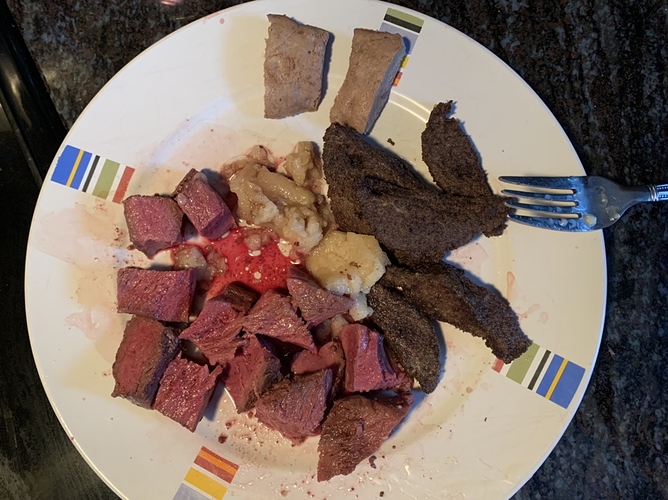 I am ridiculously squeamish about all those organ and weird things like tongue, etc. Your photos equally impress and repulse me. The only comparison I can come up with is teenage boys, lol.

I would rather deal with any food than teenagers.

@Karen18
you sure are making your garden spiffy! nice pics. You are doing a great job making it so pretty

ribeye steak and I am in the mood for chicken wings. Have to run errands and will pick up a jumbo pack of big wings. I got a small hankering for sardines also, so probably will eat a tin or 2 of those.
Done deal, easy peasy food day.

Depends on what type of winter we are having i suppose … 2018 was the year of the beast from the east and I had to keep getting on my flat roof to defrost the pipe from the gas boiler to get my boiler working. I have lagged that now so hopefully it won’t happen again. Probably went below -10 but wind chill was lower still as there was a dreadful wind with it. Usually thr lowest is about -7ish where i live. Doesn’t sound bad in comparison to some places but it is always a wet damp cold. I can remember winters in Berlin where the snowfall was quite bad but it was a dry cold and never felt quite as cold as over here. Trouble is with out weather is it goes from nice and mild one day yo wet windy freezing and sometimes four seasons in one day, its just very unpredictable and forecast is often wrong lol.

Popped to local town today to pick up a last minute present for my boy (my 36yr old boy that is hahaha) also some extra large hooks for project in garden and picked up 3 jumpers in charity shop. Home to cold ham n cheese then for dinner I ooked up the remaining 4 pork chops that I got reduced price yesterday and ate 3 of them. Couldn’t manage the 4th lol.

Rested this afternoon with some codewords and now can feel the affects of yesterday’s CF session. Quads, glutes and lats all feeling the good pain haha.

@Fangs yes garden getting pretty but just outside back door lol. Still a biyt barren at the back where I need to get in some trees and shrubs and some climbers, we will get there … weather not forecast good for next couple of weeks… just rain rain and more rain and also possible snowfalls and very cold. Brrrrr I hate wet, windy and cold so it looks like a lot of staying in the warmth for me

That’s pretty chilly. I’m surprised you can plant anything.

Yeah just don’t want to waste my pennies if the more expensive trees and shrubs die after I have plante them especially as they will all be in containers/planters.

I think this week is just going to be too hard to omad. Too much temptation all around me. I did cave to temptation yesterday with a jar of nut butter and ate the whole jar. It was a very clean nut butter, was only a 10 Oz jar and only caused a headache, but I know me enough to know I still can’t handle it and should have prepared myself better for it. But if I’m being completely honest with myself, I wanted it, I knew I would eat the whole thing, and I was ok with doing it. But in looking back at it, I know doing things like that will 1. never help me reach my goals. 2. Never help me truly heal from binge eating disorder. 3. Open my body up to be susceptible to certain

going around. 4. Make me feel poorly, even if it’s just a headache. So I need to remember those points and not the “hey, at least it didn’t make me sick to my stomach”. The day before, I had binged on some other foods. Reflecting on that, the salad that I had at lunch had opened me up mentally to where I went. I have to accept that although some of these non-carnivore foods may not hurt my stomach, that doesn’t mean they aren’t hurting me.
So anyway, today I had slow scrambled eggs and bacon, plus thin cut ny strips topped with a little butter and blue cheese for breakfast. Then a large tuna for dinner. The tuna was fresh caught and frozen by my husband’s coworker. Very delicious! 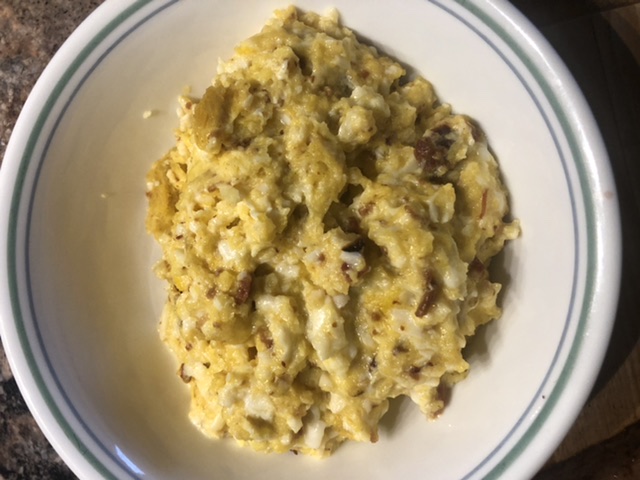 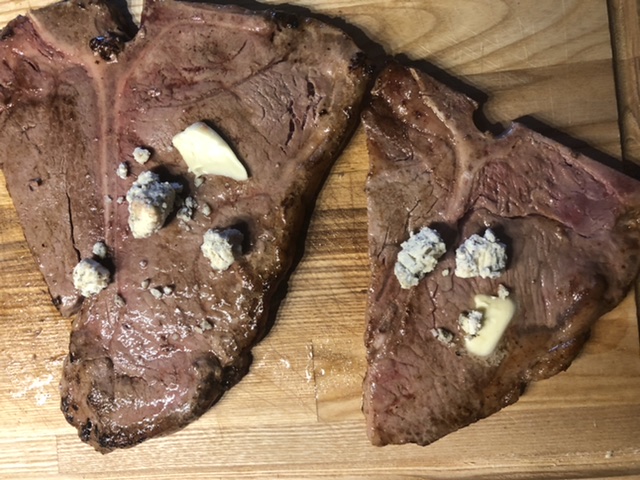 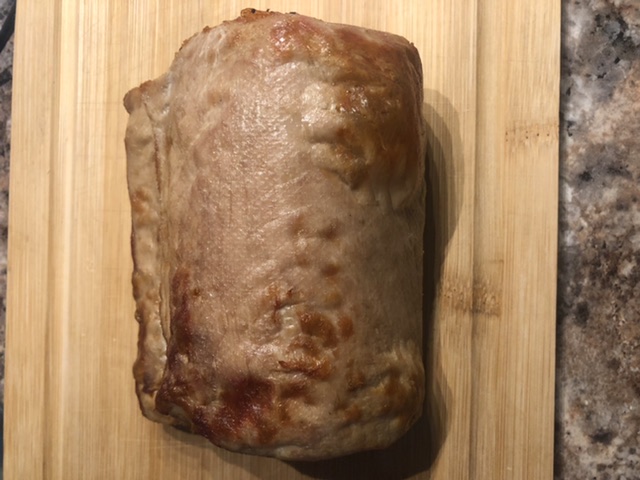 Sometimes I think that when we totally “blow it” and eat a whole bunch of a no-no… it’s actually a good thing. It reminds us why we can’t have just a bite. And reminds us how we feel after.

This is exactly why I must be very strict with myself. Nothing sweet can pass my lips because I know the spiral it sends me down. The last time I had something sweet was July 16, 2020. The days are no longer a struggle before, like they were back then, when I was “cheating” every few weeks.

Tomorrow is my last day of quarantine. Woohoo! I am really struggling to find my foods but palatable right now. I know I’m not eating enough (I feel nauseously hungry), but the food just isn’t appealing. My sense of taste is very different right now. The foods I usually love, I have no desire for and everything seems to cause my stomach to gurgle. It’s very frustrating, but I’m grateful to have had only a mild case of the virus.

Sometimes I think that when we totally “blow it” and eat a whole bunch of a no-no… it’s actually a good thing. It reminds us why we can’t have just a bite. And reminds us how we feel after.

Food as nutrition. Food as medicine. Food as punishment.

Yahoo! Welcome back to the world!