Hey @David_Stilley I’ll have you know I do like to cook for others, just not myself

I do remember how proud you were of the Rib Eye meal you made for everyone last time.

Maybe try this one

Anybody have a recipe for keto gravy?

What kind of gravy do you want?

What kind of gravy do you want?

Am I missing something here? I think it’s because of that wry cowboy smile.

So, first things first.
Base for the turkey gravy is currently in the oven roasting its wee lil brains out.
Now I know most people just wait till the turkey is done then use the dripping and add some thickener etc… (Or use the abbomination that is bisto… we wont talk about that)
But I found out years ago that pre-making a base for the gravy (& this can be done way ahead of time & frozen if you like) makes for a kick ass gravy & much easyer to do on the day. (I fully admit I got the idea from that whiney lil Jamie Oliver but mines better)

So, large roasting tray, chop a couple carrots, 2 onions and some celery and toss in, add cranberries, rosemary, sage, tyme, a couple bay leaves, allspice, 1-2 star anise, couple cloves of garlic and a couple slices of good bacon chopped up. 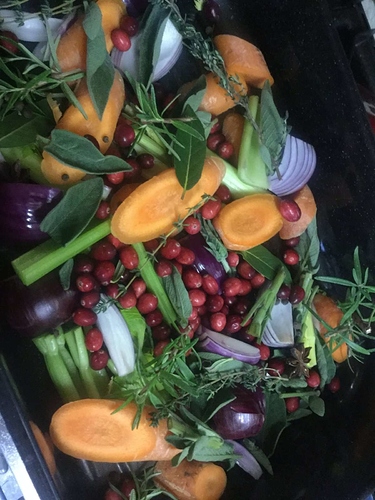 Bash up some chicken wings (about a dozen & you want to break/crush the bones to release the flavour) and any giblets/neck from your turkey if avalible, Throw them on top. Toss in some suet (screw your “healthy” olive oil jamie!) salt & pepper 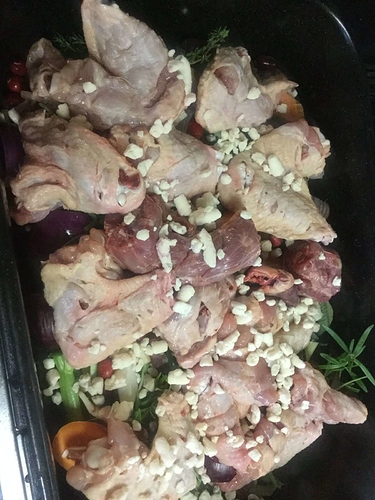 Done roasting, pop on gas, splash of dry Sherry(dry) 2 splashes Port, add water. bring to simmer scrap bottom, then give a stir every so often, top up water to keep simmering as needed. 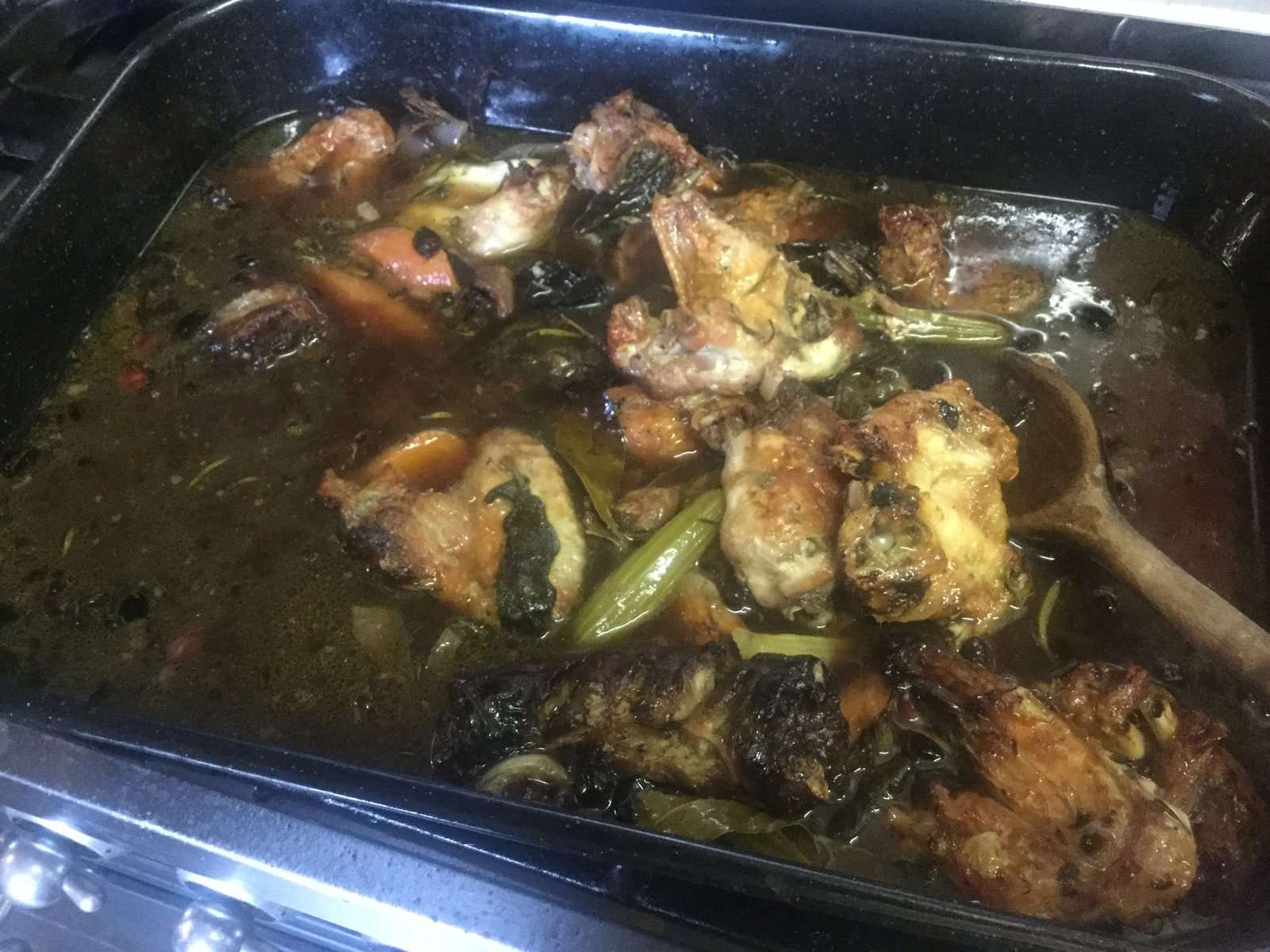 Contenue stewing the gravy base, once it starts breaking down, start reducing. 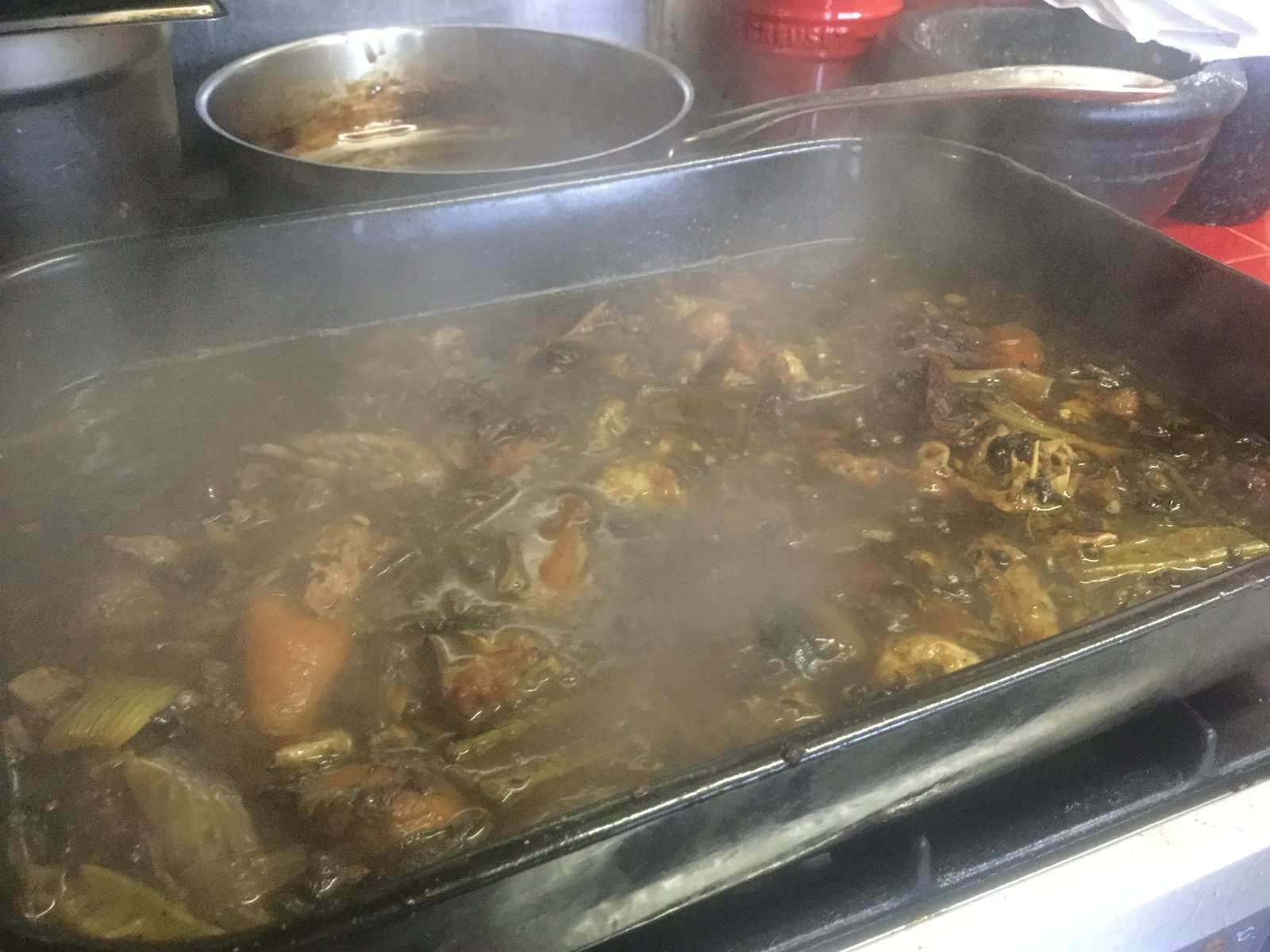 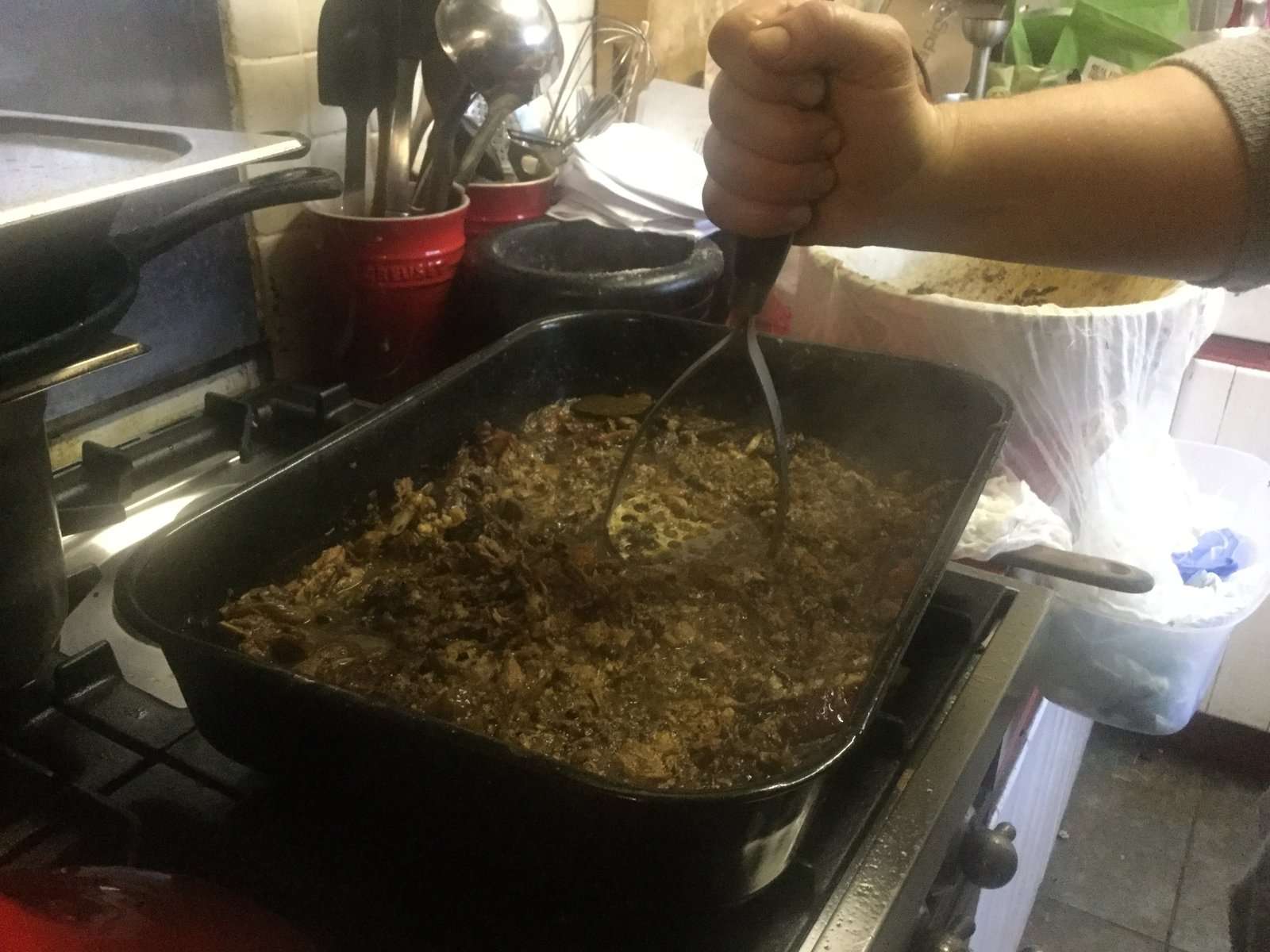 Strain off liquid through a cheesecloth or fine seive etc… (waiting for it to cool off enough so I can squeeze out as much liquid as possible without cooking my fingers.) 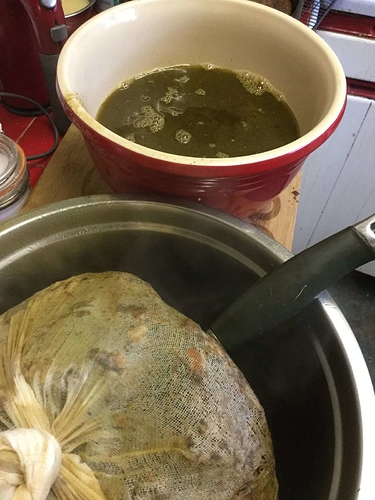 o the gravy base. so need to add something to thicken (im a bit gluten intolerant so will be using xanthum gum but you can use flour) make it a bit thicker than you want the end product… store in fridge.
Take out when ready to make up, pop in a saucepan & heat, add the drippings from your turkey… give a good wisk. Done.

Well that looks great @runswithdogs and also more work than the entire remainder of the dinner!

I just use the drippings!

This is my favorite gravy of all time. It uses chicken drippings but it is so delicious! You can save the chicken to make chicken salad or something or leave out the chicken and add turkey drippings and reduce the time on it. 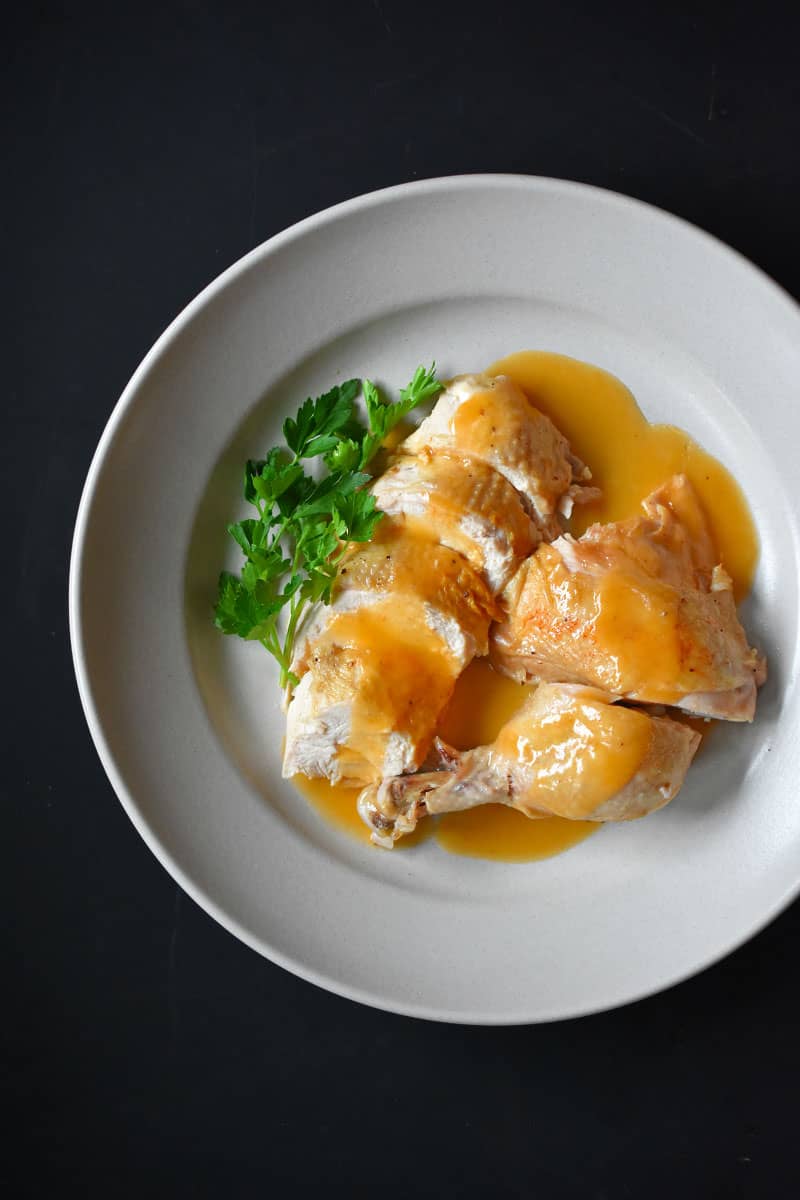 Yep: you can cook a whole chicken in the Instant Pot, and make an amazing Paleo-friendly gravy at the same time. Instant Pot chicken and gravy, y’all!

There’s also a slow cooker version on her site. I do omit the arrowroot powder and have never had a problem with the gravy getting thick.

I just use the drippings

I usually make the gravy base a couple weeks ahead of time and freeze it so it just needs thawed and the turkey drippings added at the last minute. I like to cook so holidays are an exscuse for me to go a bit Nutz

You gravy people are serious!

I found this on the internet for “keto gravy with xanthum gum.” Will test is before the big day to see if it is good. Got 5-star rating (25). This is more my speed. How important can it be? If people don’t like it, they don’t have to eat it, or they can make their own dam Thanksgiving.

Did a test run of the above gravy recipe yesterday. Made it with beef stock instead of chicken. It was delicious and could not have been easier (or economical). I will try it with chicken stock before Thanksgiving, but I am sure it will be just as good.

@gingersmommy Did you mix the Xanthan Gum with a bit of oil before adding it to the simmering gravy or make a roux with the butter?

I melted the butter alone and then just sprinkled the xanthum gum over top and swirled it around to mix. For the above recipe, I only used approx. 1/2 tsp. of x.g. For me, it gets too thick otherwise. I probably reduced it somewhat as well. It really was excellent, for the little it entailed.

Love the sound of these! Where do you purchase confectioner’s Swerve? If I can’t find it, I will order it online.

I get mine from wegmans

Great! We have Wegmans! Is this in the health food section?

That looks delicious! Pinned the recipe and plan to make it for Thanksgiving (and/or Christmas).

Where do you purchase confectioner’s Swerve?

The WalMarts around me have it.