Eventually my byfriend drove 2 hours on ice to make sure I was ok, and was able to get my truck out and in 4WD so I can drive to the hospital if needed.

This dude’s a keeper!

Do you know if PKD diet suggests aiming for a particular blood ketone:glucose ratio?

For therapeutic effects higher ketones and lower blood glucose are the goals. It’s probably higher in the thread. I think 1:1 is mentioned?

I heard on a podcast that dove deeper into anti-epileptic ketogenic diets that ketogenesis is driven higher by using refined seed oils as the fat source. This was for controlling seizures and in 2020 we can see that it is a health trade off. I mention it to be wary of chasing ketones in ways that might have side effects, if chasing ketones to hit a ration. In the PKD diet the doctor talks a lot about using pork fat from a traditional Hungarian breed of pig. That also raises concerns with the difference between USA pork and Hungarian pork in terms of fat quality.

I tried searching this thread for it because I thought someone had mentioned a specific ketone:glucose ratio. And I thought they were talking about not eating until their glucose got into the recommended range. But can’t find that convo.

Yeah, I wouldn’t be chasing ketones if I didn’t experience a benefit from it. That said, maybe the benefit I see is more related to doing exercise in a fasted state. Who knows. I sure as heck don’t

I don’t want to be chasing anything quite frankly, I’m just trying to figure out what my body wants/needs. But definitely am not going to be adding seed oils to my diet.

Dr. Annette Bosworth’s site has more information about GKI and cancer. I don’t think she invented the GKI, but the recommendation to get it as low as possible when fighting cancer comes from her.

Paleomedicina says ketones should be above 2mmol and BG below 4.5 all the time. Lower is better for BG, not sure if there’s a lower limit. I’ve seen mine as low as 2.5

Checking in to see if there are any practitioners still trying PKD.

An observation I make of n=1 of moving from a ketogenic diet that contains plant derived foods to a ketocarnivore way of eating where I avoid plant foods, is that ketosis is difficult to achieve and maintain. Often my blood ketones are just a trace at 0.1mmol/L, occasionally they are not detectable, despite eating less than 20g nett carbohydrates per day. This observation highlights the importance of healthy fat focus on PKD, and it would seem a focus on long chain saturated fatty acids derived from animal sources, more specifically. Hence the use of Mangalista pork as compared to the pork, bacon and ham we might eat in more western cultures. @Shinita what is the proper name for that pig breed, please?

We write the name as Mangalica but Mangalitsa has a way greater chance to pronounced correctly for the majority of English speakers.
I don’t know the right terms in English but using mirror translation it’s a “fat pig”, not a “meat pig” as many others so it’s more eager to gain fat than most of other breeds. And it’s fun looking with its curly fur. It’s hyped here since many years again but the local pig farm prefers selling mixed breeds for some reason where only one parent is this breed.

Hi there!
Just wondering what her immune repair range is?
Thanks in advance!
How’s it all going for you after all this time anyway?

llana_Rose hasn’t been on this forum for over a year.

ah good to know cheers.
Anyone else going well on this PKD diet?

What is the immune repair range for this diet? Boz ratio??

Was listening to a podcast where the people went to visit a bunch of hunter/gatherers like the Maasai and the Hazda. They took the ketone levels of them and got 0.1-0.2 mmol/l. A very low level of ketosis, even though they ate basically meat. Very few vegetables or tubers.

I think that’s the natural progression after a while: your body gets used to using ketones as fuel. There’s no reason to “make” 2mmol/l if you can get buy with 0.2.

For me, my morning ketones are 0.1-0.2 (stopped taking them, in fact), but they do get higher in the evening.

I wish they would have given the Maasai and Hazda CGMs. That would have been interesting.

I think that’s the natural progression after a while: your body gets used to using ketones as fuel. There’s no reason to “make” 2mmol/l if you can get buy with 0.2.

Dr. Paul Mason suggests that the ketones themselves are not really what we are chasing, what we want is the metabolic state that makes them possible.

I think I agree with him mostly, except that there is evidence that ketone bodies have beneficial epigenetic effects. Though I don’t know how much of each ketone is necessary to stimulate those effects. Possibly not much is needed.

I think ketones can also have mental effects for some, and they also help certain conditions (like migraines, where high ketones are supposedly beneficial).

As with everything, it’s complex and there’s never enough data.

For instance, why do some of us get such low ketones? I’m sure some of that is attributable (in my case) to lower fat, so it would be interesting to test a true PKD to see what happens. I’m not sure I could “stomach” (pun intended) that, as I have a hard time sometimes with fat digestion.

But I do know that even fasting multiple days, I don’t get the ketones I used to get. I could get 4+ mmol/l the morning of the 5th day; the last time I fasted 4.5 days, I barely broke 2.0 mmol/l, and only the night before the final day. (My ketones always go down in the morning.)

And even Dr. Bikman has said that any ketones likely means smaller insulin. (Though he also said fasting insulin over 6 generally means insulin resistance, and mine is usually 8-10 or so, though it’s highly variable.)

There’s definitely a relationship between length of time on the diet and ketone levels. But again, some people still get higher ketones than I do, even being on the diet longer.

I think exercise may also play a role. I never stopped exercising, so I’ve exercised hundreds (probably thousands) of times over the last 7.5+ years while being ketotic. Maybe that’s why I have lower ketones? (My muscles are great at ketone absorption/use?)

Too many questions, not enough answers…

I’m at work so I can’t look for the link until after I get home later. O’hearn discusses the variability of ketogenesis as it relates to the concentration of FA metabolism. Apparently the liver only synthsizes ketones when lipolysis is running at full capacity and there’s still more FA available so it gets partially oxidized into ketones. Link to follow later.

Update (10 hours later): I must apologize. I’ve spent the better part of a couple of hours searching Amber’s various blogs for the above link without success. I can’t devote any more time to the search.

What is the immune repair range for this diet? Boz ratio??

What is the immune repair range? Is it the Ketone to Blood Glucose Ratio? Aiming for 1:1 or more toward blood ketones for therapeutic effect.

Sorry, I didn’t mean you should search that long. If I knew what keywords to use, I’d search too.

I’ve been adding more fat (mainly suet) to my lean-meat lunches to see what effect this has. It might have an effect, but I’ve also restarted 36 hour fasts, though only one per week the last two weeks. Hard to tell what’s more important.

Due to having some issues, I also stopped taking anything other that Mg and vitamin D. This also throws a wrench into the works.

I stopped trying to calculate GKI when I realized I had ketones of 0.1-0.2 mmol/l in the morning. I never have a good GKI in the morning, unless I fast multiple days.

Now, if I take this in the evening, I can get a better GKI, but still not great. I just don’t make the ketones I used to.

This shows why, though for some reason I skipped the part showing 0.1-0.2 BHB every morning: 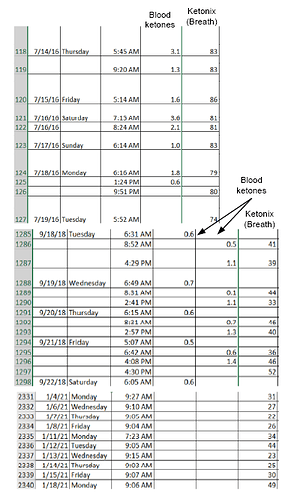 I’ll toss some BHB tests in, just for posterity’s sake: 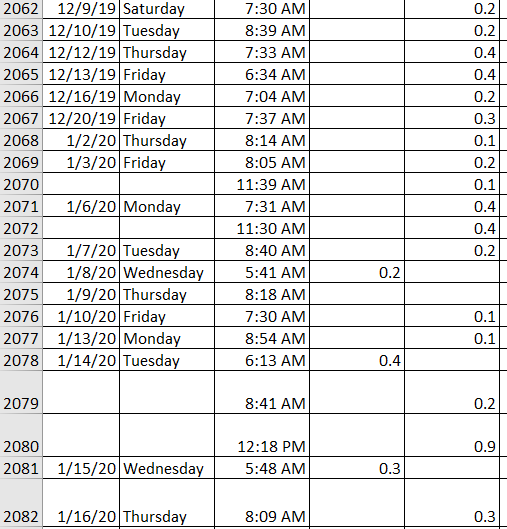 There are two entries, because I had two meters, one for home and one for work.

Still have not located the O’Hearn ref, but here’s something from Phinney/Volek that might help understand how/why ketone concentration varies; but it never actually stops! They mention FFA availability as related to ketone synthesis, although they don’t say the liver pathways must first be at max cap before ketone synthesis ramps up from baseline.

Dr. Phinney and Dr. Volek explain key terms and concepts related to ketones to give you a solid foundation with which to distinguish fact from fallacy.