But chronometer is telling you the macros not the weight… So your ribs had 18g of protein and 35g fat in terms of macros not weight. Visually you see they are about 50% fat, but when putting it on the scale how could you know how much of that weight is fat vs water vs protein. I think I’m even more confused now. it may be hopeless to try to explain it to me.

Also fat weighs less than protein s even if half of the ribs look like fat, by weight the fat would weigh less.

Or am I over-tinking this? Is it just macros and maybe the Paleomedicina group means macros when they say wieght and that it’s just a difference in language/word use?

But chronometer is telling you the macros not the weight… So your ribs had 18g of protein and 35g fat in terms of macros not weight.

Ok, I think I’m seeing your confusion now. 18 g of protein to 35 grams of fat is what they mean by the 2:1 fat to protein by weight. They say by weight to distinguish it from by calories. This is the macro. They are talking here about the actual fat and protein molecules like we do on keto and not about lean versus fat tissues.

But when talking about the 400 grams of meat you can’t use this method. In other words if you were to put twice as much beef fat by grams on your plate as lean you’d be having way, way, way too much fat.

I think coming from keto macros seem easy to us. But people going to Paleo-Medicina’s clinic or having consultations with them are given the tools to either eyeball it (35% white fat) or take the raw weights (1/4 of the weight is white fat).

Does this make sense now?

Or am I over-tinking this?

Only in the sense that you’re used to exact macros whereas they are trying to give a more quick rule so people don’t need to look up every meat. At the end of the day it all comes down to the blood measures anyway. If your glucose is too high they will tell you to cut the total food grams and if your ketones are too low they will tell you to increase your fat. Some people go up to 3:1. Nothing about the quantities or the macros are set in stone. Those are just the starting points. It’s all about getting glucose and ketones into the correct theraputic zones.

Ah that makes sense now, thanks for the explanation.

I’ve had a protein and coffee heavy week. I know I’m going to let the coffee go very soon. Had a score of 5.1mmol this morning

. My housemate is a doctor and he does not understand the diet, He does not see why keeping blood sugar so low would be beneficial. Does anyone know why it encourages healing? He has also expressed that he thinks Paleomedicina are a bunch of quacks. I find this offensive but can not offer up acceptable evidence of the diet’s efficacy, since all the “evidence” is self published case studies. How do you guys explain/justify why you’re doing this to other people? Not that justification is required of course.

He also thinks the amount of fat I eat is unhealthy. Well I think the amount of rice, honey, pasta and toast he eats, every few hours, is unealthy. He’s always hungry.

@Flub From what I’ve read, our bodies need either glucose or fat to run on so for those of us doing some form of keto we need fat for fuel. Your doc friend is fueling from carbs but we aren’t. There is an organization called, The Charlie Foundation, that uses a very high fat diet (very similar to the PM one) for folks with seizures or other brain issues. The story of how that org came about is worth reading. Charlie had seizures and nothing helped until his parents put the boy on the Ketogenic diet. I can’t remember if they worked with a major hospital at the beginning of the diet or not? https://charliefoundation.org/about-us/

Flub, have you read, “The Fat of the Land” yet? It tells the wonderful story of Mr. Vilhjalmur Stefansson and his “all meat” dieting days. Doctors had him and another friend of his eat nothing but meat for a YEAR while they tested and recorded their results. When Stefansson didn’t get enough fat he had diarrhea and felt ill but with enough fat both men did great.

IF I had a doc friend I was trying to convince, then I’d show him other docs who are joining the carnivore lifestyle. There are other docs out there as well.

Flub, I was 3 years keto and am almost 4 months carnivore. I’ve had a membership to “Diet Doctor” (another great website with various docs on board with keto diets) and read of M A N Y folks whose glucose rises with their protein intake. I’m not diabetic, yet even mine rises as the day’s meals happen. I don’t think the “experts” fully understand all of the ins and outs of this yet, but the ketogenic diet (high fat) has been around for decades.

Has your doc friend ever been around a patient with crohns? I have. Hanging around an IBD forum has got to be one of the most depressing things out there but PM is healing folks with IBD issues and other auto-immune diseases. Heck, there are folks being healed of IBD just by going plain ol’ carnivore.

I read the blog of one guy who totally got rid of his crohns by going carnivore for a year. He was inspired to do so by Mr. Stefansson.

I don’t blame your doc friend for being skeptical. When I was first going keto someone was doing an all meat May at My Fitness Pal and I thought they were nuts, LOL. All I know is that even 3 lovely years of regular keto did NOT get rid of my bowel issues. After only 3 months (and PM says it usually takes at least 6 months) my bowels are doing great.

I will say this…I’m 63 and like to exercise. If I exercise the way I did on keto my glucose goes up past the PM range, sigh, so they are right about exercise. From what I read, they began with a regular Paleo type of diet but they weren’t getting the results they wanted. The PKD has given them the results that they desired. Hang in there my friend. Give your doc friend food from other docs and hopefully he’ll see the light.

He has also expressed that he thinks Paleomedicina are a bunch of quacks.

Paleo Medicina (PM) do advocate the refusal or removal of chemotherapy and/or radiation treatment in cancer patients. That puts the quack target on their lab coats and, by extended implication, risks the positive results of their less life and death consequences work.

It is very interesting to listen to Dr. Clemens report on the hastening of death for brain tumour patients with stage 4 tumours when they have radiation treatment in addition to the PM dietary and lifestyle advice.

Taken alone, one’s skepticism hackles rise when medical practitioners advise against the standard of care. The duck shooters rise from the reeds of prostrate professional bodies to defend their learning. For to challenge their knowledge base challenges their credibility as a professional.

But it is interesting to listen to Thomas Seyfried and his approach to cancer as a metabolic disease in contrast and conjunction with Dr.Clemens’s talks and interviews. It may be dream chasing confirmation bias to listen to them in close succession. Then listen to Dom D’Agostino and his research work on using ketone supplements to enhance the effects of hyperbaric oxygen therapy in cancer treatment. I don’t hear anyone calling Dom a quack.

It is amazingly imaginable to consider a grave prognosis of a glioblastoma brain tumour diagnosis and the black swan case studies of PM in stabilising the tumour growth. That at least gives hope for tumour regression in the optimal environment, increasing surgical options. This stuff would irk general practitioner medicos who have been taught that cancer is a genetic disease, and as such, would colour their whole view of an alternate treatment.

You’ve hit the nail on the head there FrankoBear. I believe in what they are doing so I will stick at it regardless, and I guess we just have to wait and see how their research develops. I hope they can inspire or even conduct some RCTs in the future.

@darcygreenwald Hi Darcy, I hope you are still hanging in there. Any updates?

@ReneeRC No, it’s good. people who fast get blood ketones in the sixes and I’m fairly convinced that what Paleo-medicina is doing is mimicking the markers that we get when we fast.

I have a similar thing going on with my glucose. I sometimes get sub-60. At first it freaked me out, but I looked into it and anything 55 and above is perfectly normal.

After my 45 hour fast last weekend, I got bg reading of 70 and ketones of 4.1. Google said that was dangerous so I ate. Then I felt quite terrible the rest of the day!!

What was allegedly dangerous the blood glucose or the ketone level?

I would have been extremely pleased with either/both…

Lol I have no idea! I just went by google. It said see a doctor at either of those levels and that it could have potentially serious side effects (that I don’t remember off hand, but they made me nervous enough to stop the fast)

That’s a shame as that info is complete bull…

These were the 2 I saw 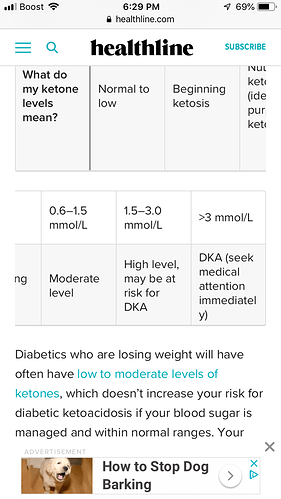 They have to say this to protect themselves from liability suits. It’s the standard paradigm and if someone goes below or above and gets sick from it, they can’t be sued for giving out misleading info.

There are much better keto knowledgeable sites with guidelines that are more realistic. Even on this forum we have folks who report BG as low as 40s with no ill effects. For example, re DKA:

Thank you, I stand corrected. DKA does occur in type 2 diabetes; however, it rarely occurs in the absence of a precipitating event. Case 1 ... A contrast MRI of both the thoracic and lumbar spine was ordered, and the patient was found to have a T10-T12 epidural abscess Figure 1. Case 2 ... An MRI of the left hip was ordered to evaluate for suspected osteomyelitis. Unexpectedly, it revealed left hip myonecrosis and a large loculated prostatic abscess Figure 2. Read the Commentary of t…

I will definitely remember this next time! Thanks guys!