was it firm or floppy?

I use a similar recipe for what I call ‘disks’. I use coconut flour and gelatin or collagen hydrolysate instead of almond flour, and vastly less eggs. It makes a dough, not a batter. Then I either press it flat (even with hands, though it’s thicker, or with a tortilla press, using parchment paper). I bake it on a ceramic nonstick sheet. I mention this because the ceramic sheet makes it rather crispy on the bottom, if put on a rack to cool, and it sounds like something your family might like. Using a tortilla press, I get quite a few disks to bake, so their ECC count is about 1 or <1 each.

They’re pretty firm. I think adding a little Mozzarella in them as I do helps with this. (But I don’t measure, but simply add some. Probably a 1/4 cup or so?) But I also cook them up a little extra too. But they have become one of my favorites especially since it’s so easy. Plus it’s so much different from the normal breakfast foods, and not as greasy, so it works out quite well.

Yeah, I actually made the most recent ones a bit thinner as well, since the Wife was asking if I could. (Though I don’t mind them either way) I also added twice as much Almond Flour last time just to see how it does, and it did make it a little less eggy if one does like the eggy-ness. This and a larger pan allowed it to be larger, but thinner. … But always experimenting on something different, or trying new things. … I also thought about using Coconut Flour, but I know how bad it can suck up moisture, so wasn’t sure if they would dry out too much, plus, I like how I can just pour in the mix and cook. When I do the full Fat-Head Pizza, It’s mostly cheeses, so I have to press them out to shape. But this is just something quick and easy.

Try ground pork rinds to bond it together

You can use - eggs, parm cheese, seasonings of your choice and make a flatbread.

I actually thought of trying minced Chicken, but didn’t think of Pork. But other then Bacon, I’m not much on Pork really. But who knows? Might be good.

You can’t taste the pork. It’s like Panko. they even sell pork panko at amazon,

Thanks, will be looking into it.

Yeah, you gotta use like 1/3 the amount of coconut flour if you go that route, and I usually use either gelatin or collagen hydrolysate with it. I love nut/seed meals, I just get a horrific pain the instant it hits my lower intestine until the instant it dumps out, which I did not have at first, and have no freakin idea why. I ended up sending a small fortune worth of nut & seed meals to an LC friend because I cannot ingest even tiny quantities of them. (More mysterious: I can eat nuts just fine. Surely chewing them makes them meal? Why would this matter??? But it does. Weirdly, my best friend, who is from a celiac family, has the same situation.) Anyway, nothing is as good as almond meal in breadishes. But the coconut meal + protein powder has become a decent sub for me, it won’t make the many things almond meal will like pound cake and pretzels and breadishness, but it’ll make a thin pizza crust at least. I’m going to see if tossing that mix into my chaffle batter improves it because right now the browned-egg-protein my brain gets from it is horrific. It’s so uncool not to love chaffles right now.

@Digital_Dave Your egg-cauliflower salad always looks so delicious - can you post the recipe here for it please?

Thanks, and sure, no problem.

V will keep checking the Cauliflower while it’s boiling, until it gets to about the same consistency of boiled Potatoes - where a fork can be inserted but still have some structure to it. … Then it’s drained completely and then added to the mashed up Boiled Eggs. Then add the Mustard and Mayonnaise until it gets creamy, but not too wet in consistency. … Sometimes we don’t always add a bunch of other stuff beyond this, especially if done last minute, but pretty much anything in Potato-Salad can be added.

Thanks for the recipe. I like onion, celery and dill pickles in my potato salad so may add those.

Yeah, the scallions do go well and adds some nice flavor. V and I were also just speaking about Celery last night. But I also like you’re suggestion of pickles. We already add those to Deviled Eggs sometimes and as you may know… I do sort-of like Pickles.

This is a simple one, but since I’ve been making them here recently, thought to drop it in here…

This is quite filling… 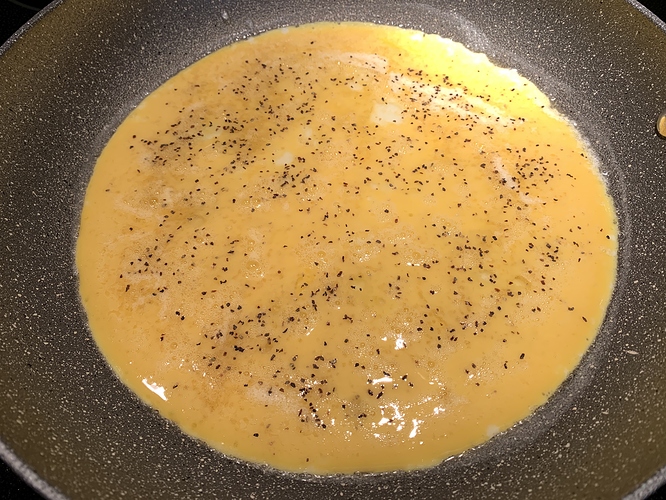 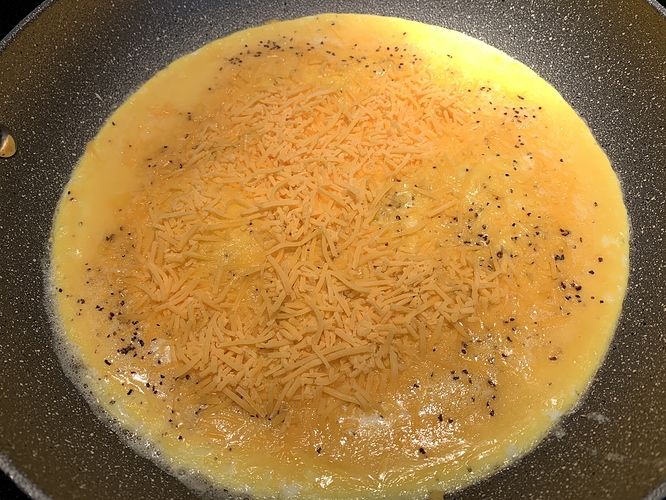 I then add two slices of Ham… 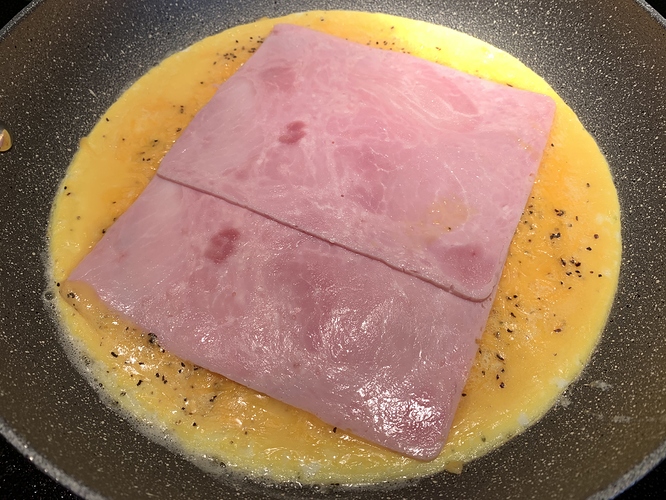 Add another layer of Cheese… 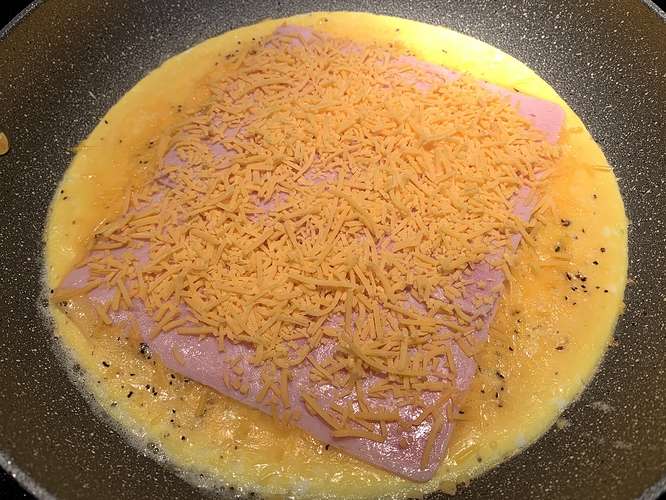 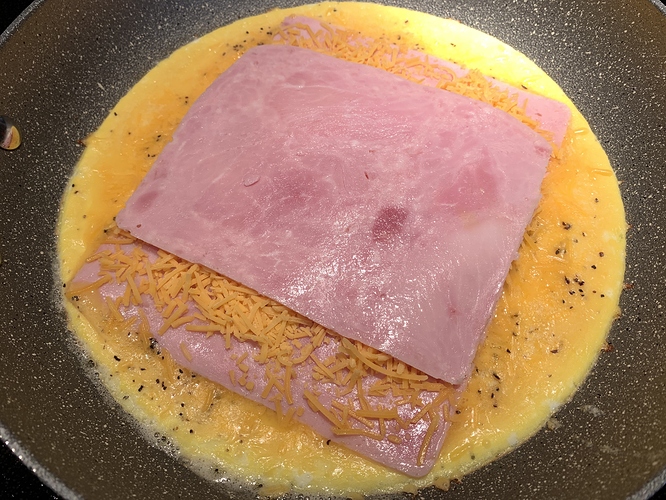 Then some more Cheese… 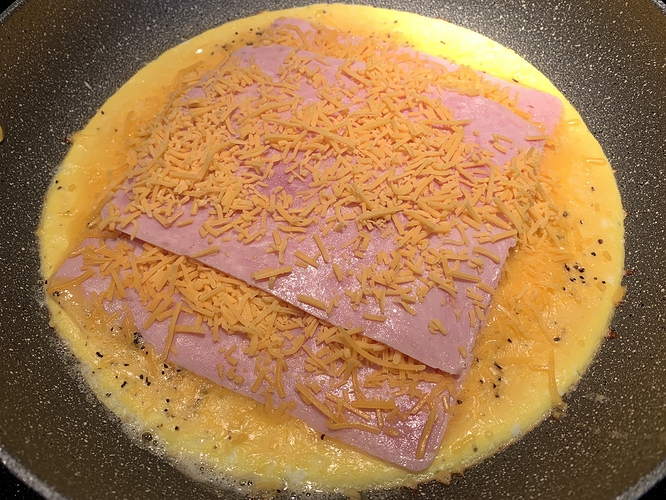 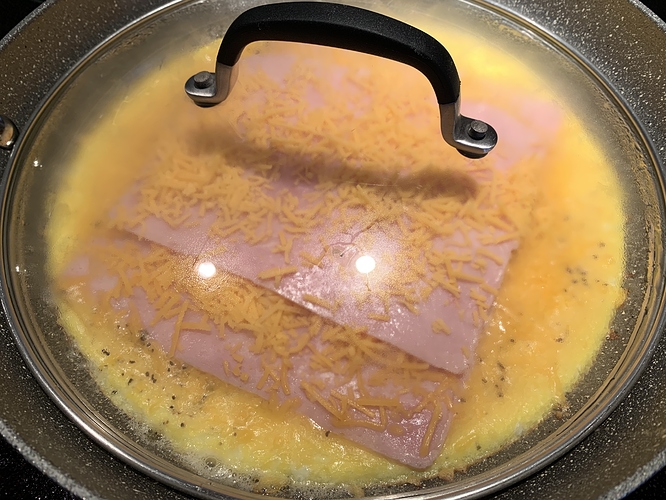 I like adding a layer of Pepperoni to mine… 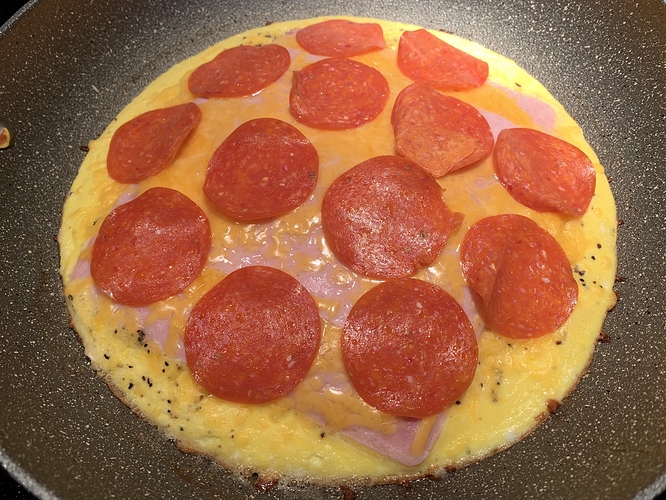 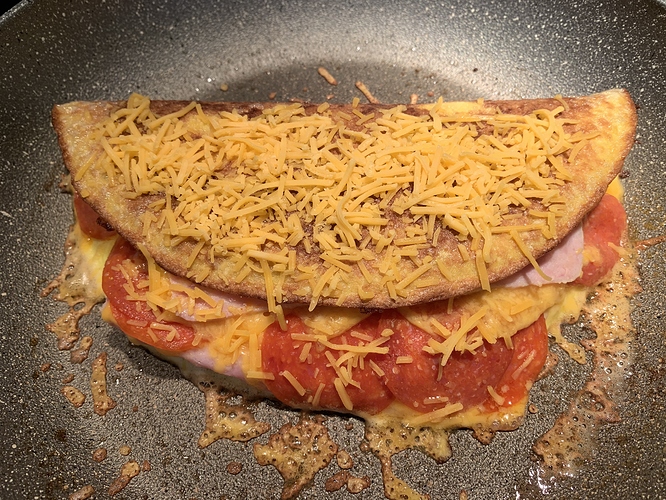 Again, this is very filling but I do usually add some meats to mine. But think by itself it would be fine too. But this is quite large, just doesn’t look it in the pictures… 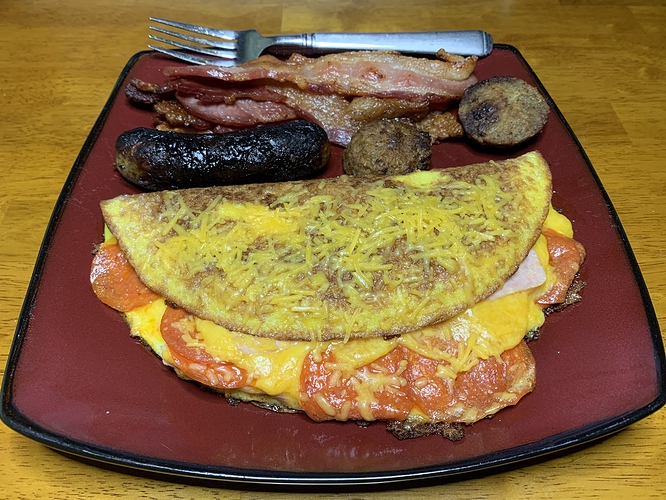 That looks delicious! Now tell me your secret to pouring a perfectly round egg LOL

It’s a pretty good sized pan, so 4 Eggs seems to fit the flat portion or bottom just about perfect.

… I do turn the pan if one side seems to be cooking faster, but it’s not too much.

I make almost the same thing but I don’t flip it. I put the lid on and leave it for about 4 minutes on low to medium heat and it comes out like a crepe.

Yeah, I almost didn’t flip mine either, but then decided it would help the cheese melt and keep it hotter, longer.

But it is definitely filling.

I felt just fine, but just didn’t feel tired and didn’t get but a couple hours of sleep. Maybe between 3 and 5am? So I just took the day off. - So being I’m home today I decided try another attempt at making some Egg Foo Young. (2nd attempt) I think it’s getting there. Tasted fine to me (The Sauce) I just need to get the sauce to thicken up a bit.

For the Sauce, I used…
1-1/2 Cups of Chicken Broth (1/2 Cup for Patty)
1 tbsp. Soy Sauce
1 tbsp. Erythritol (But thinking I may try Liquid Stevia next time?)
1 tbsp. White Wine Vinegar

Needed to thicken the sauce, so I actually tried using a small amount of Psyllium Husk in this version, but when it appeared to start to jelly up on me some, I added more broth not wanting it to get too overall Jellied or become one big mass? (Though it might have just been me, since I haven’t used it much for thickening sauces before, so maybe it just takes more time? - Anyway, I plan to try Almond or Coconut Flour next time, but want to keep the sauce taste the same as it is now, just make it thicker in texture.

Basically for the patties, I used 6 Large Eggs, two cans of Bean Sprouts (which I may go back to one?) 1 pack of Medium Shrimp (41-50 count). Wife ate one, which is great since she never eats EFY! But said it tasted more Bean Sprouts, so cutting them back may help. But it was the Sauce I was working on, mainly trying to get it to thicken to the right texture…

I picked up some La Choy Bean Sprouts, since they didn’t have any fresh, and the other brand I used last time, Ty Ling, actually has more carbs in it. 6 carbs per can, whereas La Choy only has 3.5 per can. 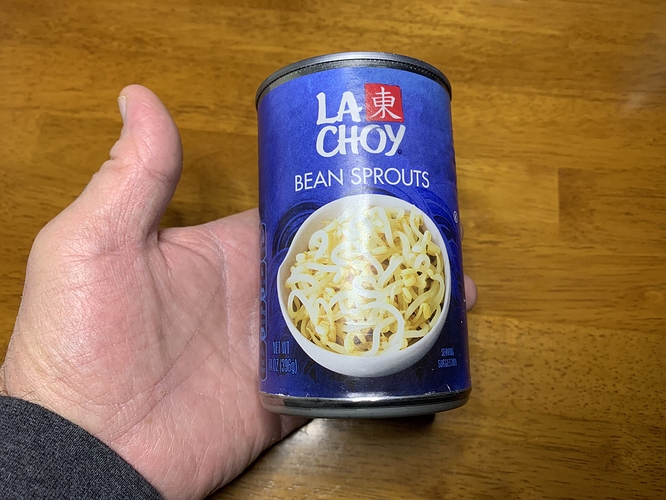 If anyone is interested, here is the ingredient information… 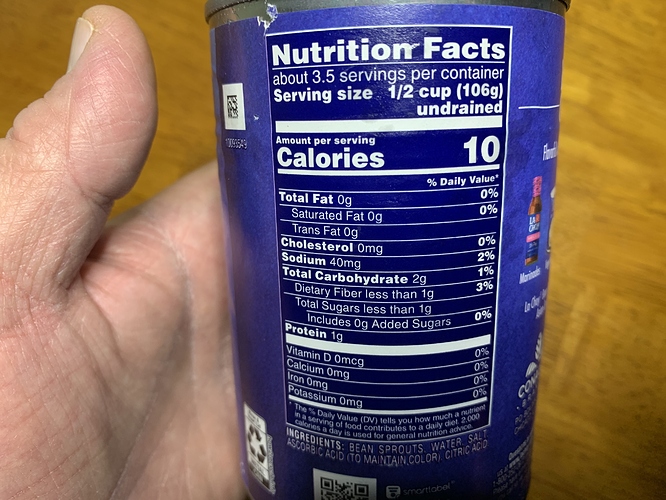 Basically made the Sauce and then mixed up the Eggs, Shrimp and Bean Sprouts. (Actually added two more Eggs, thinking it was too thick, but going to stay with 6 for this, since I think the thicker mix would have worked better. (Not as Eggy, but seemed to be more like Brown Eggs, where I wanted it tighter.) 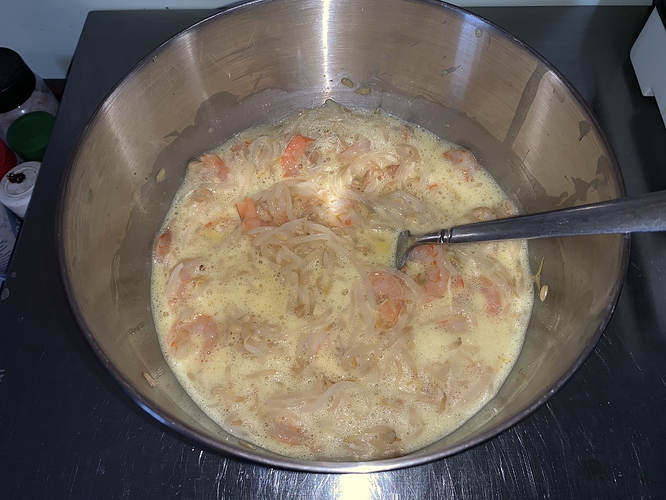 Sauce tasted good (to me) and was only slightly thickened, but I ate three patties and the Wife actually ate one!

She’s never liked EFY! So this is a good sign! 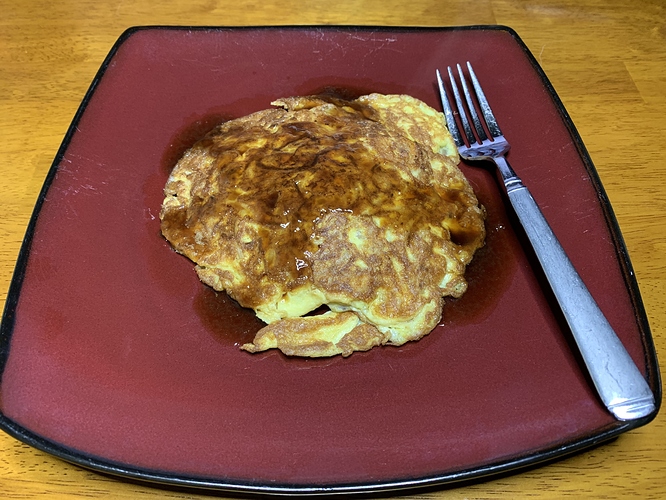 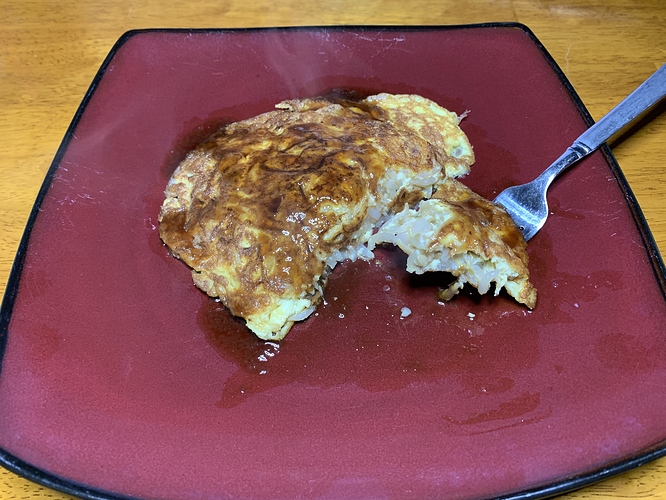