I’m going to try this stuff instead of gelatin on the next attempt. Much more expensive, but maybe it will stay in solution. I’ve used this as a collagen source, but switched to gelatin to save money. If this works, I’ll try removing the Coffee Booster collagen to see what happens.

In preparation for Experiment #8, I started 1 liter of cold brew in my Espro french press. A mix of 20gr of Tim Hortons Dark Roast ground coffee and 15gr of Kauai Vanilla and Macadamia Nut ground coffee in 1 liter of water, with 30gr of orange peel and 1gr of Himalayan pink salt. I’m going to let it brew for 24 hours and use 400gr of this coffee.

The Progressive collagen dissolved much more easily and completely when I mixed it prior to adding to the beer wort. And the wort remained crystal clear after adding it.

The coffee is noticeably darker and stronger, the Tim Dark Roast mainly, not so much vanilla and macadamia. The orange is more upfront as well. I’m drinking the rest of the liter ‘black’ to determine the flavour profile so I can compare to the finished beer.

Here’s the beer prior to initial carbonation and about 1 1/2 hours after mixing. Still 100% transparent and no sign of coagulation/sediment yet. 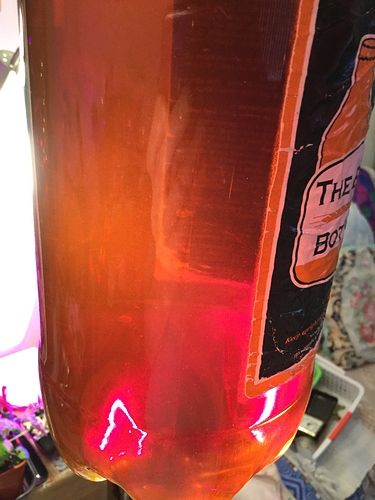 Here we are a bit less than a day and a half into carbonation. Still zero coagulation and sedimentation. The beer is saturating nicely, maintaining a big head well between sessions and progressively losing less pressure between each session. All good news! 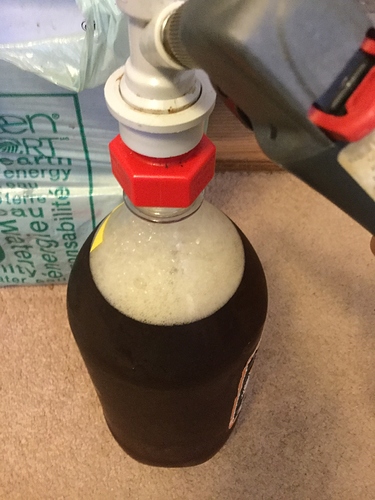 This thread makes me happy! I love a good stout with coffee and chocolate notes

First taste. Same nutty with fruity overtones as #6 & #7 but more nutty and a bit less fruity. The orange is still there but very subtle. No noticeable vanilla. The different coffee proportions is very apparent - slightly bitter from the Tims. Has more ‘coffee’ flavour and even a hint of chocolate. The Macadamia is there but subdued. Next time I’ll increase the Kauai and decrease the Tims a couple grams each. It’s that close! Acidity is good. It is even more of a ‘dark ale’ type than before. The ‘earthy’ aftertaste is back with the slight bitter but fruity is still there; overall a very nice ale. Taste is very close to what I will be satisfied with. It is already much better than I thought it would ever be! Carbonation is excellent, although head retention is still not great. I’ll use a bit more Progressive Collagen next time.

Although the quest for a good head with good retention goes on, the sediment problem is beaten. This is crystal clear and 100% transparent. I can read this on my computer screen through my beer glass. 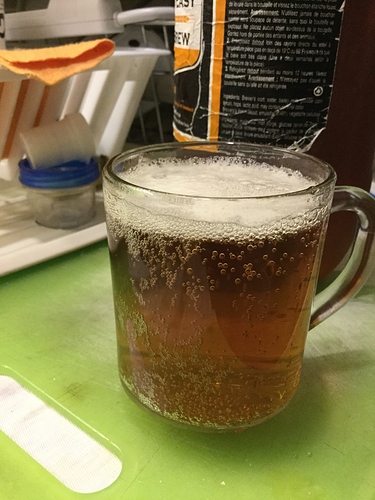 This thread makes me happy! I love a good stout with coffee and chocolate notes

Surprisingly, it’s heading in the direction of a stout. Right now it’s a little closer than I’d like, so I intend to dial back the Tims Dark Roast a little and increase the Kauai Vanilla and Macadamia a little. I hope to reduce the bitter coffee and increase the nutty just a little. There’s actually a hint of chocolate which I’d like to retain.

Mike didn’t you mention getting gum Arabic or Guar gum a while back?

I like ales and lagers, but a nice Guinness is hard to beat. I would probably take it darker, for me. I do not know anything about brewing beer, I have taken several wine classes, but nothing on beer. I want to do some investigating and see if I could make something drinkable here. I am in Kentucky, so bourbon is plentiful, I would play with that but I like the brandy idea as well.

Thank you for sharing your adventure!

I am in Kentucky, so bourbon is plentiful

Drink some Old Fitzgerald for me, it was my favorite years ago. I can’t get it in California but recently discovered Larceny, very nice and smooth from the Fitzgerald distillery. But lots more expensive. Old Fitz was the high quality blue collar Bourbon for me. Where are you, I was in a Louisville and Bullit County. I worked at The Butchertown Pub back then, near the stockyards.

Small world! We’ve been here, in London, for 3 1/2 years. I’m a Dallas girl, then we hung out in Philadelphia for a few years and now here. I haven’t actually tried Old Fitzgerald before, but I will definitely be looking for some to try now!

Mike didn’t you mention getting gum Arabic or Guar gum a while back?

I like ales and lagers, but a nice Guinness is hard to beat. I would probably take it darker, for me. I do not know anything about brewing beer, I have taken several wine classes, but nothing on beer. I want to do some investigating and see if I could make something drinkable here. I am in Kentucky, so bourbon is plentiful, I would play with that but I like the brandy idea as well…

Long ago, 1971 if I remember correctly, I took an organic gardening class at some local high school or college in Winnipeg. A well-known organic ‘farmer/gardener’ was scheduled to teach the class but ended up as a no-show. So a sub was hired and everyone was given the option of refund. I stuck around and it turned out the sub was an enthusiastic home brewer. We struck up a friendship around beer and I learned some stuff from him. That was my first and last semi-formal education in brewing!

I was always fascinated by brewing. My first experience was at the University of Maine at Orono in the mid-60s. Each fall the Ag students sold apple cider. I was informed - by ‘unofficial sources’ - that if one left the gallon jug of cider on the dorm window sill after a week or 10 days it would magically transform into ‘hard cider’. It was true, it did! Much to the joy of the many students who purchased multiple jugs of the stuff.

From cider I advanced to mead, recipes mined from ancient English cook books. “Spread the yeast on a slice of whole wheat toast…” Then eventually to beer. From beer to braggot, the ‘happy marriage of malt and honey’.

I first made wine while homesteading at Lake Laberge in the Yukon. A friend introduced me to rhubarb wine made from red rhubarb. That was quite good so I decided to try it. I couldn’t get red rhubarb seeds for some reason so ended up with green rhubarb. But it was just as good and made a wine that I think rivaled anything anywhere I had ever imbibed! Dark amber colour, almost syrupy in mouth feel. Truly the ambrosia of the gods. Rhubarb is a perennial shrub, so once I established a goodly sized patch, I had the ingredients for 10 gallons of wine every summer.

Years later here in North Vancouver I made wine at a local wine-making shop. It was good, not great and certainly not comparable to my rhubarb wine of Laberge. A nice, Italian red very similar to Cianti. Very dry.

By then, however, I was brewing braggot at home. My braggot was real joy! I experimented with different honeys and different malt extracts and eventually settled upon my go-to brew for daily consumption. You can’t buy it because nobody ever thought of it before I did. I thought it the most delicious ‘beer’ imaginable. Far better than anything I could buy in the liquor store. And I am very experienced purchasing there!

Anyway, here I am trying to make a decent zero carb beer/ale. I think I’m very close to something very good. Far and away beyond the ‘low carb’ beers out there.

Yes! I think bourbon would make an excellent base. You might try various brands. If you want something very ‘Guinness-like’ I think coffee is an excellent place to start. I’m aiming for a dark, nutty type ale, not stout. But the difference is not much. Coffee and coffee blend selection is where you’ll find what you want.

If my husband and I are ever up that way, I may bug you to try said braggot! I adore Meade - and for that matter, lots of ancient English cookbooks (was in the SCA for a period of time). I look forward to continuing to read your progress. Thank you so much for the great information and insight into your journey, this made my morning.

@cansel Sadly, I haven’t made braggot since before starting keto. Way too many carbs! I’ve got 8 liters on hand from the last batch I made, from several years ago which I am tempted to try sometime. But unless honey bestows some sort of magic (and anti-sepsis), I don’t expect it to taste very good. It’s been sitting on the lees the whole time.

In preparation for Experiment #9, I started 1 liter of cold brew in my Espro french press. A mix of 15gr of Tim Hortons Dark Roast ground coffee and 20gr of Kauai Vanilla and Macadamia Nut ground coffee in 1 liter of water, with 25gr of red grapefruit peel and 1gr of Himalayan pink salt. I’m going to let it brew for 24 hours and use 400gr of this coffee.

I decided to try grapefruit peel this time because I like grapefruit flavour and I think it will contribute more to the final brew than orange peel. It has a stronger flavour and is more acidic. I’m hoping that a little less Tims and a little more Kauai will boost the nutty flavour without sacrificing head formation, which I think is due in large part to the Tims Dark Roast.

The coffee actually brewed for a bit over 25 hours, so it’s a little stronger than previous batches and slightly more bitter. The grapefruit peel added sort of a ‘generic citrus flavour/aroma’, not specifically grapefruit. I added half a gram more Coffee Booster by accident, not intention. I don’t expect it will matter much. Again, the Progressive Collagen dissolved completely. The wort is transparent and free of sediment. I added a bit more in the hopes it will firm up the head and retention. 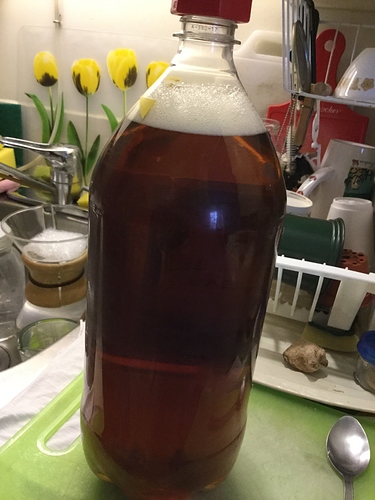 First taste. Same nutty with fruity overtones as #6, #7 and #8 but a bit more nutty and about the same fruity. I think the same coffee mix, but 350 grams will suffice. There is no bitter. The grapefruit seems to enhance the ‘fruitiness’ but without adding any specific grapefruit flavour (or any other citrus flavour) just a sort of generic ‘fruitiness’. Carbonation is good, even the first glassful, retention is not bad but not yet great, but it’s very close to acceptable. So a little more Progessive collagen should do it nicely. Overall, this is a pretty good dark ale. A little ‘too earthy’ which I think a little less coffee will remedy. 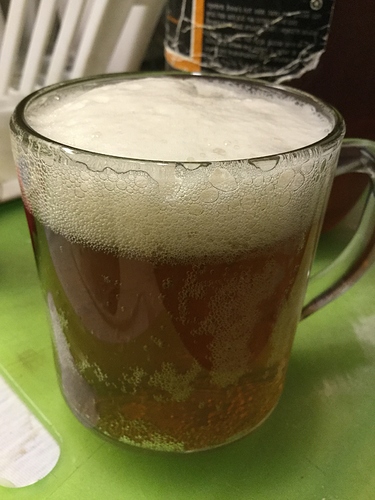 PS: I must mention that the mouthfeel is really great! A ‘barley sandwich’ as much as any commercial beer/ale and more than most.