To document what I’m dealing with here. These two photos show the sediment in #5 that I hope will go away in #6. Once I resolve the precipitation/sediment problem, I think I’ll have a pretty good ‘beer’. 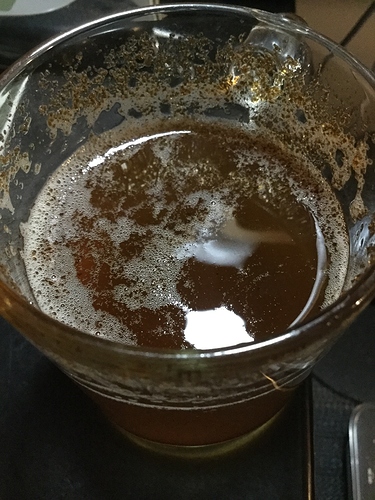 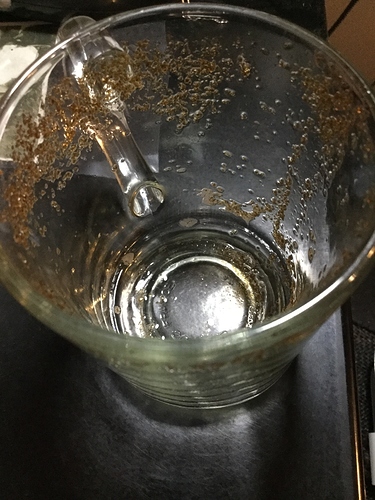 Would a slight reduction of the gelatin reduce the precipitation? Or maybe just filter it.

In #3 there was no noticeable precipitation/sediment. The ‘beer’ was slightly cloudy, but nothing precipitated out. I used 1 gr of gelatin in #3. The only difference between #3 and subsequent tests is the orange peel. What I failed to appreciate in #3 was the acid added by the orange peel. When I evaluated the results, I was thinking of taste not the chemical reaction of the acid/gelatin. So I missed the potential affect of the acid on the suspension.

The best thing about this so far is that the beer tastes really good! So it’s not like I’m drinking disgusting mistakes.

Try a batch without the citrus maybe?

Both #4 and #5 were without orange peel and both had major precipitation and sediment. Thus my tentative conclusion that lack of it caused the problem. I’ll find out in #6, which I’ll be mixing later today after the coffee has finished brewing. If precipitation occurs it will do so immediately after adding the gelatin.

The coffee and orange peel brew worked well. Crystal clear and noticeably orange flavoured. The colour was slightly paler than last time (#5) and slightly orange tinted. I poured myself a small sample from what was leftover after adding to the beer mix. 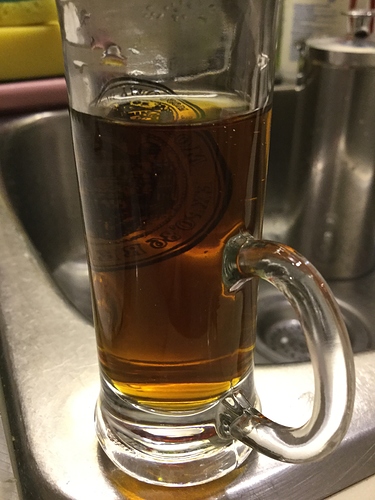 The real test came with the addition of the gelatin to the beer mix. @David_Stilley David, I didn’t think pouring the gelatin through a filter would work since it looks like the gelatin forms an emulsion and I thought pouring through a filter might remove too much of it. However, instead I mixed the full gram in my small 100ml beaker and let it sit for a few minutes which allowed the undissolved gelatin to settle out. I then poured the clear liquid into the beer mix. I did this 7-8 times, diluting the remaining gelatin a bit more with each repetition. I’ll soon see if this worked. The photo shows the gelatin solution on the third mix. Lots of foam at the top and much gelatin still remains on the bottom. There was still gelatin left in the beaker by the time I filled the PET bottle slightly above the fill line, but I think I got most of into the beer. 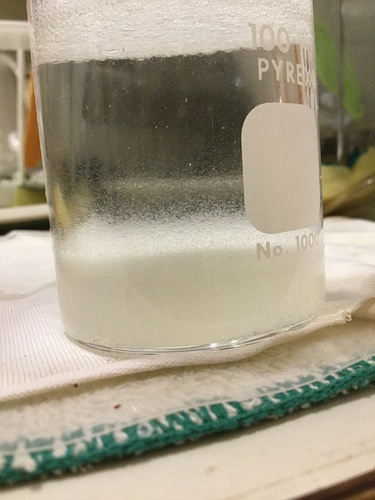 After initial addition of the gelatin, the beer is a bit cloudy. I still see through the bottle, but it’s no longer crystal clear. I expected this and am pleasantly surprised the beer remains as clear as it is. I’ve carbonated it and will let it rest for a couple of hours, then make a photo to document what it looks like.

A couple minutes after the second carbonation session: 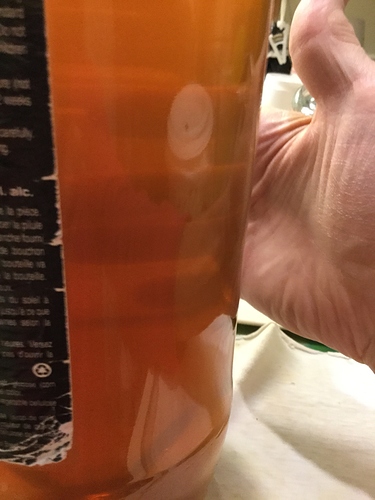 First taste. Nutty and fruity overtones, the orange is there, a hint of bitter (from orange peel pith, I suspect) slightly more acidic than previous samples. Very much a ‘nut brown ale’ type. A little too much ‘earthy’ aftertaste. I think less coffee will remove that. Overall, this is very close to being a very nice ale. There is a little sediment, very little so not enough to be a concern; it’s on the order of sediment you might expect in any dark beer/ale. I agitated the bottle gently before pouring. Although the beer is a little cloudy in the bottle, in the glass it’s clear.

Head and retention are weak. So it looks like I’ve reduced the sediment at the expense of the head. It’s very possible that with more empty space in the bottle, subsequent carbonation will build a better head. Although the head itself is a disappointing, the beer is nicely carbonated. But it may well turn out that using gelatin is not the best option. I odered some gum arabic online which I’m still awaiting arrival. I’m going to try that since gum arabic was one of the original ‘head enhancers’ used by brewers.

Next test, I’m going to use a little less coffee and employ a peeler instead of a knife to get the peel off the orange with as little pith as possible. 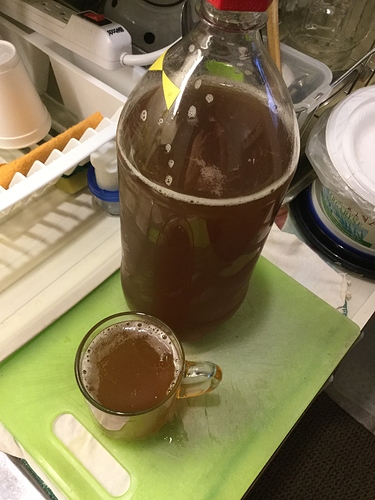 Chef Stylee tip: You can also take a piece of peel and lay it skin down on a cutting board and shave all the pith off with a sharp paring knife. It’s fast and easy. I wish I could be sampling with you Mike.

Thank, you, David! I wish someone was here to help enjoy these experiments. Well, my wife is here and sharing some of it. 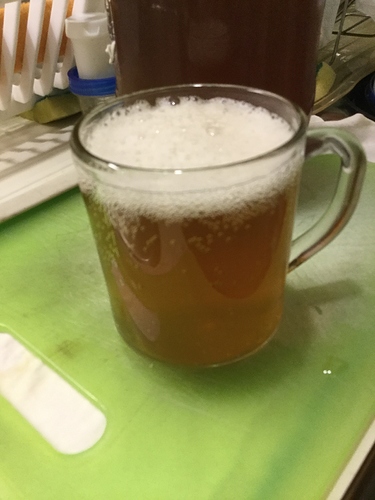 Nice, Michael. Does your wife eat Ketogenically as well??

Awww, maybe you can get her to switch over one day. I am always hopeful that I can get my hubby to do Keto one day, but for sure, he won’t in the near future, haha.

It’s great you have someone Mike, I always just assumed you were a bachelor kind of guy since you never mentioned her.

In preparation for Experiment #7, I started 1 liter of cold brew in my Espro french press. A mix of 11gr of Tim Hortons Dark Roast ground coffee and 22gr of Kauai Vanilla and Macadamia Nut ground coffee in 1 liter of water, with 22gr of orange peel and 10gr of Madagascar Bourbon. I’m going to let it brew for 24 hours and use 400gr of this coffee.

I thought that maybe the Tim Hortons Dark Roast contributed to the good head and retention in #3 so decided to add it. I also increased the total coffee amount to 33gr, both to use more total coffee and to get almost the same amount of Kauai to get as much flavour as possible out it because I like it’s taste better than the Tims.

I bought a peeler and left almost all of the orange pith behind. I think that will eliminate that source of bitterness. I’ve added vanilla extract again to try to entice more of that out of the coffee to balance the nuttiness.

Pouring the coffee into the graduated beaker (and the PET bottle) produced a nice head. I think that’s the Tim Hortons Dark Roast. Good sign! After adding the coffee/brandy mix, a few hundred ml water and the Coffee Booster the wort remains crystal clear.

I mixed the gelatin in warm water and it dissolved completely. Maybe that will help prevent coagulation and sedimentation. Adding it to the wort made it cloudy. I expected it would.

I carbonated prior to filling the PET bottle completely. With the additional head space I hope to get more CO2 dissolved into the beer. After it chills overnight I’ll add the rest of the water to the fill line and continue to carbonate. The next time I will use plain club soda water to see how that affects overall carbonation. 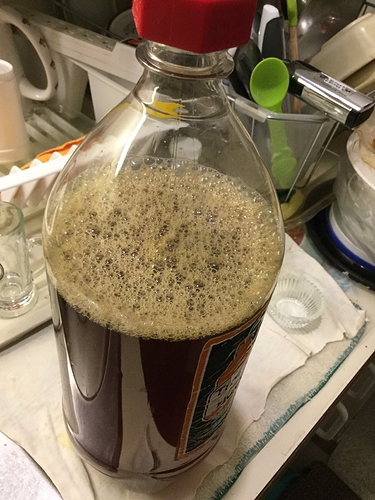 Unfortunately, still lots of coagulation and sedimentation. For the next test, I’m going to omit the gelatin to see what kind of head I get just with the coffee. 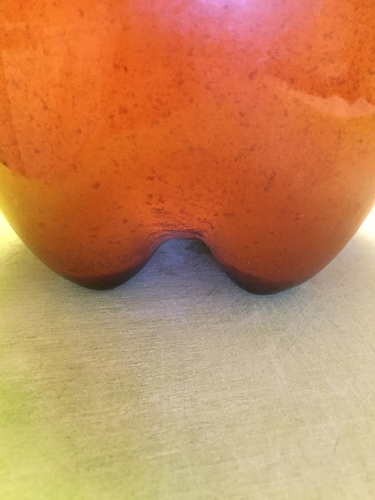 First taste. Same nutty with fruity overtones as #6 but less nutty and a bit more fruity. The orange and vanilla are there but very subtle. About the same acidity as #6 or maybe a bit less. Very much now a ‘dark ale’ type. The aftertaste is no longer ‘earthy’ but fruity; overall a very nice ale. Sediment remains a problem, but taste-wise I think this is about right. Might try different coffees and blends to vary the taste a bit. But overall I’m satisfied. Carbonation is excellent, although head retention is not great. I expect it will be better with subsequent samples as the beer saturates more completely over the next couple of days.

Now my testing will concentrate on producing a good head with good retention - and no sediment. So onwards!