May the Meat Force be with you! - 31 day Zero Carb Carnivore Cruise

Crikey Karen, what an adventure - I was tired just reading it!

I have friends who eat raw chicken but that’s not something I would do. I also don’t like raw, or even rare lamb. I only eat beef raw. Maybe some day I’ll get there with lamb. I never even ate lamb at all in my life until 2 years ago!

@JJFiddle I’m familiar with his teachings. There are some die hard followers of him in the carnivore space

This morning hubby went to the dentist for a 9-tooth bridge - finally the end of the procedure that started years ago. He kept the temp bridge in for maybe 5 years and only finished the work this last 2 months we’ve been on the E coast.
So while he was out for that appointment I had 4 thin slices of cold tenderloin (cooked sous vide Saturday). When he recovered from the novacaine, we split a half dozen scrambled eggs. During teaching, I had a slice of cheese and a slice of deli turkey during a break. Then tonight, half a ribeye left from lastnight. Mmm that ribeye really hit the spot!
Tomorrow morning we’re going to breakfast. I like breakfast if we have to meet people because it’s easy to just get eggs, bacon and sausage and not eat sides.
Then I teach a fairly long afternoon/evening, mostly online, and another day bites the dust! I can’t really believe we’ll be ready to go by Friday. 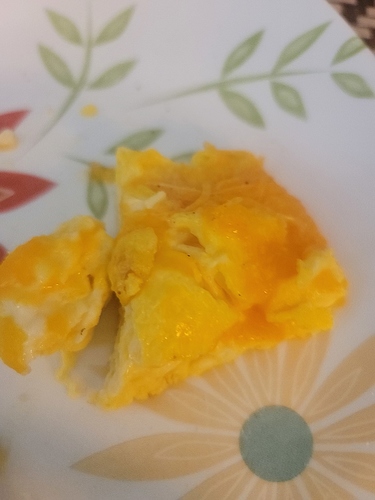 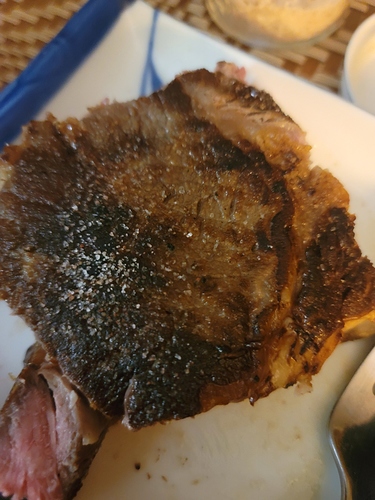 @Fangs thinking of you with your sciatica… Man that sucks! In TX it’s all but gone for me but here in VA, yikes, it’s every day! Hope yours goes away soon and life gets back to normal. Maybe the pool will help.

(I ate quite a bit of each of these before I remembered to shoot them.)

thanks JJ, I do believe the pool helps but it sure raises my spirits too, water baby I am! sorry you have to deal with the darn sciatica junk too,.ugh

hey what does this last line mean? I am thinking, hmm, shoot them and darn if I can’t put it into context? help an ol’ broad out please HA

Lol she meant take a picture

Yes. Shoot a pic. I thought of that too though. Bad food should be shot

but it wasn’t, it was good food! Which was why I forgot to shoot them

Oh no, I barely tried anything yet!

I am unwilling to try most things or willing but just unable to. And there are so many things to experiment with!

You are nice but feel free to ignore me, I don’t really need help

I doubt people can help me anyway, it’s up to me. I don’t mind, lack of fat-loss is one of my tiniest problems. I am moderately pleased with what I have. Of course I fail too much but I just need to try longer, harder or something. I will change.

I will try to read back later, guys, I am alive and will write about things but we visited the zoo (it was super tiring and too much stimuli and too many things to see, the capital city zoo is too much for one day) and administration problems and shopping and city and lawyer and we are total busy and I don’t feel I can afford being much on internet (I am but if I can avoid this forum, that is a big help).

I ate all my pork (except some smoked pork chuck, it was soooo nice) but bought more and tomorrow I will buy even more meat and fill my freezer again.
I still eat less eggs than normal and like meat more than normal. Wow. Still the opposite of boredom if it’s about meat. But I had off times so maybe it doesn’t count. My off days are definitely changes. In the past I used it to go low-meat, to give myself a little break (I did that on carnivore anyway)… Now I still depend on meat and eggs, it’s just inevitable. I ate more cheese again but now I stop but I bought sour cream and greek yogurt and I soooo missed these things… I won’t try no dairy in the near future… But my dry sausage consumption plummeted. No need for it when I just can’t get bored of my meat (or if I want something else, it’s always quark). I had normal sausage when my meat was very lean though. And bacon but that was some days ago.

Tomorrow is city day but I already have pork and turkey roast to eat when we come home.

And some of my pansies just died or are dying. We cared for them but they just wilted. One is as pretty as it was though.
We have irises now! And other flowers. And it seems it’s elderberry flowering season again. There are everywhere here. Just like locusts (why is a tree called like that?). We have an elderberry tree. Elderberry isn’t a tree but ours apparently is

@Fangs ouch sciatica isn’t so good … my step dad (1st one lol) had that and back in the day the doctor ordered him to lie on a board on the floor and stay there!!

of course we know better these days that movement is the key … not so great having to keep stepping over him, just wish I had thought to misjudge those stepovers at least once or twice

@JJFiddle your brekkie looked goooood. I have just had a bit of bacon, yours looks nice and crispy

I had another crappy nights sleep but at least I know the deprived sleep isn’t down to cheese cos it didn’t really change much during the cheese abstinence.
Alarm was set for 5am but I was awake and out of bed at 4.38am and no point going back to bed for 20 mins, thats when you crash and it feels like you’ve had your eyes shut for 2 secs.

So I arrived in the prison car park at 5.50am and I didn’t see my car again until 6.45pm, just worked straight through from 6am 🥱🥱

Brunch at midday was sliced cooked chicken reheated in butter, followed about 2 hours later with a hard boiled egg and then at 4.40 had tinned tuna with mayo and then about 6.15pm had another hard boiled egg.

Arrived home and had 3 small chunks of cheddar and some bacon. A bit of little and often today just to keep me going through a very long laborious day of listening to boring men on the phones, most of whom find it incredibly difficult stringing a sentence together or speaking the Queens English!

Had a couple of bad coughing episodes and is breathless again just talking on the phone. Not sure what can be done for him… Saturday and he was like a new man!

Just noticed the fitbit sleep said I got up at 8.34am … lol that was the night before🙄 this was last night

My eating has not been in control the last couple days. I allowed sausages in and it just threw me out of balance. I didn’t eat any non carnivore foods, but I haven’t been eating optimally for me. Got myself back on track today with wagyu burgers, bacon, suet and butter. 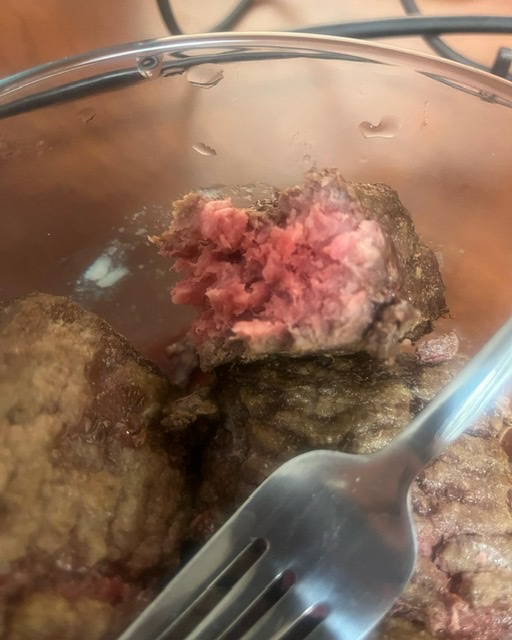 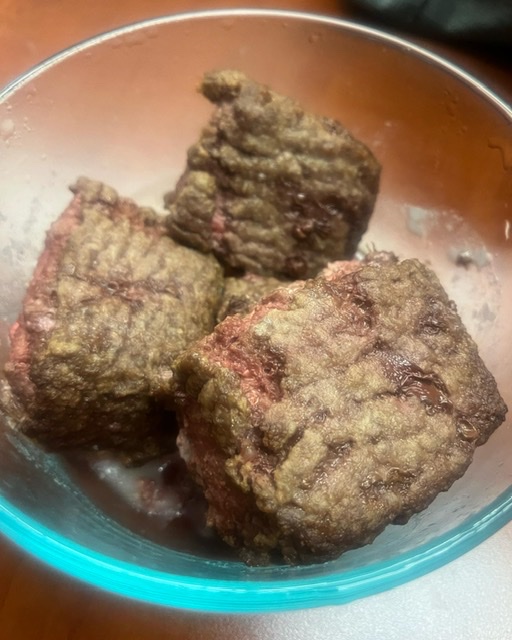 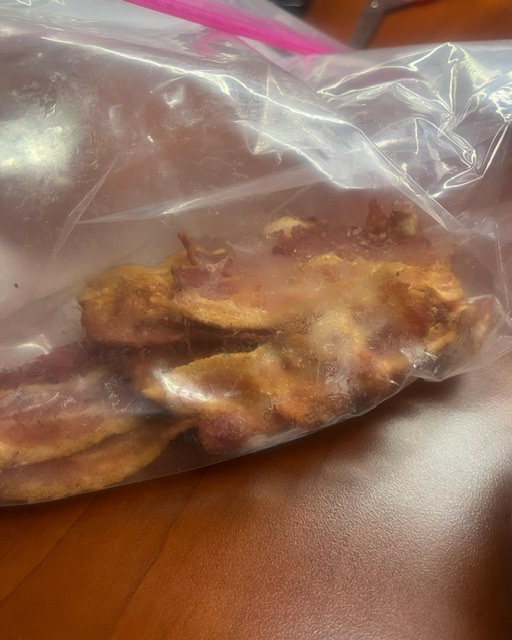 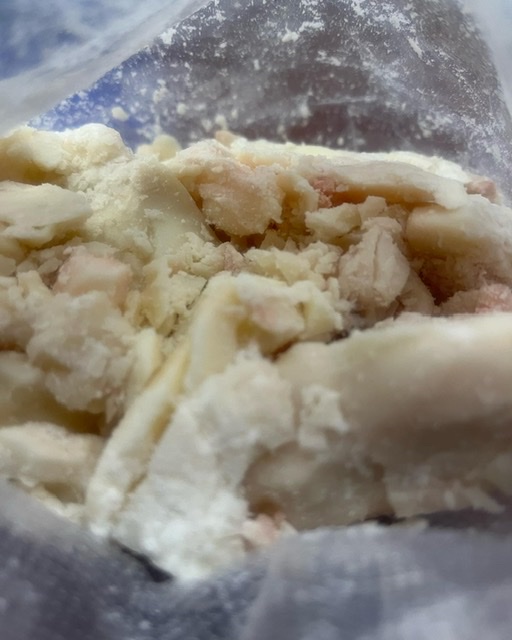 Here’s some pictures from the last couple days 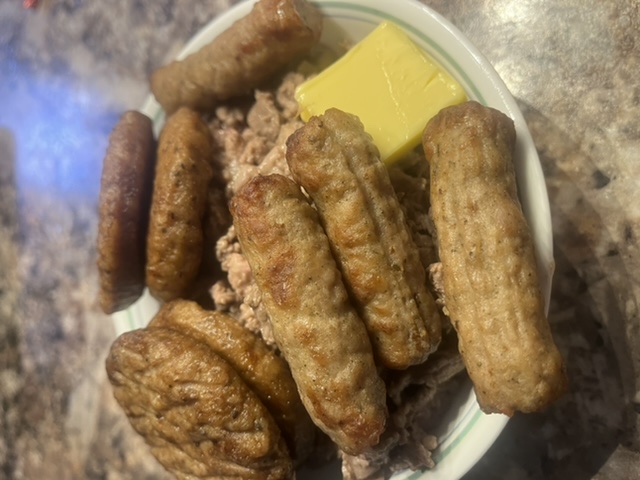 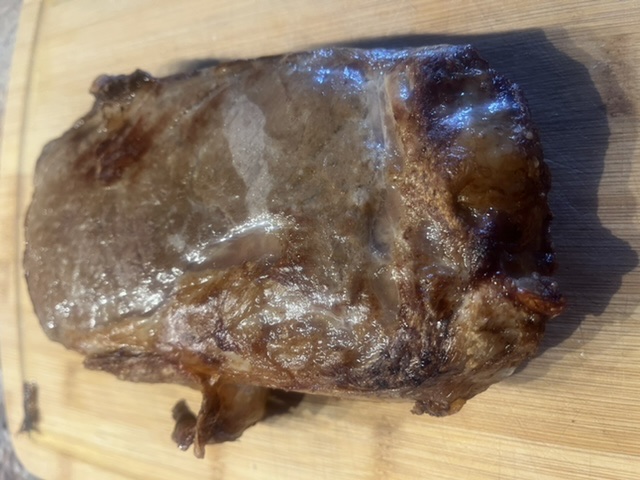 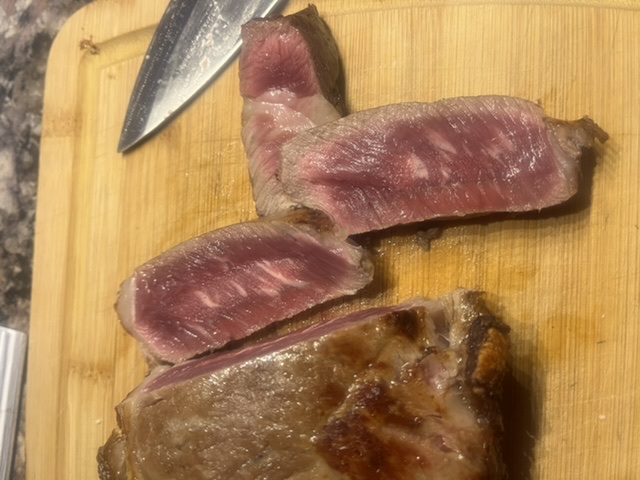 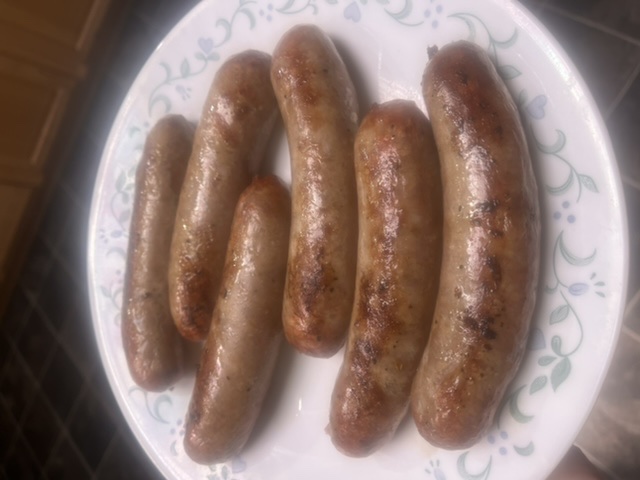 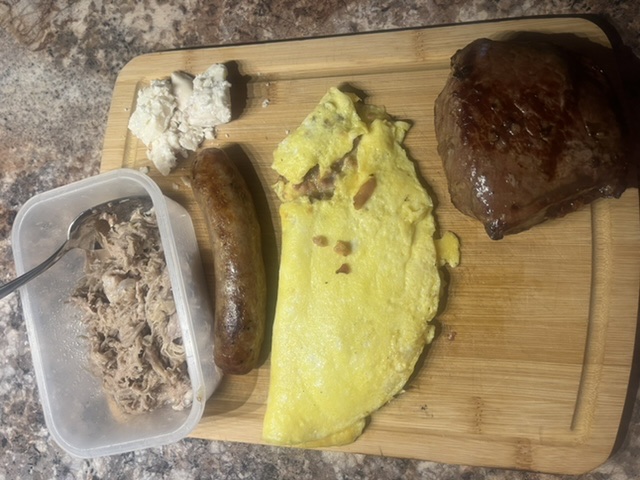 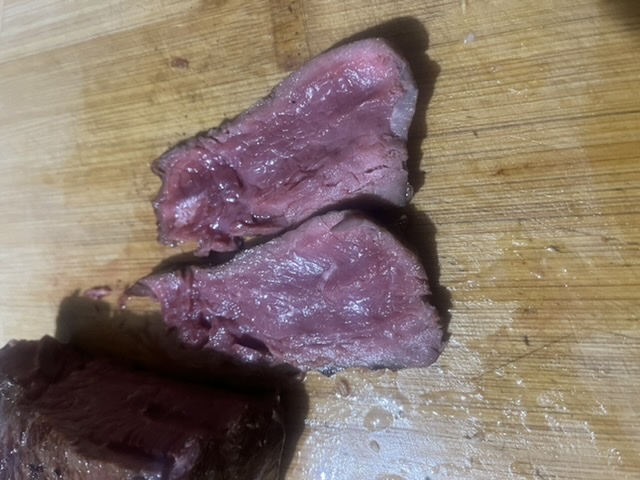 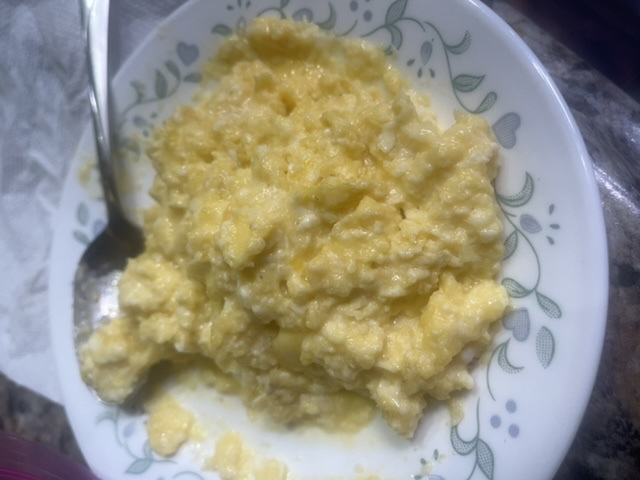 Stept on the scale this morning.
At 82,4kg still the same. Its very stable.

Yesterdag did a 20km walk. The route was set out by a lokal walking club and it was very nice.

I was invited to a family party at my cousins place. I’m not going this time. Last time they kept on pushing me to eat their plants and criticised me in a bad way for my food choices.

Planning to organise a BBQ and invite a bunsh of friend instead, who dont care what I eat and love me just the way I am.

You are nice but feel free to ignore me, I don’t really need help

I will stop worrying.

Sorry about the sleep, Karen, but I think you’re very wise - those 20 minutes always seem to drag you into the deepest sleep, and then you feel terrible.

Glad you found what was knocking you out of alignment, Daisy. I don’t eat sausages very often, but I’ve started splitting the packs and freezing them in 1s and 2s, so when I defrost them, it’s just for a taste and not the basis of a whole meal. Like you, I find that if I eat more than a couple, I feel sub-optimal.

And I think you’ve got a great plan, Vic. Life’s too short to listen to people criticising your food choices - you’re healthy and thriving, and that’s what matters. Enjoy the BBQ and time with your supportive friends.

Ohhhh yea, ok DUH on me

I had all kind of crazy thoughts on wondering what that meant!

I was invited to a family party at my cousins place. I’m not going this time. Last time they kept on pushing me to eat their plants and criticised me in a bad way for my food choices.

Planning to organise a BBQ and invite a bunsh of friend instead, who dont care what I eat and love me just the way I am.

AMEN Vic. Do you and what you need and drop the negativity and surround yourself by all the fun and good! Cool!

Isn’t it great to stumble and not miss a beat cuz you know what to do and can just move on?

Big thunderstorm last night. Storm chasers were at the beach and got this evening shot: 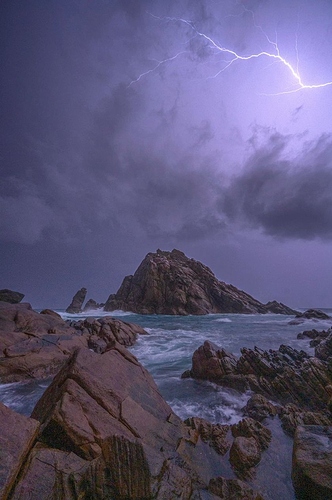 I made the needed amendments: 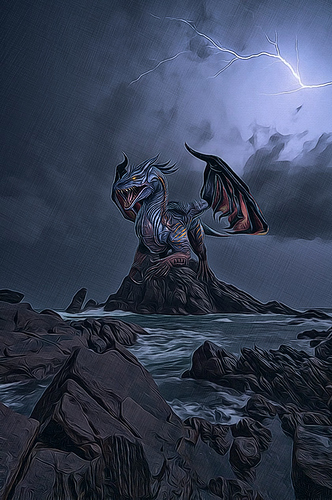 Well, that did it… I’m moving there immediately!

As if the white sharks weren’t bad enough.

Further problems with the place: There are some wineries over the ridge that have planted feral trees. Droppin’ all their dang leaves.

(But the deer, cattle, sheep, chickens, kangaroos, and rabbits are all free-range and pasture fed.) 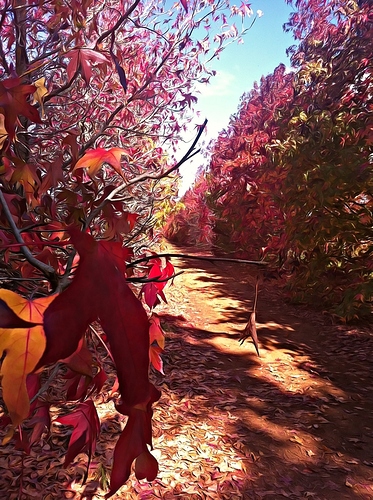 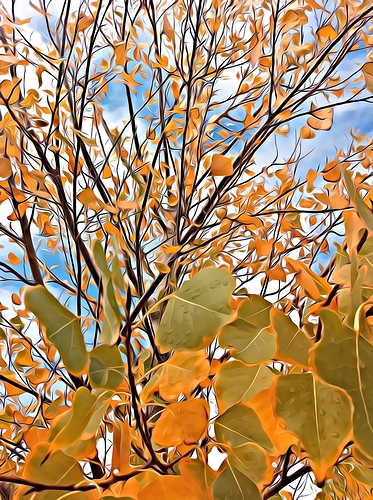 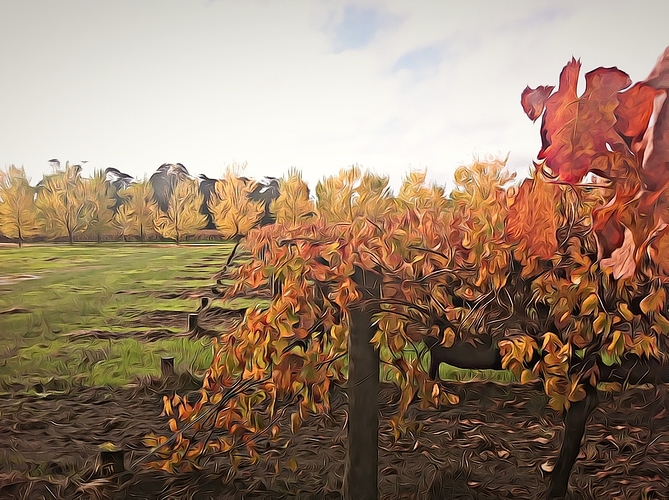 Man oh man… White sharks too? Where’s my suitcase? Do they frown on people living on the shore in little shacks?