This is my buddy Mojo, usually just called Moe, in one of his favorite places. On top of nice dark clothes so his white fur stands out on whatever I’m wearing. 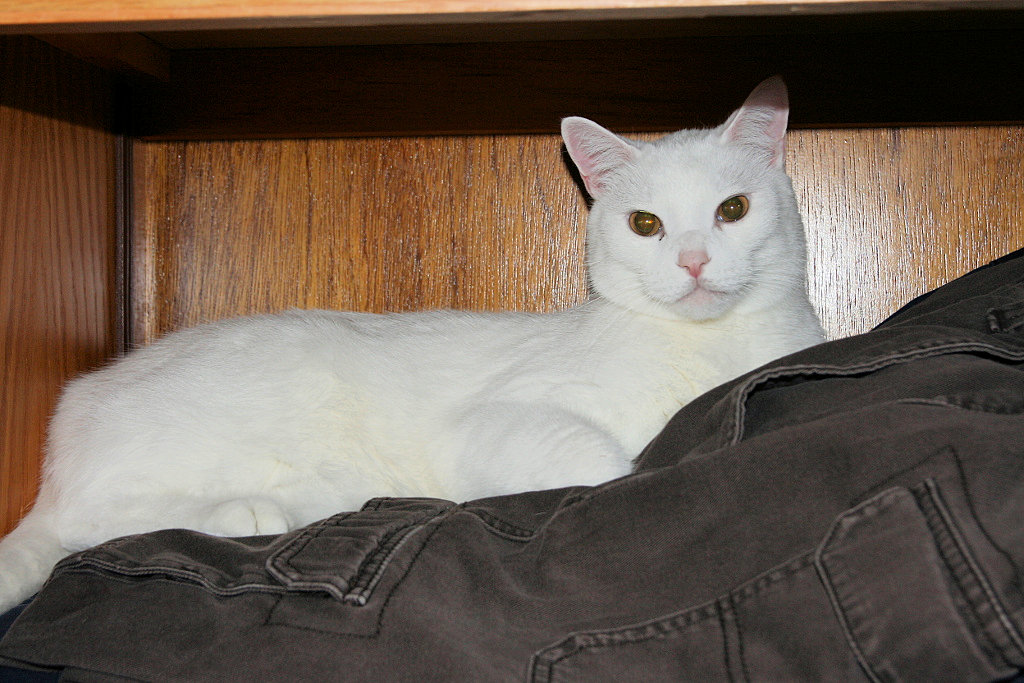 Moe suffers from an excess of personality and would prefer we lie around and snuggle with him all day. He also endures allergies with runny eyes (just like me) which leads to being a mouth breather at times (again, just like me) so I really empathize with him. His metabolism is miles better than mine, though. He’s the only cat we’ve ever had who routinely has the veterinarian gushing over him.

This is Aurora, usually just called 'Rora or Punkin. 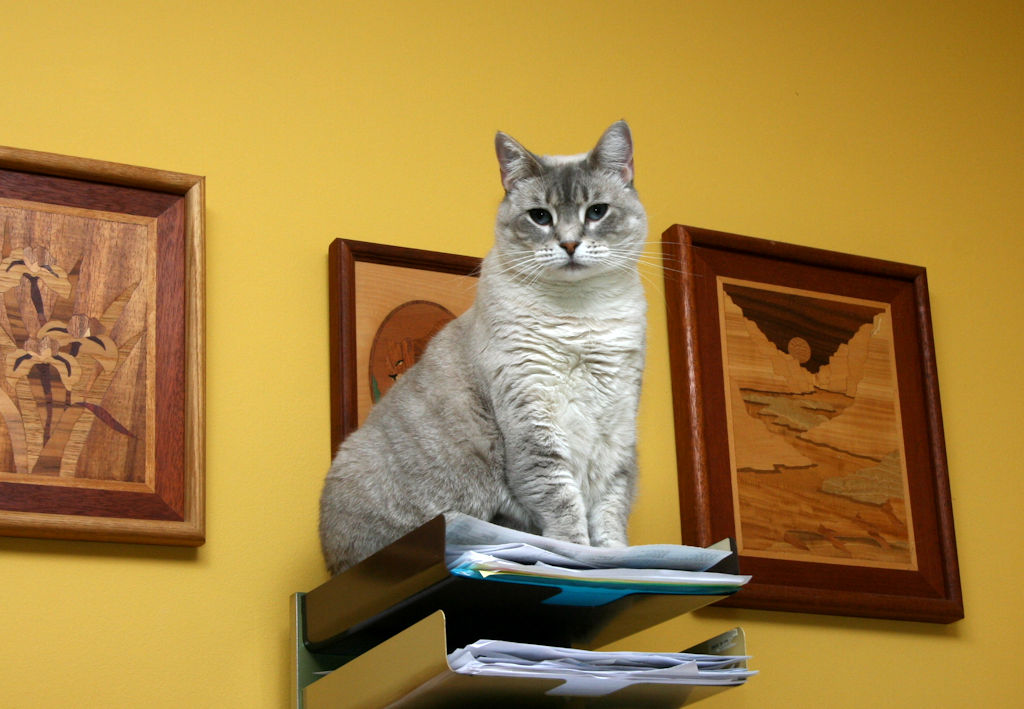 While Moe’s a long, lean cat who can put his hands on the kitchen counters without working hard, she’s more rounded. The vet always marvels how good her blood work is. Including blood sugar. She’s a carboholic, though, and will only eat dry food. We try for the lowest carb stuff we can get, but it’s always a struggle.

Both are rescue cats who have been living with us just over 9 years. IIRC, they’re both 12.

Here is my Lily! 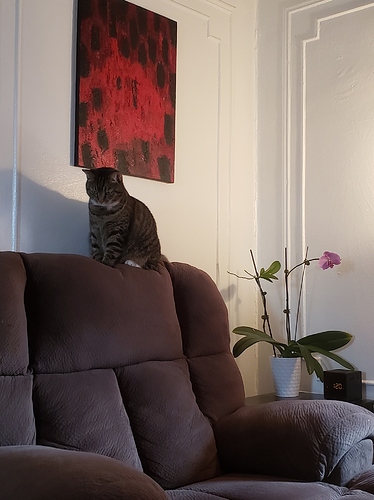 Aha… there IS a cat thread xD Been super quiet though. Granted, I am the epitome of ‘crazy cat lady’.

Most I ever had at one time was 12. Some of those were temporary fosters that became permanent additions ; )

Just the two right now after most of my original brood died off due to old age. 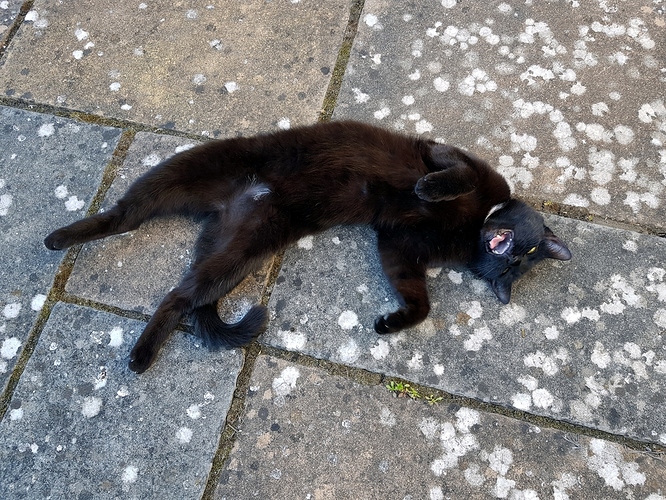 And her ‘brother’ Mikey: 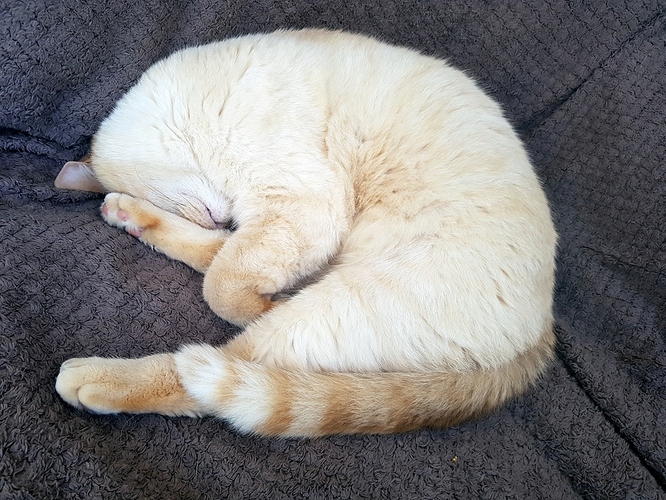 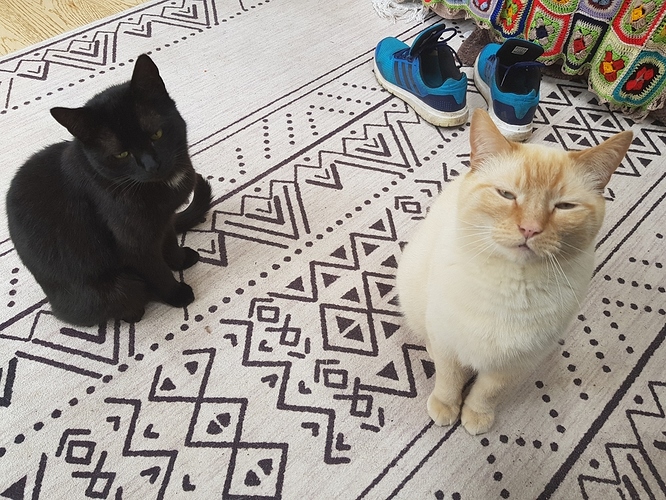 Glad you revived this thread. They’re both gorgeous. But that Mikey looks like a lover, for sure.

Mikey is a giant doofus and a proper softy : )

Bernie is more of a ‘cat’ cat most of the time, but when she does decide she wants snuggles, she goes all in!

They’re beautiful. I love cats. Sadly lost a 17 year old last month who was the last of a litter. I’m going to look at a rescue next year

It’s never not tough to lose them : ( Can’t imagine my life without at least 1 cat in it though, and honestly, the more the merrier ; ) 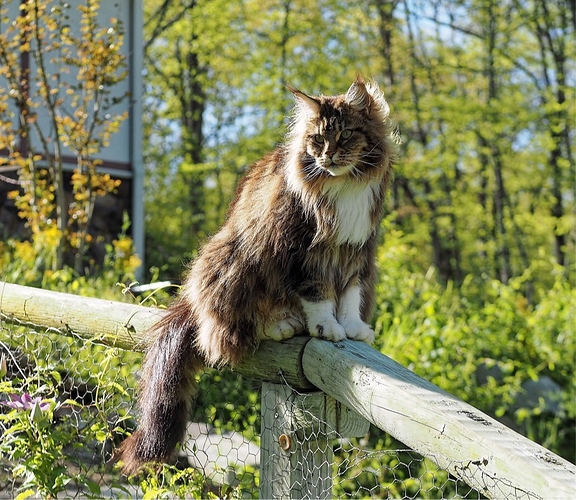 Maine Coon or Norwegian Forest? I still have a hard time differentiating xD 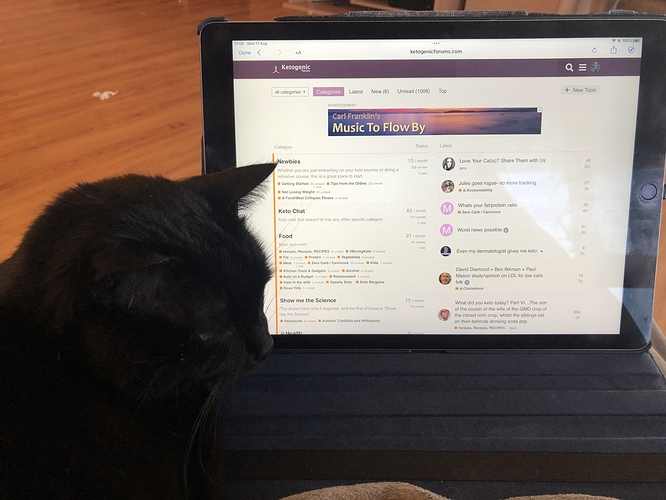 And then there was Paddington’s Marmalade Sandwich. Yes, that’s what he’s called! 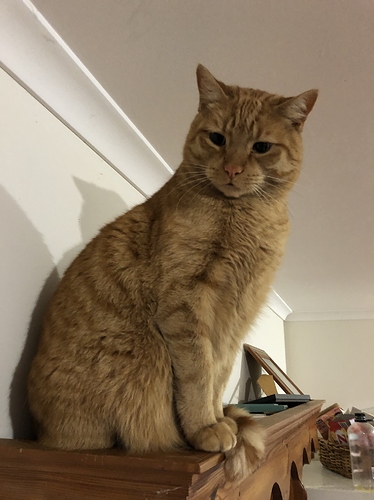 What a handsome ginger : )

This is my old boy, Eins. Lost him a couple of years ago at age 17. 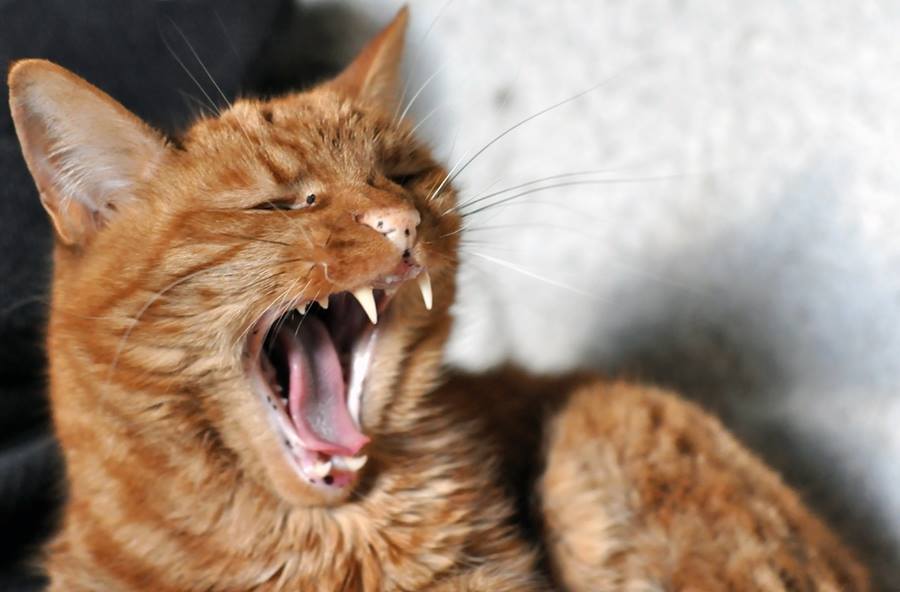 Here he is with a new addition to the family at that time; Mr Winch-hammer (yes, that also really was his name xD long story… ) 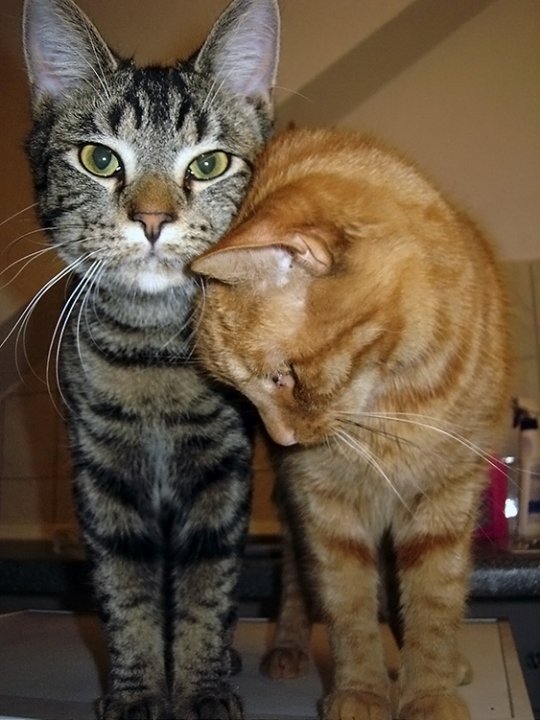 Orange kitties are my favorite! 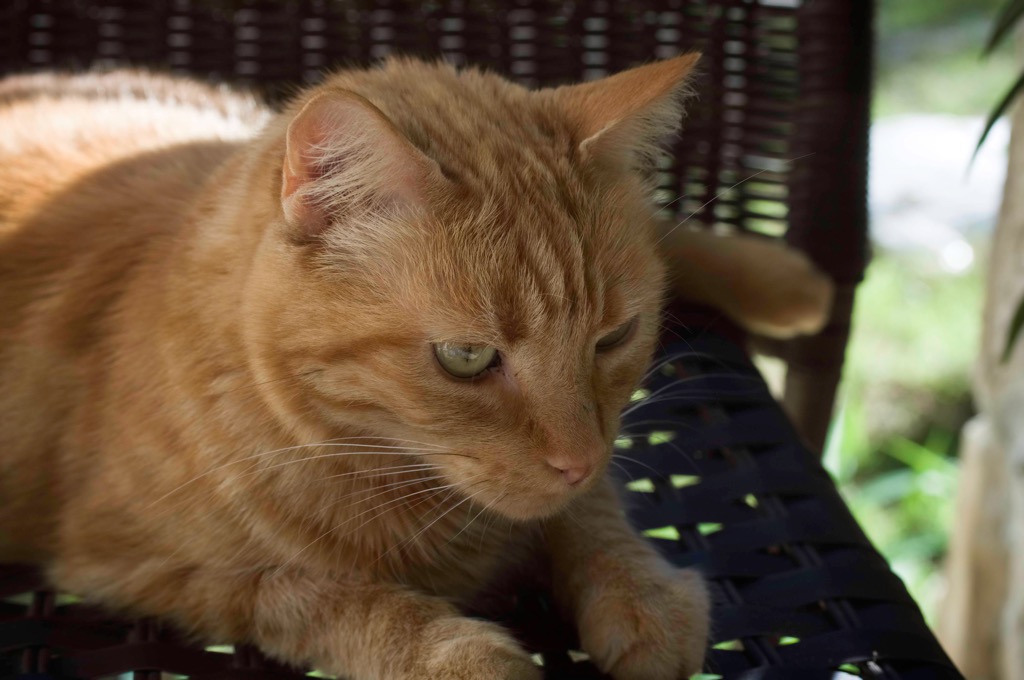 Maine Coon and such a sweet girl.

Here is the size difference between her and a tabby, although Leigh Leigh is on the small side. 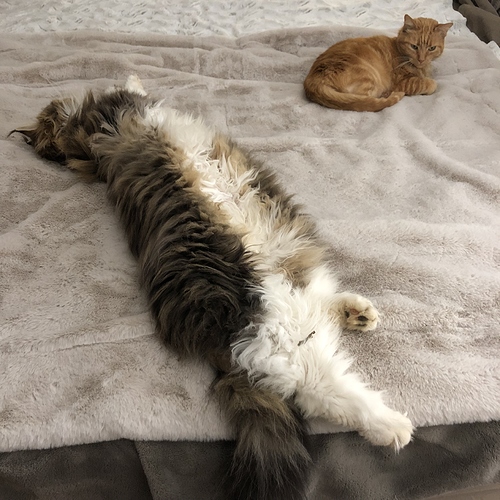 Gone but not forgotten:

Sammy, sister to Leigh Leigh rescued from a dumpster - she was part Maine Coon 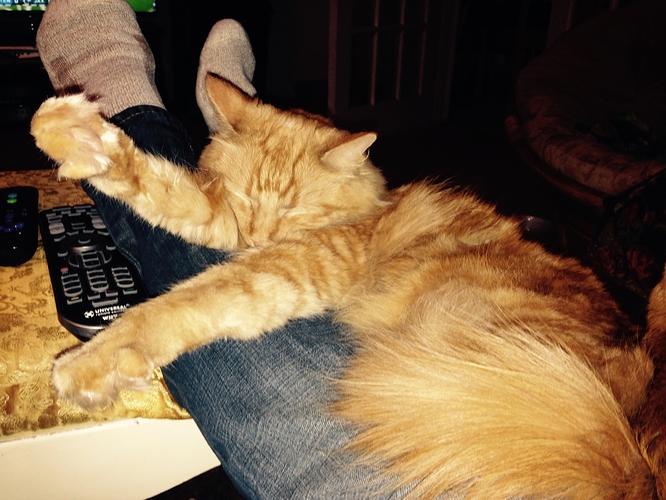 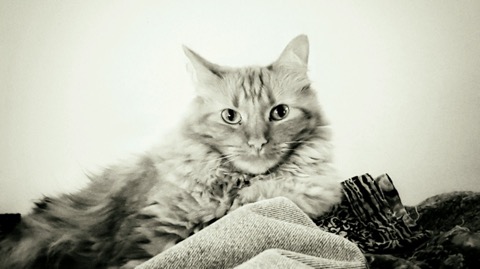 And Max who made it to 18. Most personality of any of my cats - was a hoot. 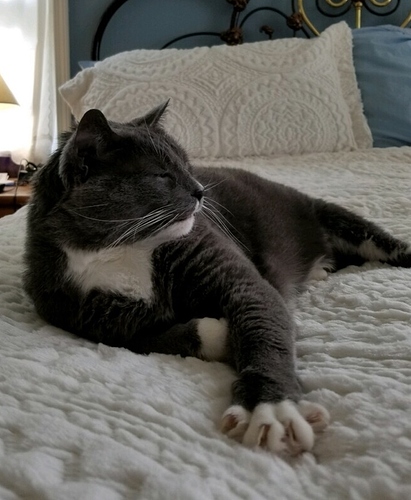 My girl Dilemma when she was a wee thing: 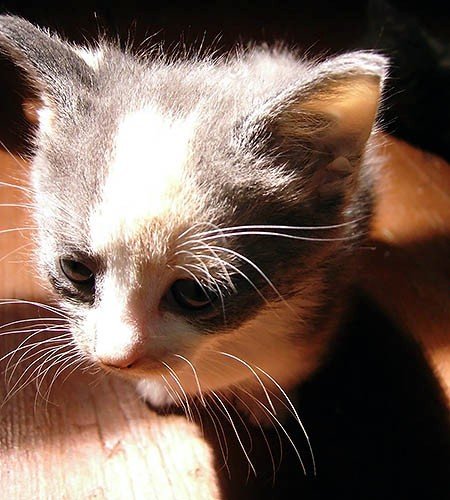 Winch when he was made mainly of ears: 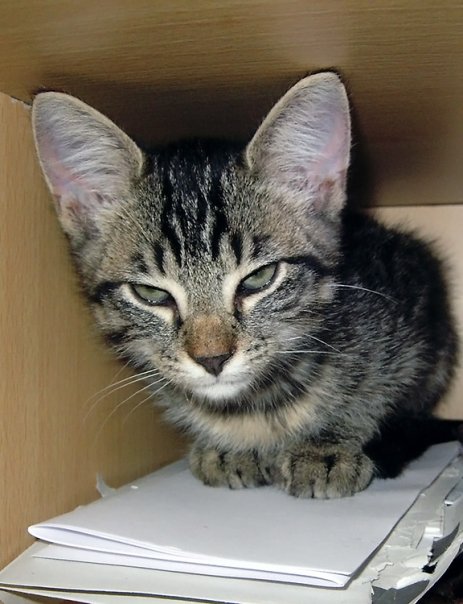 Mamma cat ‘Frog’ with her litter. The family a while later (all but Dilemma… guess she was off doing her own thing!)