Since we have a thread for dogs, I thought why not one for cats?

We adopted 2 brothers 2 years ago. Their mother and 2 other pregnant females were dropped off at a housing development in a town about a half hour from here. Luckily, they ended up coming to the home of a warm-hearted woman, Betsy, who kept them and the 13 resulting kittens fed.

We had applied to the local cat rescue organization to adopt a couple of cats, but were turned down because of our age. They didn’t explicitly say that, but we could tell from the wording of the rejection that that was the case. In retrospect, I’m glad that happened, otherwise we wouldn’t have our orange boys.

After the rejection, I came across this picture that Betsy had posted and we fell in love.

Barney (in front) and Burt stole our hearts. 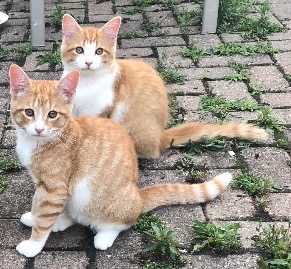 Since they were nearly feral, they aren’t lap cats, but they do like being next to us on the sofa and Barney likes to ride on the seat on my rollator, especially when I’m getting something out of the refrigerator, LOL.

Here they are 2 years later. As you can see, they’re very uptight and nervous-NOT. 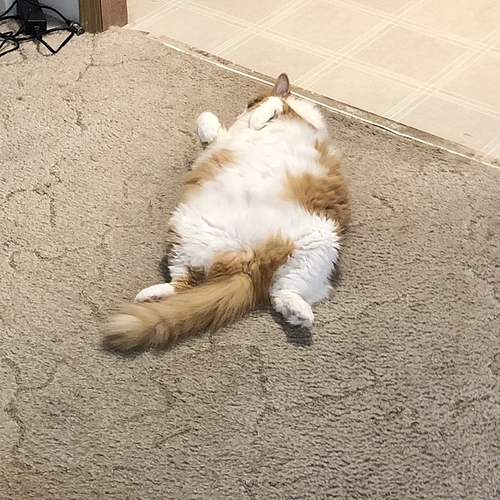 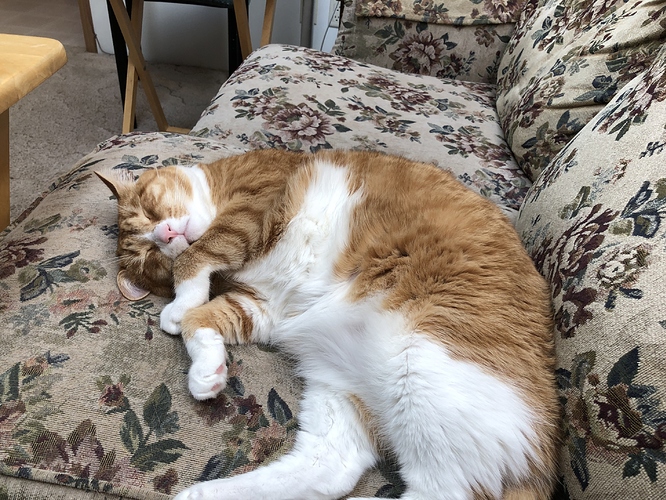 We have 5 cats, all rescues. 4 rescued directly off the streets by us, one we adopted from the shelter.

I don’t have any recent pics to share. I’ll try to snap some for the thread.

The cat I use for my avatar image is one of the 5.

S/he /is beautiful, love geen eyes on black cats.

Good for you, rescuing so many!

He. Named Angus. His eyes are actually yellow. He was a teenager in that photo. Now an old man of 7.

Oops, sorry. Must be the color hue on my iPad.

Angus is one handsome dude. Years ago, we had a black cat named Spot (because he didn’t have any) whose favorite sleeping spot was stretched out along the banister at the bottom of the stairs with his arms & legs hanging down either side. 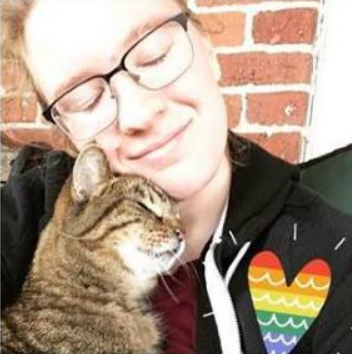 My niece and the infamous Bob the Cat. Bob was so friendly and mellow that he was legendary.

My brother’s place featured as many as 12 cats at one time, and all the others would be doing nutty stuff. Bob would be sitting on the porch, and it was as if he’d knock the ash off his cigar and look over at you while shaking his head back and forth. “Crazy, huh?” he’d say.

Bob passed on a couple years ago. Farewell, old boy - you were a special one.

You can feel the sweetness & love radiating off him in that photo. 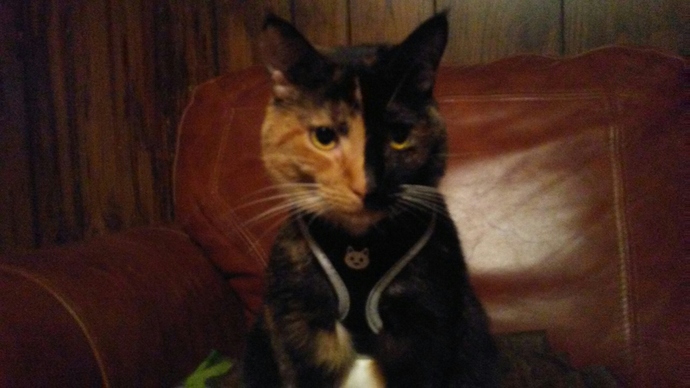 He’s gorgeous! What’s his job? Is he a chimera? He looks like it with the color split evenly down his face. 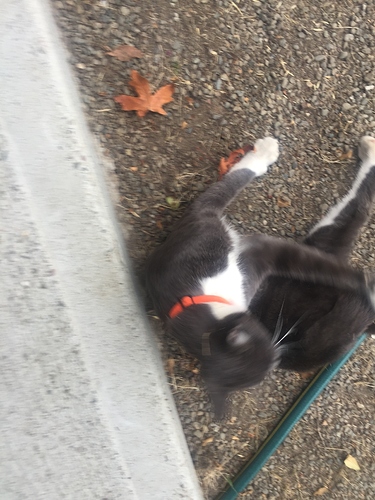 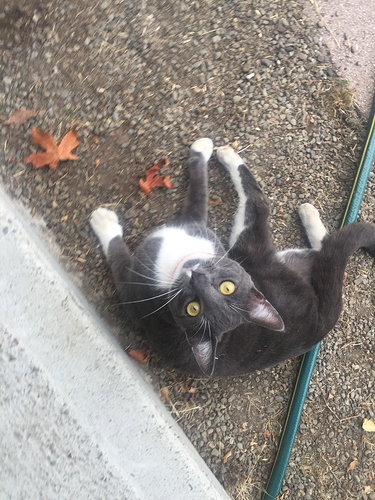 Young feral male cat I have been taming, he’s free and not really my cat. I feed him a carnivore diet.

What a cutie! I’ve been following his adventures on your accountability thread. His fur looks like it would be softer than mink to the touch

Her main job is to keep the pup and I company when we travel for our work. She is obedience trained, and acts like a puppy… tail wag and all.
The reason I call her my working Feline, is whenever I am moving my dog and equipment into whatever hotel I’m staying at, there is always several people who see me wearing my K-9 clothing and equipment… carrying Gnarlee and her travel cage.
They do a doubletake… and always ask. I always tell them she is my Working Feline.
Her occupation stuck.

A Cat Has No Name 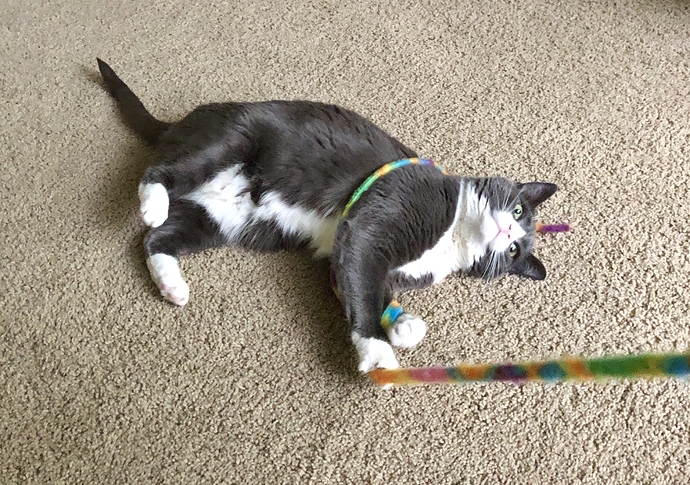 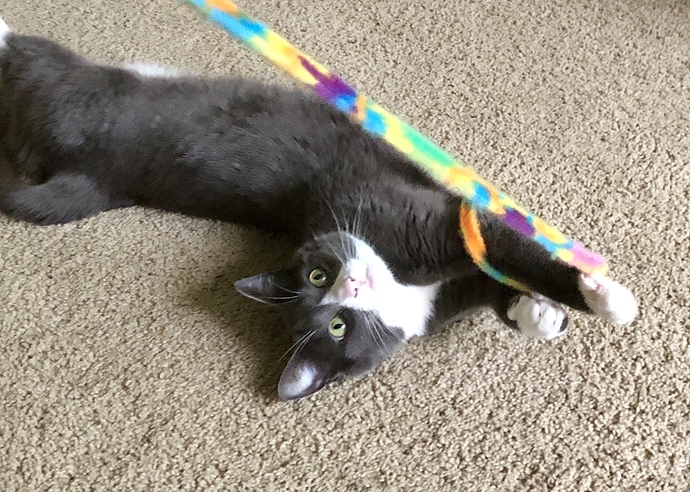 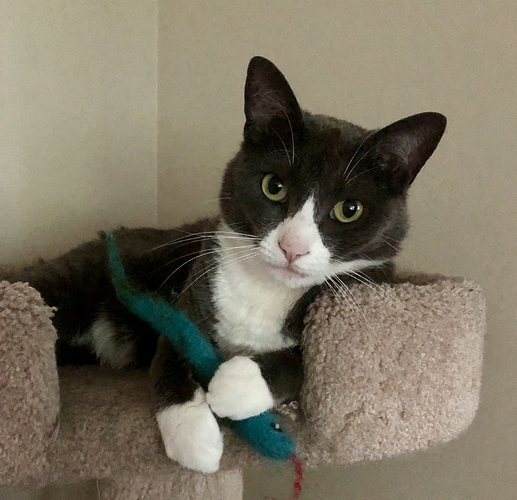 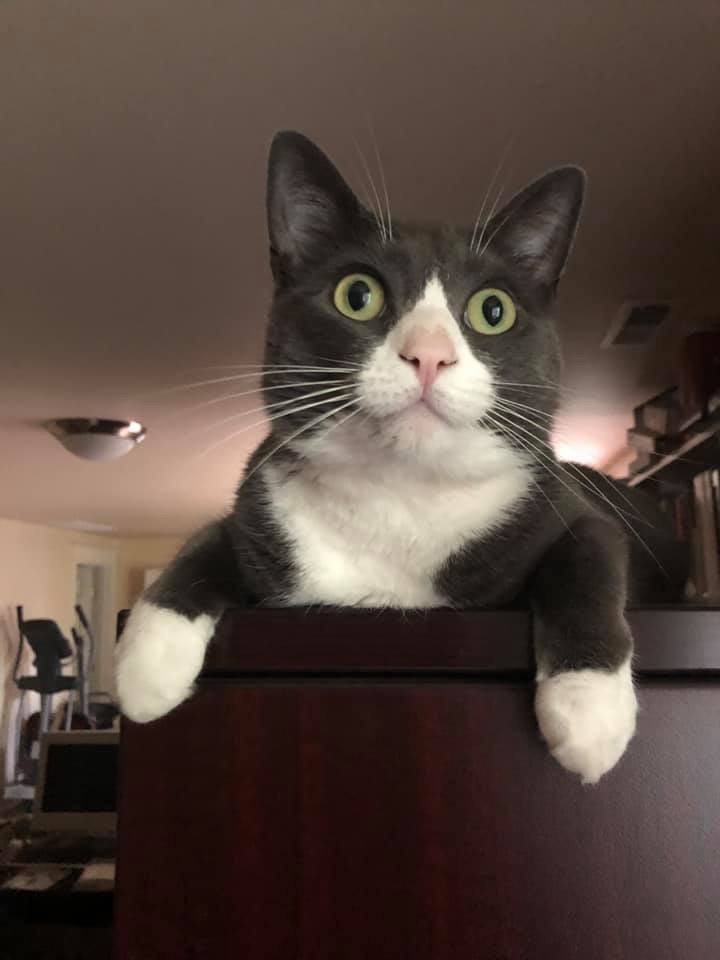 That is amazing, I did not know that you could train a cat. Although, my cats understand the word no calmly spoken and a hand raised palm out between them and whatever it is they are not allowed to touch. And they remember after usually only one time.

What a charmer! A sweet gorgeous little face.

I love the different “moods.” 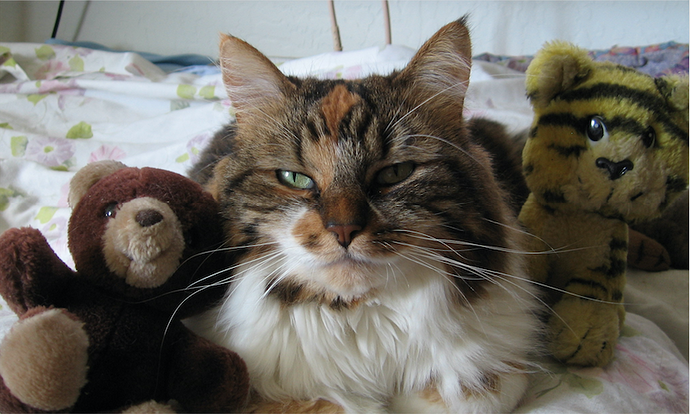 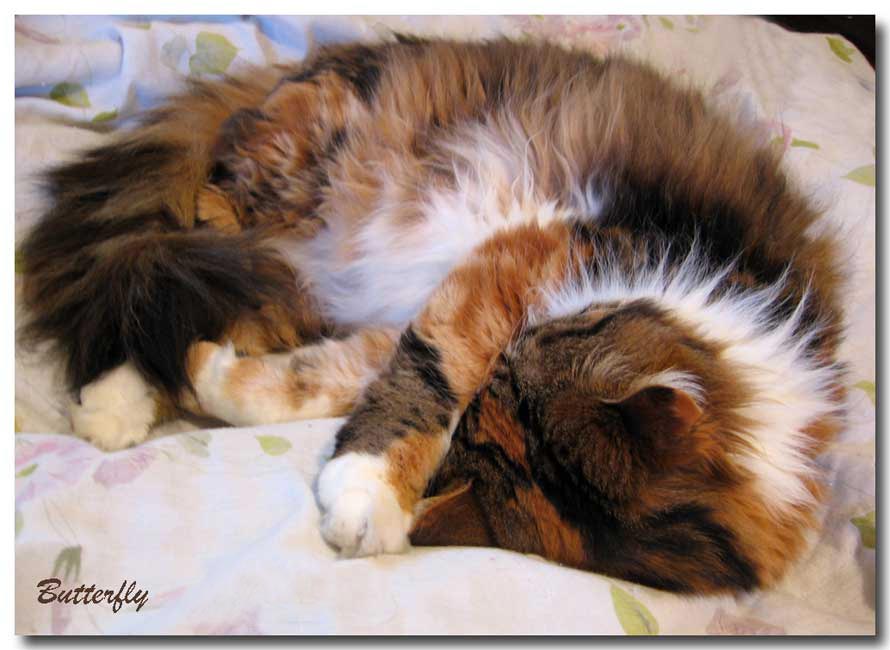 And her little sister, Vevie, also rescued. Oh no, we don’t spoil our kitties at all. Riiiiiggghhhttt… 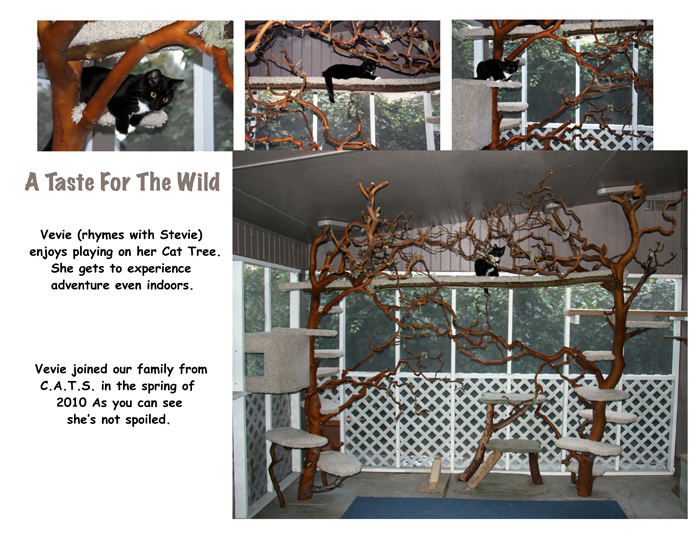 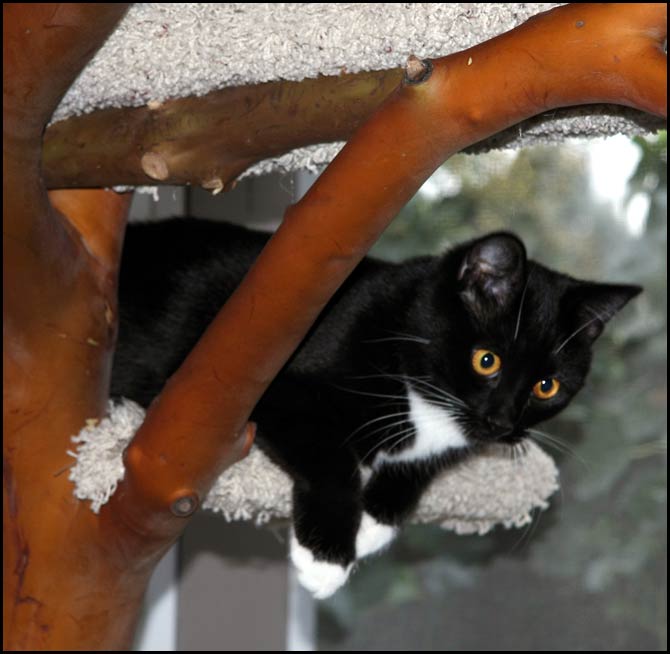 Wow. That is one hell of a catio. 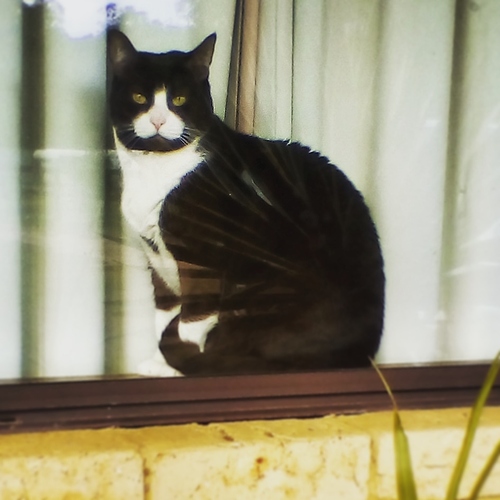 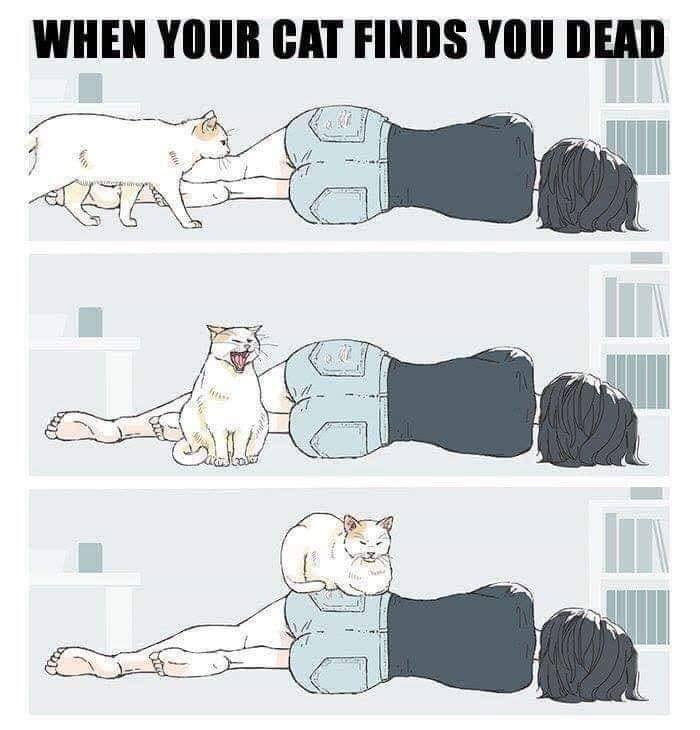