Well, we continue to pull tables full of produce every couple/few days and the Wife’s been posting those mostly on FB. And along with the Wife delivering stuff constantly to all the neighbors, and me bringing in what I can carry at work, we’re keeping the abundance from getting too crazy at the house. - Here’s the second load I brought to work a couple days ago… I tell folks I try to pull stuff before it gets too big (which I don’t mind myself, mostly the Zucchini since it doesn’t get hard like the Yellow Squash) but it grows so fast and overnight, it’s hard to catch them when still somewhat small.

I went back and re-did the chicken wire this year, and put it on the inside, since a neighbor accidentally hooked and pulled some off when he was cutting near my fence. So this has helped keep the vegetable fur balls from getting in there, but unfortunately, I have to deal with some Squash bugs that are taking out some of my plants.

But it’s been rough being able to get out as much as I would like. Between the bad storms, heat, work, etc. (Not to mention not having any hot water! And it’s been this way since last Sunday evening. So I don’t look forward to the

showers, like last night after cutting grass. But I’m hoping to get the boiler fixed as soon as possible. … If I thought the Rabbits would take care of the bugs, like chickens, etc. I would surely let them back in! I still see them everywhere, so I’m guessing they are waiting for another break in the fence to open back up the salad bar. - This morning I counted 11 just in the front area of my house, and less than 5 minutes while sitting the vehicle waiting on my Son. These 4 ran out of my front yard, and down near the neighbors driveway, and the others were on the sides and behind me. … I should really look into some Keto Rabbit recipes.

But like it or not, I’m planning on getting out there today and seeing what I can do with the plants that died off, plus I have a couple trays of seedlings to still plant. There’s a chance of more storms Saturday, so I could get rained out again. Just hoping there isn’t too many Squash bugs to deal with. I’ve only seen one over the past couple weeks, while picking stuff. But they are not always easy to find either.

We don’t have bunnies near our house. Too many predators, I think. (One reason we don’t have chickens, as we have the space.)

That Alton Brown recipe was great. I would cut the ribbons smaller (slice them, then cut in half or 1/3). I could not find the frisee (spelling?), but we used parts of a Spring mix to add crunch. I’d also add a bit more nuts to add more crunch.

Neither my wife nor I got stomach issues after this. We stopped using spiralized zucchini because of stomach issues. Maybe the salt “bath” plus waiting 30 minutes gets rid of something?

I can see not wanting to go over 20 grams per day. I have a slightly looser requirement in the summer. I even ate some strawberries we picked. I figure I didn’t get heavy eating in-season fruits or vegetables, so some periodically wouldn’t be bad. And there’s some evidence that periodic carb ups help with leptin, though really eating part of a salad probably is not a lot of carbs.

Anyway, I’ve always wanted to try rabbit. The local store has it in stock all the time, but I’ve never tried it. Will have to give it a go one of these days.

Yeah, most of the guys I know do eat them, and I even have one who asked if he could bring some of his traps over to then re-locate some to his area where he hunts them with his beagle. But I told him I couldn’t have a bunch of traps set all around my property & I wasn’t going to get stuck checking them!

Not to mention we do have some Cats in the area too, (pets and some feral) not to mention, Squirrels, Raccoons, Opossum, Skunks, Fishers, etc. And I explained that most of the Rabbits now stay outside of my fenced yard, since my pups love to catch, kill and eat them.

So those that do venture in, risk never leaving. (We regularly find signs, or parts left of them, that we have to clean each time one gets caught within when we let the pups out) But I also have them across the road, on the Farm I hunt.

Haven’t had the chance to try the recipe yet. Been dealing with having no Hot Water since last Sunday evening and still waiting for the parts they ordered for replacement. Sucks with the excessive heat, plus I sweat year around. But I won’t chance running it presently with a possible leak on the fuel line/tip.

I do keep to under 20g a day myself, but have gone slightly over that maybe 4 or 5 times in the year. But it’s usually no more 25 or so. But this is also usually when I’m eating stuff like Zucchini Boats. But have no problems with doing more really, I just don’t eat a lot of the higher carby foods any more, so it’s really not as easy these days. I think I’ve done closer to the 40-45g twice in the last 3 years? Both times when I just decided to go ahead and eat a nice sweet potato with my meal. I always liked them.

Happy Forum Anniversary, Dave (and Virginia if she joined on this day too). You two are a lovely couple, and are both a great inspiration to us all on the forum. Your warmth, kindness and love for each other always radiates brightly. All of your gardens look gorgeous and I am sure are delicious.

Thanks kindly, Susan. And good to see ya back as well. … I know V said she was going to reach out to ya not that long ago, just to see how you were doing and making out. Cheers…

With even more storms coming in tomorrow into Sunday, I decided to get right into the Garden after work to pull what I could. It’s always a mud pit for a while after the rains. … But along with pulling the Yellow Squash, Zucchini, Cucumbers and Cherry and Pear Tomatoes, I also had to pull some of the large Green Tomatoes. … They were pulling the plants all the way to the ground, and I think some of them think they are actually Pumpkins. Not sure what type of Tomato they are, since the Wife picked them up? But we’ve had them before, and they grow huge compared to the regular ones. 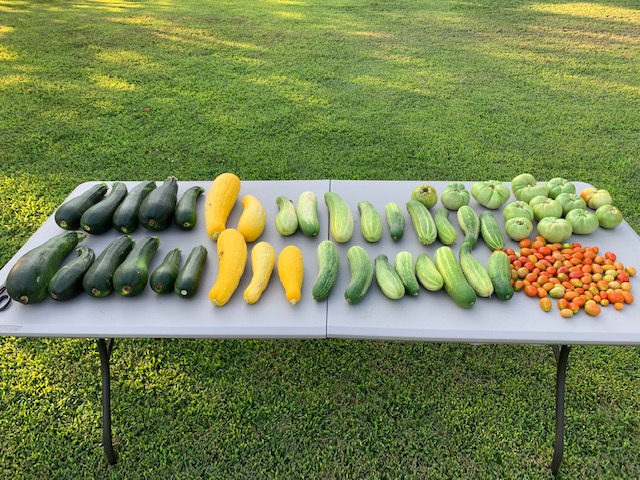 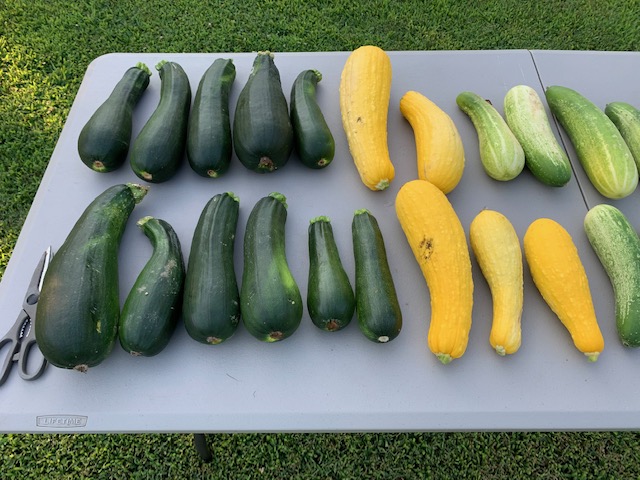 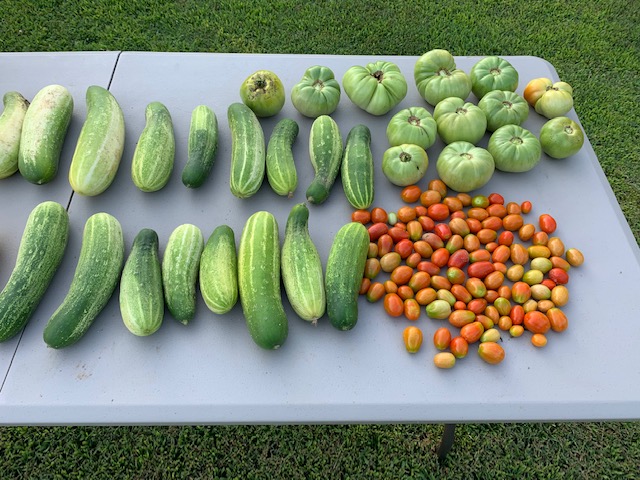 These vegetables are beautiful --that is awesome. I hope that you get your water back soon, you have done really well given the circumstances!

Too many predators, I think. (One reason we don’t have chickens, as we have the space.)

You can have chickens with predators but you have to be willing to put in the necessary protections. We have hawks, coyotes, bobcats, raccoons and even the occasional mountain lion and have not lost a single chicken in 2 years (* knock on wood *).

We listened to my neighbors and learned from their mistakes.

Well, I just finished up spraying the Squash and Zucchini plants, and there were plenty of both Squash and Idaho Potato Bugs. … I concentrate mainly on the bottoms of the plant, but as spraying you’ll see some trying to climb to avoid the spray. (They do the same with water, just heading to higher ground)

But in case anyone’s interested in this particular method, which works quite well… the Mix I use is 1 oz. Blue Dawn Liquid and 1 oz. Vegetable Oil, to 1 Gallon of water. (Make sure it’s the Blue and not the Orange.) … And keep in mind that the objective is to actually coat the little buggers themselves. Them just walking on the wet areas doesn’t do the job. By spraying their bodies, it suffocates them, also quite quickly. Most times in just 30 to 60 seconds. So if you still see them moving about a minute later, just give them another blast to be sure. - And you can repeat this every 7-14 days. … They can really do a number on a nice Garden, and I think they have taken out at least 6 of mine, with signs of whitening on some others. So I just hope I caught it in time.

But yellowing leaves, and/or leaves wilting are good indicators your plants have un-wanted guest you might want to visit.

I hope that you got them all and that your plants will be okay!

the Wife told me she saw some little Furry Bastards running around inside the fence,

Happy Forum Anniversary, Dave (and Virginia if she joined on this day too). You two are a lovely couple, and are both a great inspiration to us all on the forum. Your warmth, kindness and love for each other always radiates brightly.

Thanks for the kind words Susan. And, I actually join in Aug. 3 months later because I checked with my doctor first.

Yes, I know. That was ‘MY’ version of the story…

You probably said something along the lines … “Awww, look Dave, there’s some cute little Bunnies running around in the Garden”

But, that going through my ‘thought filter’, actually came out as “Dave! There’s little Furry Bastards running around in the Garden!”

They keep it up and one of em’ going to find stardom in the way of “What Did You Keto Today” with some Cherry Tomatoes decorating the plate around them.

Honey, I wanted to say thank you very much for taking care of me, doing the meals and stuff since my procedure. I love you.

Not a problem… Love ya too.

You guys are just too cute!

Thanks, Darren. … I’ve just stepped away here recently to take care of some things. But still trying to check in here and there when time permits, mostly to deal with Spammers, Flags, etc. But haven’t been partaking in many conversations, discussion threads, etc.

Happy Birthday to my awesome, amazing husband. I hope you have a wonderful day. Love ya!!! 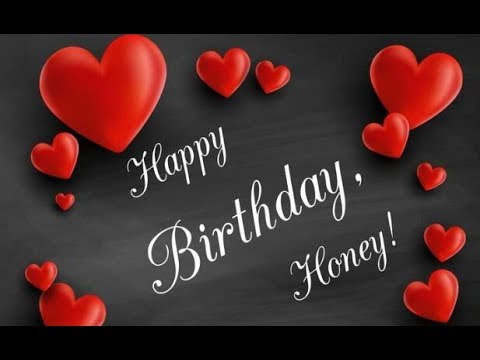 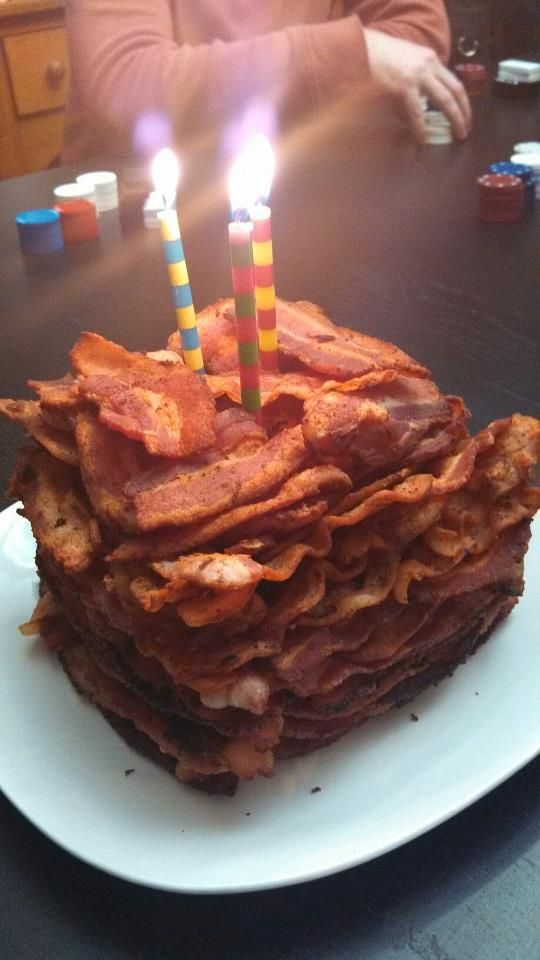 Thanks, Darren. Hope you are doing well.

Thanks, Hun… But if that’s a live shot of a Bacon Cake for me, you’ll have to put it in the fridge since I’m presently still Fasting.

What a nice cake!