Starting work at 7? Man, labor laws used to be lax…

I’d say hoping you and yours are all well… but I just hope everyone is okay. Scary situation.

@monsterjuice - It was indeed. It’s why she called me, and I could tell she was upset right away. And yeah, even though we do have water pretty much all around us, I still don’t envy you for your Tornado’s though. We don’t get many here regularly, but do here and there with some of the bigger storms. But I would much rather deal with flood waters, since they are a bit predictable being they follow the grading of the land, so we know where all the low-lying areas are. Tornado’s just do what they want.

And no, as far as I know, that one lady who perished when the tree fell, was the only fatality in our area. I believe there may have been a few more in other counties/states, but don’t know for sure?

Starting work at 7? Man, labor laws used to be lax…

But then the scariest thing wouldn’t be starting work at age 7, but becoming a parent at just 18 months…

And thank you. I do believe folks are slowly getting back to things as the waters continue to recede. But as I mentioned, the damages it left behind will take some time to repair. … Reports on a few roadways have been coming in. Here’s an image of Point Lookout Road, down near the southernmost tip of MD. 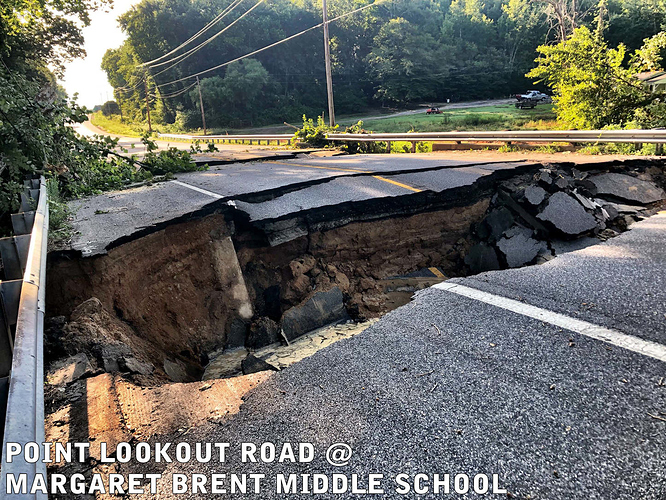 I grew up in Northern California. No, not San Francisco. We considered that down south. I mean Northern California. So earthquakes were our main source of natural disaster. With the occasional tsunami. I always figured earthquakes are nice because you don’t know they are coming. You just deal with the now, not the worry. But that is in contrast with tornadoes. I can see how planning for flooding can be comforting. So I guess it is tornadoes that are the worst. Enough warning to panic, but still not enough warning to be really ready.

But also, earthquakes are not as scary when you live somewhere with skyscrapers reaching to 4 stories… well one 4 story, and one 3 story building. And many gingerbread houses made of flexible wood frames. But also so damp that fire isn’t a huge risk. An area where you and your sister play “What’s the richter scale?” That is when you guess how bad the earthquake you just felt was and then watch the news to see who was closest. If you notice it happen it is at least a 4.

There is a street thru our biggest “city” where all the streets are off… meaning the cross streets don’t line up at the intersections, because earthquake. They just repaved it and made off kilter intersections.

But that is in contrast with tornadoes. I can see how planning for flooding can be comforting. So I guess it is tornadoes that are the worst. Enough warning to panic, but still not enough warning to be really ready.

I concur. They are more scary not knowing where they might hit, or go, once they take to land. And yep, you can only prep so much, and it’s mostly just praying for the best outcome when they do show. … As you say with floods, we do plan our best way to proceed, and try to prepare the best we can based off the forecast, satellite imagery, etc. So we do have some information as to what to expect. Even though things seem to change some, you do have a good idea of what to expect. … It’s those individuals who think they won’t be affected or simply ‘brave’ the outcome that usually end up being the folks that need saving when it’s all said and done. And this puts others in unnecessary dangers due to their stupidity.

I also like your thinking on Earthquakes. The no warning is probably much better, taking out the waiting and worrying aspect in the anticipation of the event. We also don’t get many of those around here, but have had a couple hit, with only a couple being of size.

no warning is probably much better,

Especially since it doesn’t mean you can’t prepare. Make sure building codes are appropriate and enforced. Have your go-bag ready. Boring but important. Meaningful preparation for what-if.

My husband grew up in Anderson/Redding/Shasta area, its gorgeous up there!

Redding is far north enough, but still too big time. They had a Costco! I’m from the coast.

We just did a trip up there for the 4th, wandered thru the redwoods and Trinidad and Crescent City. So lucky to grow up by the water! 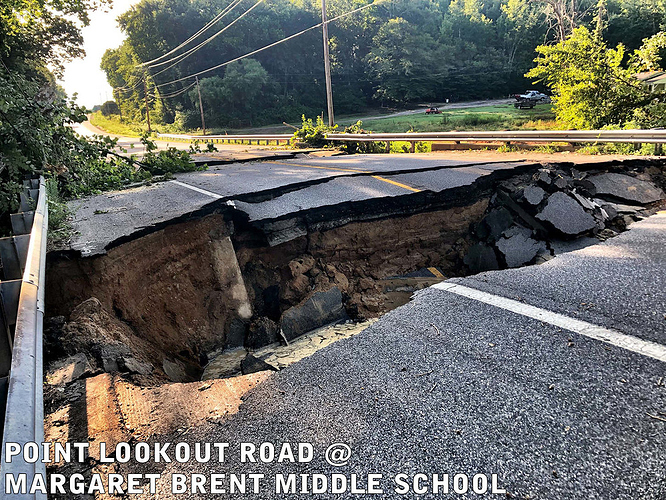 Well now that would wake one up, huh? Or at least jiggle one’s coffee container a little.

Week 115: Well, I may have overdone it a bit yesterday? My Knee was already still a bit swollen all this past week from spending all that time out at the Pumping Stations, which is not rare. And then I did quite a bit out in the yard yesterday, cutting grass, cleaning up and working in the Garden, after picking up all of the tree debris from when the Hurricane went through. - So I really started limping yesterday in the evening & woke this morning with quite a bit of swelling in the right leg, but mostly around the knee. I’ve been icing it off and on all day and taking some Advil. Between this and drinking a ton of liquids last night, wasn’t surprised to see a bit of gain this morning. At least the icing seems to have helped some, since it’s not a sore now, though it still has some tightness from the swelling hanging around.

That’s a nice trend back down though.

Yeah, up until the last 2 weeks, it was pretty steady week by week. (Nothing big, but it was going down) But I have a Jeep at work that does my knee in anytime I spend too much time in it. There’s not much in the way of leg room and the seat only goes so far back. So if I spend a couple days in it, my knee tends to swell up and I can feel the fluid build up in it, mostly the right side of the knee. Been doing this every since I had that inner meniscus strain a few years ago. But icing it a few times yesterday and resting up seems to have helped, so hoping to get back to it this week.

Hey Dave, after the weather you’ve had, how is the garden doing?

Hey Dave, after the weather you’ve had, how is the garden doing?

In a Movie Title… “Gone with the Wind”

- It’s pretty much been obliterated.

*I still have Cherry Tomatoes and Yellow Tomatoes coming in, but as far as the Squash and Zucchini, their toast. Even the new batch of Zucchini (2 dozen plants) that was just starting to show production got demolished. You can’t even see where they were now since the weeds jumped up a foot or two with all this rain and not being able to get in there. … I swear, in the past 3 weeks, we’ve had 2 maybe 3 days? where we didn’t have major Thunderstorms coming through, stomping us. It’s been crazy, and they are calling for more. So not sure how much longer the Tomatoes will hold out?

Oh, and strangely enough, V had 3 of her String Bean plants suddenly spring up from the dead and are actually looking good, so they may provide her some beans after-all? And the 6 Banana Pepper plants are also showing signs of life, finally. It’s like these last two waiting for the heavy rains to pass before they decided to start producing. But that’s maybe 10% of the Garden? So 90% is done for the season.*

Also, had a little friend show up at work this morning, and was hanging out on the metal railings of the steps out front. Since they were cutting the grass around the office today, I moved him over to the trees up on the top floor, so he would be up and out of danger. First large one I’ve seen in a while. Was about 5" or more, but was watching me the whole time, wondering if I was Friend of Foe. 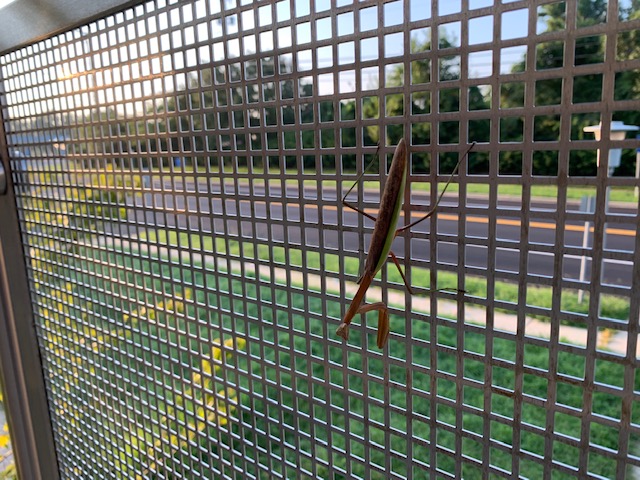 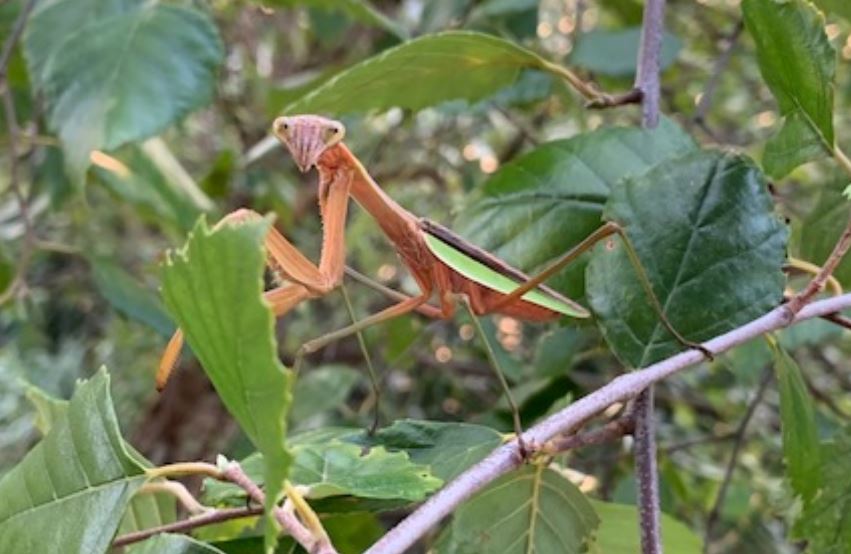 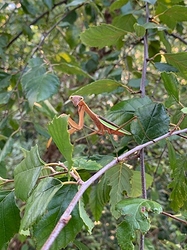 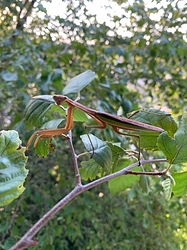 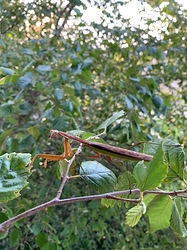 You should of brought him home to me as a pet lol…j/k.

But you know how I am. I see your new railings at work are not open rails anymore, that’s good…safer. It’s been a while since I’ve been by there. Thanks for sharing the pics… cute little guy.

You say that about everything I find.

… Yep, they finally got them installed… Won’t go into how long it too them to finish the job though.

Yep, still raining, but I guess that’s what it does when you live in a friggin’ Rain-Forest.

… Shows I’m down 2.5, but as I mentioned last week, I did have quite a bit of swelling in my leg/knee, so wasn’t sure the added 3 pounds I saw last week was not simply from that? Plus, I ended up Fasting a couple times this past week, albeit small ones. A 44 hr. & another around 36 or so? Just some days I decided to skip here and there, not feeling like eating.