Week 98: As the chart shows I’m still bouncing around a bit, even though I haven’t been doing much different overall. (at least as far as food) But I’m hoping with the better weather I can at least get more activity in. With all the craziness that everyone is dealing with, at least the weather hasn’t been too bad overall. Though we have been getting some extremely windy days this past week or two, which sucks. I spent all day yesterday out in the yard, weed-eating, mowing the yard and doing some needed cleanup, etc. Then spent another 5 or 6 hours today doing a second, full depth till to the garden. (Did first till last weekend) Finally got it all tilled and raked today, but decided to hold off on planting, since V said they were calling for more storms and wind tomorrow (Monday). So will probably wait till Tuesday to plant everything. (I’ve lost my share of newly planted stuff from both heavy rain storms and extreme winds) But from what the weather shows, it looks pretty good after tomorrow’s storm/wind event… 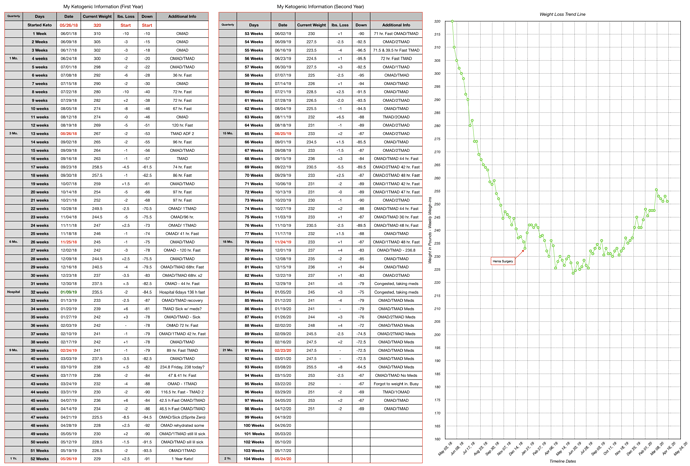 2nd Till & Rake. But wish I could have planted tonight too. But think it’s the better call to hold off… 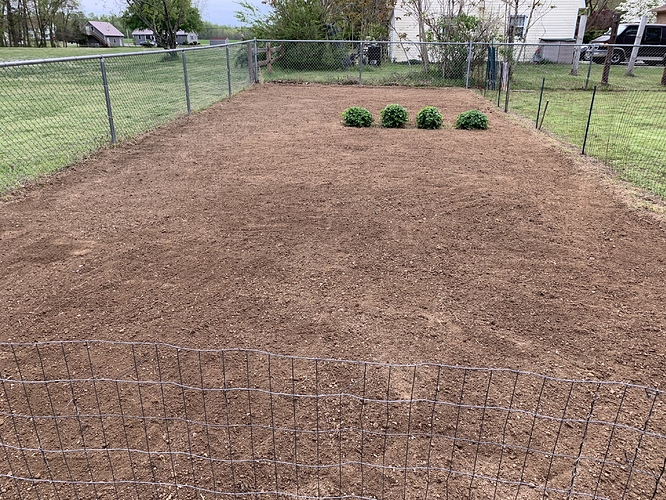 That’s some good-looking dirt, Dave, and so admirably weed free! Okay, okay - I know you just tilled it…

Thanks, Doug. Now if only it would stay that way throughout the growing season without all the needed work to keep it that way.

Though when I stay on top of it, I can usually keep it from weeding up too much, but it does take some work to do so. … I’m actually planning on trying out something new this year to help with this as well and that is using some Cardboard disc around each plant to help keep the weeds from at least growing up directly around the plants. Been wanting to try it, but hadn’t till this year.

Happy 2nd Ketoversary Honey. Very proud of you…keep it up. Love you… Couldn’t find your Thread at first, so I replied on your last food post…lol

Thanks, Honey. Love ya…

Happy 2nd year Ketoversary, Dave, that is really great. I love how you and your lovely wife are doing it all together, and encourage and inspire each other through all of your trials, tribulations, victories, health, happiness and are so adorable and the love you have for each other always comes shining through. You two are a radiant beam of sunshine on the forum, and I wish you both and all your family the best always.

Thank you ladies, much appreciated.

… Time goes by so fast. Doesn’t feel like two years.

Congrats and thanks for your recipe thread. I sent my 86-yo Dad your cheesecake recipe and he raved about it. He isn’t keto but eats low carb and has his blood sugar back under control.

I sent him a tub of collagen to add to his coffee since he wouldn’t listen to my advice. Then sent him a second one when it ran out because it takes a while to see the benefits of supplementing with collagen. His skin was paper thin and bruised easily. Made a believer out of him after 2 tubs so he orders his own now. Talks about it like it was HIS idea all along LOL. I don’t mind - just glad to help him.

Thanks Jane, and you’re welcome. … Glad to hear he’s at least using it, even though it was his idea.

Give him another month and the cheesecake will be HIS recipe

Week 106 Well, it’s nice to say that I’m at least seeing some drop in the numbers here and there recently, which I’m thinking is probably more to do with my recent activities. (Working in the Garden a lot) and been staying busy with either yard work, or stuff around the house. Being home bound for that timeframe because of the epidemic stuff wasn’t helping matters I’m sure. (But still pretty much staying at home anyway, since I don’t go out much to begin with.) … With some crappy weather and everything going on, I wasn’t doing much of anything except working on projects on the computer or just lounging around. But have changed that recently, purposely, so I’m hoping my recent activities will be helpful.

On another note, it’s been a pretty screwed up week to say the least. V’s had two deaths in her family this past week alone, just 2 days apart. Thursday losing the first one, and then Saturday morning we were notified of a second family member that had passed in the night. Then later that day she learned that her Aunt was also put in the Hospital with some serious issues herself, so she’s been quite upset with all this and worrying about her now. … We can only hope she gets better, but have been told she is showing some improvement, but will be in there for a while.

Updated my chart after having some issues adding the third year to it. For some reason it didn’t want to track it properly, so it took some doing to get it worked out.

As I mentioned, I’ve been working a ton outside getting sun-burned and quite sore at times these past couple weeks. Not just weeding and working the Garden, but I’ve also been adding new Rabbit fencing (Chicken Wire) and that is always a pain, physically and mentally, since I’m tying it existing fencing. … I spent 9+ hours out there on Saturday, and 11+ today, also helping a neighbor trim up one of her trees that had some bad limbs which took a couple hours, and then she accepted one of V’s Lemon Balm plants that are growing like mad presently. (They look like a hedge in my Garden) - But after I lost all the plants I first planted due to extremely high winds and heavy rain, the re-planting seems to be doing well now, thankfully. But I’ve been getting a lot done, which is always nice… I’ll post some pics below.

You can see V’s Lemon Balm ‘Hedge’ blocking some of the back plants. (We gave the one on the right to our neighbor tonight, so there’s still three. We also lost most of the Cucumbers for some reason? But still have quite a few plants V seeded, which is more Zucchini, String-Beans, Banana Peppers, etc. 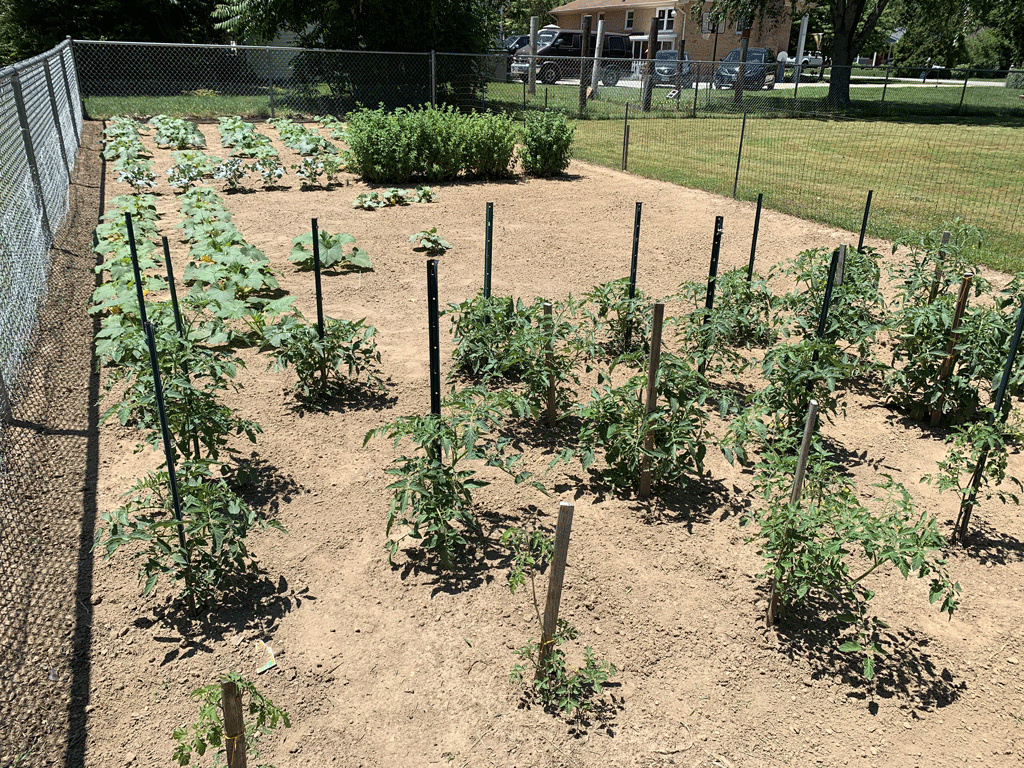 The back third is mostly Zucchini, with a row and a half Yellow Squash, so there’s about 40 of each… 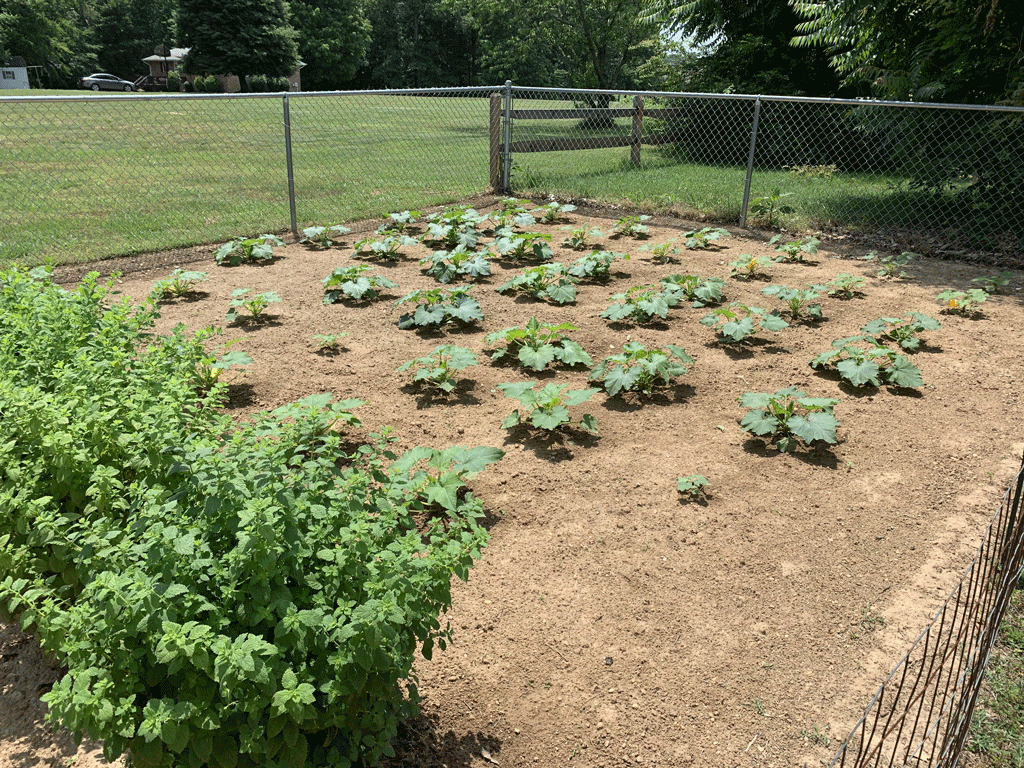 The back third is mostly Zucchini

I am hearing the theme from ‘Jaws’ playing.

Well I’m hoping the extra fencing will help keep out any that might be circling… But I know I sure can’t wait to sink my teeth into some.

I’m seeing a bunch already, both Zucchini and Yellow Squash, so I think there should be some ready this week, no later than the weekend. Both of these have always done extremely well where I’m at, with nice growth rates. But for some reason, peppers not as much? So far only the Banana Peppers seem to grow well, and I can hardly get any Bell Peppers to produce?

Dave, while there may be other factors, peppers are generally really heat-loving, well-drained soil included (like 65° F or 18° C or higher). Maryland certainly isn’t a frigid, arctic realm and it’s already June, so I don’t know…

‘Jaws’ theme - I meant you may be overrun with squash, with that many zucchini plants.

‘Jaws’ theme - I meant you may be overrun with squash, with that many zucchini plants.

Nah, it’s about what I do each year actually. I always give some out to all my neighbors and friends throughout the growing season.

(Though there’s only a dozen and half homes where I live), but I also take box loads to my office and that’s where the feeding frenzy is! But I would definitely rather have too much, then too little.

And you are correct, Maryland isn’t frigid at all, especially in the southern portion. But might be in the running for the most Humid. (I am surrounded by water though) This has to be the wettest, dampest place I’ve ever lived. It is extremely moist and damp and each morning it’s like it has been raining all night. Sure this isn’t helping the Peppers either. But they do get sun all day long, Sunup to Sundown.

I always give some out to all my neighbors and friends throughout the growing season.

Well, apparently princess Khaleesi decided I had slept enough, when she woke me just after 5am this morning.

So took the girls out and then made them a batch of 10 Eggs scrambled. After they ate, I went out and checked the Garden. I’ve been pulling Zucchini for the past couple weeks, but know there was more out there, as well as a bunch of Yellow Squash. … So I pulled about 1/3 of the Yellows out, being some folks don’t like them too big, plus there are so many, I can probably start pulling them every few days. … Of course, the Zucchini’s are doing what they do here, and that is growing like mad. I was just out there on Tuesday past, so was a little surprised by the size of some of them already. - And the Tomatoes are really kicking in as well, not to mention the few Cucumber plants that didn’t die off.

A few pics of the Garden… and I still have to plant all the stuff we seeded. (Probably today or tomorrow) 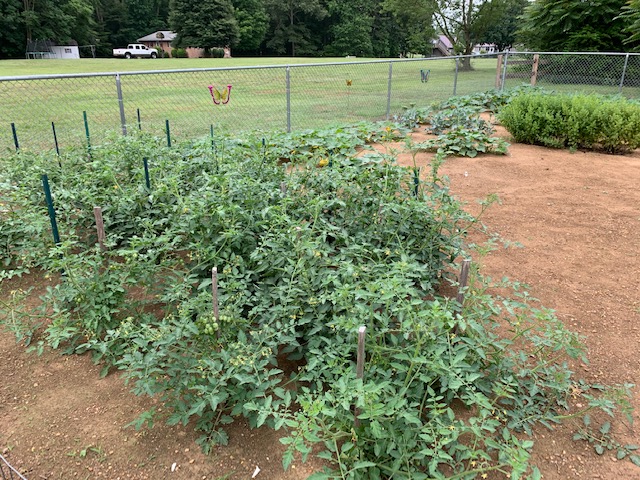 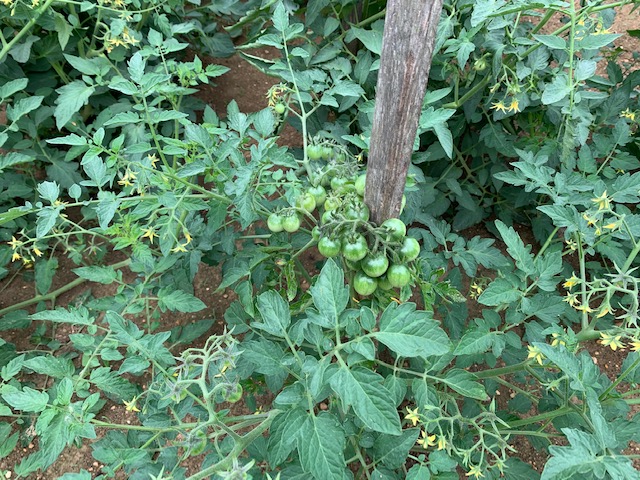 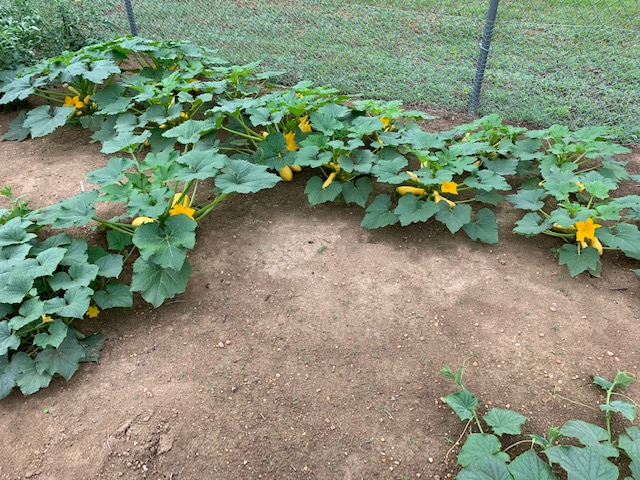 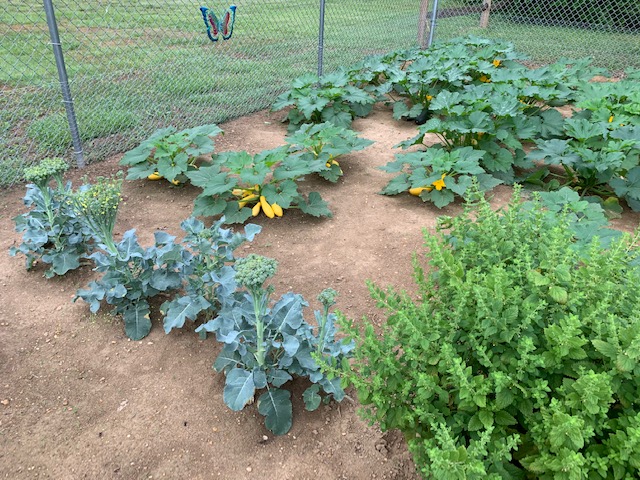 Of Course, Shelby has to visit when I’m in the Garden to get her Zucchini treat she loves. Even though she already had Scrambled Eggs. And Khaleesi also got in on it some, eating a Yellow Squash… 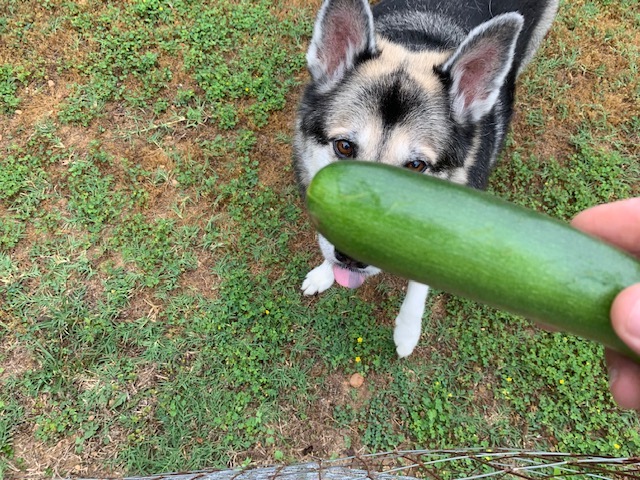 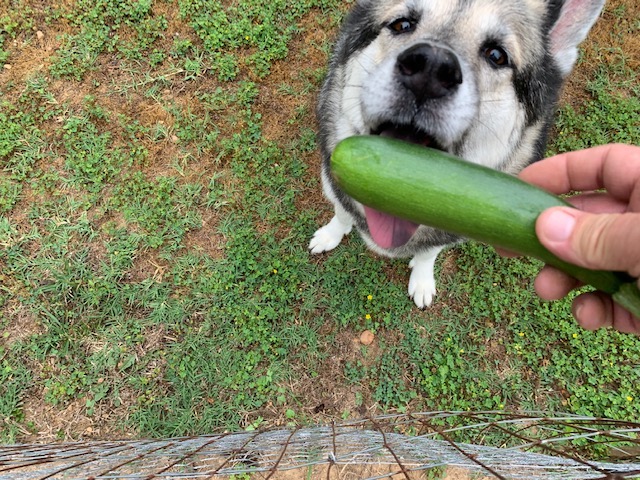 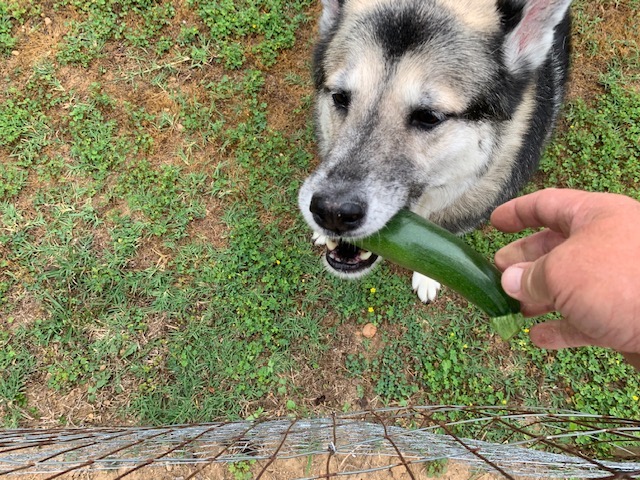 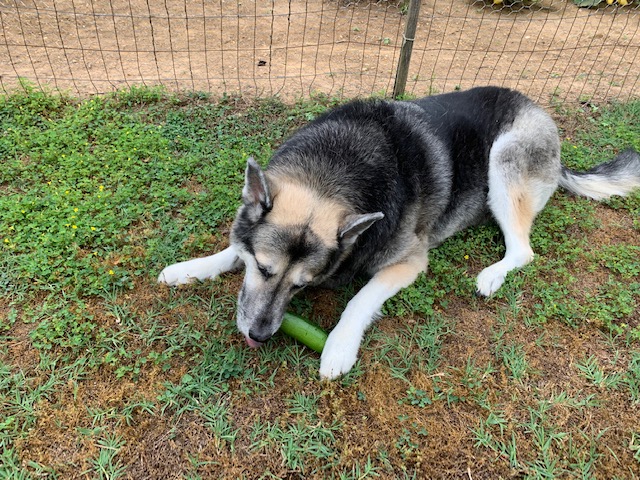 It was a bit of a surprise Khaleesi decided to eat a Yellow Squash. But guess she got tired of Shelby eating stuff. But think she just wanted to get something herself, but she was offered Zucchini as well. 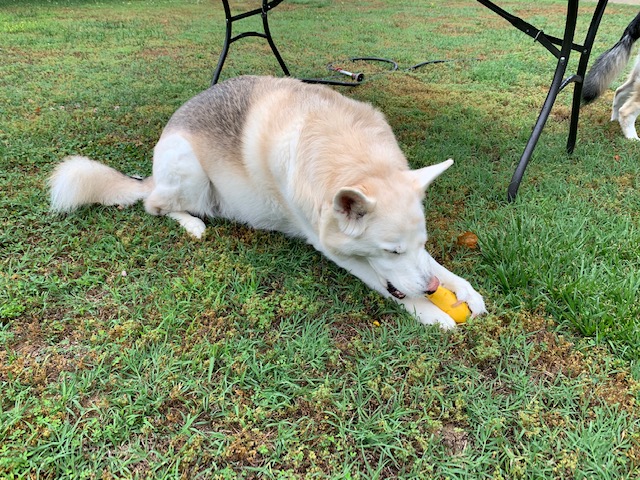 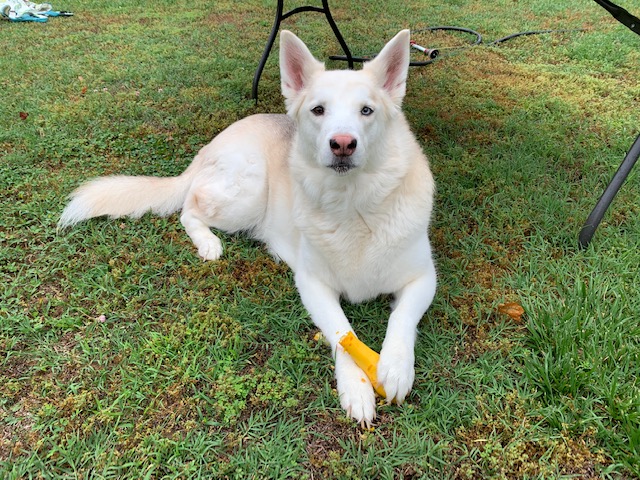 So I did pull quite a few Yellows, I caught them before getting too big, but the Zucchini’s seem to blow up quite quickly, so some Zucchini Boats are definitely up-coming. Probably in the next few days or so… 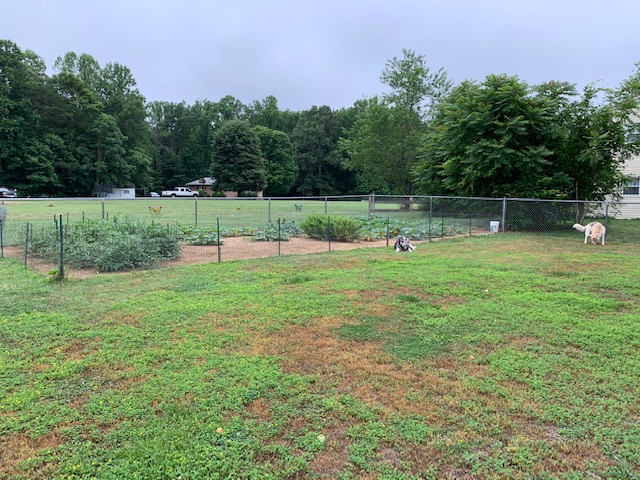 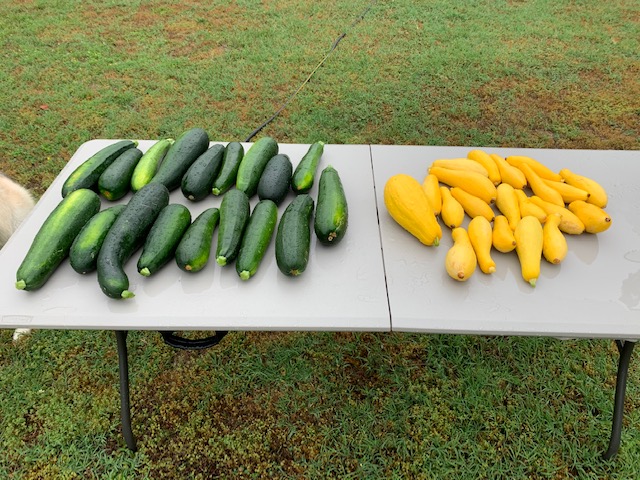 Some of these Zucchini’s grew quite long, where the thicker ones I prefer for Boats… 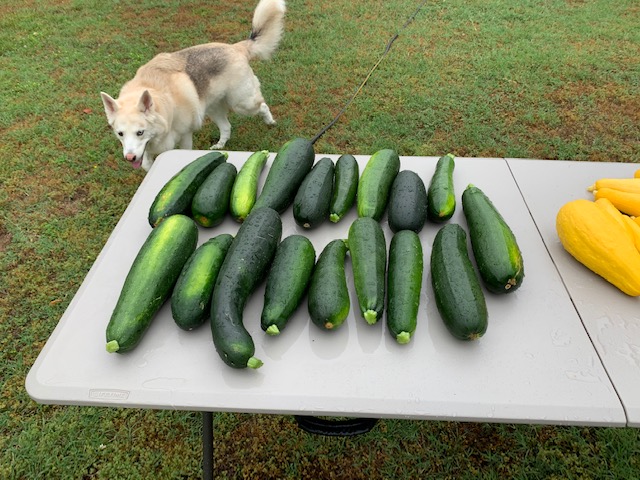 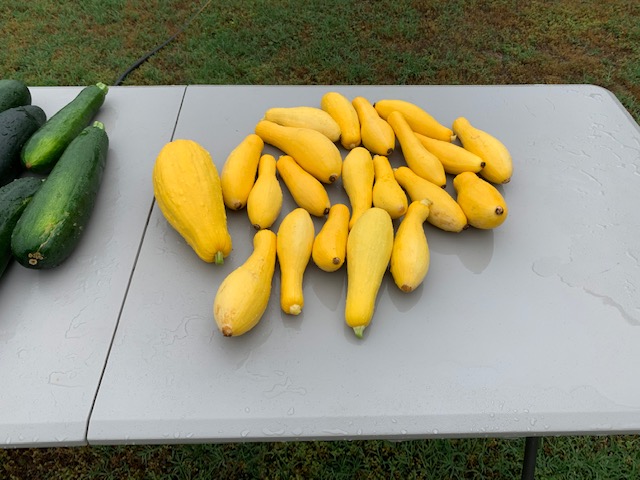 Shelby has that look in her eye… Like just give me five minutes with these. 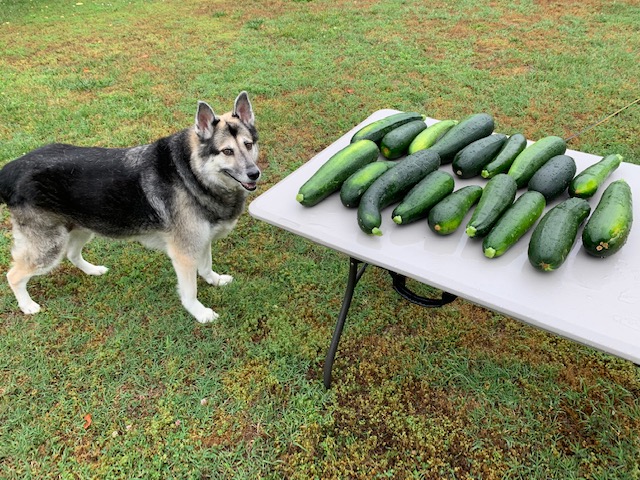 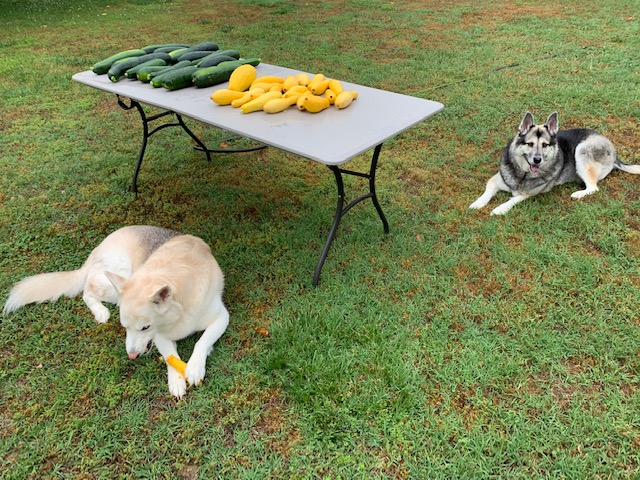 But this mornings Garden pickings produced around 50 lbs. of Zucchini and Squash in total… 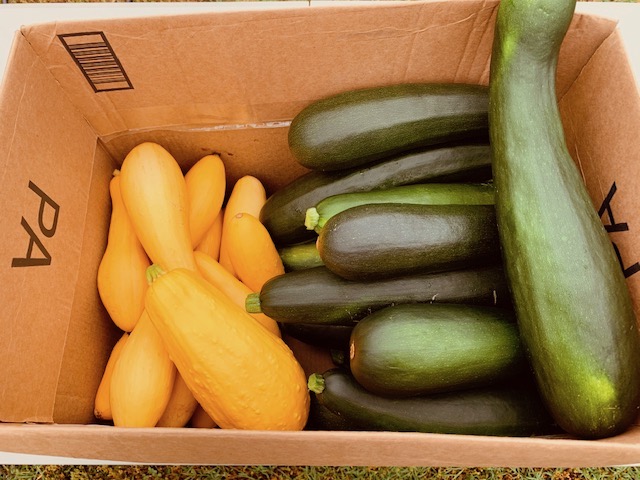