This ones my Daily commuter, A Specialized folder 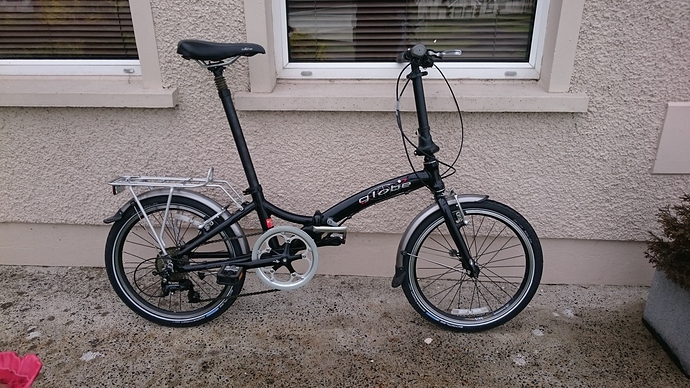 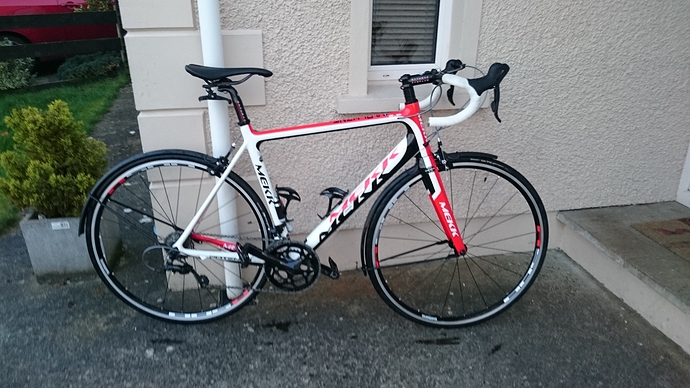 And this Baby is my Dream Machine - ROSE XEON RS3000. I imported it from Germany. Its an all Alloy frame with carbon seatpost & saddle, Carbon stem, Carbon Bars, Ultegra 6800 Groupset with upgraded Q-Ring chainset. All bearings are Ceramic (i know!! I did it just cos I wanted too, not for the gains, or lack there off) Wheel-set is Fast Forward Tubulars. Pedals are TIME full carbons. The Whole bike including pedals weighs in at 6.9 kilo’s 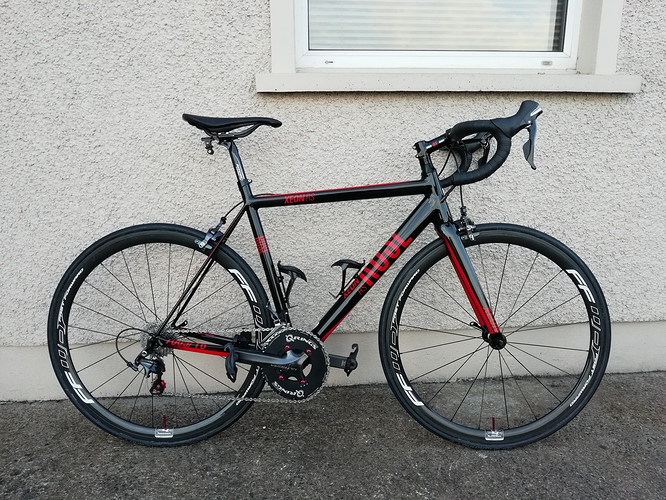 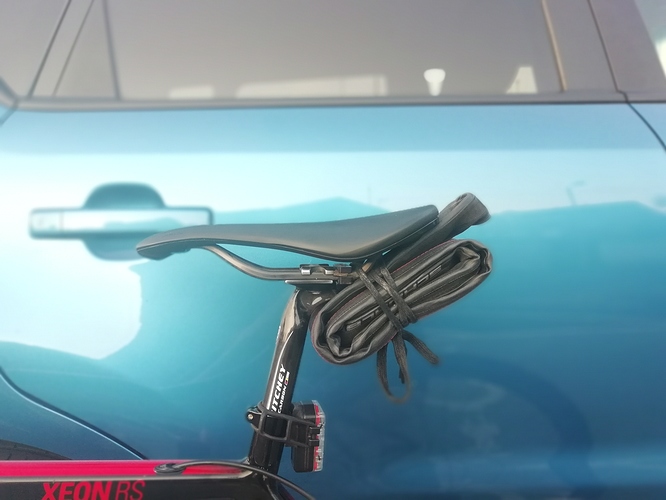 Some very nice bikes here, great to see a few fatties too! I have a few MTBs, my current favourite is my Nukeproof Mega, this was in the Sierra Nevada mountains, southern Spain in May. Amazing place to ride. 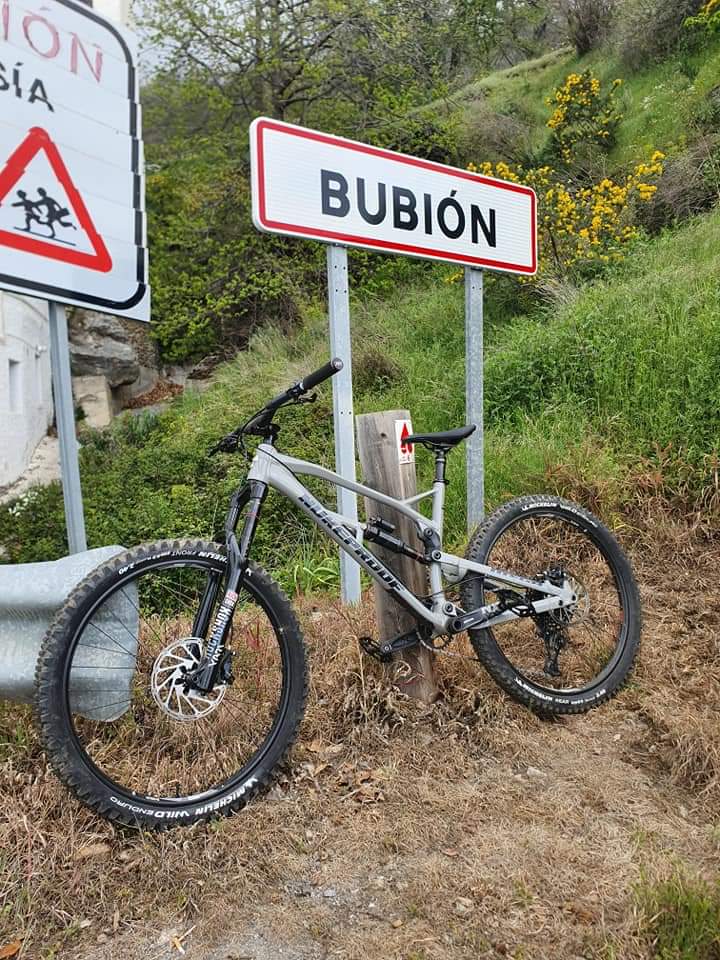 A Schwinn leaning tricycle made in Japan about 1970. Because it leans into turns the width between the rear wheels is narrow enough to easily fit through doors and gates without compromising stability. 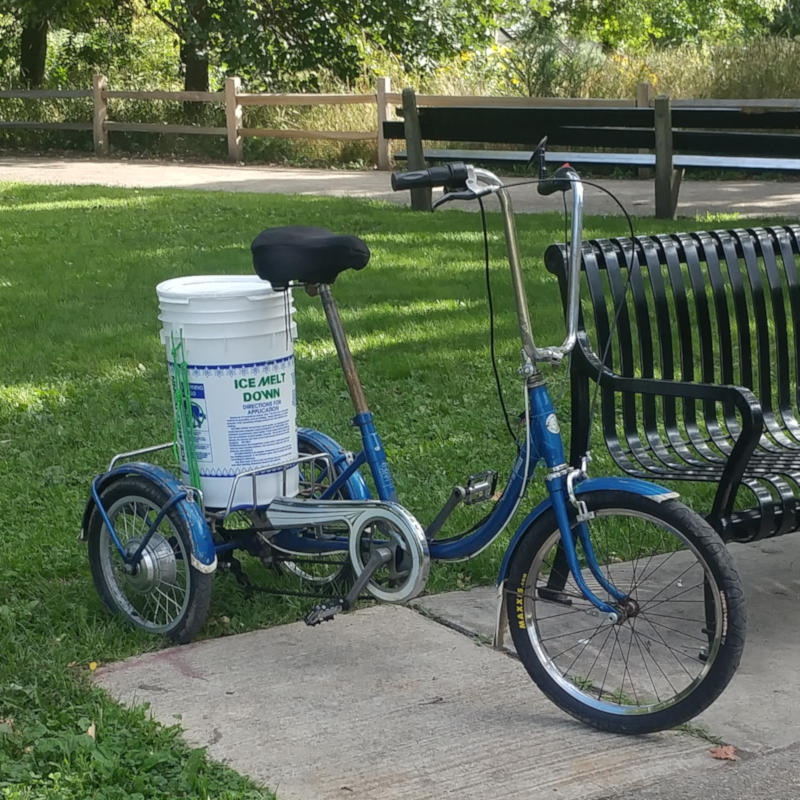 Just got a new hardtail, this is my ‘kid with a new bike’ pic the day I picked it up. I live in rural Australia with crappitty roads, so even when road riding, you want to be on a mountain bike! 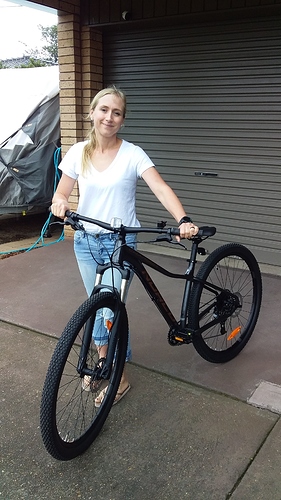 The cannondale was my main bike, N+1 is the trek 5500, the trek is my favorite bike to ride 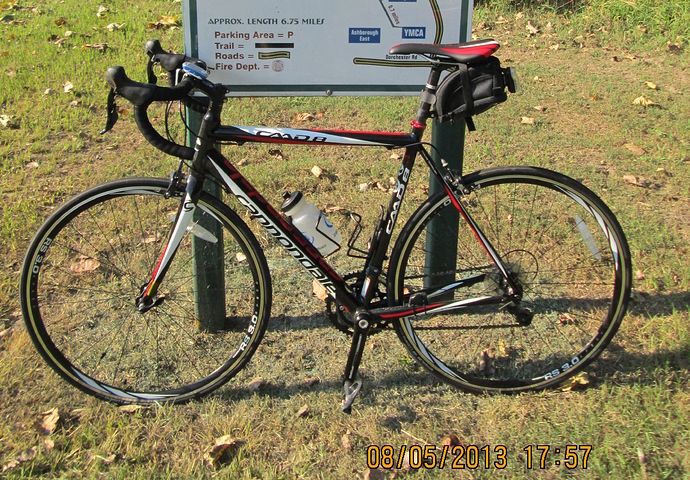 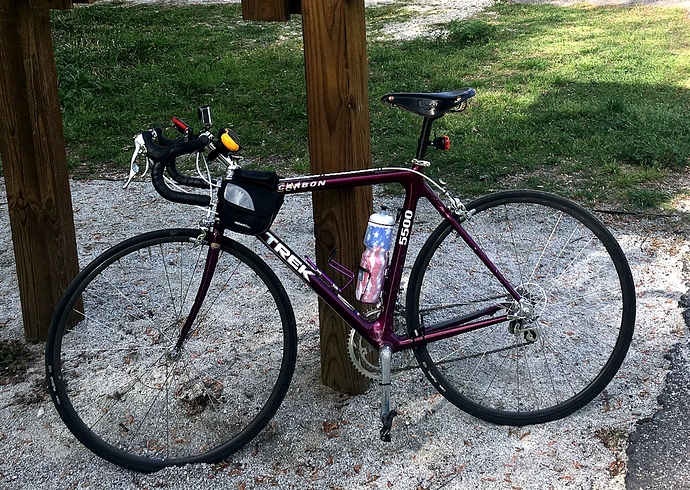 They really are great bikes.

I just realized I’ve never contributed to this gallery. So here’s me on mine. Not recent, but I’ll have a more recent photo soon. I’ve since added a chain management system moved the motor to the cranks and modded the seat struts. 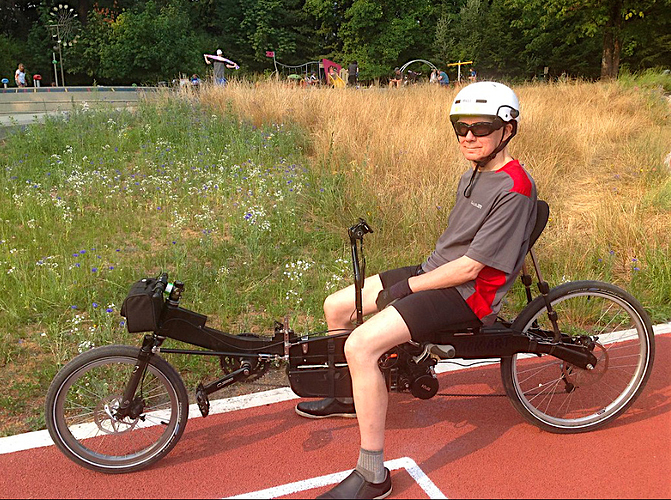 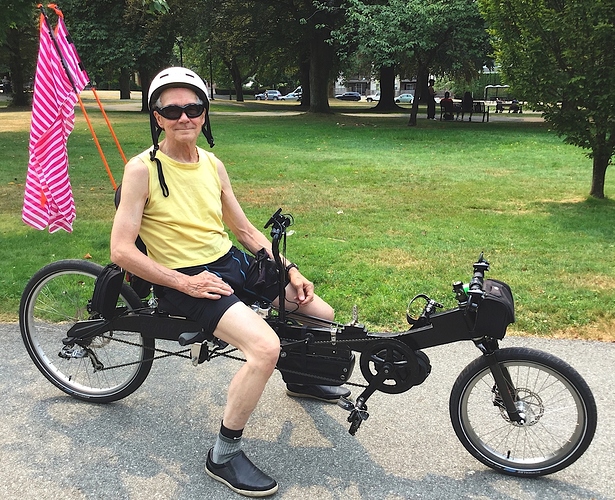 wondering, is that an electric assist on your vehicle? just curious on that.

Yes, a Bafang 8Fun 48v/750w. The battery is a Luna/Panasonic. I can select 3 levels of assist from virtually zero assist to like having an invisible/weightless Arnold Schwarzenegger peddling behind me. I originally mounted the motor under the seat (see above photo) behind the battery. That resulted in chain line issues, so I eventually remounted it on the cranks. Doing so introduced a different issue, an overly long chain that could not be tensioned properly. Too little tension meant too much slack and every time the motor kicked in/out the force caused the bike to ‘jerk’ to the right. So I then added a Brompton chain tension device. That didn’t solve the problem completely but enough so.

Overall, I am a happy camper. I designed and built this bike for two main goals: to go fast in comfort. It does both quite well. I built it originally as peddle only with a Schlumpf High Speed Drive at the cranks and a Dual Drive at the rear wheel (9 on the cassette and 3 in the hub). I rode it peddle-only for a few years then added the motor. The Dual Drive is still on the rear wheel, but the Schlumpf had to go to make room for the Bafang. I don’t ‘ride the motor’ like many folks do. If I wanted a motorcycle I would buy one (a Triumph 650 or an old Norton). But the motor enables me to ride faster (I like riding fast!), farther and longer than peddle only. So I ride more and get more exercise doing so.

ok cool, you bought the electric assist separate and added it to your bike, and ‘you built’ the thing mostly right? more power to you

I don’t like being low. Or low slung in pedaling. 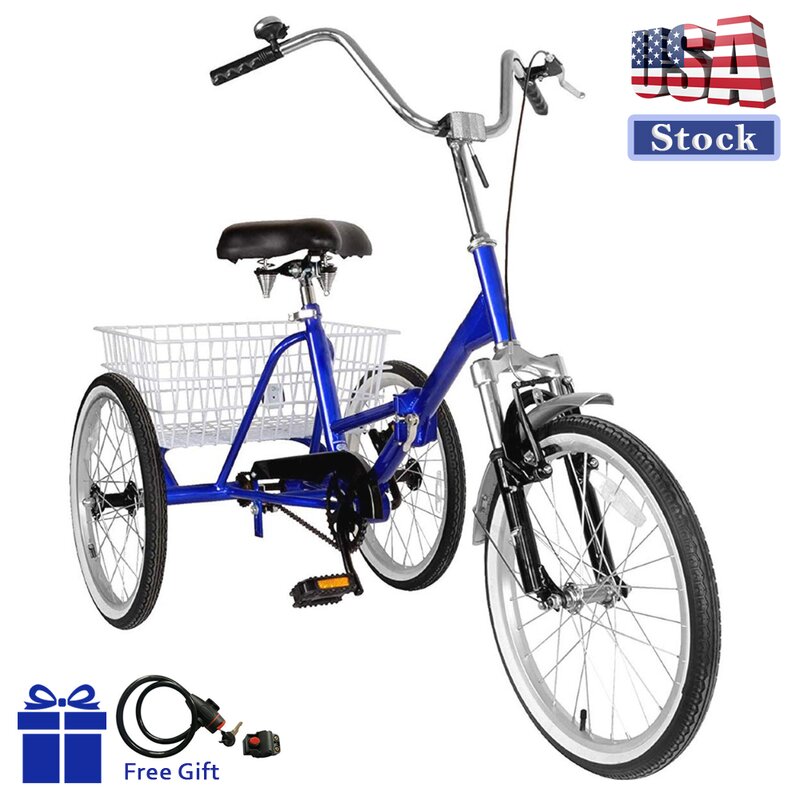 It folds…the front 1/2 folds up to be more compact, it would be put inside my RV toyhauler to travel with me and I would also add an electric assist onto it for ‘what ifs’ and I am truly one who likes more of a ‘down pedal’ action cause I like sitting taller and straight vs. being more slung and back but the beauty of it all…omg the amt. of options out there are insane when it comes truly to ‘a bike’ or trike’ or whatever vehicle you want to check out.

Been doing alot of research before buying, need that good fit for me and how I need it to travel with me.

Happy to see big flags flying on the back in your picture and I always love the flashing light on back also…every bit of safety to be seen for sure.

I built the bike entirely from my design. The frame is 75 laminations of Finnish birch plywood, sheathed in several layers of carbon fibre. The dropouts are solid carbon fibre with a layer of glass on the wheel sides. The hardware is a mix of bike and boat hardware and components. I had a local bike shop build the wheel set to my specs and install the chain and cabling.

You made the frame, complete with carbon fiber?

Handlebars under the seat. You see the right bar end just under my right leg where my shorts end. Yes, I did all the frame building, using my kitchen vacuum bagger and rolls of bags.

My next project is a suspended recumbent. I won’t bother building a frame. I already have a Linear Mach II frame and an Iron Horse rear triangle. I’ll combine those with a suspended front fork.

Extra super cool points for designing and building it yourself! The birch plywood is a bit of a surprise; I’d think the carbon fiber could be enough, although more layers might be required. Since a plywood satellite is in the final stages of test before launch, and it’s built of birch plywood, it might be time for a plywood renaissance!

I’ve built some composite stuff, like a fiberglass and foam telescope tube, and now have a pretty complete home machine shop. I built a couple of wheels long enough ago that I’d have to start over again to do it. Building a bike frame is a specialty in itself, at least for the conventional diamond frame bikes. You need to build a really good fixture to hold things in place while you work and your final alignment won’t be any better than the fixture.

I’ve been casually looking at what goes into building an e-bike from an existing frame, but haven’t taken any steps yet. A friend I see now and then has a two or three e-bikes. All are Trek (well, including a company Trek bought). He swears by them. His only gripe is that they’re all around 60 pounds, and he has to ride them with some level of assist on.

This was the initial inspiration for Black Art. I actually bought the building plans! 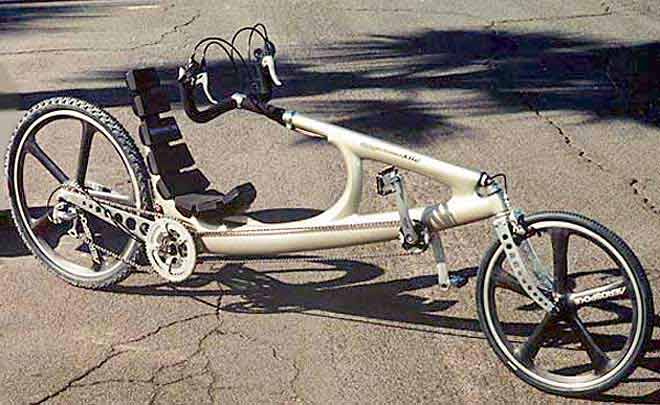 However, upon further consideration at the time I decided against attempting to build it because I was not confident of my abilities with carbon fiber (this frame is carbon with foam core) and I did not like the seat and handlebar geometry. The steering of the front fork is by a universal joint and I subsequently determined that it failed and/or got real sloppy fast. In addition, most of the hardware would have to be custom machined and that did not appeal to me at all. So, it remained an idea machine…

@CFLBob I built a sailboat many years ago using 1/8" plywood cut into 2" wide strips then covered with polypropylene fabric saturated in epoxy. The hull was beautifully shaped with multiple-curved lines. That boat sailed! I’ve worked with wood all my life, so I am very confident with wood. I used Finnish birch ply because I researched the topic and that is supposedly the strongest plywood. Also, it’s just plain beautiful stuff to work with. If I were to do it again, however, I would build the frame differently. I hollowed out the frame in three large sections to make it lighter. Although the hollows make it a bit lighter not lighter enough to compensate for the increased flexibility. I would gladly add the pound or so of weight back to get increased stiffness. Finally, recumbents lend themselves more to homebuilt than diamond frame bikes. There’s really not much you can do with diamond frame bike design that isn’t already built by someone somewhere. Recumbents on the other hand are infinitely variable.

This is the closest ‘store-bought’ recumbent to what I want in a bike. I had a chance to buy one of these a few years before I built Black Art but passed on it because I didn’t think I was ready for underseat steering. Ha! Ha! 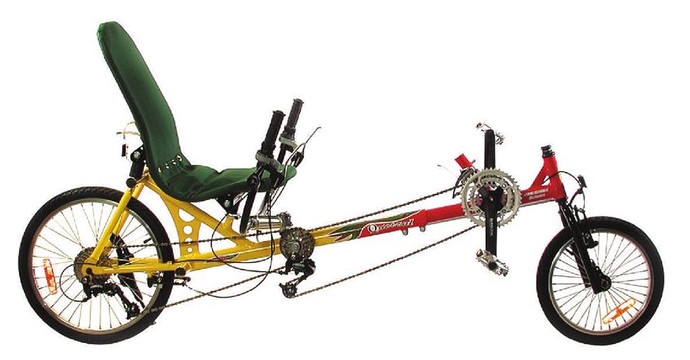 I eventually ended up buying a used Linear Mach 2 as my first recumbent. I had intended it as a bike for my wife but she never wanted to get near it. So I rode it for a couple of years even though it was too small for me and got accustomed to underseat steering enough to like it! The one I bought was all black. 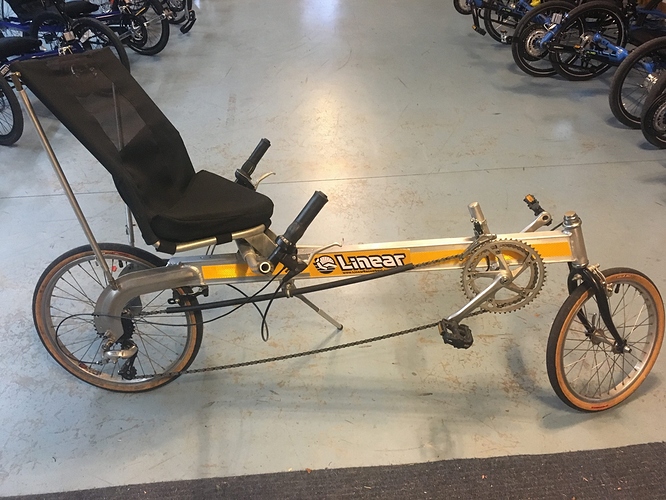 I bought the wife this bike, which she rode occasionally for a couple years and hasn’t gone near for several years more and likely will never ride again: 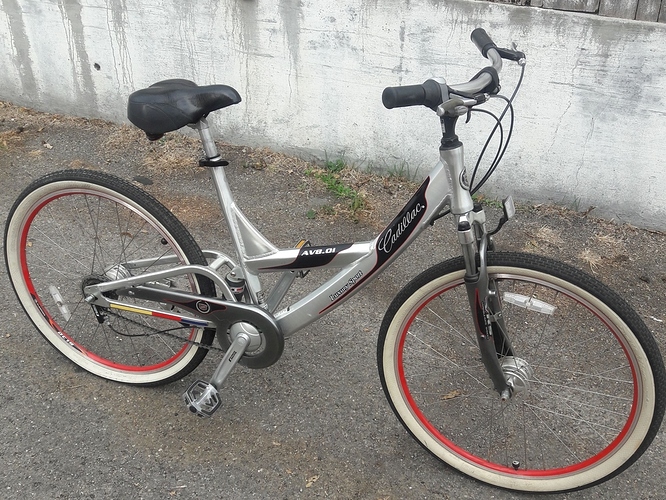 I was momentarily temped to use the rear wheel in my suspended recumbent. It has a Sturmey Archer 8 speed hub gear which is what I’d like to use. It also has a drum brake and no mounting holes for a disk. So that kinda makes it unusable for me.

Very, cool Michael. Your Linear bike, with the “frame” essentially being an I-beam, is much like the only 'bent I ever test drove, a Bike E. The big difference is the bike E had steering in front and a bit elevated (so your legs and feet would fit under it). That test ride would have been in the late '90s.

My wife and I used to ride together almost every day, like 5 or 6 days a week. I won’t bore with details of different bikes and all, but we rode continuously from '94 for almost 20 years. Nights after work, weekends, centuries every October, you name it. We got hit by a pickup truck the day before New Year’s Eve of 2000 and she needed massive surgery and a long recovery, but got back on the bikes on Easter Sunday a few months later (good day for a resurrection). Sometime around 10 or 11 years later, we both kind of lost interest or got too bored with the same old rides and just tapered off to quitting.

Around the end of August three years ago, I suddenly started to want to go riding again. I ignored it for most of the month. Since it was August and an aluminum bike can melt out from under you, I started riding on my Magneto trainer under the air conditioning. I went back to riding outdoors in October and have been doing every other day rides since then. She has remained riding our indoor recumbent with no real desire to go outdoors. There’s a picture of my titanium bike somewhere up this thread, probably from late’18.