Good thoughts @Anniegirl9.
I am eating a few eggs as the chooks are laying well but rather than frying them I am making frittatas with veggies in them.
Also using fish as a protein source rather than my normal fattier cuts of meat.
I also made some veggie soup today which is filling but less fatty
Hopefully this will start using up my own fat stores soon.

Normally I’d be suggesting the opposite, but that’s for people trying to get to fat adaption. I think I understand the idea of easing up a bit on fat once your well adapted and in a stall.

I’m confident I’m fat adapted now, but I’m still losing, albeit slowly. And I still have occasional issues with hunger. Like this morning for instance. After weeks of skipping breakfast with no problems, all the sudden bam! My stomach is yelling “feed me.” So I am obliging.

I don’t think it would be prudent at this point for someone like me to consider lowering fat. I’d like to work towards increasing fasting periods, so fat is my friend.

But I can see why others may find it viable.

I’m sorry, I missed your statement about
being anorexic. Fasting may not work for you. When I started, I did roughly one meal a week (OMAW). The weight came off faster than my metabolism healed. So now I eat based on my BG. When my morning (fasted) BG is above 85 I don’t eat and fast until it drops below 70. I expect over time, as my insulin sensitivity improves, my body will be able to “process” meals faster, and my fasting intervals will decrease. This strategy may not be appropriate for you either.

What the body is responding to by altering BMR is energy levels, not calories.

Isn’t a calorie a measure of energy? (The SI equivalent is in joules, which is definitely an energy measurement.)

I have been trying to figure this out for over a year. I’d love to hear a podcast on this. 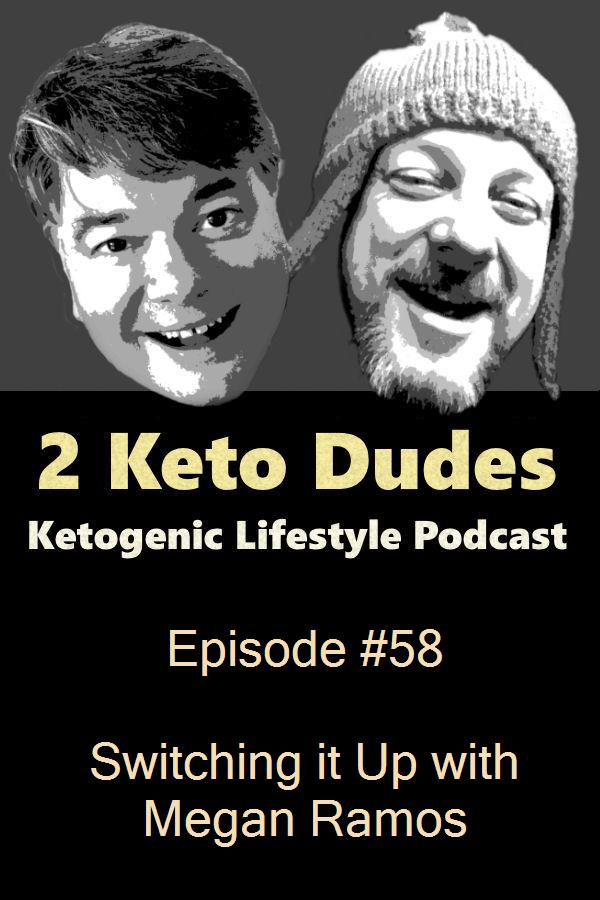 2 Keto Dudes - Episode #58 - Switching it Up with Megan Ramos

2 Keto Dudes - Episode #58 - Switching it Up with Megan Ramos

In regards to all the talk about cutting dietary fat, along with my links above where people lost weight with TONS of dietary fat intake, I give you Carl’s stall topic. Honestly all the ways the body will find to waste excess ketones is probably limitless. From twitching in your sleep, fidgeting, wanting to exercise, peeing more, smiling, thinking, even down to the smallest things like blinking. Extra ketones produced from fat don’t just hang around long term and, with low insulin, they don’t just keep going into fat and being pulled out in some endless circle. More ketones can also circulate safely than glucose molecules.

Isn’t a calorie a measure of energy? (The SI equivalent is in joules, which is definitely an energy measurement.)

Hello @PaulL
yes, on the face of it you are totally correct.
I have been trying to find the reference for my statement, which I heard Dr Jason Fung talk about on a couple of days ago, but cant
He explained the whole concept so eloquently and made a great point about “calories” not being measured specifically, where the body has many other ways and means of measuring essential macro and micro nutrients.
Sorry. Cant find it. Will keep looking.
It is a small semantic point anyway so probably time to go cook some bacon

UPDATE!!! I just wanted to update everyone. I have been doing a few things different. The first is that I have been eating a LOT more vegetables such as asparagus, black olives, romaine (salads), cherry tomatoes, mushrooms, broccoli, and cabbage. I eat veggies with every meal, and I don’t even count them as carbs- I know, not very keto of me. My main motivation for eating more veggies is because I want to eat more nutrients- and I am a veggie fiend.

I’ve been focusing on eating fat since starting keto, and that has translated to eating plenty of chicken and dairy. I have noticed my stomach has been more acidic since I started and has led to ulcers which I am prone to since the ED. I have cut out dairy (almost) completely, only having the littlest bit of cheese very rarely- not every day. I cook with olive oil.

I also have been eating more at each meal. Probably double what I was eating before. And guess what!!! I HAVE LOST 4 POUNDS!!! I am overjoyed as this is the first progress I have seen! I don’t think it’s water weight, because I am on my ‘dot’ and am bloated from that. I can actually notice that my jeans are loose on me!!! I am in shock with the change in such a short amount of time.

Since my progress, I found a long lost link on Pinterest about how a female lost 50 pounds on keto. She specified that she made sure to eat veggies at every meal and that caused her to finally shed pounds like crazy. This may not have documentation to support that claim as far as I can find, but I believe that is how I’ve actually lost. Since starting keto I have tried many different things: I have been off and on dairy- no progress. I have eaten little and eaten a lot- no progress. I have tried IF (hated it)- no progress. Now that I’ve tried eating lots of veggies? PROGRESS!!! And I feel so great!

I 100% firmly believe I am still in keto. In fact, I feel more in keto now that I’m eating more veggies than before! I think the keto community is kind of hesitant about veggies due to carbs, but I think there’s a huge difference in gluten carbs vs veggie carbs. I think the fiber and nutrients are so crucial in veggies that when I wasn’t eating very much veggies at all, perhaps that was a form of ‘starvation mode’ and why I couldn’t lose any weight. Macros may matter, but nutrients do too!!! And I was taking supplements and vitamins, but we can only absorb so much from them. The veggies did the trick for me. I am overjoyed!

I think the keto community is kind of hesitant about veggies due to carbs, but I think there’s a huge difference in gluten carbs vs veggie carbs.

Depends on which part of the keto community. The parts I hang with, we’re pretty adamant that the ideal keto diet should be mainly meat and veggies. And of course coffee.

Glad you’ve found something that’s working for you! Self experimentation is the name of the game when your weight stalls. BTW, I’m almost exactly your weight and height, albeit 40 years older, and I still have a good 10 pounds to lose as well, so I don’t think your goal is too low.

Yep - especially those of us with fatty liver - if you’re not eating lots of healthy greens, you aren’t giving your liver the nutrients it needs to cleanse itself - and can actually make your fatty liver even worse with a high fat diet.

Despite my Dr being very happy with the reductions that have been made thus far.

Just curious, as I do not know my liver status and I’m experimenting with deep frying these days, did you find the same effect regardless of what oil/fat you were using?

In order to do so, I’d have to use different oils. (I actually haven’t had deep fried foods at home for over a decade). The oil in question was canola oil (which, as it turns out, isn’t as healthy as I thought it was, as it’s a bleached oil - all of which still contain hexane remnants).

Ideally, you want to use a cold pressed oil in your deep fryer…these tend to be a little pricey (which is one of the reasons that they’re seldom used). If you can find beef tallow, that could be a very inexpensive healthy alternative.

It’s actually sugar—sucrose and fructose—that stresses the liver and turns to fat. Fructose is metabolised by the same pathway the liver uses to handle ethanol, and when it overloads the liver it causes the same fatty liver disease, because of de novo lipogenesis.

It is advisable to avoid all seed oils because of what happens to their polyunsaturated fatty acids at frying temperature. Even olive oil should be avoided, despite the fact that it is mostly saturated and monounsaturated fats, because its smoke point isn’t high enough for frying.

The best fats for deep frying are talllow, lard, and coconut oil.

I’m struggling with my fat intake. I’ve tried a two day fat fast to get over the hump and that worked but I’ve crept back up to where I began. I admit I’m a bit impatient. I’ve been Keto since late February 2018, lost 20 pounds. I’m 5’1, about 158lbs. I’m eating around 1600 calories a day; aiming for 80% fat but averaging 70-75%.
@Anniegirl9, How do you "load up on fats? The only way I’ve been successful is to add an obscene amount of coconut oil and HWC to my coffee (almost too much for my taste) and a ton of butter on my chicken/steak/pork chop/etc.

Any recommendations are greatly appreciated.

Actually, the point is to eat fat to satiety, not necessarily to get a specific amount. But if you want or need to increase your fat intake, cook with butter, lard, tallow, and coconut oil. Buy fatty cuts of meat, leave the skin on the chicken, roast a duck or a goose or a pork picnic (shoulder). Eat organ meats. Liver is delicious when not overcooked. Oxtail makes a great soup/stew. Put high fat salad dressing on your greens. Eat full-fat cheese and yoghurt. Make a Fathead or Carl’s Head pizza. And so on.

You might find it helpful to buy a couple of keto cookbooks for some ideas.

Easiest way I get fat in is with mayo. That’s on top of picking fatier meats. Use it as a base for tarter sauces or dressings.

A handful of macadamia nuts is good too. Just 1/4 cup has over 200 calories and very high fat.

I’ve been using coconut oil, definitely pricy! But re-use in the fryer helps some. I still keep having to top it off.