Glad the forum is back on line, i missed you guys.
My numbers yesterday were great! I had a few fasts and a feast and some OMAD.
Weight 164.8 (down 2.3 lbs)
Glucose 5.0
Ketones 1.0
GKI 5.0
No mistakes at work. I am using Cronometer to track my food and exercise. Doing my walking every day (almost lol) and my Physiotherapy exercises.
Two more shifts and then vacation for 17 days! I get anxiety flying but I have a small supply of Lorazapam on hand just in case.

To throw in my two cents about intermittent fasting: If you’re doing 24 hours and imagine going longer is harder, you might be surprised. I always find the temptation to eat is greatest around the 20-24 hour mark (my last meal is always a slightly late dinner, so I go to bed around 24 hours fasted). The next morning at 36ish hours, both my spousal critter and I always marvel that we have almost no desire to eat. Only once I extended that to something like 43 or 44 hours (which time period included two 4+ mile runs and a short weight workout), and I was still not desperate for food. It’s bizarre!

We’ve fallen out of the habit again lately, but when we’re on IF, we do two x 36ish hours per week.

Exactly! Especially if you started fasting around dinner time when you hit dinner time again or do you have to do is make it into bed and a bunch of your fasting will happen while you’re asleep.

Hi! I’m new to the forum & I’ve been doing keto since June 1st. Started at 190lbs down to 170lbs & just recently started ADF (36 hour fast) Sunday this week. Today is my eating day after fasting all day yesterday. Feel pretty good so far. I plan on sticking to KETO on my eating days. My goal is to get to a healthy weight for my height, 145lbs. So glad I found this group

Welcome Isabel great to have you join us.
On a happy note… i woke up yesterday and I wasn’t feeling great so I figured it was a great time to try another go at at fast…i just finished my first 34 hour fast with the help of 2 mugs of bone broth.

Managed 110hr fast. This week…not so much! I was going to fast on Mon/Wed/Fri…Monday was too hard…Tuesday the supermarket delivery arrived…Wed was hard again! More doing 18/6 rather than full days fasting. So much of this is related to your mental resilience at the time of fasting (or trying to fast!). Hope everyone is having a good week. x

was going to fast on Mon/Wed/Fri…

we should call this “flexible fasting.” LOL My plans were similar and did not work out as planned either. I did a 72 hour fast over the weekend and have been doing 16:8 or 18:6 since then. Will probably do another 72 this weekend since I’m working again. I have meal all planned for when I get home Sunday night

Welcome Isabel! I have been out of the forum for a number of days. I’ve been watching my grandson, and not fasting. Time to refocus

Down 3lbs last week… averaging 2.5lbs a week at the moment (not in a straight line though!). ADF still working well, and I am feeling much better.

Never really hungry, although I think yesterday was the closest I’ve got for a long while. After an 8k jog/walk, no brekkie, and just suddenly felt like I needed something… cooked eggs. 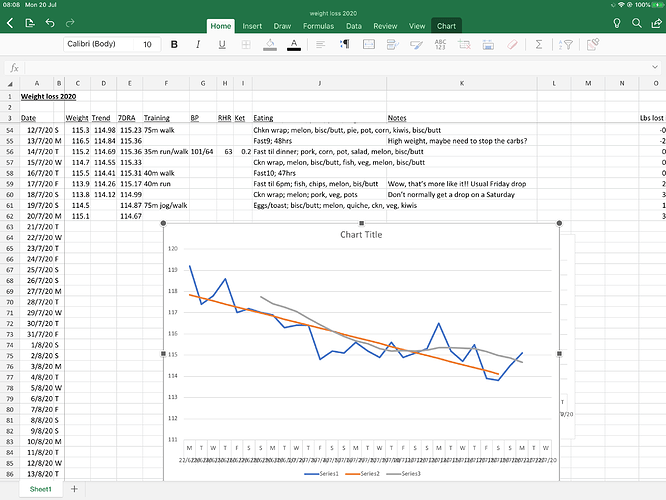 not in a straight line though!)

This is been my experience of ADF. It tends to be stairstep, but the trend is down.

I weighed in yesterday before I left for my trip.
161.5 down 3.3 lbs!
I had two 36 hour fasts this past week.
I am at my daughter’s for 10 days. No plans to stick to keto but she has an interest in it and made a lovely meal last night that was strictly keto, (except for the potatoes she made for my granddaughter.)
I had OMAD yesterday, I will try and stick to that.

2lbs down this week

Anyone else? I’ll add yours in. If you stayed the same or gained that’s OK. We’re just getting a group number. Do not feel like you are holding the group back. It’s just for fun!

stayed the same. I’m at the lowest I’ve been in a long time so I expect it to take a while to break through this. I’d still like to take off another 10-15 lbs.

Hey guys, I’m back from my 7 day “hike in the woods”, the foothills trail was amazing, no towns, no way to resupply food, had to carry everything on our back…but got to swim in waterfalls everyday! I took four of my kids and we had a blast, super hot. Started in Georgia, ventured into SC, NC and back into SC to end. Oconee State Park to Table Rock. I was convinced I had lost ten pounds but actually had GAINED!!! For the first time since November I had days on end of not watching carbs and actually inhaling them (for the hike and simple meals where you just add water), to me the only way I could have done it.
Looking at my Garmin App (Garmin scale)
my last weigh in before my trip was Monday July 13 at 138.4…
We started hiking July 14th
Came off of the trail and got home at midnight on July 20th.
On July 14 I weighed 143.7 (I weighed myself 4 times and the scale was consistent tho I don’t always trust my Garmin scale) So that was a GAIN of 5.3 lbs in 7 days after some pretty tough hiking!!!

So I’m going to attempt to ADF again, starting today…
I did weigh in today with two VERY different weights.
When I weigh on my Garmin I do so about four times to make sure the number is the same.
Three weigh ins put me at 137.2 and then that drop seemed so large I tried again and three weigh ins put me in at 142.9…thats a five pound difference, and when I weigh I get the same result three times in a row.

So we’ll see how this pans out…
Glad to be back, missed you guys!!!
N

welcome back, sounds like a great time. The waterfalls sound like a lot of fun. I bet the 5 lbs comes right off now that you’re home.

Again a wise person said would you rather look thinner and weigh more, or look fatter and weigh less. Between gained muscle, and possibly holding onto water because of the extra carbs my guess is those 5 pounds-ish are not permanent

An egg fast can be very effective Congratulations!