About the Zero Carb / Carnivore category

I did ZC in the summer of 2008. Broke my vegetarian diet with raw local ground beef. Actually, I was no longer vegetarian at that point, as I had started eating eggs, sardines, sockeye salmon.

Makes me want to return to ZC…after I eat the frozen asparagus and riced cauliflower that I recently bought.

We used to get canned oysters all the time in Port Townsend. Local and sooooo good!

What about multivitamins? Or magnesium supplements?

Eggs, Organ meats and seafood regularly, if you don’t want to take any supplements and want to optimize your nutrition. That said, there are plenty of longtime zero carbers who do just fine on meat and water.

Personally, I take a D3 supplement and Magnesium because I don’t get enough of either.

So I don’t need to worry if my Protein might be higher than my fat? With all the meat I am eating, they usually stay the same or my Protein is a bit higher. I take a calcium and magnesium, been doing that for years. I take a few others but they don’t really pertain to this lifestyle.

I am one week ZC today. Keto adapted since May. New to this forum. Interested in watching, learning and sharing ZC information with others as I explore this WOE. I was amazed when I entered my ZC food this week in to a tracker, that eating strictly from the animal kingdom magically calculates to perfect ketogenic macros. How simple! Trusting that I won’t have to perform that tedious task anymore.

I wish I could give this 10 likes.

Ah, great. I just came from about 3 months keto and it is drummed in my head that you have to have more fat than pro. I just wanted to double check. Thanks

You definitely should eat more fat than protein (by calorie)! Don’t get me wrong. But in all the long term ZC folks I know, this just falls out naturally. When I have measured I’m always at 65-85% fat by calorie. 65% is low by keto standards, but I think that’s fine.

I prefer cohaugs than oysters… I live in Atlantic Canada. My Dad was a fisherman at times in his life… so seafood is my prefered protein

I read about The Bear on Zero Carb Zen. Great read. Linking here. Hopefully that is ok.

Owsley Stanley, a.k.a. “The Bear,” best known for the sound system he created for The Grateful Dead and manufacturing a very high quality LSD, was a Zero Carb Carnivore for 50 years. He…

It’s nice to see your face, Daisy! Your dog is beautiful and so are you!

Me too, Nadine. I am from Nova Scotia and my dad was a fisherman. It’s hard to eat seafood when you move away. Living in Texas now and it’s just not as good.

The Bear is so great! I’ve been reading through his 137 page archive. Mind opening stuff!!

Thank you. What a lovely thing to say. She is one of 4! The others are big old lurchers and a deerhound.

you must read about the Bear

“The Bear” reports he got his knowledge from Vilhjalmur Stefansson.

At the end of the article is a link to the Bellevue Hospital Experiment report whose last conclusion is, “In these trained subjects, the clinical observations and laboratory studies gave no evidence that any ill effects had occurred from the prolonged use of the exclusive meat diet.”

“These months on fish were the beginning of several years during which I lived on an exclusive meat diet. For I count in fish when I speak of living on meat, using “meat” and “meat diet” more as a professor of anthropology than as the editor of a housekeeping magazine. The term in this article and in like scientific discussions refers to a diet from which all things of the vegetable kingdom are absent.”

“We divided up the caribou Eskimo style, so the dogs got organs and entrails, hams, shoulders, and tenderloin, while the invalids, and we hunters got heads, briskets, ribs, pelvis and the marrow from the bones.”

“The danger is that you may reason from this good health to a great longevity. But meat eaters do not appear to live long. So far as we can tell, the Eskimos, before the white men upset their physiological as well as their economic balance, lived on the average at least ten years less than we.”

“It may be that meat as a speeder-up of metabolism explains in part both that Eskimo women are sometimes grandmothers before the age of twenty-three, and that they usually seem as old at sixty as our women do at eighty.”

Today we often argue about quality versus quantity of life, especially in end-of-life contexts.

Perhaps the lack of salt in the diet could have impacted their longevity as a new study suggests and as reported by Dr Phinney at the Feb 2015 Cape Town LCHF Convention: 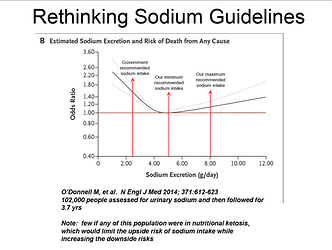 Here’s a youtube video of Dr Phinney talking about the new salt findings.

Hi Kelly! Sucks that you’re so far away

but you get to buy Kerrygold butter at least. None here. Are you from Cape Breton Bye?

Yes, Nadine. From Cheticamp. How about yourself?

Nice! Moncton, NB. My ex was from North Sydney. Love the Cabot Trail