We had it all wrong guys, and this article proves it!

Type of fat, not how much, linked to stroke risk, study finds

Fat in the diet has long been linked to stroke risk, but new research presented Monday suggests that it’s the type of fat, not the amount, that may be the more important factor.

I read this and decided I have to quite poisoning myself with animal fat. I only hope it’s not too late.

For those who don’t know me that well, I’m being facetious.

Another quote from the article:

“If everyone could make small modifications, such as reducing red and processed meat intake, the implication for public health will be huge,” said the study leader, Fenglei Wang, a postdoctoral research fellow at the Harvard T.H. Chan School of Public Health. Wang’s findings, which were presented Monday at the American Heart Association Scientific Sessions 2021, haven’t yet been published in a peer-reviewed journal.

Funny how this unpublished study is already making headlines. It’s like they’re subtly trying to convince us to stop eating red meat.

NBC has been terrible for a long time now.

You really gave me a scare! I was actually gonna read that article to see wha made you do a 180. Thanks for the sarcasm alert! Saved me reading! :LOL

It’s not peer reviewed, therefore pretty worthless at this stage. I did notice one para that was interesting…

“Our findings in conjunction with all other available evidence suggest that the Chinese population should be discouraged from following the continuing trend towards increasing dietary fat intake at
the expense of carbohydrate.” Doesn’t look like open and free choice there…IMHO
Is this then in reality a governmental driven initiative? I’m very untrusting of research from there, as there may be very singular influences for political etc reasons we are not aware of…?

I do not think this is the right representation of the article. The article does not argue keto is bad. On the contrary, it clearly states that SAD is bad.

What is argues is against carnivore. But there are many ways to do keto rather than carnivore.

And for example a Mediterranean keto would fit very well with this study.

This subforum is on “Science”, and me at least, I try to listen what Science says. And if Science says that red meat tends to be bad, I listen. Then, I can do whatever. For example, I will always eat (a bit of) red meat. But I will never argue that since this article goes against my ideological position, the article is “bad”.

I try to listen what Science says. And if Science says that red meat tends to be bad, I listen.

Unfortunately, there is no link to the presentation or the paper as far as I can tell. Therefore, we do not really know what the paper says. There is a good possibility that the study was once again an epidemiological study and biased since it came from the Harvard School of Public Health.

The other problem is US news sources are not the greatest is writing the full story about nutrition information. So what we see regurgitated in the news tends to not tell the whole story.

So, in conclusion, yes, we should carefully consider all sides of the dietary science, but there is a good possibility, this particular news report is not reporting on good science.

That perfectly may well be.

Having said that, the statement that “red meat is bad” occurs very often, from many scientific sources. For example, Valter Longo and David Sinclair explicitly say so.

Of course, science is not a religion, and authority does not matter. Only truth matters.

Having said that, if many good scientists, with good reputation in the field, all say that “red meat is bad”, one should at least wonder why they say so.

Personally, I like the approach of Valter Longo a lot, since he is for protection against wrong decisions. His book is based on 5 pillars. Only if the 5 pillars are supported, one can consider an action is good.

In the end, we will never know (at least, not until we have machines registering automatically what we eat at any time, after decades of taking such data).

But, at least me, I am wary of taking decisions that go against what scientists I admire state. I might go against their recommendations, but it should be for a very good reason.

Of course you did!

You do moderation of all that stuff and you got the best darn diet on the planet!

You will be so happy you followed that hypnotic light

NBC has been terrible for a long time now.

It’s Harvard’s school of epidemiology, and not NBC. If you go to Google News, you can see this is already everywhere: 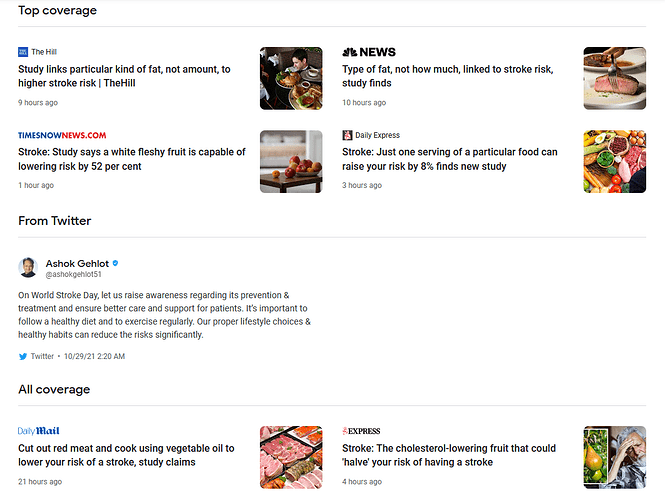 There is a good possibility that the study was once again an epidemiological study and biased since it came from the Harvard School of Public Health.

It uses the long-running Nurses studies. It’s crap-idemiology of the first order. It’s based on white people, for one. For two, it’s based on FFQs, which are not only terrible, but lead to things like virtue signaling (if you “know” red meat is “bad” and consider yourself “healthy”, you will say that you ate less red meat than you really did; meanwhile, the people who don’t give a crap will have the temerity to say they ate red meat).

I read this and decided I have to quite poisoning myself with animal fat. I only hope it’s not too late.

For those who don’t know me that well, I’m being facetious.

Having said that, the statement that “red meat is bad” occurs very often, from many scientific sources. For example, Valter Longo and David Sinclair explicitly say so.

Get them to document that assertion. I think you might be surprised how flimsy the research is, on which that assertion is usually based.

Dr. Georgia Ede did an analysis of the report the IARC, part of WHO, published a couple of years ago, and looked at every single paper they cited. It was a very interesting review, because half the studies cited did not even mention red meat, and a number of the studies used had serious methodological errors.

One point that is often made to “prove” that red meat is carcinogenic, is the nitrate and nitrite content of meat, but somehow omitting to take into consideration the fact that many plants that are considered healthy contain even more nitrates and nitrites per gram. But somehow, the same chemical is dangerous in one food and quite thoroughly safe in another. And of course, the data about the dangers of nitrates and nitrites is still quite tentative, and not very solid, at this point.

A lot of the antipathy towards meat dates back to the middle of the 19th century, when Ellen G. White, Prophetess and founder of the Seventh-Day Adventist Church, inveighed against meat, because she felt it incited “fleshly lusts.” The whole breakfast cereal industry was invented by her followers, the Kellogg brothers, as a means to get people to stop eating bacon and eggs (or meat) for breakfast.

It’s not peer reviewed, therefore pretty worthless at this stage…

Having said that, the statement that “red meat is bad” occurs very often, from many scientific sources. For example, Valter Longo and David Sinclair explicitly say so…

Having said that, if many good scientists, with good reputation in the field, all say that “red meat is bad”, one should at least wonder why they say so…

I am wary of taking decisions that go against what scientists I admire state.

If it were only so…

Ancel Keys was reputable, PUBLISHED and subject to intense peer review/scrutiny. We debate (finally) about just how intense the review/scrutiny of his peers. We are now after 50+ years beginning to recover from that PUBLISHED and peer reviewed data, cherry picked to support his premise. And all supported by reputable scientists - to this day! And 50 years into one of the greatest health disasters in recorded history. My bet is the final death toll due to Ancel Keys, the peer scrutiny and support from reputable scientists he received is an order of magnitude beyond the Black Death of the Middle Ages.

Sure, we want published data, REAL scrutiny and multiple replications of the results. We ought to get that BEFORE making massive societal changes, like those that occurred after Keys published. I think it might also be a good idea to be open to different ways to accomplish it. Unfortunately, peer review has become buddy review.

PS: Demonizing ‘red meat’ is nonsense. The human race became the dominant species on earth eating fat and mostly red meat for 3+ million years. If there was something wrong with it, we would not even be here discussing it.

follow the dollars everyone and we see massive patterns

I posted this in Jul 2019. All the included links still work. Anyone who thinks ‘peer review’ is useful, please check it out.

Remember debates pre-Google? It’s a bit like those of us who go by what our gut tells us (literally).

The link is to NBC. Not sure what possessed you to reply to me.

I try to listen what Science says. And if Science says that red meat tends to be bad, I listen.

The science is in! It’s the lack of pirates that is responsible for global warming.

Been saying this for years.