When does my self image catch up?

So, for those of you who have been here for a while, how long does it take for my brain to actually see me as I am now and not as I have been? Does that make sense?

Totally makes sense. For me (bearing in mind I still have a way to go - but enough now that everyone notices) its been gradual. Its all the little things adding up - clothes looser, changing the position of the car seat, noticing I’m not the biggest one in the room any more, being able to cross my legs, bend over (and get up!) etc. For a lifetime of obesity - not sure if it ever actually goes away. Hopefully the long timers and maintenance folks will chime in.

I have the same issue! I am pretty much in maintenance mode. Look better than I have in years yet I still don’t see a difference in my mind. Than again, I never saw myself as fat either even when I was overweight. I just see the same me. I’m not unhappy and I don’t obsess about it but I still feel like I am the “fluffy” girl. When does the brain catch up?

I’m not sure when/if it happens. I was a thin child, thin youth, thin 20 year old, thinish (130 lb) 30 year old. My self image is that I’m thin, and I’m shocked at pictures of me or I catch my reflection in a mirror.

I have been heavyish , and then fat for half my life,but my self image is that I’m not. Weird.

I do think self talk can help change your self image. Everyday look at yourself and say that " I weigh less, I’m getting strong, and healthy"

Supportive friends can help too. You ARE getting healthy and strong. You DO weigh less.

I’m glad you shared this as I’m working on this. I often feel and see myself as an obese man. I try on clothing with an “Oh my god” because I can’t believe the smaller sizes fit.

I really appreciate your responses. It’s nice to know I’m not the only one with “head games” going on over here.

I’m one of those people that has yo-yo’ed in weight a lot during life. The first time I lost about 50 or 60 lbs, it took a couple of years for me to not see myself as 60 pounds overweight.

I’m down about 50 again since as of a year ago after going keto and IF in '15, and I still see myself as having too much gut.

So, my brain, just as the scale and mirror, is lying to me.

Similar here. While I did have a bout of obesity in my late 20s, I managed to lose enough that I did not look like the heaviest person in the room. Then by 34 I was (honestly, usually the second heaviest person in the room!). However I also never had a fat self image, which is why what was in the mirror was startling sometimes. Now I have the opposite, while still not at goal, I am now merely overweight rather than obese. Still when I catch sight of myself in store windows I am startled that I am not as heavy as I used to be.

I think it depends when you became obese. If it was as a child there will always be a little bit of that image. If it was at 30 your psyche or whatever is formed and that is never going to be the image you have no matter what your weigh

So, my brain, just as the scale and mirror, is lying to me.

That is certainly true in my case. You are far from alone. Body image is a big issue for just about everyone who has been overweight. MyFitnessPal has tons of threads about it.

Certainly my case. All I see when I look in the mirror is the fat remaining in my middle. Trying to see who I am now is difficult. This might help… Started keto and fasting in March at 215 size 22, NOW 148 size 8/10. 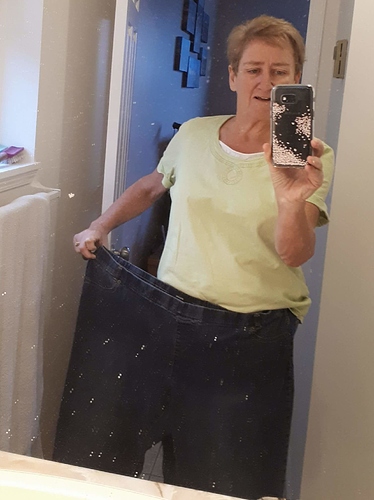 Wow! What an inspiration!

I said “Excuse me” to squeeze past some folks & when they both looked at me like I was wearing my shirt inside out I realized there was plenty of room for my current bum to go by them with room to spare. That’s when I realized my brain still thinks I’m large. It’s going to take a while, I think.

But also I didn’t really understand how large I was 16 years ago until I saw my wedding photos. I mean, I knew I wore a size 20 dress & I looked in the mirror every day. But something about seeing pictures gave my brain new information. So maybe take some pictures? That’s what I’ve been doing monthly.

Pictures certainly help! Also, oddly enough, mirrors in different locations, not just my own bathroom. And reflections. Hey, who’s that tall not-fat-at-all person walking towards me? Oh, it’s me!

I put a shot of me in much-smaller jeans on my phone lock screen. Evidence several times a day that I’m smaller is needed.

I walked along a very narrow bit of sidewalk (not really a sidewalk) on a bridge today. Have to walk carefully to not bump myself into the railing and then into traffic. Staying on it wasn’t a problem – but I’m 12 inches less in circumference. Made a difference!

The other thing is just to listen to others and trust them. When they say you look amazing, you have to ask yourself, “why would they lie?” They’re telling you the truth, and it’s up to you to believe them.

A book I’ve been reading called “The Brave Athlete” talks a lot about self-perception. If you label yourself as a “runner” you’re likely to live up to what you believe runners do: they’re fast, they’re resilient, they’re tough as all get out. Same thing here: you ARE a ketonian. You ARE healthy. You ARE adding years to your life. Now you get to go live those years in health and happiness.

Congratulations on your journey!

Just remembered an “ah ha” moment I had a couple of weeks ago. Was heading into our fav brunch restaurant and I saw the image of someone and thought " she looks great ". Then I realized that was me. Hubby looked like himself, so that image must be pretty right on, but I sure had a disconnect from it.

I was a thin child, normal teen (although do have vivid memories of my grandma and my thinner friends saying I am putting on weight, so definitely some psych scarring from that), 10 lbs over ideal weight in my 20s, 20 lbs over ideal in my 30s, and finally 30-40 lbs over ideal at 40.

I have been keto and fasting since September and lost just about 30 lbs, and I am now 24% body fat and BMI of 21.5 (I am a woman). Sometimes I catch my reflections in random mirrors and windows and go WOW, she is hot! Other times all I see is a fat belly and fat thighs and want to cry from frustration over a month-long plateau. I have 5-10 lbs more to go, and it’s making me want to cry. My husband and family says I need to stop obsessing and accept that I look awesome. They are concerned actually that my body image is becoming unhealthy.

They are concerned actually that my body image is becoming unhealthy.

I certainly hope that’s not the case. Meanwhile, congratulations on your success.

You are very lucky! I have been on keto for almost 2 yrs. Self image sucks. I see myself in pictures and still want to edit myself out. I figure gee 40# ago I must have looked HUGE! If anyone has any ideas for self image improvement please share.

For me, it was about 3-4 years before my mindset on me changed. I’ve been through this before, was real fat, self esteem was ok, but not were it should be, still ran and hid when camera’s came out etc. The last 4 yrs I’ve been chipping away at it, had quick losses, stalled out for almost a year, wound up trashing my metabolism, had a handful of things that weren’t too reassuring to my end goals. The plus was the whole time I was in the gym lifting, multiple programs in that time constantly working on just slapping on muscle both for the aesthetics, but also because more muscle mass equals a faster metabolism, which equals me getting more food

Toward the end of last year into the world going to hell this year I REALLY cranked up the effort, changed my diet pretty drastically (again) and took another ~10% bodyfat off. It was almost like a speed transformation and I FINALLY hit a point where a couple years in the gym could actually be seen without the fat on top, I see myself everyday and it still hit me by surprise. Granted we shouldn’t base as much as we do on stuff like this, but as a dude, when all of a sudden I see a chest, arms, round shoulders, the beginnings of visible abs etc… screw that, it makes you feel good! Then I started replacing my clothes for stuff that fit correctly and then it was a night and day difference, even to me.

I’m going to label myself as a complete douche on this one, but one of my biggest goals with all this (yes, health was a big one) but it was to do some anti-aging and not be an embarrassment to my kid, he’s turning 7 and I’m 40. In my area I’m an older father which kinda bothered me. Last couple months I’ve definitely noticed an uptick in inbound flirt coming from girls in the early 30’s and in some cases 20’s. I’d say I’ve pulled of not looking my age at this point! Plus, I’m a guy, we like that stuff

You’re GOING to hit your goal! But sometimes like me it takes years of what feels like 1 step forward 1 step back, but then it all catches up and it all retroactively becomes worth it! Keep going!

Here’s one thing I’d say though, At one point I had to remind myself of the definition of insanity, I kept doing the same thing over and over expecting a different result. Don’t do that! I refused to break “rules” handed down by the almighty Bible of Keto. I used to think calories didn’t matter, that held me back. I used to think eating more fat was always going to help, that held me back. I thought salt wouldn’t bloat me so I kept using the life out of it (I love salt) that held me back. I’d say if you’re not hitting your goals in a reasonable time frame start tracking everything you eat, look at it like it’s somebody else, and if somethings clearly not progressing you look at other mindsets. Many things I do now seemed insane to me a year ago!