I am so happy for you, Velvet, you are doing terrific. Congrats =)).

5 days of carnivore did the trick to break my stall. Good to know. I just had to hit that 100 mark asap, the 3 extra pounds are gravy. Let’s see if I am on a roll again, approximately 3 quarters to my goal now. I fully expect things to slow down now, and I am actually not that picky about the exact amount I weigh, I just want to feel good. Got in my car yesterday and my first thought was:“who drove my car and changed the seat position?” Haha, my belly is missing and I am sitting too far from the steering wheel to be comfortable.

Looks like the steak has a beautiful crust on it.

Dinner… More Crabs of course. Especially since the Wife and Son didn’t eat any. Well, the Wife did eat two earlier with me, but not tonight. Son ate other stuff?

… But I only did 1/2 dozen, since she also made some Zucchini Pizza Wedges and also a Hamburger for me. And I had a Grape Zevia. 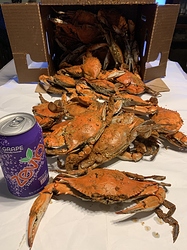 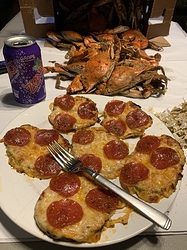 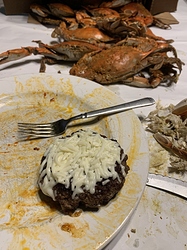 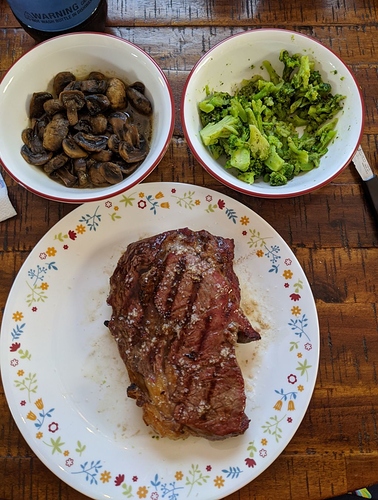 Feels good doesn’t it? I have lost about 193 lbs so far … and hoping to hit ONEderland in July. Fingers crossed!

I edited my original post as it wasn’t worded clearly. 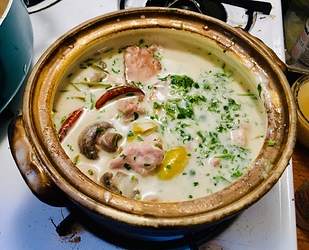 It feels wonderful, and congrats on your immense loss!

I managed to buy cream cheese (I chase this item since years and now I have found it) and made egg loaf muffins… I knew they will be way too fatty but they are worse than I imagined. They couldn’t even contain the lots of fat, at least not all of them and I felt bad after eating some. It’s not necessarily only their fault but I was very fine after my first carnivore course… They taste eggy, of course so that’s great, next time I simply will omit the added fat (or use very very little), that’s my normal attitude anyway.
They are somewhere between ugly and pretty in their deflated way but closer to pretty, look at those gorgeous colors!

Both bunches have a muffin containing about 0.5g bamboo fiber as well to try that out. The first one has cinnamon, vanilla and clove (my kitchen smelled nicely), the second bunch is salty and it was made with lard instead of butter.
So I have no regrets, I merely never will try making too fatty stuff, I usually skip or reduce the fat in recipes when I see they are unnecessarily. But I had to try it once and I don’t turn on the oven for just a few… I used 3 eggs. 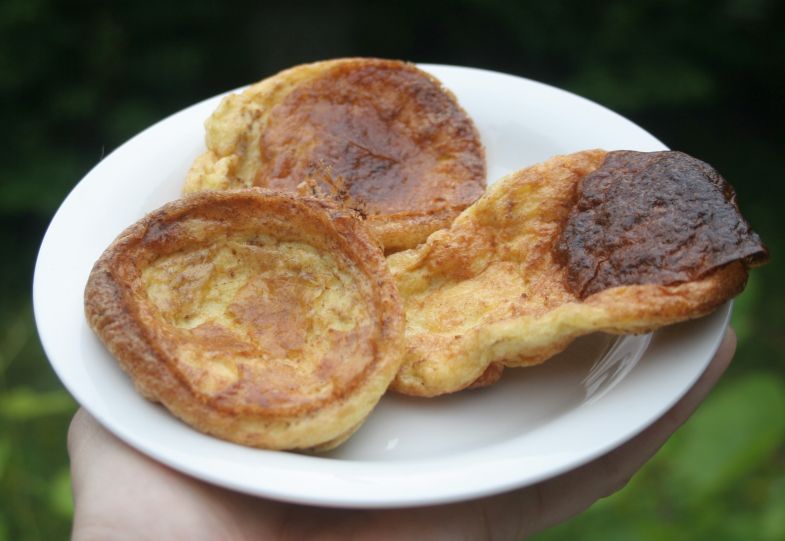 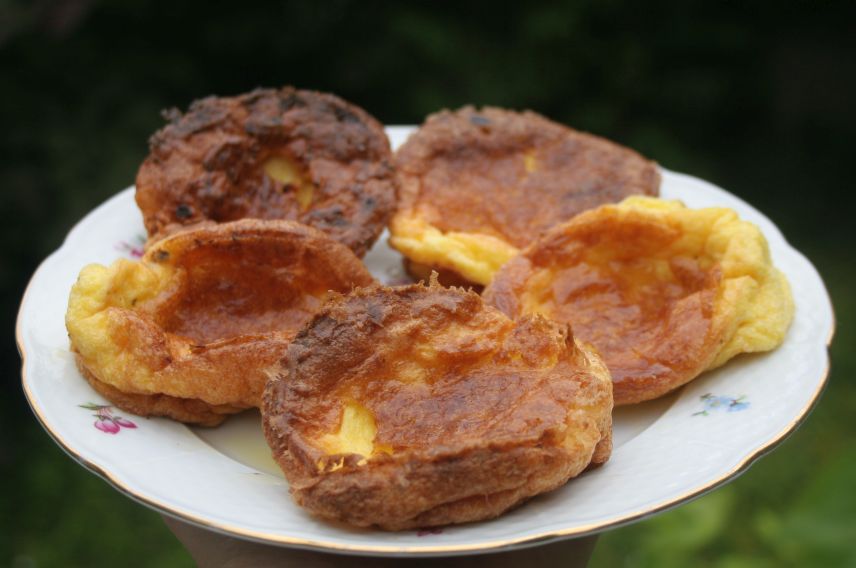 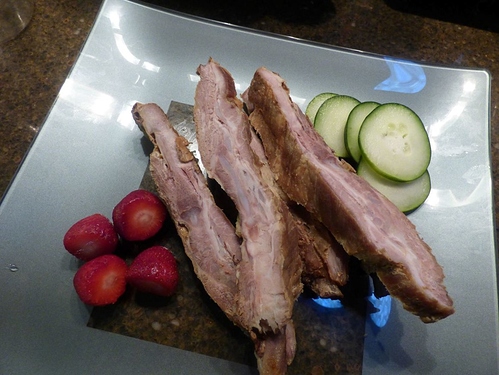 It was hot yesterday, and I was too lazy to cook. So I had some cold ribs, strawberries and cucumbers. I like hot ribs better, I like the scent. But, cold is good too.

Exactly my opinion - just not the scent, it’s the feeling of the fat for me.

But as it turned out, egg loaf is GREAT cold, I just should avoid it while warm… Sometimes such things happen too. And it’s way, way better with lard than with butter and cinnamon and whatnot. I will make some more versions soon… 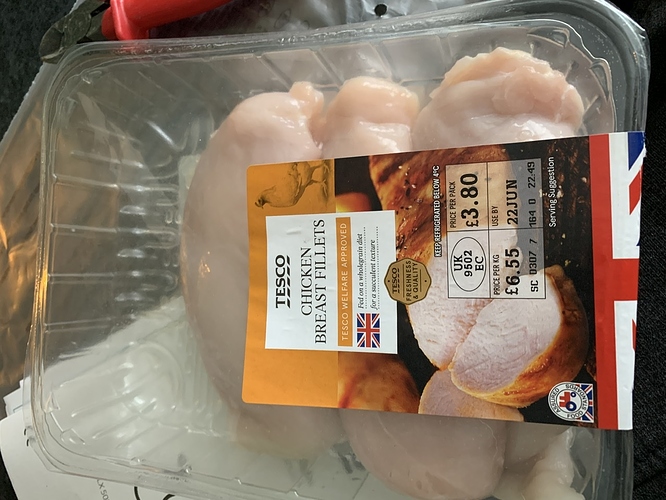 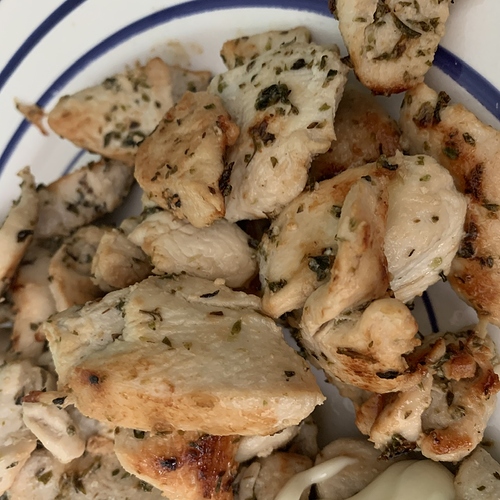 Fridge was dying, repair man came out said it was just the thermostat stuck open and claimed to have fixed it. If I had been there I would’ve told him that wasn’t right as he told Richard the way to reset it was to turn the fridge off and on again, but I had done that several times to defrost it when it iced up so knew that wasn’t the answer. Obviously it needed more work, I got the thermostat and he was meant to come back and fit it but failed to show up then stopped answering his phone… so yesterday morning I fitted it myself, guided by YouTube, and was ecstatic when it turned back on afterwards

But, it still wasn’t getting to temperature and this morning was at the same temperature as the old thermostat had been running at, so likely the compressor, not something worth doing for a twenty year old fridge. Decided a new one was needed.

But, it was a built in fridge and I couldn’t find another one that would fit the gap it was in and didn’t want to have to pay out for additional work so decided to replace with an under counter fridge instead. Found one that would fit my kitchen and my budget and decided to buy it. Went through the checkout successfully twice only to have their site crash both times so gave up and went elsewhere.

Found a much better one for the same price so ordered it, available to collect today.

Got it home, unboxed it, all good so far. Four hours to wait before it can be turned on, OK. Decided to clear the gap for it…

The old one had been there twenty years and was welded in place so absolute b*tch to get out. Had to smash the legs off with a hammer as they wouldn’t move, saw through the kickboard under the cupboards, cleaned out the gap, and tried to fit the plug through the gap in the cupboard that the last plug had gone through, but I had cut the wire on the last one to remove it so only then realised the kitchen had been built around the old one… Realised I had to cut a hole in the side of the cupboard to get the plug through.

Drill batteries were flat, had to charge them… hadn’t eaten anything yet and it was about 2pm (normally only eat until 12pm latest). Richard offered to get me something from the local shop which I normally would refuse, he had suggested “chicken or something” so I accepted thinking it would be cooked already… but he came back with these, no use at all with the kitchen in pieces and I was stressed and hungry and not in a good mood at all, but couldn’t do anything until my drill was charged so cut these up scissors (couldn’t get to the knives or chopping board) and fried the pieces in ghee with salt and dried oregano, kept them cooking until all the ghee had soaked into them and ate with mayo. Way too much protein I know, I get a strange itchy / tingly feeling when I have too much, but I was hungry and stressed and they fixed that.

Ten mins after I had eaten, drill was charged and I could drill the holes, then use the jigsaw to cut out the hole and get the fridge in place.

Another 25 mins and I can switch it on…

Well it’s an extreme rarity these days that I eat anything before Noon or so. But honestly, I have things to do and so I pulled out the Crabs around 9am to get an early start. The Wife and Son did a meat run while I ate and picked up some more Top Sirloin, NY Strip Steak and Filet Magnon. As well as Country Sausage some Knockwurst, etc. My Son also picked up the bill this time for Father’s Day. So looks like some Vacuum Sealing, trimming, etc. has now been added to those things for me today. 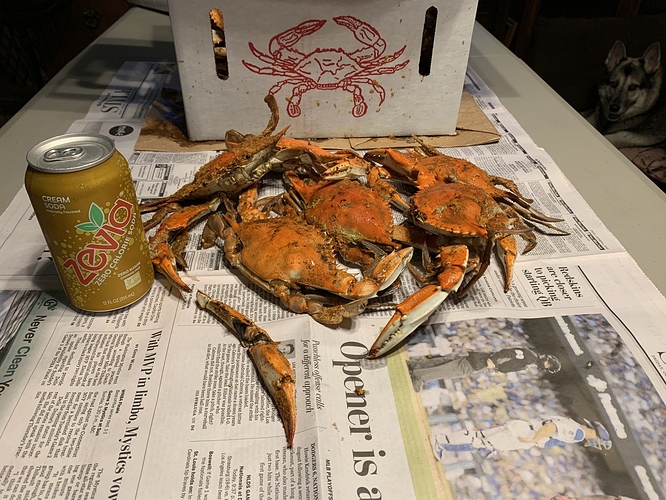 Of course, both Girls love Crabs or Seafood in general. But Shelby has always had an extreme liking for it. Be it Crabs, Shrimp, Scallops, whatever. She’s never too far away and doesn’t mind letting you know just how much she loves to join in on some.

She comes and sites beside me while I eat. 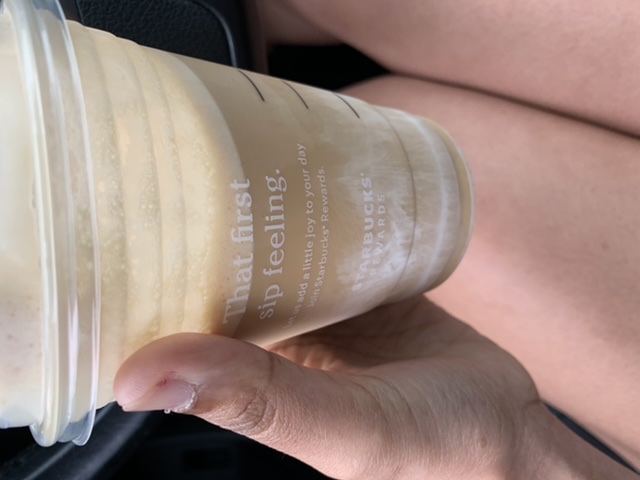 Update… While trimming the Silver Skin off the Filet Mignon for Vacuum Sealing, I took the small scraps that were left and tossed them in a frying pan. Wasn’t much there, so added a small end piece from the Demonico Steaks. (Wife and Son had to run to the store, being we’re a little low on Vacuum Bags.) 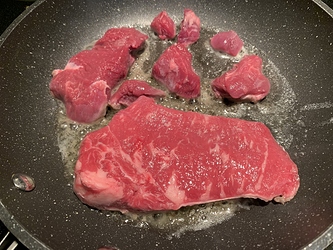 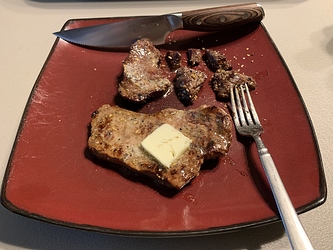 10 (1") Filet Mignon… Trimmings on the bottom right is what I fried up earlier. 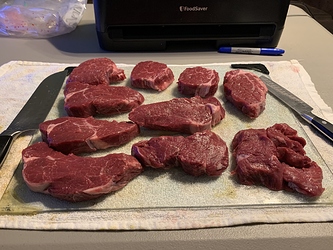 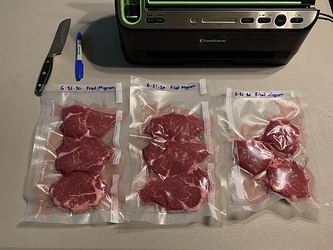 18 (1") NY Strips… When I started marking these, I must have had Delmonico’s on my mind.

Had to go back and remark about half of them when I realized. I also had one earlier with the Filet Mignon. 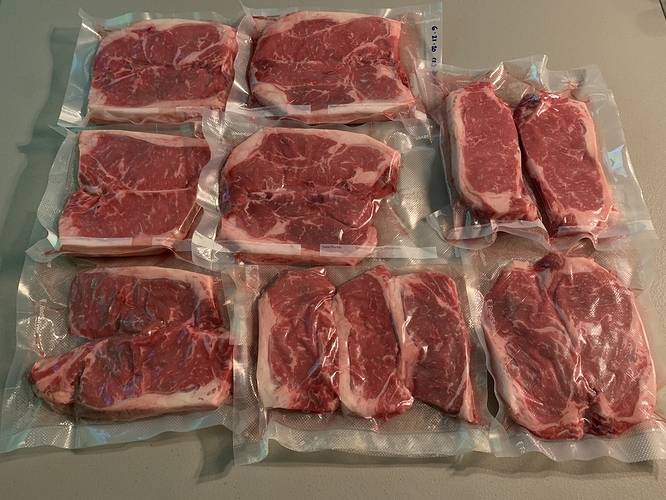 6 (1-1/4 to 1-1/2") Delmonico’s. I actually haven’t purchased these in a while since I hadn’t seen them in the store. But one really caught my eye and went right into a warm bath for later tonight. 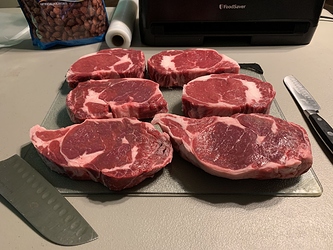 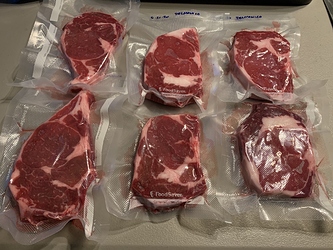 6 or 7 large 1" Top Sirloins that I cut down to various sizes… I usually keep them whole, or cut in 2’s or 3’s, but I decided to cut some smaller cuts this time for nights I may not want one too big. 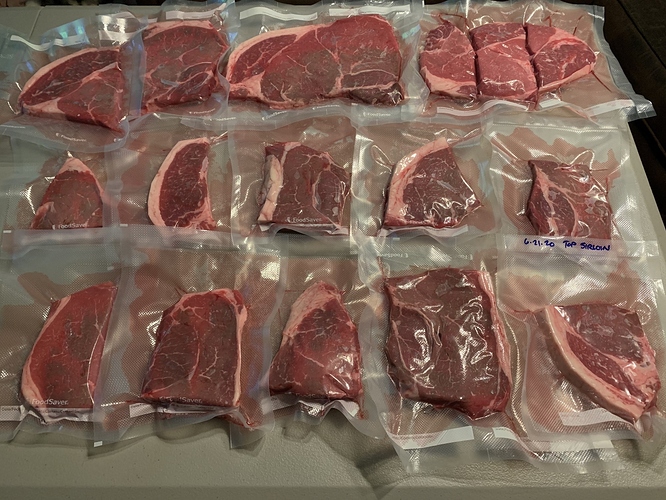 Finally, I packaged up the 5 lbs. of Country Sausage. Packaged up 3 (1 lb.) bags, and left the remaining 2 lbs. to be used tomorrow to make some Zucchini Boats. 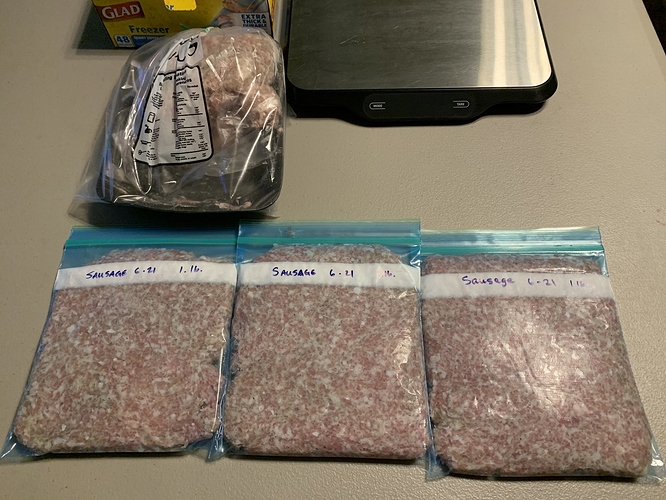 The knockwurst were already packaged in 4’s, so didn’t need to Vacuum Seal them. 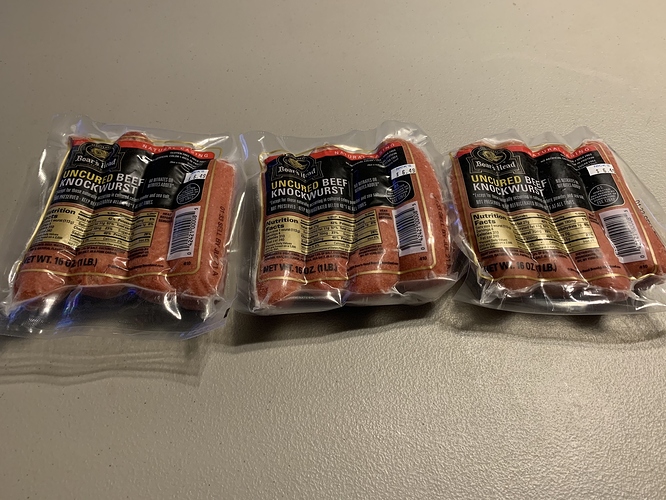 Wow Dave, I’m jealous of all that meat! You’re making me hungry. 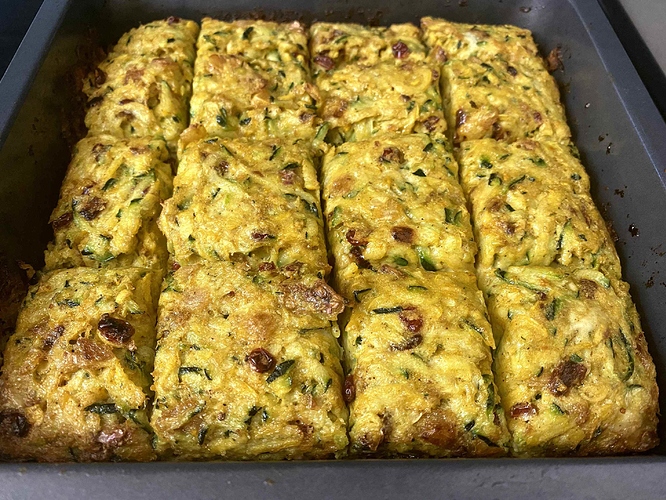 I later had a “garbage salad” to use up a bunch of leftovers in my fridge that were about to spoil, including strawberries, pickled red onions, cherry tomatoes, and roasted pecans. 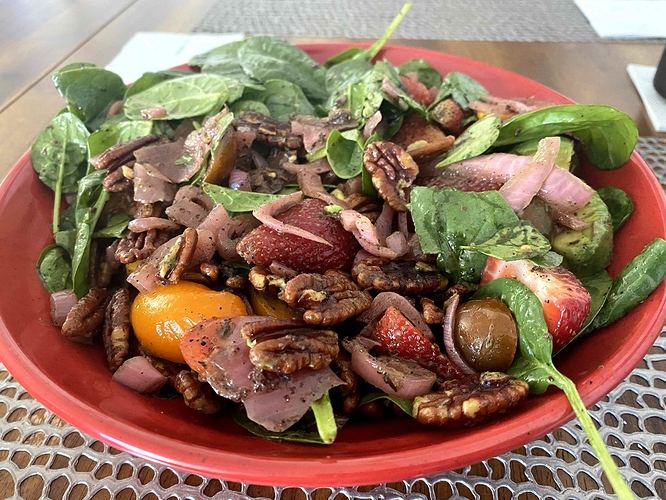