I had goat for 3 days… I put the carnivore ones into Fangs’ thread and the soup wasn’t so pretty but this is what I ate yesterday, among others: 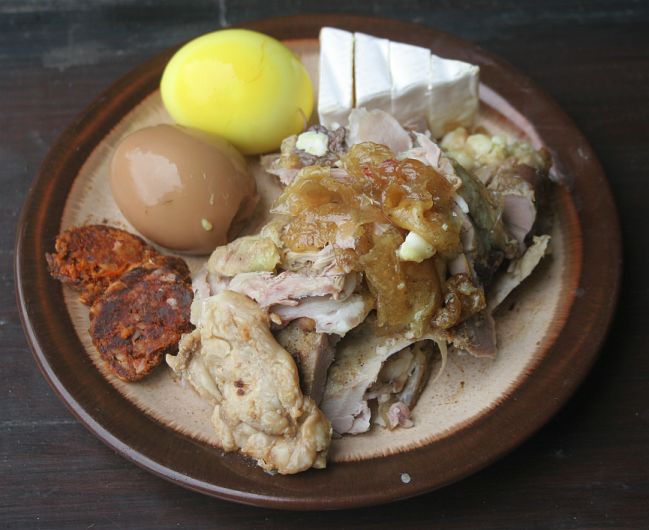 And part of the reasons I finally gave up my carni days for a while though I might have some more in June… But I don’t know if it would make much sense, I don’t have proper meat left anyway but it doesn’t matter, I must focus on animal products as always, I have no other options.
But now I add fruits

I already did it on some days… 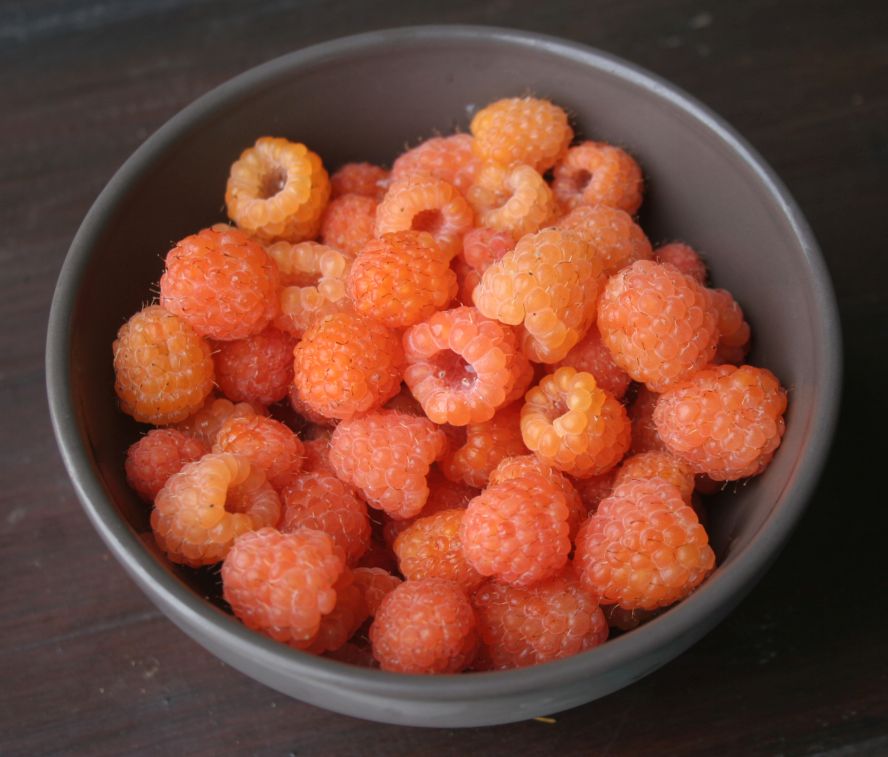 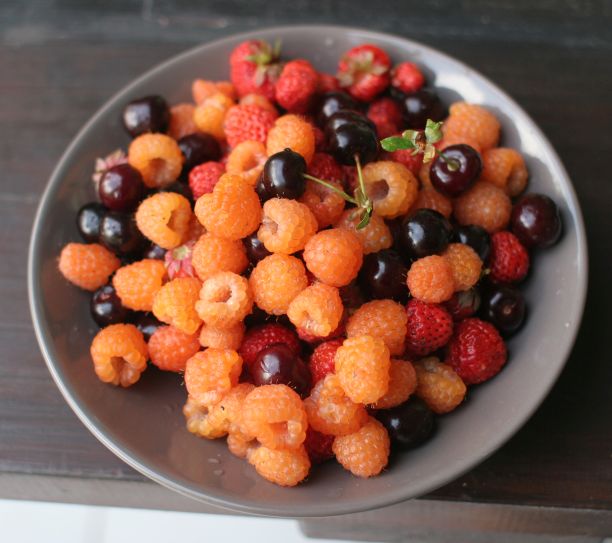 The colors are a bit odd, there are many rainy, gloomy days lately… But my raspberries are pretty lovely color wise anyway. I had yellow and red ones originally, then yellow, pink and red but now I have these pinkish orange ones…
These are for two and raspberries are low-carb so it can be squeezed in so keto enough

I ate the smaller part of the bowl, of course (and mostly the lower-carb ones as my body loves that approach better and I LOVE raspberries anyway). And my SO went and picked more fruit for himself for dinner…

Dave, I was curious about your mention of Deviled Ham as I only saw ‘lunch meat’. Then I saw the package for it. I don’t believe I’ve ever had it. How would you describe it? Spicy?

Yeah, Deviled Ham has been around quite a while, since I remember it from when I was young.

As far as taste, it’s hard to say really, but it’s usually salty and extremely fine ground. It was always used to simply spread it on some bread for a quick sandwich. (As shown on the label) But I just remember we would eat it as kids, along with Spam, Vienna’s, etc. I just pick it up every once in a while for something different. Plus you never know what you might be able to make with it?

Here’s a few shots of the label, which is just a paper-wrapped can. Believe they have always done this, at least I don’t recall them ever printing their info on the can itself. (I’m sure it’s cheaper too) 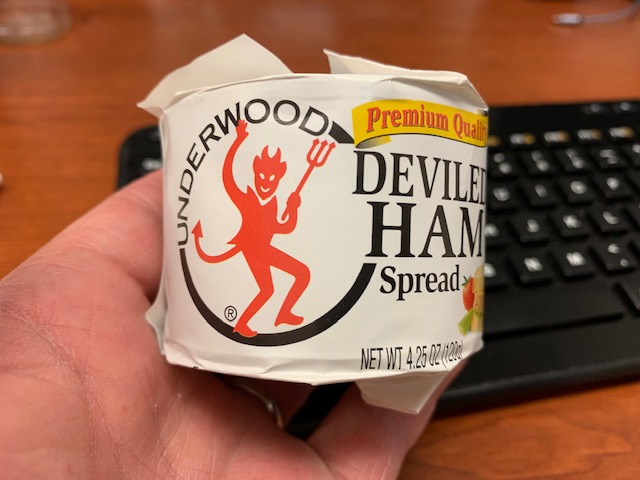 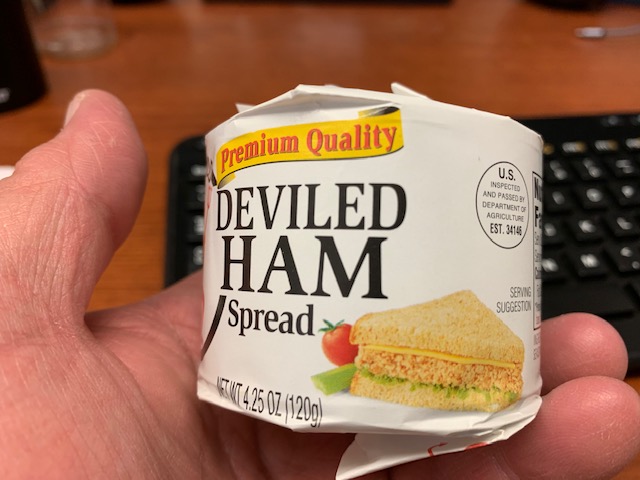 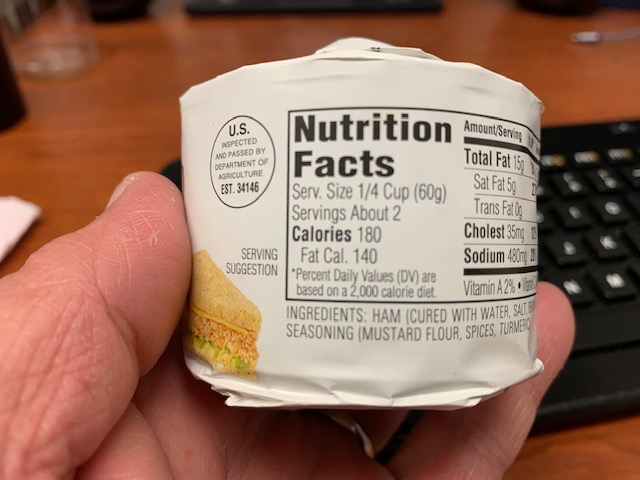 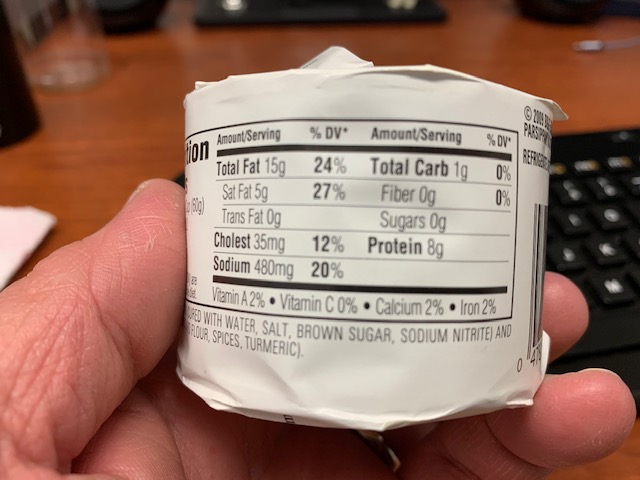 Actually just checked on-line to see just how long it’s been around, and this is what it showed…

It’s really interesting. I was born in 1961 but my parents were immigrants from Greece so it wasn’t on their radar. I don’t believe I have ever tried Spam or Vienna sausage either.

Yeah, those three are something I would suggest trying, at least once. But I happen to enjoy them all. And yep, back in the day a lot of families liked them since they were cheap, easy and could get the kids out of their hair faster!

… But we also enjoyed them, so it was a win/win. Hope you try some.

I too grew up on those three. Still like them all today although I eat less spam than the others. Deviled ham and Vienna chaffle sandwiches are my go to when I have to brown bag lunch.

Yeah, I think a lot of folks did back in the day. One of my favorites was just simply stacking Vienna’s on bread with some Mustard and I was good to go. … I like to keep some around, and of course the Pups love them too. We don’t eat them regularly either, but they do well for when we just want something small. Or if the Wife wants to fry some Spam up to add to breakfast meats for variety. I know a lot of folks use them for when they go camping, hunting, etc.

A tasty low carb Brazilian Moqueca shrimp stew with so much flavor, you'll imagine you're eating it on a beach with your toes jammed into the sand. 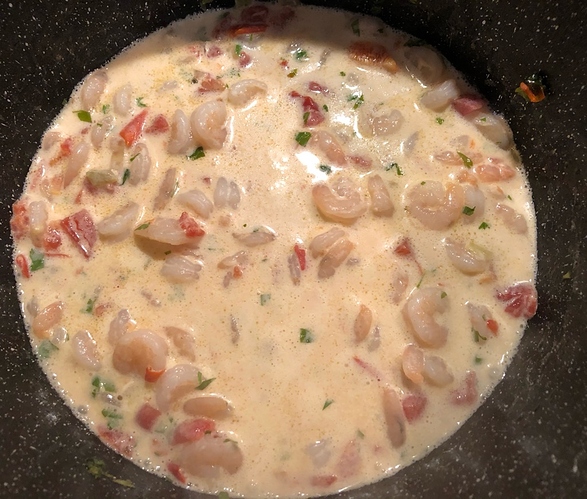 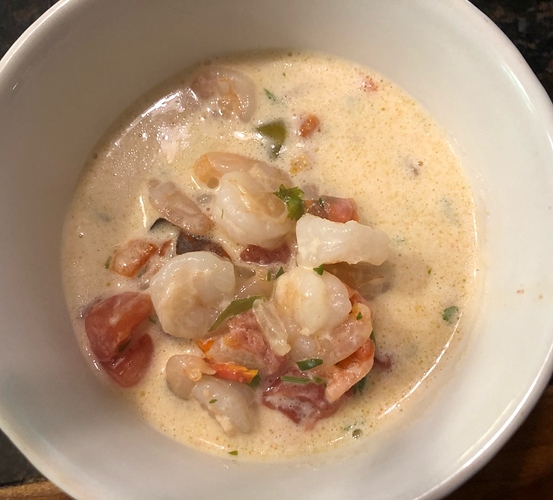 Dinner… 2 Quarter Pounders wrapped with Ham and Swiss and a Salad. 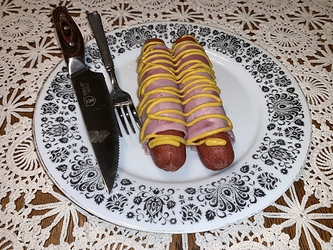 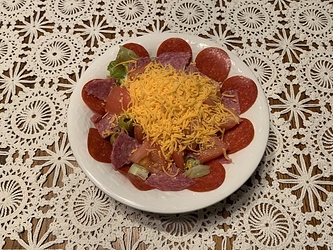 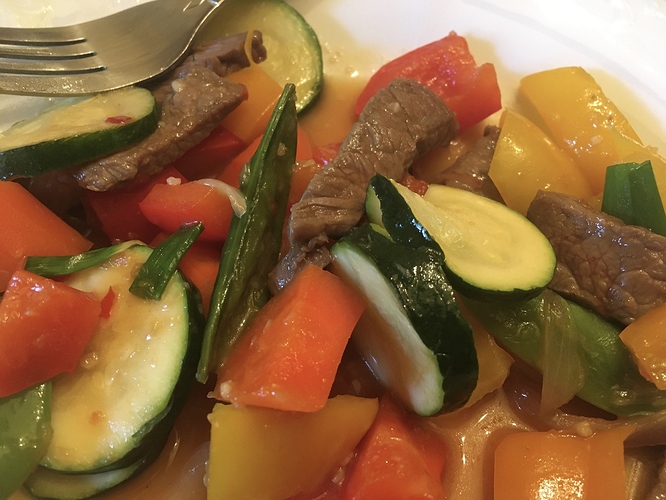 Got enough ginger into it this time.

Always my goal as well. Hard to get enough ginger in a stir fry or curry for me! 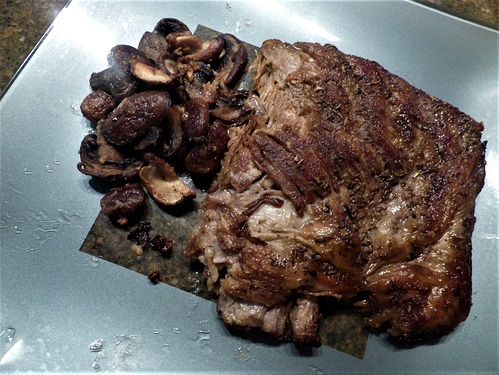 5th day is somewhat dirty carnivore. Had 2 bratwursts and 2 eggs for lunch, and leftover ribs and some mushrooms for dinner. I love those slabs of pork ribs, so tender and a really good value compared to the puny ribs usually found at the supermarket. I source my meat at a restaurant supply place since COVID, you do have to buy in bulk so my freezer is stuffed with a variety of wonderful protein now. The local farmer’s market has started to deliver also, and they have some great local cheeses and meats also, as well as of course veggies. Since I only eat protein and veggies (and love the natural flavors), I am well taken care of now. 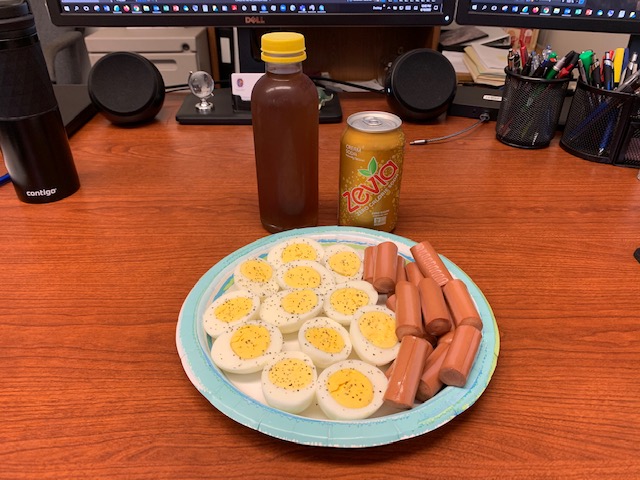 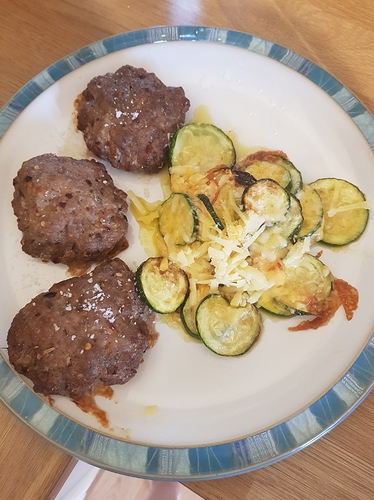 Today for brunch was a new chaffle recipe that did not use any cheese. It was similar to white bread texture. The egg salad was basic with chives, Dijon Mustard and avocado mayo. I forgot to add dill. Overall, I liked the recipe/technique for the chaffles, and the eggs were cooked in water and a little bit of vinegar in the microwave. A different way to cook them, although I s 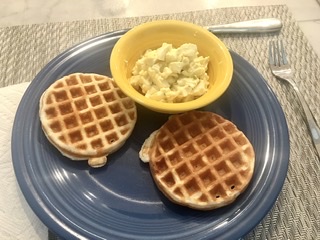 till prefer to use the IP for HB eggs.

We ate lots of cheap canned pork liver pâté as kids… And parizer (I found it as bologna sausage so that’s its name too. it’s parizer to us in Hungary)… I wouldn’t touch either now but they were tasty enough. And we had spam too.

Yesterday I tried to make Alvaro’s (my SO’s) day low-carb. I am on low-carb almost since a decade and while I am aware he will always be on high-carb as he has no other options, low-carb feels horrible to him, well, some low-carb meals happened in his life and he survived just fine (he really felt just the same as usual and he is very healthy).
It’s just very tricky as he eats everything with a mountain of grains or potatoes. Except soups and baked goods. So I made just those. Sesame seed muffins for breakfast, onion soup with poached eggs and cake with strawberries and chocolate for lunch… And then the carby food in the fridge made an appearance for dinner but there will be times when it won’t be the case. He felt normal after TWO low-carb meals

But he can’t eat cakes and muffins all the time so it’s just a tiny experiment without impact on the future. Whatever, a lower-carb and protein-richer day was made, it’s good.
I only have photos about the cake now. It’s the prettiest cake I can possibly make as I can’t make frostings, I am not good with my hands and can’t be bothered anyway, it’s food

And it is more than enough pretty for us. 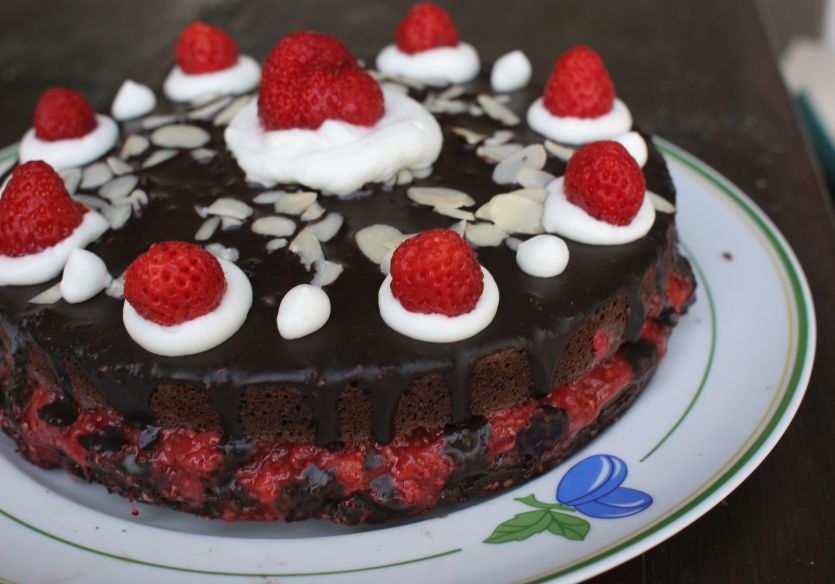 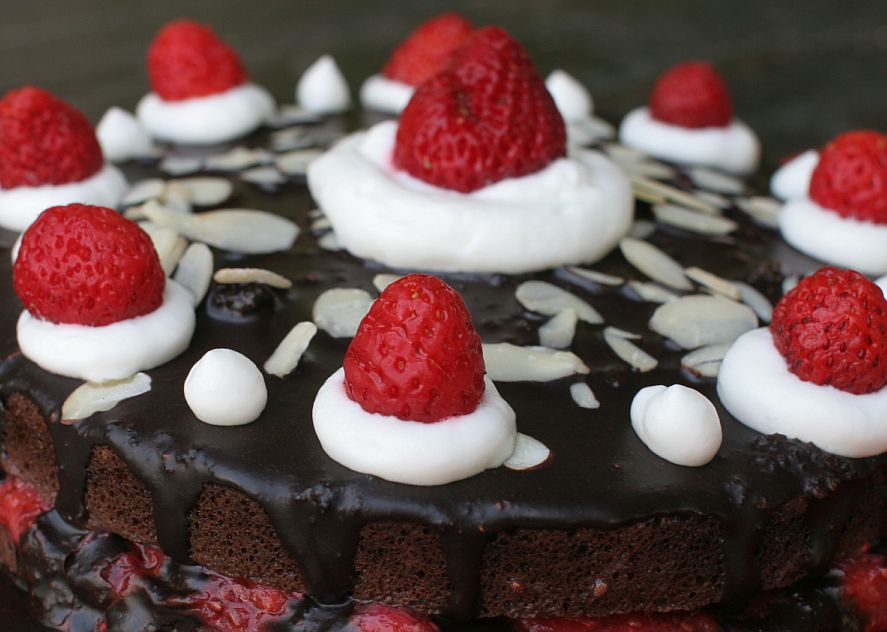 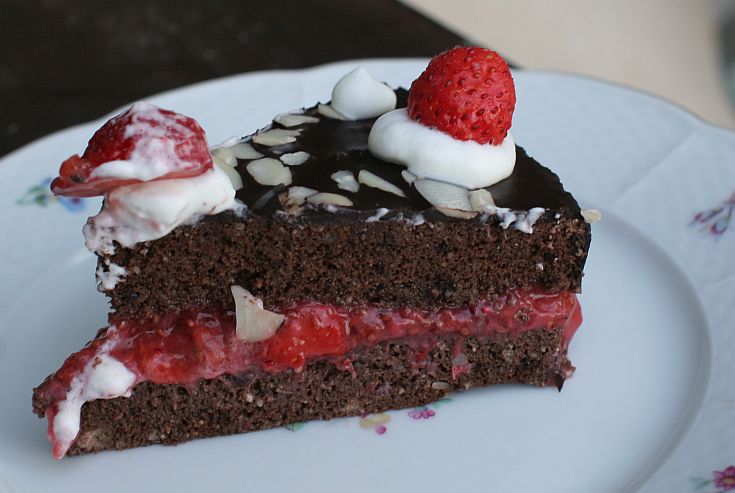 It’s not VERY low-carb but a slice fits into my keto just fine. Or 3 (actually, the whole cake but my carb limit is high on simple keto). And it could be made lower-carb with a sweetener without net carbs, we only have xylitol at home now and that’s carby. But it doesn’t matter for us.

I definitely don’t like cakes now, I got bored of them several months ago and never got my desire back (well, when I stopped eating potatoes and bread/pasta, it lasted for 5 years then the desires came back). Oh well, I had pork sausage and eggs and those are awesome.
But the cake made an almost OMAD day possible, it’s something.

Now that we have forum again and the accumulator of the camera is recharged too, I will bring some more photos later

My food probably will be prettier and more interesting as we have a ton of red (and whatever color my raspberries have) fruits. 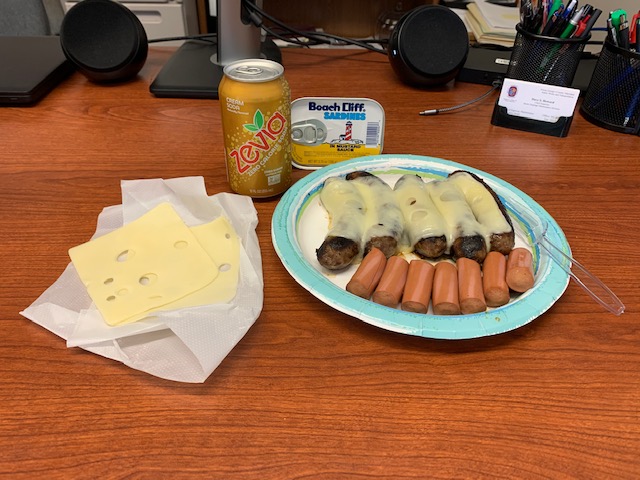 That certainly looks beautiful to me. Quite lovely.

It’s too easy this way, white cream, red strawberries in their full glory on the top and chocolate… what could possibly go wrong aesthetically? It’s good for people who can’t make a proper pretty cake without these tricks

But the cake is decent with the almonds in the chocolate too, that’s the basic appearance.

I will make an ice cream cake later, that will be more of a challenge but at least my ice cream is hard enough for the task unlike my whipped egg yolks… I definitely won’t use butter for a cake, maybe gelatin… I used chia and konjac flour in the strawberry filling this time as it was too liquid.

I like playing with food a bit, it’s a hobby if it’s simple enough and this one is. It doesn’t matter I don’t want cake anymore.