No… Those ARE the small amounts I spoke of!

You know what they say about cameras… So they just make the bowls appear to look bigger.

But the shrimp bowl is a pretty good sized though.

Truth be told, I would much rather have had a smaller bowl, with larger Shrimp though! … You should see the size of the Shrimp my Wife picked up for me yesterday. Colossal Shrimp I think they’re called. Coming soon to a plate near me… 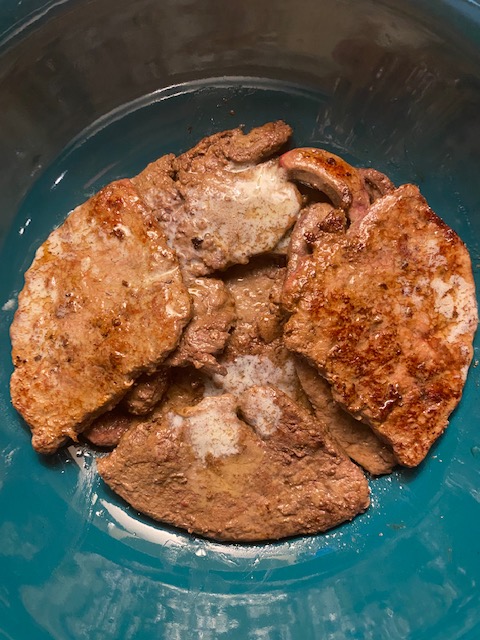 I gave you a like heart, cuz I know this is a good thing you are sharing. I hate to admit I don’t like liver, don’t want to try any organs, and dislike all fish/sea food. Yes, I am a cotton headed ninny muffins.

don’t want to try any organs, and dislike all fish/sea food.

Once upon a time in Salerno, Italy, I got a ‘seafood salad.’ So I’m thinking crab meat, mayonnaise, maybe some celery or a few other vegetables, and spices - something like that.

Heck, it was all eyes and tentacles. My wife could not stand the sight of it. I toughed it out and ate it all, and it wasn’t bad. 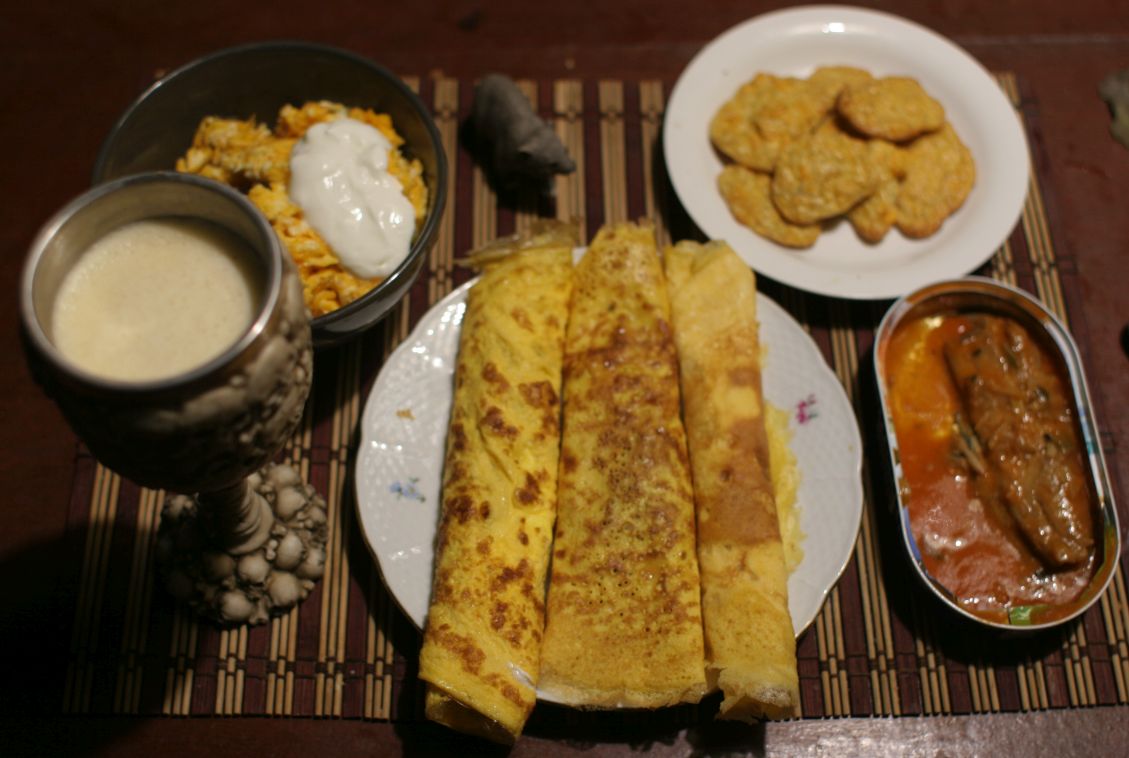 In the back: scrambled eggs with dry, very rich, fatty sausage from the nearby pig farm, it’s quite good and a little is enough. I have my scrambled egg phase after not liking it for long, I used 5 eggs.
Carnivore biscuits (egg, cheese, some spice. I don’t like very cheesy things so I use boiled egg yolks as flour, not just ground cheese. I hate grating and I use my seed grinder whenever I can, I have hard enough cheese for that :)), I forgot to eat them as I put them back into the oven and my memory isn’t that good…

I hope they will get crunchy this time, my new mini oven has very low temperatures as well…
And a wombat figurine is anyone is interested.

In the first row: egg milk in my new skull goblet (the stem is vertebrae), 3 pancakes (one with sour cream and dill, one with prosciutto crudo, I am not into it but gave it another try, it was on sale and I didn’t find my bresaola anyway - and one empty. I didn’t eat the sour cream one) and some herring in a too sugary sauce. I won’t buy herring fillet anymore, all have these sauces. I didn’t eat the sauce only what was inevitable. My SO handled most of the sugar on his kind-of pizza, he is the sweets loving high-carber…

As I skipped some of the food and had no proper meat (I shouldn’t do that for days in row but I hardly could avoid it now. I must be better prepared. or not to be shy to use my super fatty pork), I was still hungry. And my problems started.
I won’t talk much about the rest of my meal/day but I tried a keto bar gifted to me, we don’t have such things here. It was vegan. And the worst tasting theoretically edible thing I ever had, hands down. Unless I forget something.
It wouldn’t be good anyway (it’s amazing that despite most plants used to feed people are tasty or at least neutral, people manage to process the hell out them and mix them in a way that they become horrible) and it was insanely sweet as nearly all sweets but they used monk’s fruit. I wanted to try that anyway and now I did. No surprise here, I hate all the too sweet sweeteners with a passion. Each and every of them are so horrible I would rather forget about sweet things and I really don’t want to do that, I love sweet things. Well, some of them.
I only like xylitol and certain sugars and tolerate erythritol. And maltitol has about no flavor but it’s still bad due to its effect so it would be quite stupid for me to eat it. (It is a tiny bit sweet in things for me, only not sweet alone, interesting. About 20% of erythritol sweetness so a maltitol chocolate is properly sweet for me.)

I ate various tasty things and much coffee and a very much water to get rid of the aftertaste of the monk’s fruit but it was super hard. I will avoid it in the future. It’s like aspartame or acesulfame k or stevia or sucralose… They all have about the same horrible taste to me, I barely feel the sweetness due to the super bad taste. It was a shock to my poor system.

Heck, it was all eyes and tentacles. My wife could not stand the sight of it. I toughed it out and ate it all, and it wasn’t bad.

I only ate tentacles once in my life but that was very, very great. What’s wrong with tentacles?

I don’t want to eat eyes though.

I am somewhat choosy if it’s about organs but I like liver and heart, probably brain too (I only ate chicken brain and that was very nice) but I can’t buy that.

“I only ate tentacles once in my life but that was very, very great.”

I hesitate to tell you what I thought you said there.

But I am definitely in the market for a wombat figurine. 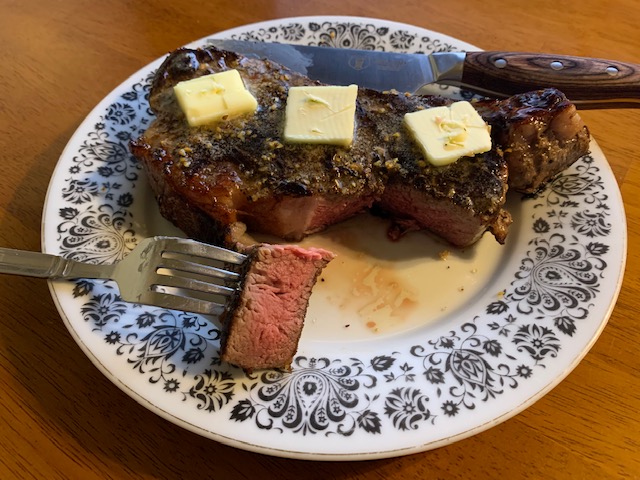 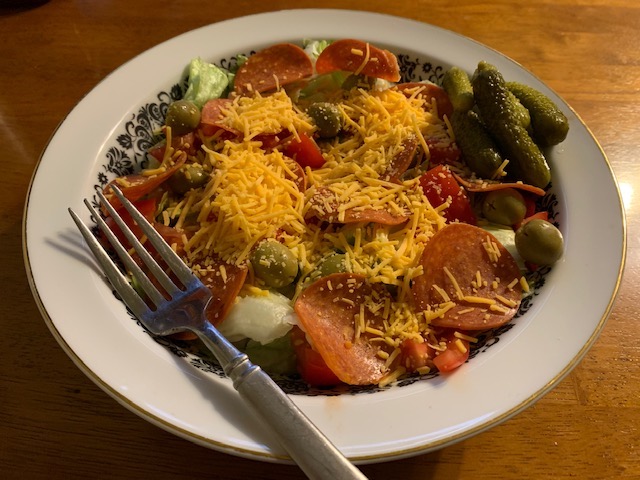 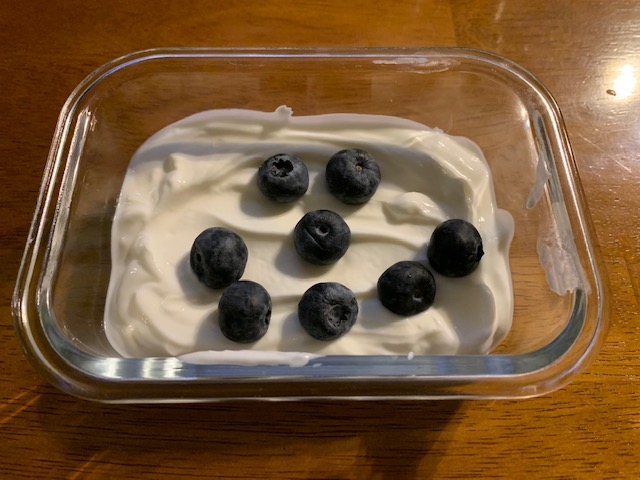 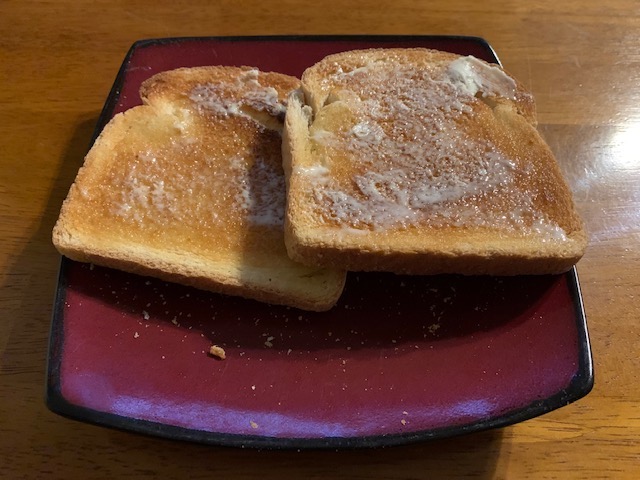 An appetizer to me, is just what finished cooking first!

That is interesting Shinita! I find Monk’s Fruit much more palatable than every other sweetener I’ve tried. I don’t find it has an aftertaste at all. Admittedly, I use it mainly in cooking where there are other strong salty, vinegary or umami flavours (salad dressings, tomato sauces, salsas) and occasionally keto desserts like cheesecake. I wonder if I’ve just started using less also, as time has gone on. I find myself wondering why MFS is not used more in commercial treats (protein bars etc)? They always taste SO fake. Maybe it’s more expensive or something.

I have no photo but I ate veal stew today (with paprika from New Zealand… I guess I prefer ours). I don’t remember ever eating veal before and I am curious what other think about it (though probably not all veal are the same. I only know - well suspect as they called it veal - that it’s veal, no idea about details like which part). It didn’t remind me of beef at all. My SO said one piece had a similar texture as beef

It was like pork with a little chicken hint but very flavorful. I liked it but I rather buy normal beef for this money

Even though that’s chewier.

I tried to tell him what I think it means and that I have problems with hyper-palatable, that’s something weird like “filling” and it’s probably a Hungarian one when girls say they don’t want to lose fat or gain muscles, they just want to be more shapely. These 3 are all verbs in Hungarian but the one with shape as root makes me confused, I never fully know what they mean. I guess they want to gain muscles but as girls, they can’t say that for some reason. Girls and muscle, that is sometimes weird. I never understood most women, me being biologically female never helped much.

Yeah, agree. I love the phrase: “Strong is the new Pretty” 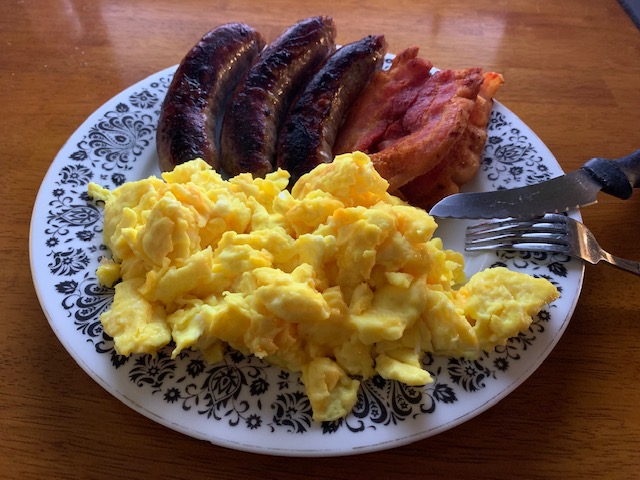 Dinner… Only ate the crispier Salmon on the back, put the other away. Also Coleslaw and the Wife made Chili a few days ago, but has been eating it by herself. So I agreed to eat what she had left. 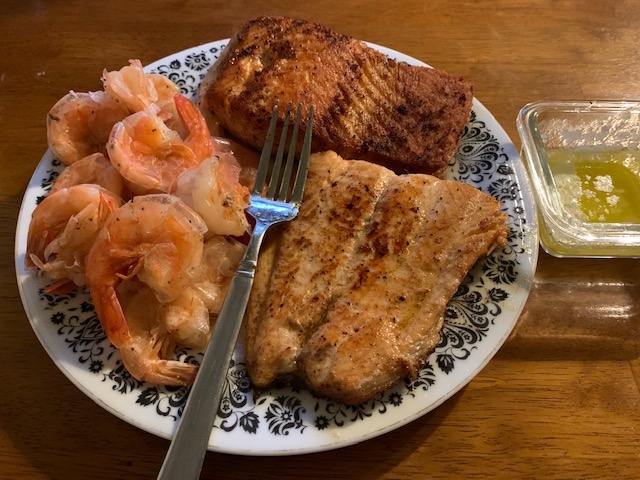 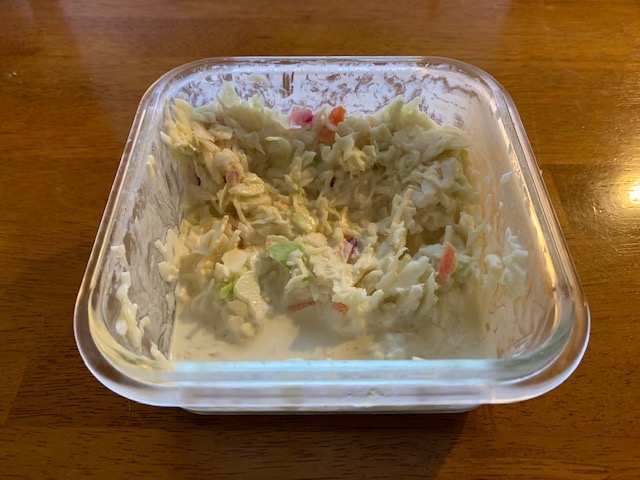 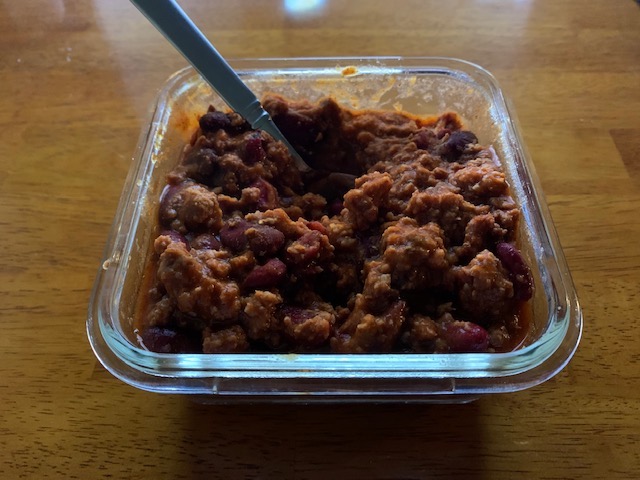 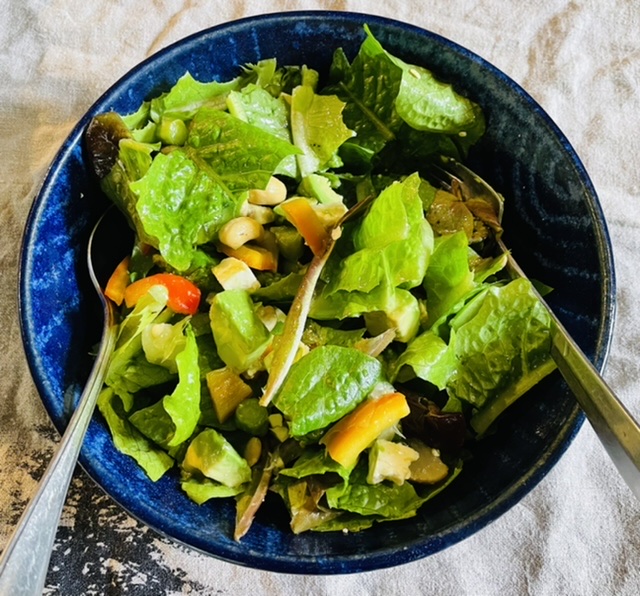 I had a small tin of sardines with lemon juice first. I don’t love sardines but it’s my attempt to eat for fish in an inexpensive way.
Now I’m eating this salad - lettuces, snow peas, fermented sunchokes and lemon juice are from my garden, with avocado, capsicum, fetta cheese, olive oil, vinegar and a few cashews (omit these for a very low carb version).

I’m still recovering my gut and appetite from the recent illness (no answers yet) so this will be enough food for my brunch. I look forward to exercise and a good appetite in the future!

Breaking fast with a T-bone, a side of sauerkraut, and a couple of eggs. Possibly some liver too depending on how much appetite is there…

2 recent lunches: 4 eggs and ham; 4 eggs and brisket (the brisket was too fatty for my taste). 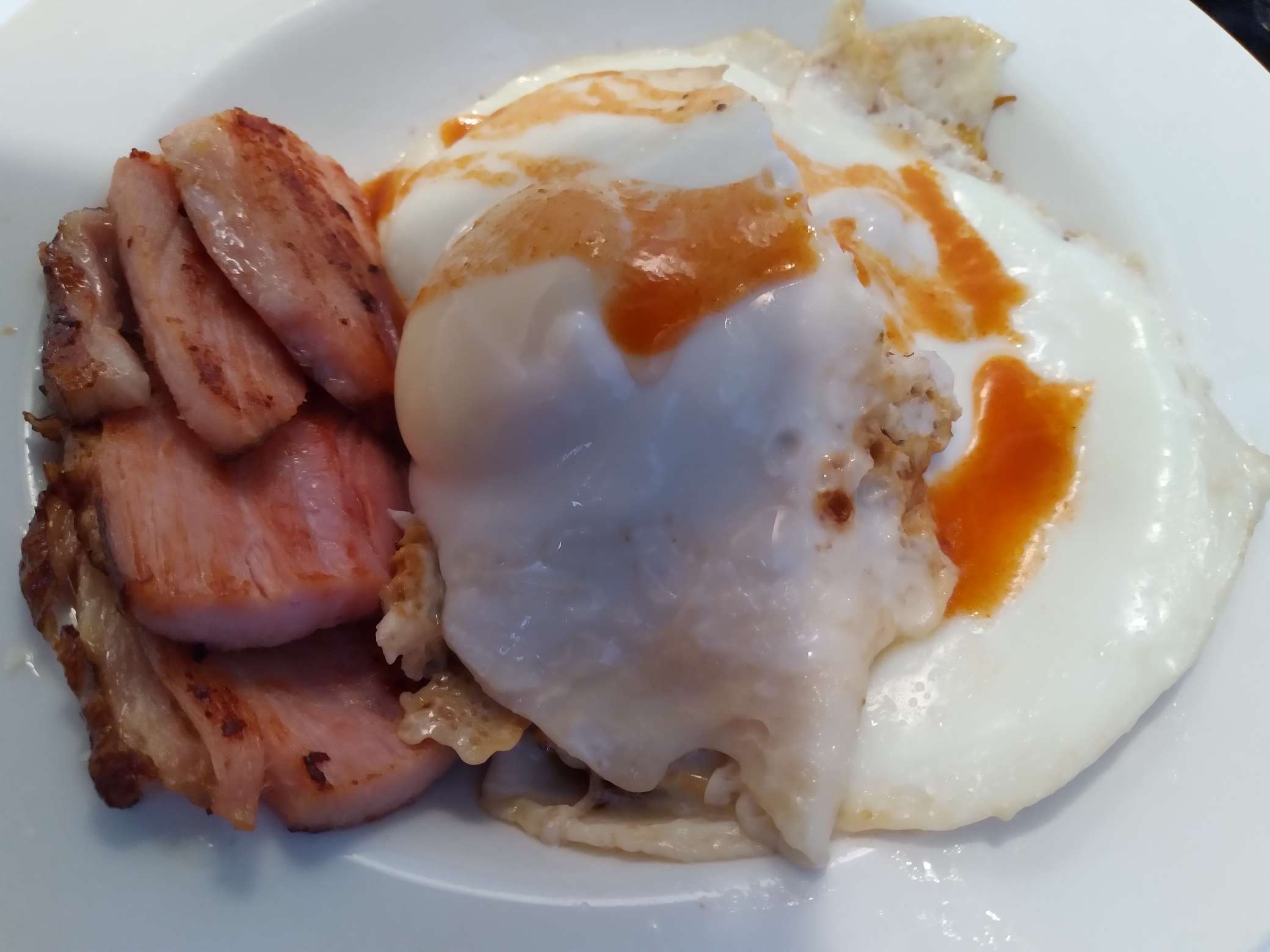 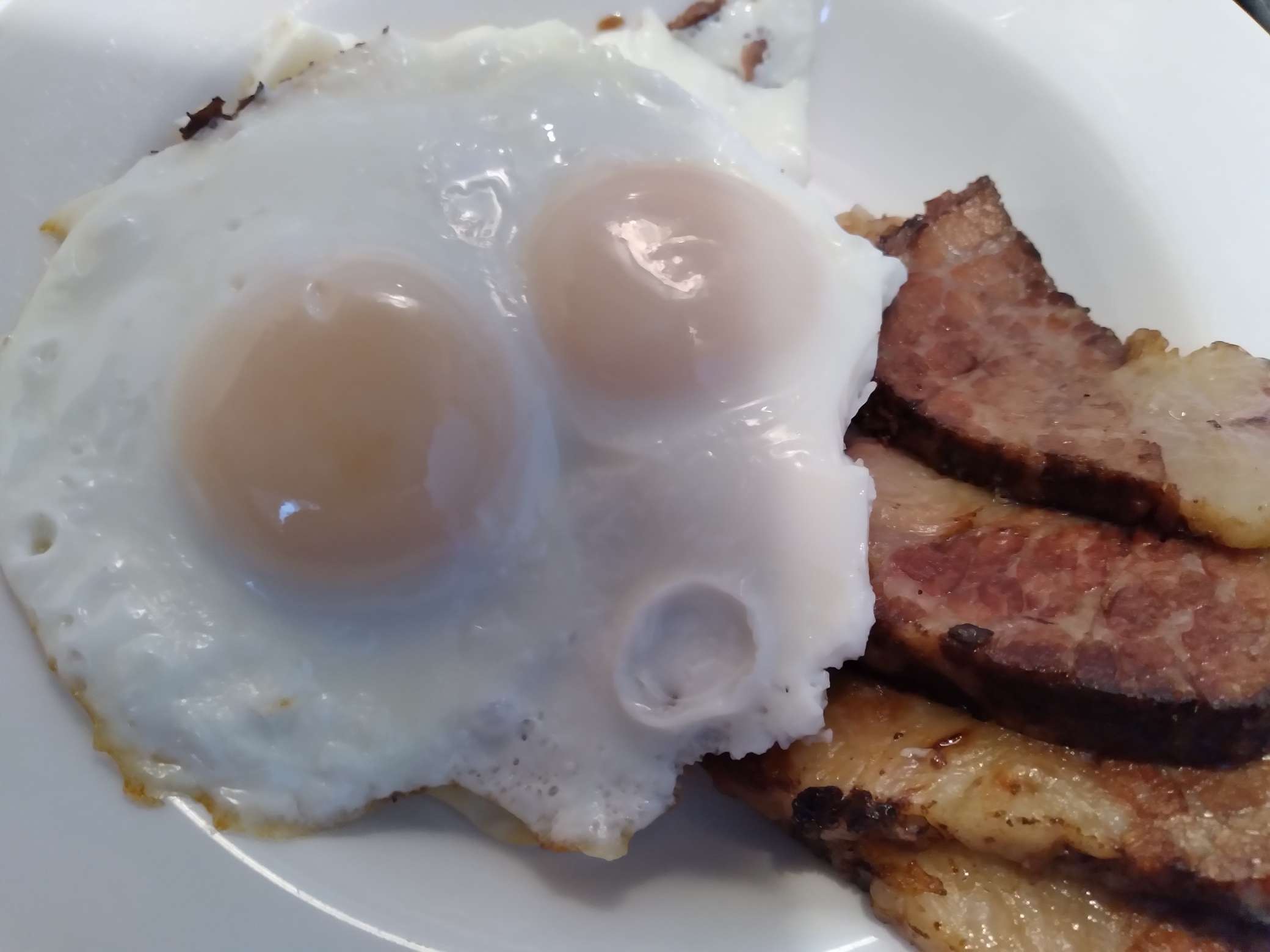 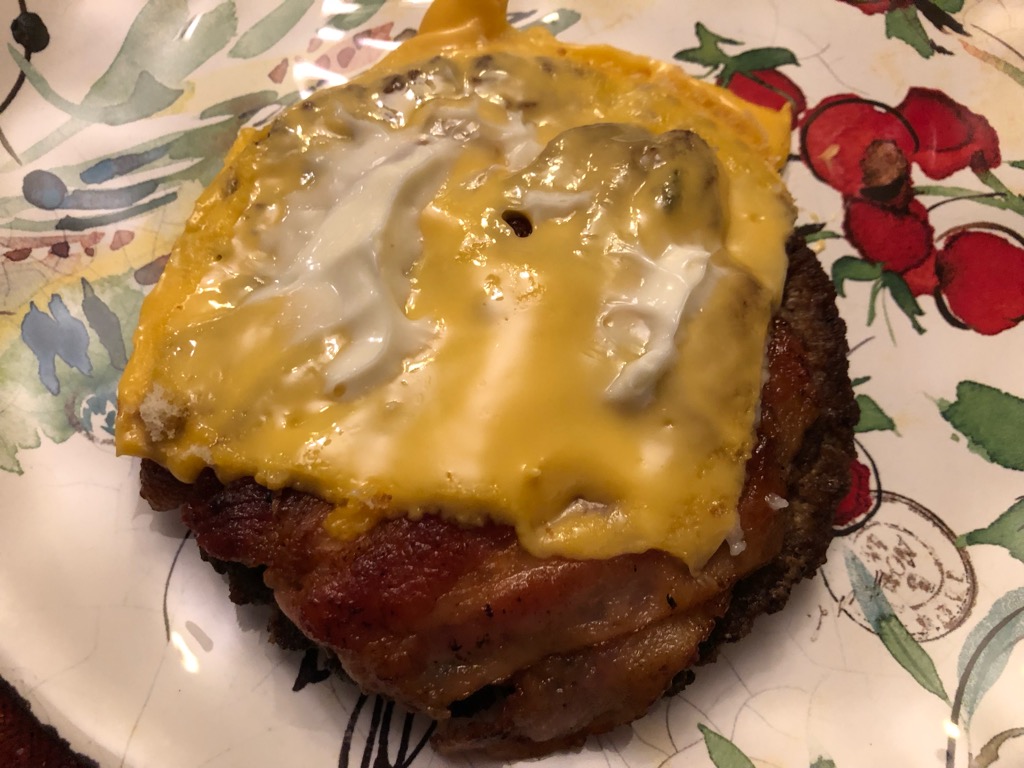 I have lots of tinned salmon, bought on sale, and it’s going on sale again. So I made salmon and egg scramble with cheese. I thought of making a quiche, but the scramble is quicker, easier, and I think better – maybe because it’s more moist? 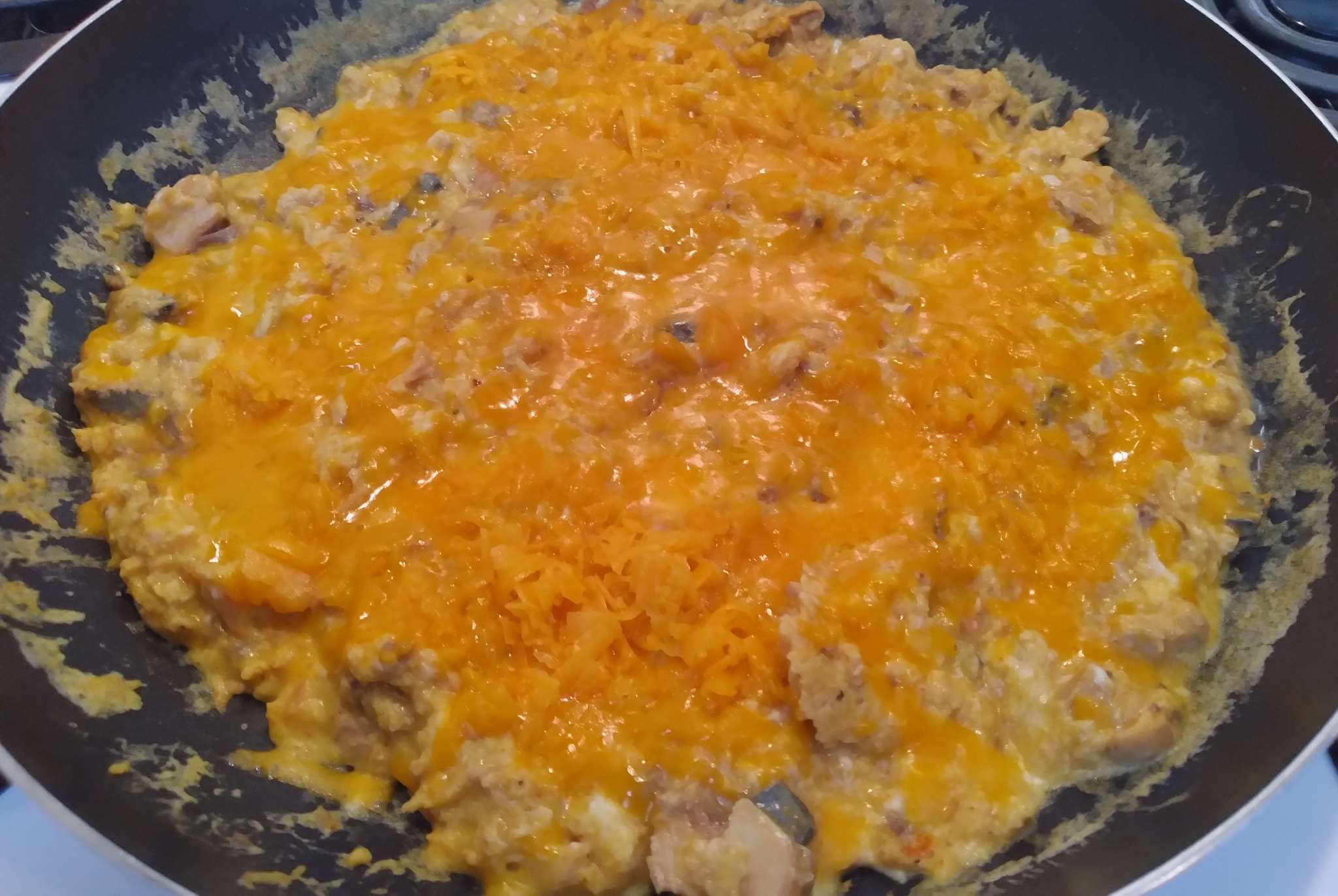 We never have salmon sales and tinned salmon is rare and sugary… But scrambled egg with salmon must be great!

Oh I didn’t show my beatiful sponge cakes yet, I put that only into the monthly carni thread! I guess my new oven works better than the previous one. They don’t even deflate as usual. 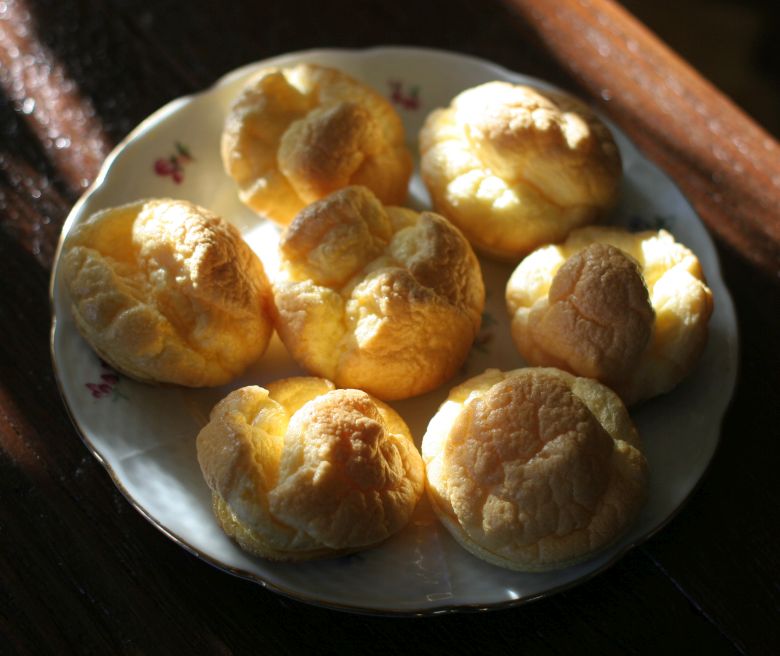 I have some “start of my first meal” photos but I couldn’t bring myself to play with them (remembering to bring upstairs the CF card etc.), it’s always scrambled eggs and pork shoulders lately anyway

They are just perfect.

They sure look nice! 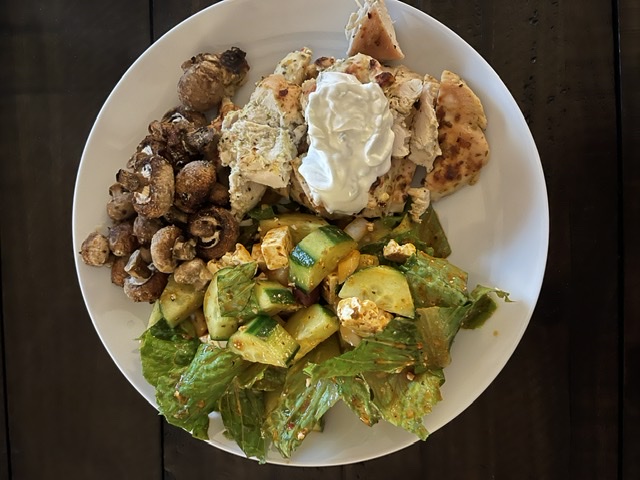 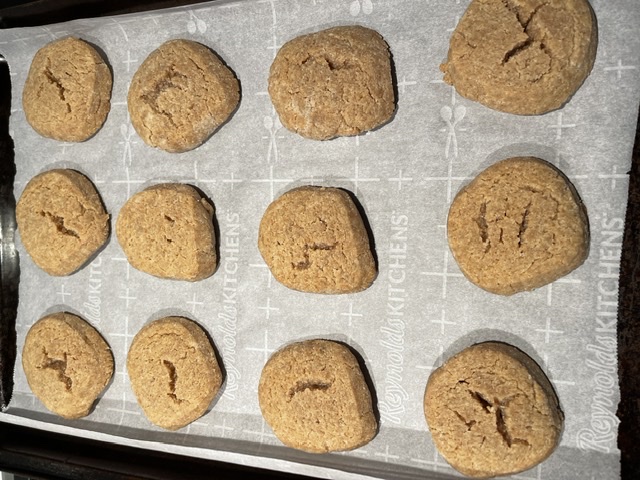 That chicken souvlaki sounds awesome! Trying it this afternoon.