Nah, just took care of some stuff tonight no ones else eats, since I’ve been doing 3 day Fast for the past few weeks. And told the Wife I was going to Fast again earlier today, and so she just reminded me I had a few things still in there, if I wanted to eat. So just moved the start time up a few hours.

Sorry, no pic but I cooked some riced cauliflower this morning without my usual additions of garlic and onions. Added LOTS of butter and stirred in heavy cream. Turned it over to hubby to add however much sweetener he wanted for a “breakfast cereal” (he used erythritol). The butter and cream really does a good job at masking some of the cauliflower flavor.

He said next time he would try the brown sugar swerve and grate some nutmeg over it, but he was happy with our first experiment. 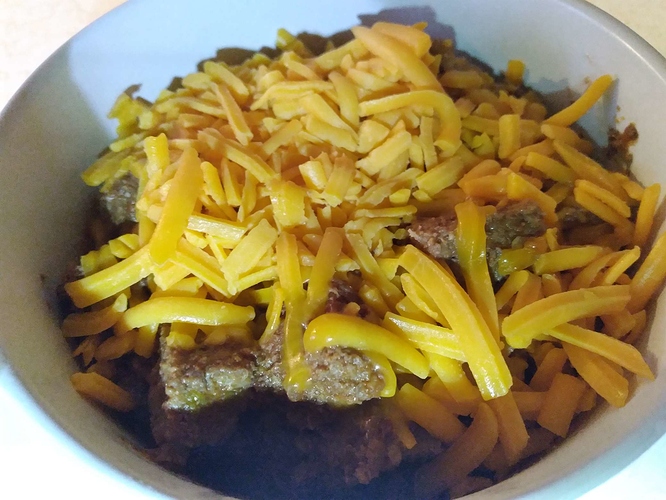 Thought of the day… One who may speak “some” English, …may not actually understand “Ingles”?

Was planning to break my Fast tonight at Dinner with the Top Sirloin I dropped in the Sous Vide last night, but I actually wanted an Iced Tea after a long morning with mostly meetings. So I picked up a couple burgers and those McChickens things while I was there. …Shouldn’t take long, so I thought.

So I told the lady, two McDoubles or whatever their called now, no ketchup, no bun. (She said huh?

) I said sin pan, sin salsa de tomate? (She said ‘ah si, no problema’) … Then asked for 2 McChickens, no bread. … (She said, again, huh?) I was like “Really?”… sin pan? (Ah si, giggles…) Then I said you can put them all in “ONE” platter… She said sure, no problema. And I also want a large ‘un-sweetened’ Ice Tea. - Well, some minutes later I get a freakin’ huge shopping bag, which I already know why. Shaking my head, I just took the bag and left. …After l left the parking lot, had to turn around since I never got the TEA!

- So I go back in and let her know I never got my Tea, with the huge shopping bag. She says ‘Large Un-sweetened Tea, Si?’ I said Yes Ma’am. Started back down the road, and at the light, yep, took a sip… Of course it was Extra Sweetened Tea.

So of course I had to go back once again, and finally got what I ordered on the third attempt. Of course, what should have taken maybe 5 minutes?, took nearly 25! But hey, I did get a free four piece matching designer dinette set, that was hardly used as the image shows. 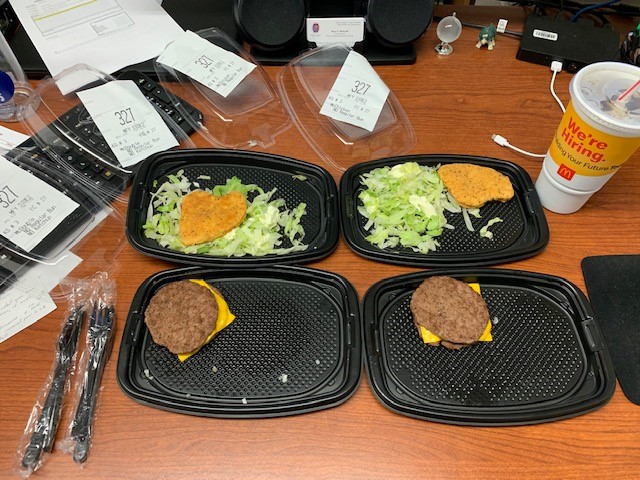 The only place I ever had a problem was in Northern Ontario. I knew it was a francophone area, but I encountered a young employee who seemed to speak no English. Or maybe he was just taken by surprise. If I’d known, I certainly could have fumbled in French. He immediately went and got a bilingual person, so it all worked out.

At drive throughs, I don’t mention the bun. I just toss it later. Too complicated, apparently.

I do this often as well, and never use the drive-thru, since there’s usually a nice long line. But lately I’ve been taking a chance and just ordering it how I want it. But it is easier most times just to get it as is, and as you say, remove the bun. Which I usually just break up and toss off to the side of my office building.

But I do think they try to do too many things at once, and simply forget what they’re doing.

I’ve started steaming my eggs (instead of cooking them in water). One of the touted advantages of steaming is that the egg whites are “tender.” To me, this is a minus. Rubbery egg whites seem more filling. 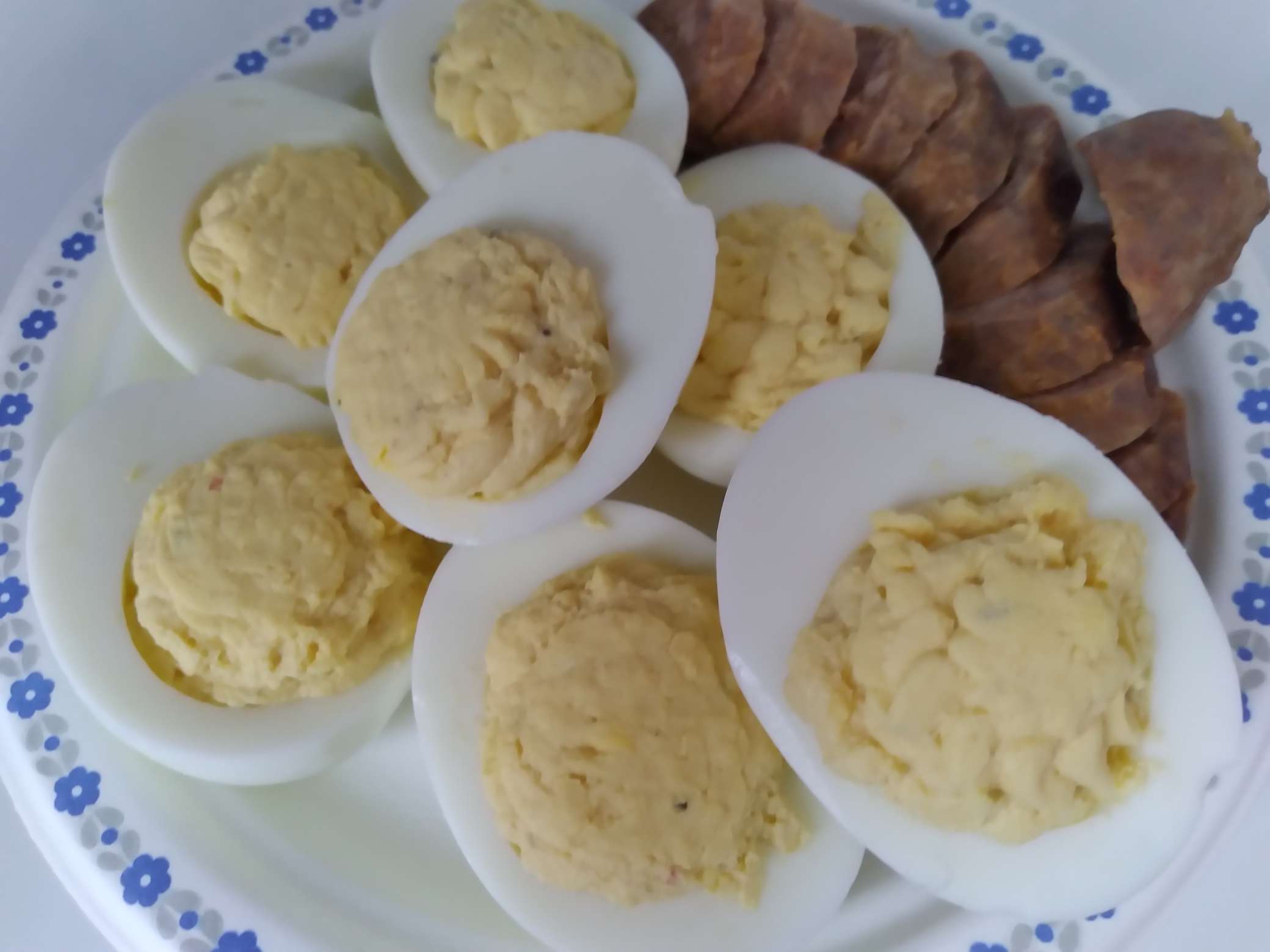 Dinner… Sous Vide 15 oz. Top Sirloin, Mushrooms and Onions, Shrimp. Also cut off most of the Fat and fried it up more crispy. - Also some Bacon, on a side plate. Wife also picked up a Peanut Butter Caramel Chip Rebel, since I hadn’t had one in a while, but I only ate about 1/4 of the pint. 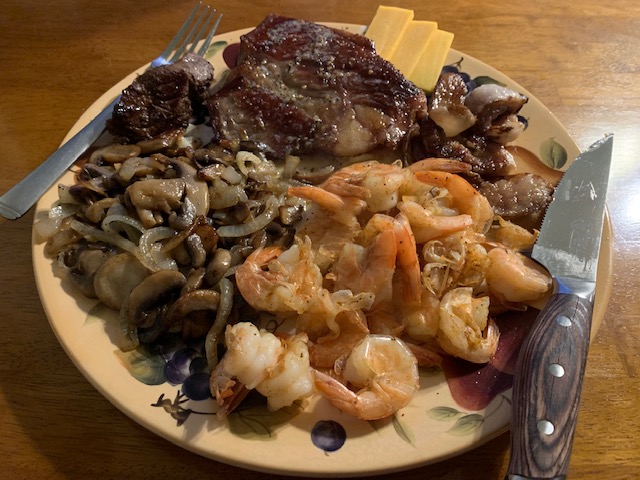 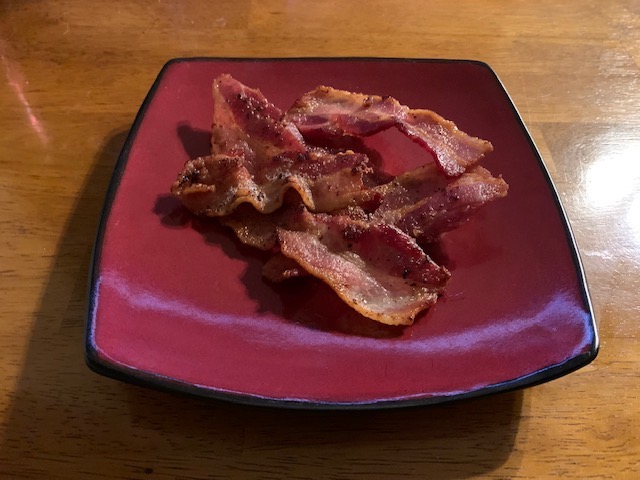 When I started keto almost 4 years ago I did that because it wasn’t common then to order burgers w/o buns. I had a lady at Burger King blink at me when I said “no bun” and she said “I don’t know how to do that”. I said never mind and tossed the bun…… along with the cheese I wanted stuck to it

Wow, I’ve been ordering “just the patties” for years. If the cashier doesn’t know how to ring it in, they go and get someone who does. Often, they’ll ask me if it’s “for a dog,” or if I want seasoning on it, because some people order meat patties for their dogs.

It helps to know what goes on behind the scenes. I used to work in fast food. They have a very streamlined system. A certain number of patties, complete burgers, etc., are prepared in advance, according to day of the week and time of day. If someone orders something different, it might take longer.

Best not to order a custom item at the drive-through. If they don’t have enough patties on hand (not already assembled into burgers), it can take a while to cook fresh ones.

If you can phone in your order ahead of time, great. But not all places allow you to do that.

A hamburger with the bun costs considerably more than a beef patty, so I’ve never done the throw-away-the-bun thing.

I’ll be glad when the corned beef is gone, and I don’t think I’ll ever make it again. Too salty for me! And lots of fussing and waste. 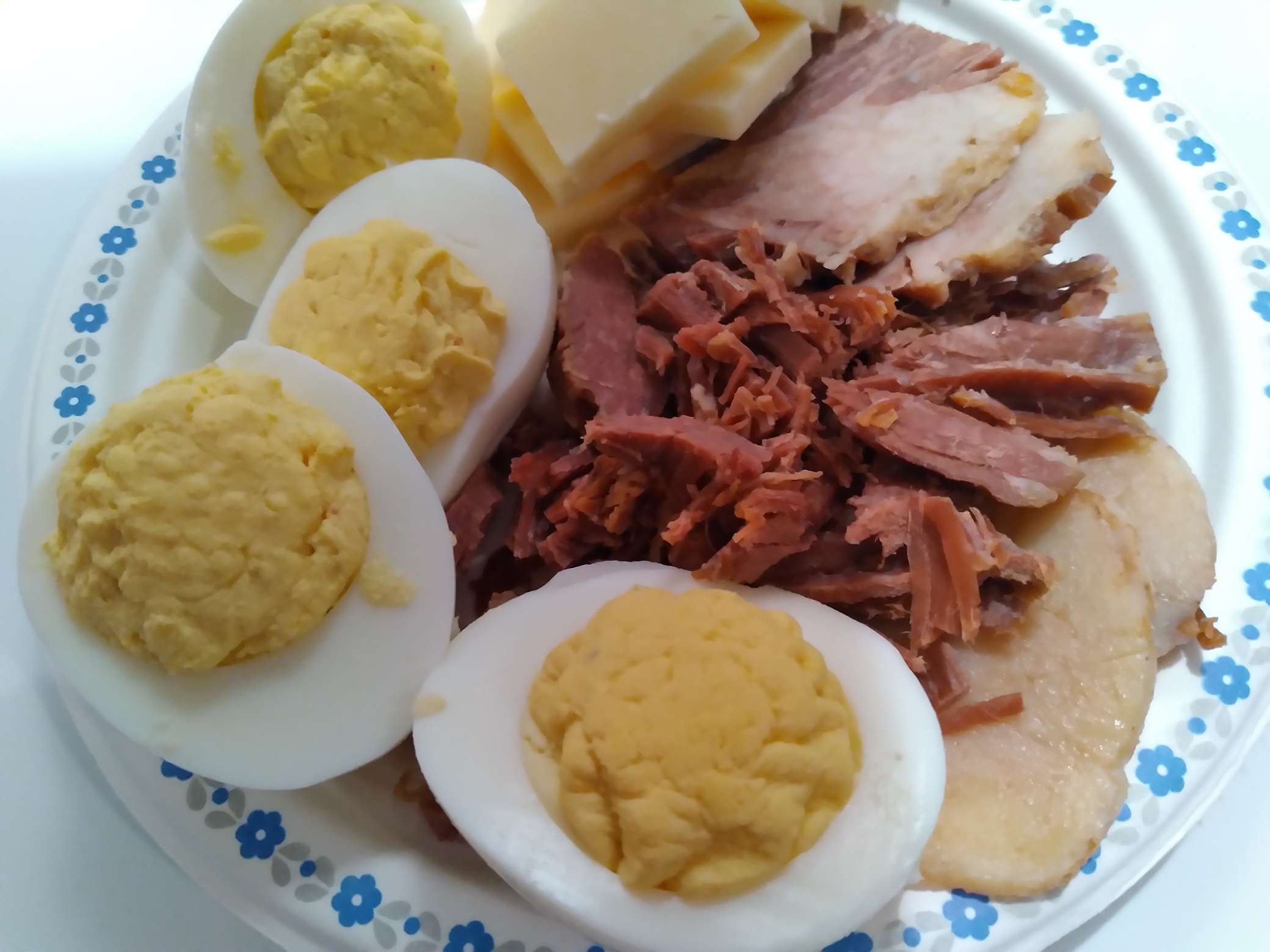 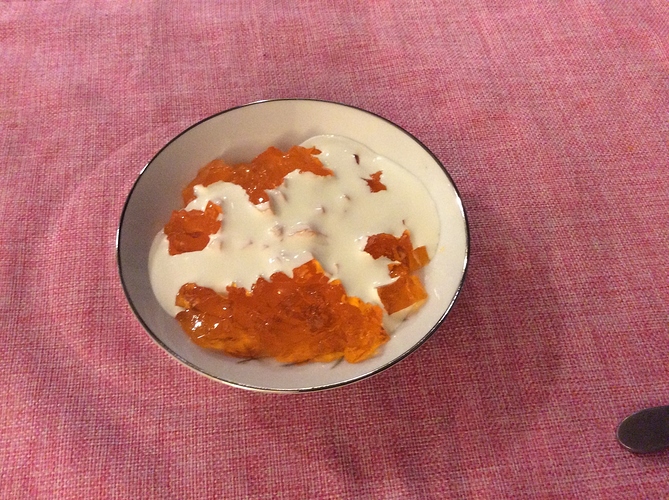 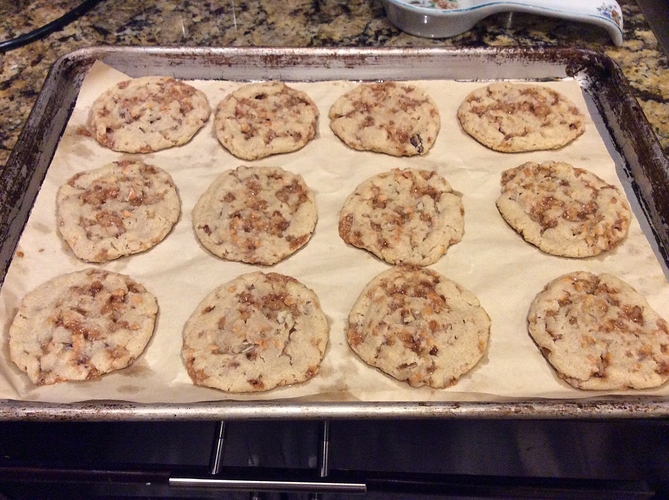 image.jpg1832×1368 767 KB
These are not keto cookies but they’re part of my therapy. I bake sugary treats and then take them to the office and give them to all the people there. It’s a testament to my willpower. And I figure the sicker they are the more the company will need me. 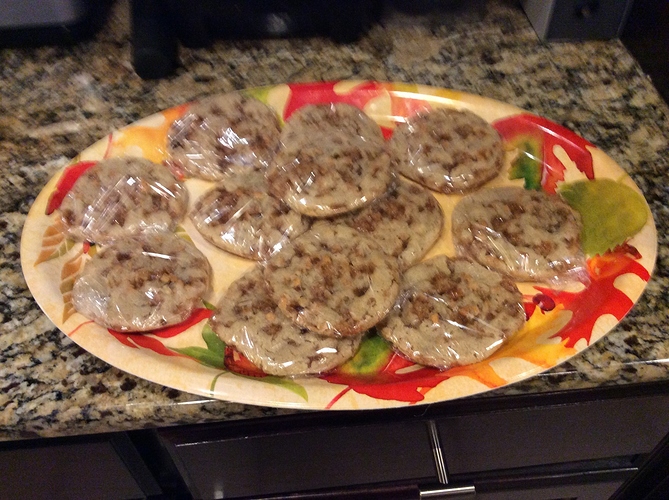 I always give posters an extra

when I read that they’ve fed some delicious keto foods to their dogs. My dog loves eggs too. Sometimes I give him a soft-boiled still in the shell as a little food puzzle, and I think he likes figuring it out (…an outdoor activity only!)

Mine are quite spoiled, and get Eggs quite often. We usually add a little something to their meals, since I wouldn’t want the same ole stuff day after day. Not to mention smelling all the good stuff being cooked. We regularly make them their own Chicken Thighs, Gizzards, Steak, Liver, Hamburger, Sausage, etc.

they always get some sort of enhancement or something added to their dry mix. Not to mention I had to put the older girl, Shelby, on a very expensive Hill’s brand dog food. At over $90+ per bag, and both girls are actually getting it, helps to add those things and helps make it last a bit longer. (She had three ACL surgeries, and not being very active, she was 101 lbs. just 6 or 8 months ago. She’s now in the low 80’s, which helps her mobility some. Little girl was 94 lbs. herself, but not overweight. She’s the Hunter and fast, and not much gets away once she’s on it. Took out another Rabbit not a week ago. But other then their special food, they have pretty much been Keto with us since we started. Quite Happy.

Here’s the three brats, but unfortunately, we lost their brother Keto just a day passed his 8th Birthday. He’s the one in the back, and was 4 or 5 inches taller then his sisters. He had Kidney failure, and was one of those very special pups that we really miss. Pretty much every ones favorite, though they are all great, especially together. - Shelby’s the darker one on the left, and Khaleesi is the one of the left. 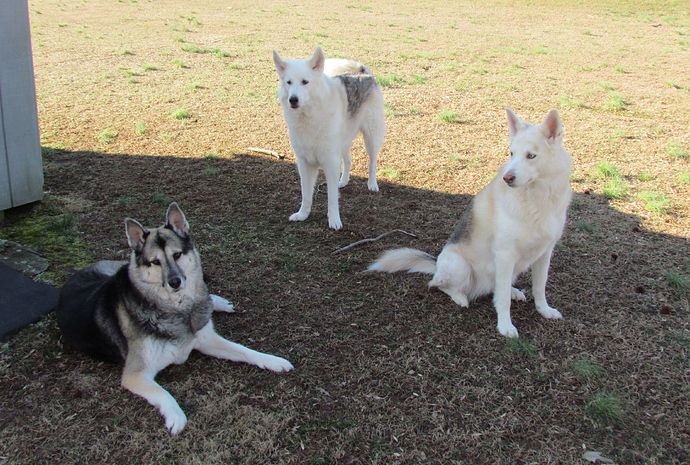 And Shelby has had to deal with one of these crazy big cast three times, which is taking a toll on her in her older years. So she’s on some pain meds, etc. to help offset this. So being over 100 lbs. didn’t help. 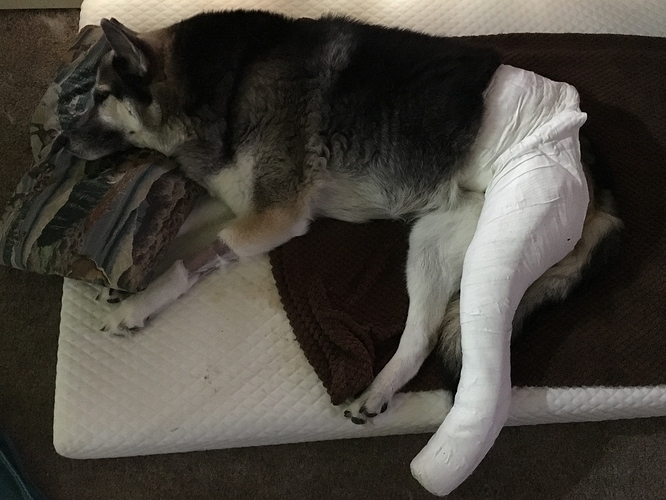 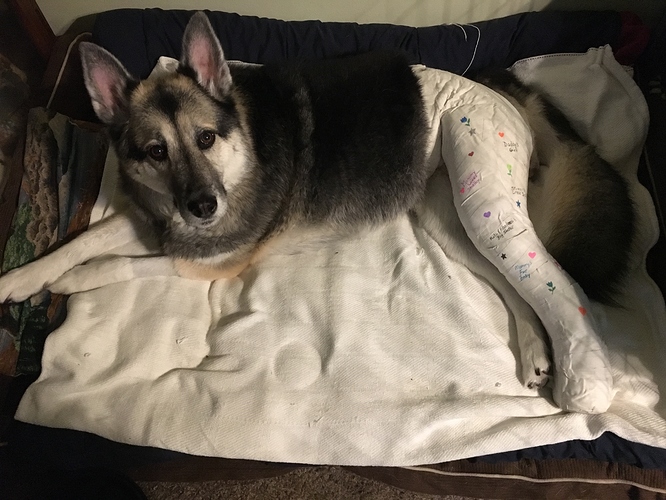 And yep, the Wife signed all over her cast too.

Is there any way to give multiple hearts for this? Anyone who will go to such length for their beloved dogs is a rock star.

Before we got a dog we would cook 4 slices of bacon, 4 eggs and 3 hamburger patties (2 for hubby and 1 for me).

Now we always cook 5 slices of bacon, 5 eggs and 4 hamburger patties so Ella gets some.

eta: I usually have some leftover smoked meat in the fridge for when hubby grills ribeyes or filet mignons… drawing the line on sharing that and there aren’t leftovers anyway LOL. But Ella gets her keto snack even if not steak.

Ran out and picked up a Rotisserie Chicken for lunch… 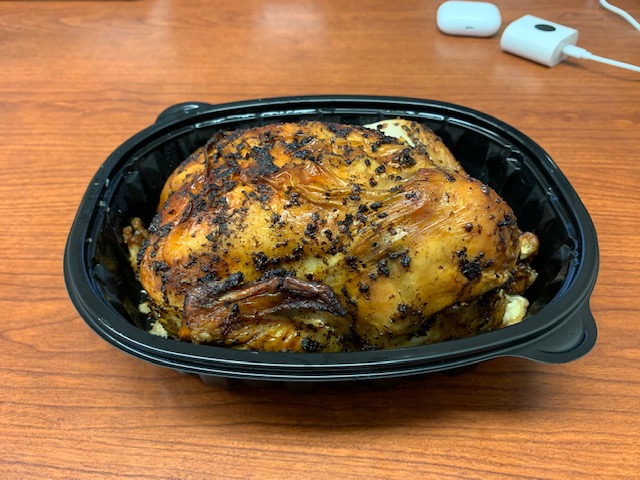 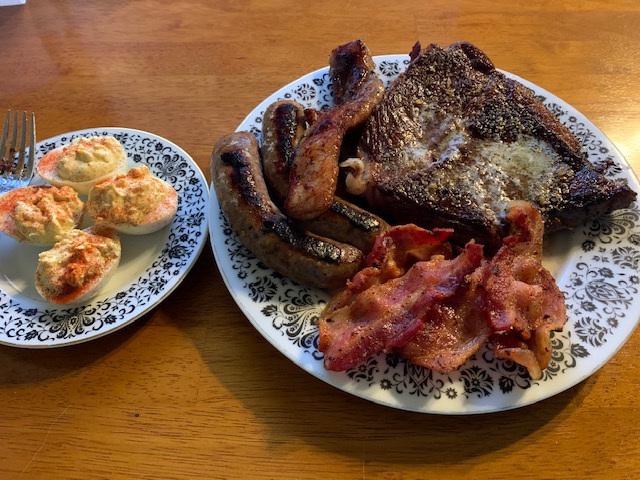