Hope the knee gets better soon DDave, hang in there.

Thank you, Ma’am. It is indeed feeling better already. 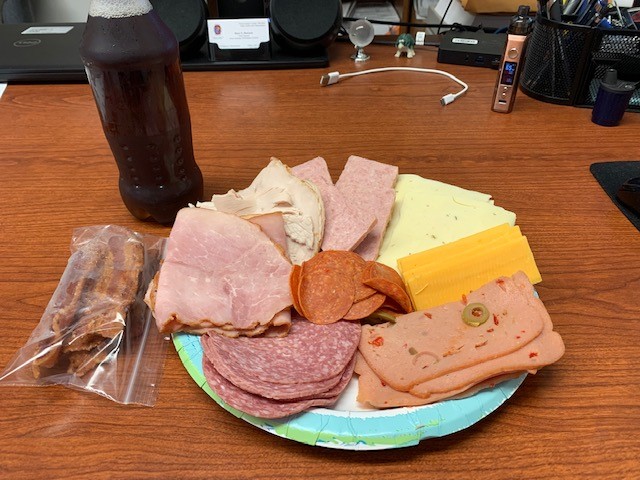 24 hr. Sous Vide 20 oz. Top Sirloin, with some Fried Onions and Mushrooms, and a side of Butter Fried Brussel Sprouts. Wife also put a little Mozzarella Cheese on the Brussel Sprouts. 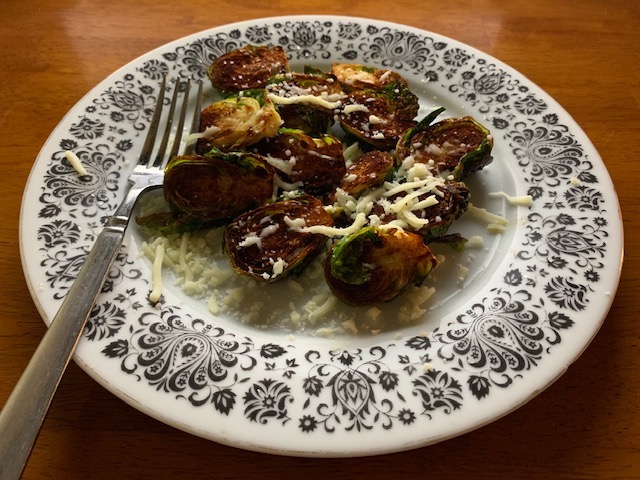 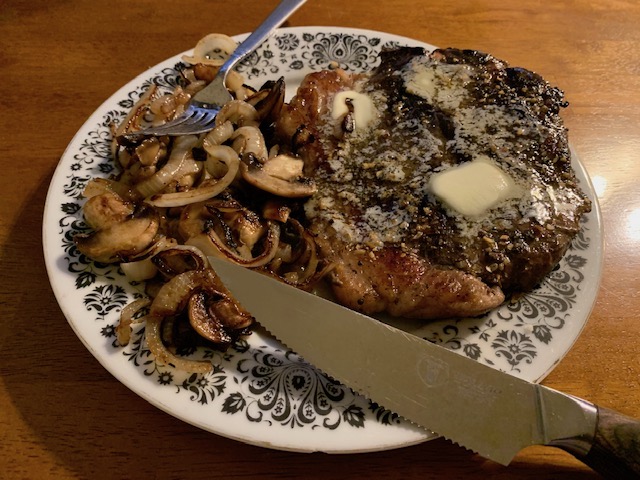 I’m working on my own knee strain at the moment- nearly better. Didn’t actually get it seen to but found some good advice on how to rehab an injury back to full use rather than get stuck in the Pain-Rest-Weakness downward spiral. Very happy with progress, says I while chewing on the knee joint of a ruminant and getting a bit of articular cartilage off with my teeth

Today’s soup bones well cooked stew - first bowl with fob of butter on top. Very satisfying after a maximal fast (for me) 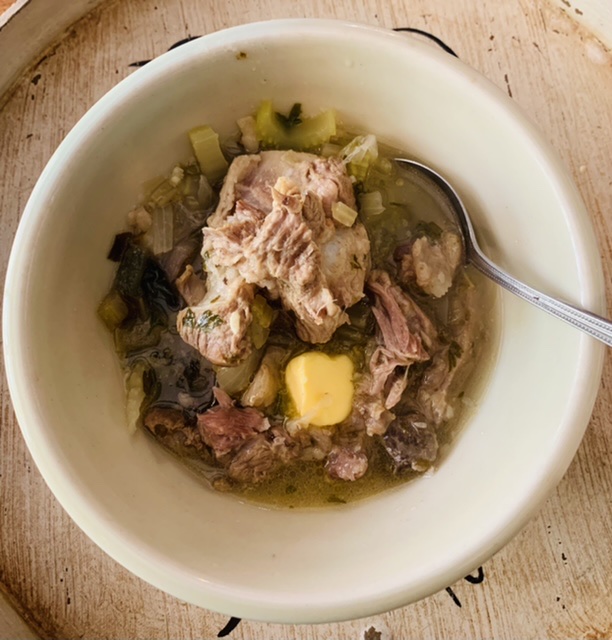 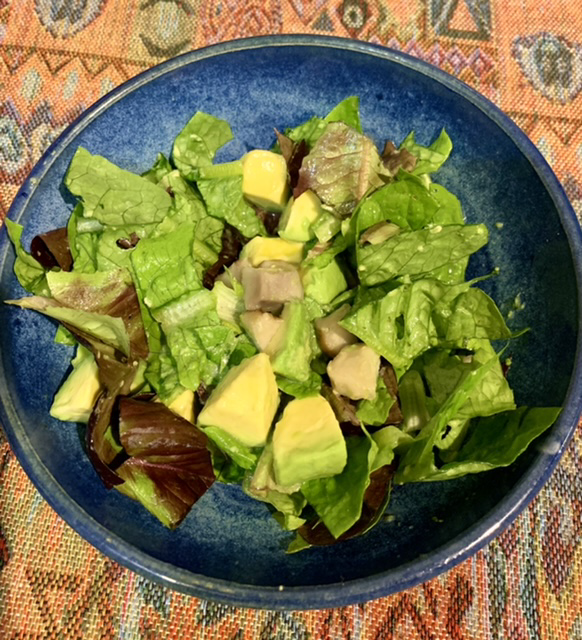 Later I had a salad which, excepting the avocado, is entirely from my garden. And I threw and glazed the bowl. Homesteader skillz

Oh so jealous! Do you have your own wheel and kiln? Such joy…. 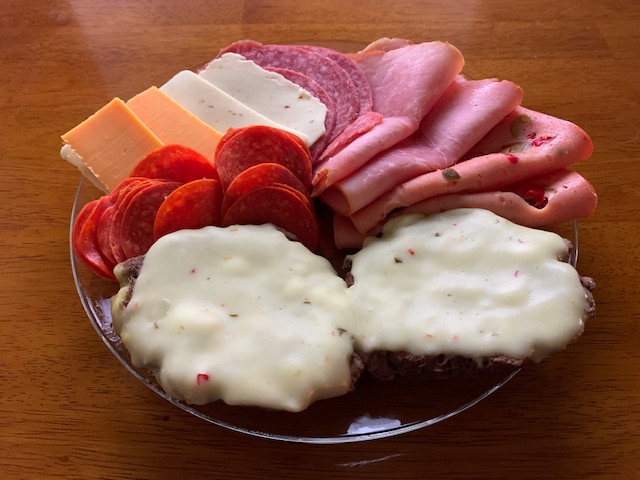 Dinner last night… Roast, Mushrooms and Butter Fried Brussel Sprouts. Then melted butter and poured all over everything. 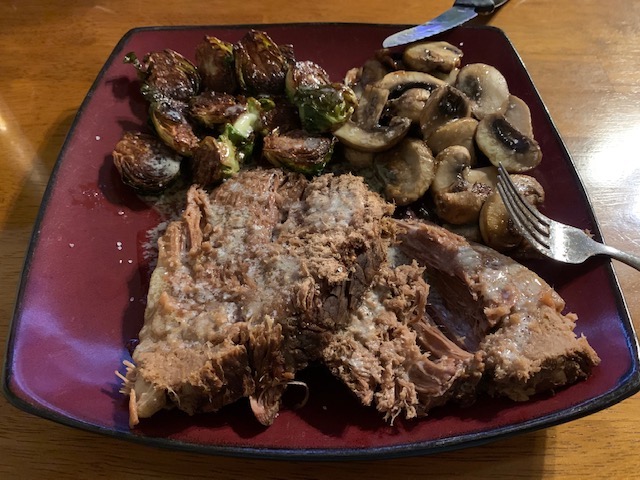 Decided to make something for lunch, and maybe Fast some more this week… 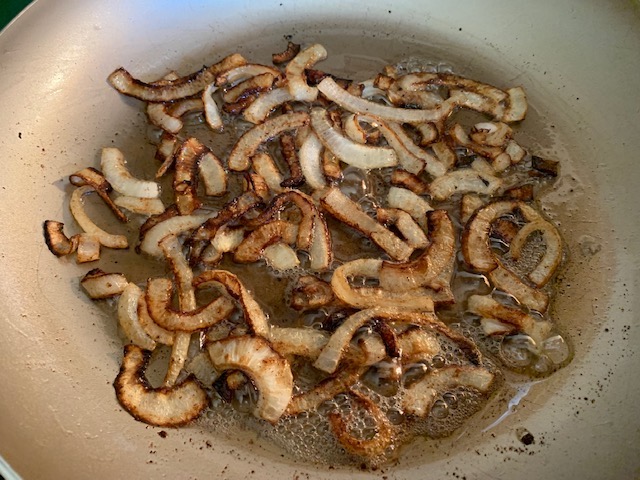 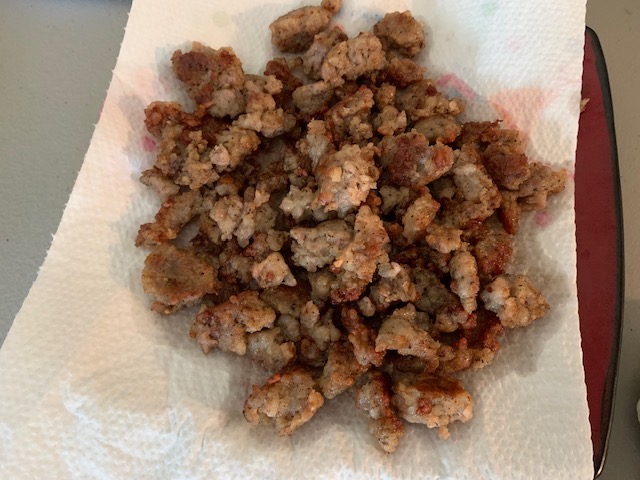 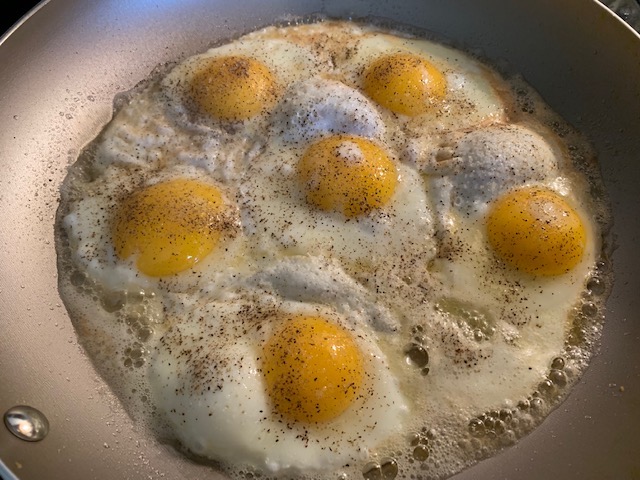 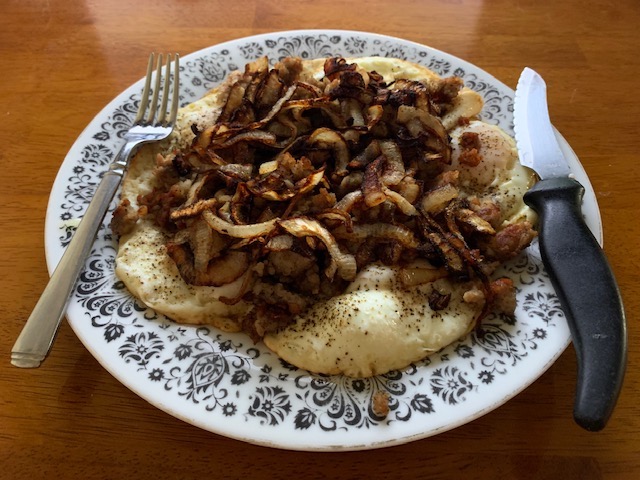 Also ate a Peanut Butter Caramel Chip Rebel since I hadn’t had one in a bit. 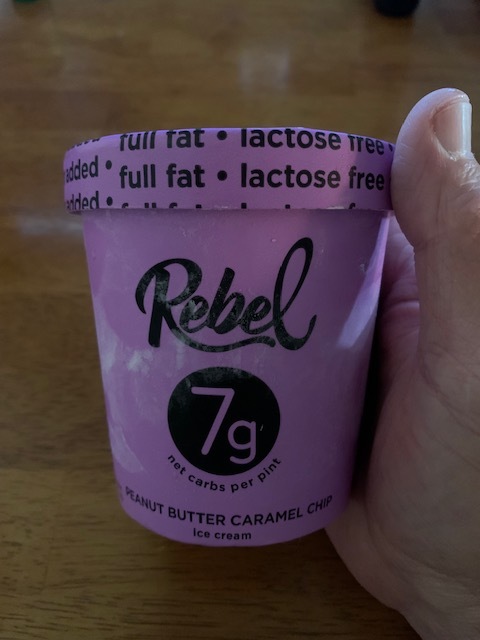 Dave, I am very curious what your average intake of calories is. I have found that to keep slowly losing weight I need to stay in the ballpark of 1400. I see so many huge meals on here, that surely are much more than that. But probably taller folks. I’m 5’7” and now 160. Ten to go, but maintenance is my main goal, so slow is fine.
But still curious.

Honestly Robin, I have absolutely no idea.

I’ve never counted calories myself, ever. I only stay under 20g carbs daily and this has always worked for me. I can tell ya that the meal itself was 20.6 carbs, since I added the Rebel at the last minute. … Wife asked since I was Fasting again this week, if I wanted one since I haven’t been eating any lately. So decided to get one today.

It’s always been mentioned that my meals may be a wee bit big?

… Ok, they are generally quite large.

But to be honest, a lot of days I do OMAD, or two total. But do also like to eat those things that are low/to no carbs to begin with. But when I do go above 20g a day, it’s no more than 25c. I will generally throw in Onions and the like here and there, since I do like them. But I also forego them at times where I won’t eat any for months. I just like to throw them back in once in a while.

But can also honestly say that I never feel bloated after a nice big ole’ meal like these… Back in the day, before I switched to this @WOE, I could eat sometimes even half the size of these meals and feel quite crapy shortly after. Such as one might feel after eating a big ole’ Thanksgiving meal with the works. Ya know, where they sit back on the couch, loosen there belt to breath easier, and then act like they are watching something, or listening to folks talk, when they are really just falling asleep.

As I mentioned, I’ve been Fasting 60+ hrs. for the past couple weeks, so this too is a nice change. But I feel that overall activity levels has the most effect on things. (At least it appears to be) From the times I get stuck in my office behind the computer all day, or getting out and about in the field. (Which includes my Hunting too. It’s a 0.65 mile hike from my house each way, with all my gear.) I do believe that these sorts of things are/can be game changers as to how I feel, or seeing results.

Thanks, I appreciate that insight. I also don’t count calories unless I notice a prolonged trend up or down. I never ever go over 20 g carbs. usually well under, especially since I cut way back on dairy. I was just curious. Those meals look like something for the The Hulk! Lucky man!

I never ever go over 20 g carbs. usually well under

This is me most times too, since a lot of my meals are mostly meats. … But I do like to throw some things in from time to time, since one, I do like them. But two, I also like keeping things mixed up.

I just don’t like limiting myself in any aspect, and this includes anything I do with this WOE. Whether it’s meal sizes, types, Fasting, etc. It’s one of the things I’ve always done since starting this WOE & works.

I’ve always thought of it as the body will/can adjust to any sort of scheduled routine regardless of what.

I’ve noticed your big meals too, Dave. I think you go from very big feeds to very big fasts, with days of long physical work sometimes. You appear to be the opposite of a grazer. When it’s time to eat, you really feast so you can last until the next successful hunt. Like a warrior hunter!

I’m cooking 3 good sized lamb grilling chops. I think I’ll only get through 2 of them for this first meal around 1pm. I’m so ready for food after a very active weekend with more fasting and less food than normal. Kind of a pseudo fasting 3 days

I’ve noticed your big meals too, Dave. I think you go from very big feeds to very big fasts, with days of long physical work sometimes. You appear to be the opposite of a grazer. When it’s time to eat, you really feast so you can last until the next successful hunt. Like a warrior hunter!

Yes Ma’am, definitely NOT a grazer.

Yeah, folks have always commented on my meals’ sizes since joining these forums. Hell, I have one image I posted back in May of 2019 that still gets hits from time to time!

It was an OMAD at work, and yep, some meals are even bigger. It was also the first post when I created the ‘third’ What Did You Keto Today thread. - But I’ve always had a saying since I started this WOE… When I eat, I eat. I Don’t Snack. (Ever) So yeah, a larger meal for me works well, and believe me, I don’t have any desires to snack between said meals. And you’re right, sometimes they also lead me to doing quite a few longer Fast. Does it help me with those as well? I really can’t say for sure, but Fasting has actually always been quite easy for me, to which I am very grateful. 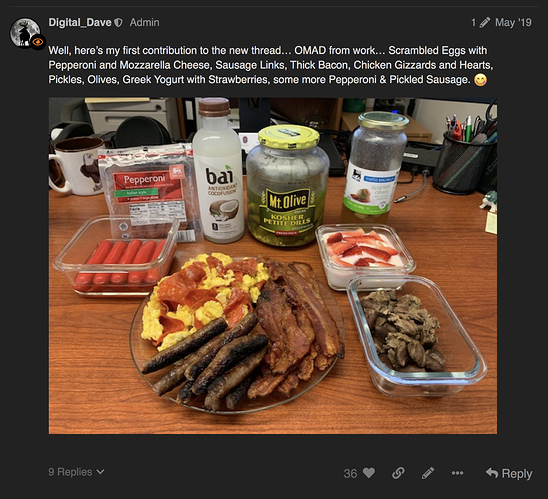 I also just started another Fast at Noon today, so just at 10.5 hrs. presently.

I was about to give up halfway through my second lamb chop (with melted butter and salt sauce) when, inspired by BeastDave, I cracked on til the end. Bones are gnawed and put away for broth, and a nice cup of tea with creamy jersey milk is brewing. Aaaaah feeling properly fed after a big weekend! 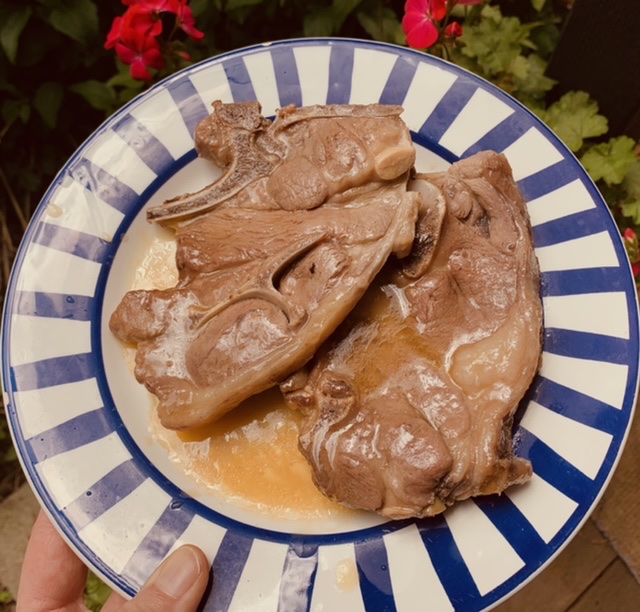 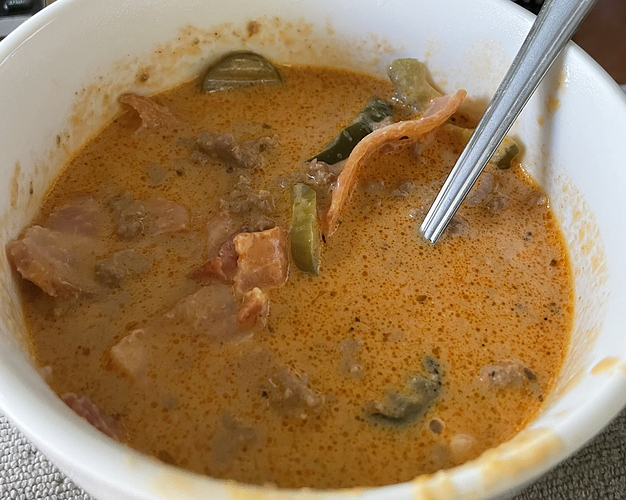 Well, hello! That just stopped me in my tracks…

What is cheeseburger soup!

I speak for everyone here!

Cabbage with slow cooked lamb (it’s hiding) with salt, butter, lemon juice and pepper. I’ve also grazed this morning on raw cabbage, a carrot, 3 cups of tea with milk. Having my first meal at 2pm after some good exercise, so I’m likely to eat a second serve and probably some other things afterwards. 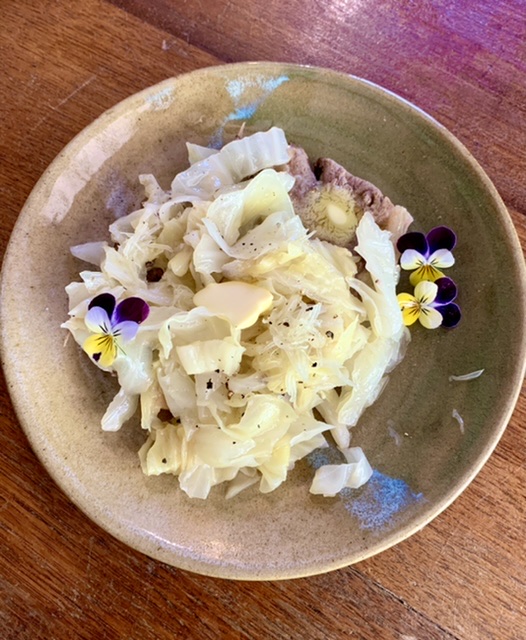 I knew not to eat the violas this time lol

Oh so jealous! Do you have your own wheel and kiln? Such joy….

No never have. It’s been years since I’ve done any. I used to visit a community crafts hub, they had all the gear. It still delights me to use my own bowls and teapots. The cups have mostly cracked and died by now. One day I will get back to it again, I really loved it!

It’s basically a fatty creamy soup in a bowl with hamburger and bacon and cream cheese and heavy cream and broth. I also add pickles in when I make a bowl. Here’s the recipe I use