Those photos are so big they won’t load, but it sounds delicious Janie! Maybe the thread getting Big.
My 4 egg with semi stolen rocket cooked in leftover lamb fat, a little ferment juice to taste. I’ve already have a lamb chop in fat and aspic and some veg. It seems to be a big breakfast day after a few excellent fasting days 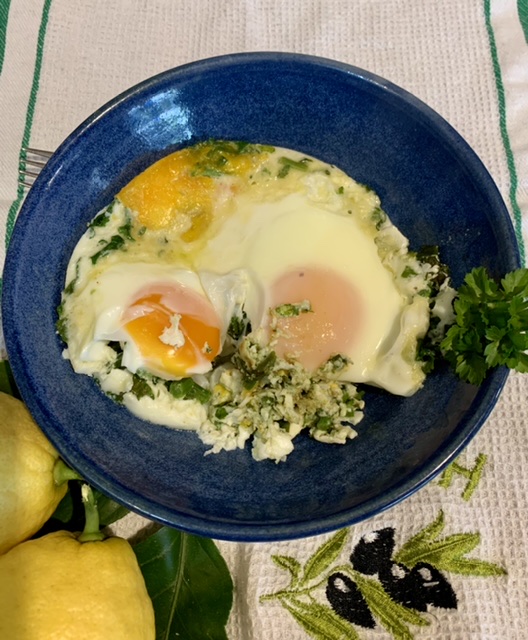 I think I will be getting that serving platter! Much easier to allot specific foods and you can see exactly how much you are consuming. 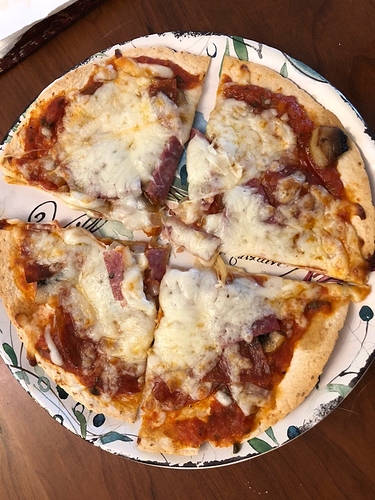 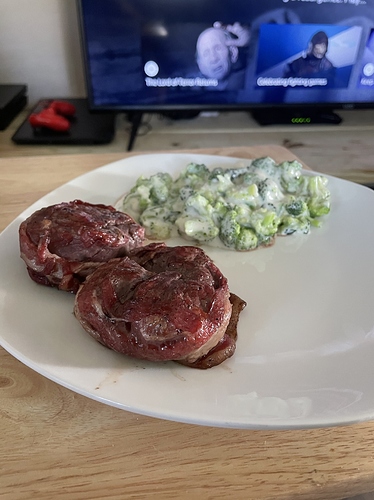 My first two days of keto breakfasts in a while: scrambled eggs with feta, spinach and smoked salmon; homemade chicken and vegetable soup (probably a bit carby, but I love winter veg in a soup). Both accompanied by coffee with MCT oil/butter. 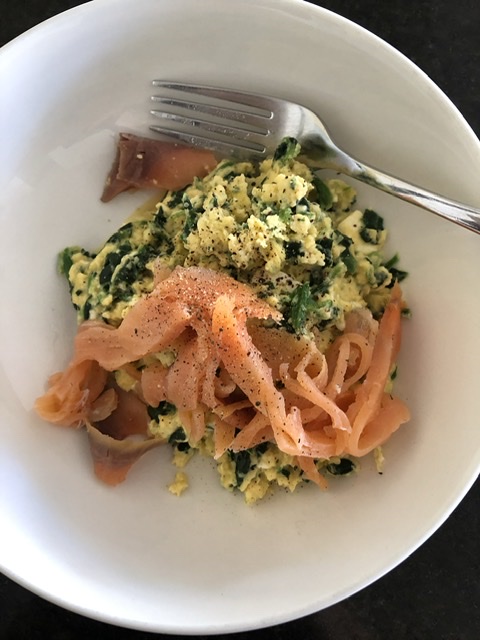 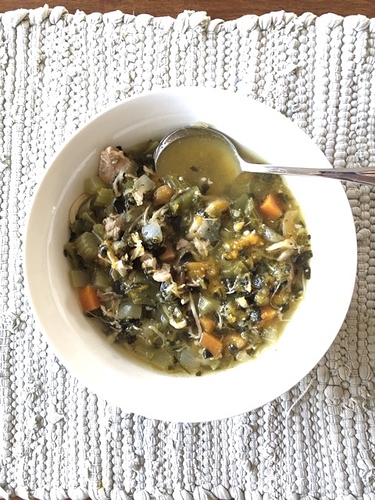 Chipotle’s in Round Rock, TX 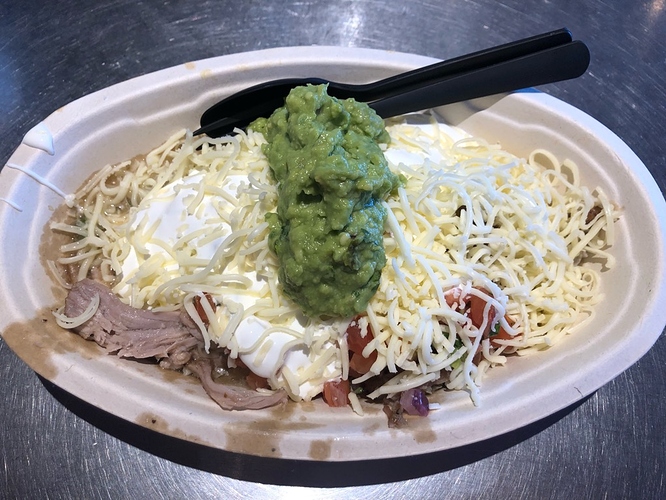 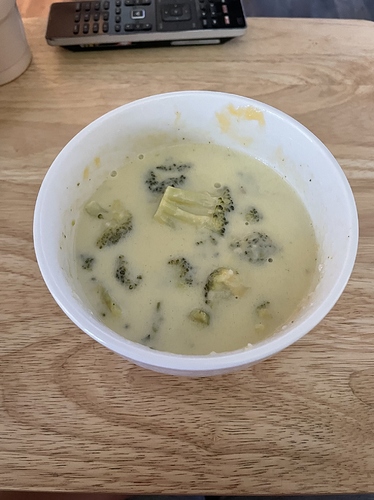 Cauli-egg salad and kung pao chicken. Salad doesn’t really go with the main dish but needed to use up some eggs.

The kung pao sauce is from the processed food aisle so we don’t have it very often but is a nice change-of-pace. 10g carbs per serving. 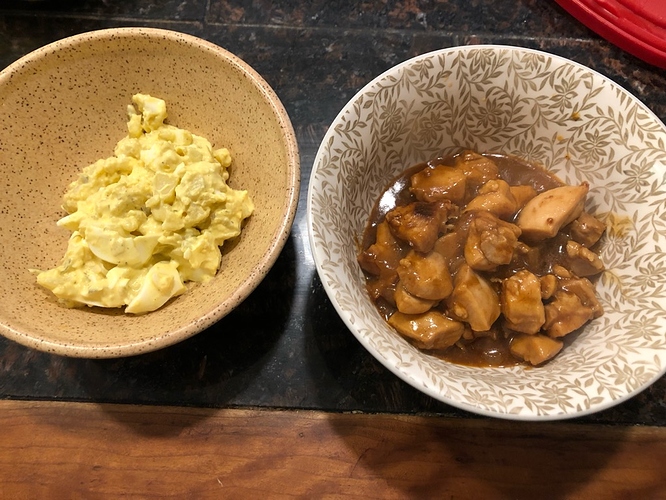 Dave, can you tell us about that breading on the chicken?

I was so busy chopping down a tree and cutting it up along with other garden jobs that I had one of those amazing, high on ketones, hard work mornings that went on and on until I remembered I had some chicken soup that didn’t fit in the fridge last night so I had better heat and eat ASAP. A 19 hour fast in the bag (I aim for 13 or more daily) makes it one of my longer. Before eating I made a dessert for the neighbours who have been convinced

to give up sugar.

What a life this is eh?! 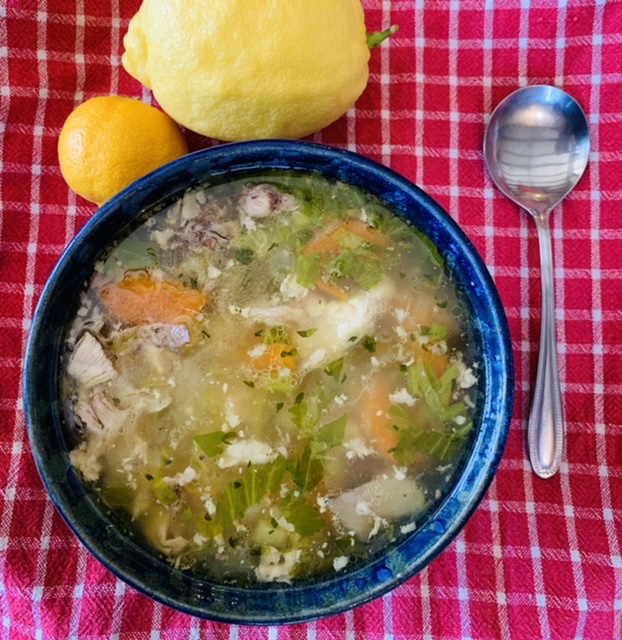 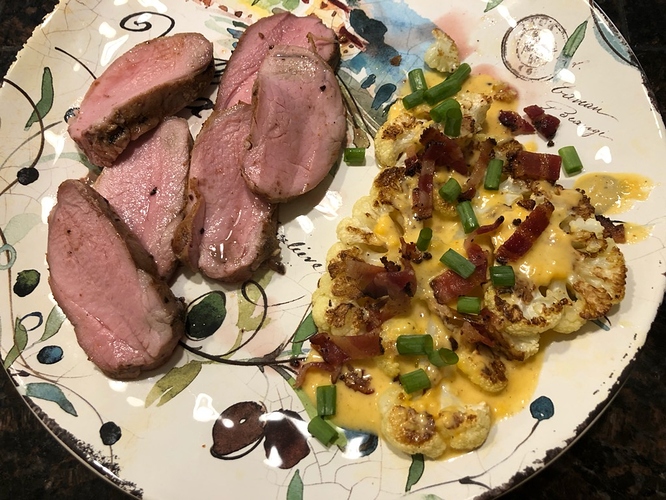 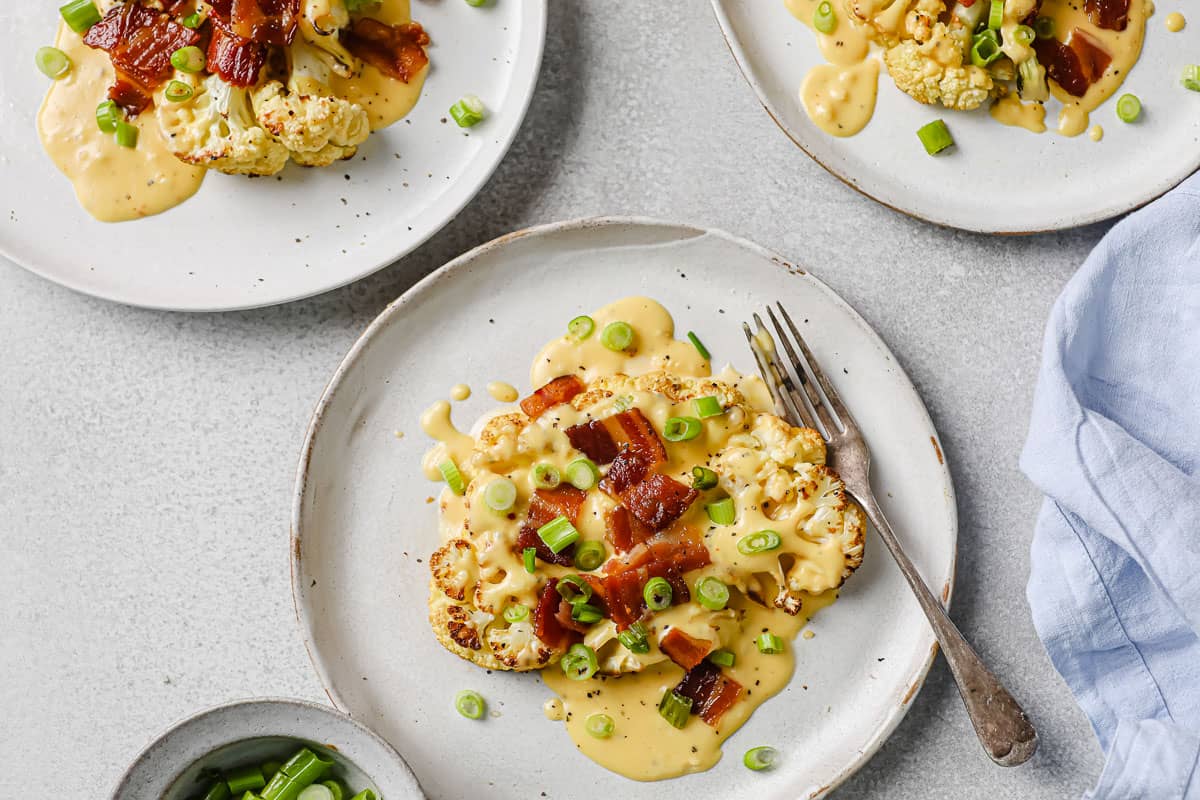 Roasted Cauliflower Steaks with Cheese Sauce - seasoned cauliflower, roasted, then topped with a rich and creamy cheese sauce and bacon.

Today there is a little steak icon by my name. The only thing I can think of is that it is my forum anniversary??

Yes it’s your forum anniversary. You also get one on your actual birthday. Happy forumversary!

Why thank you Monsterjuice! I can see the little candle now

I almost never make a photo of my food, it’s often the same anyway and I have no idea about my complete meal before I finish… It’s just the first part of my first meal of the 4 yesterday: 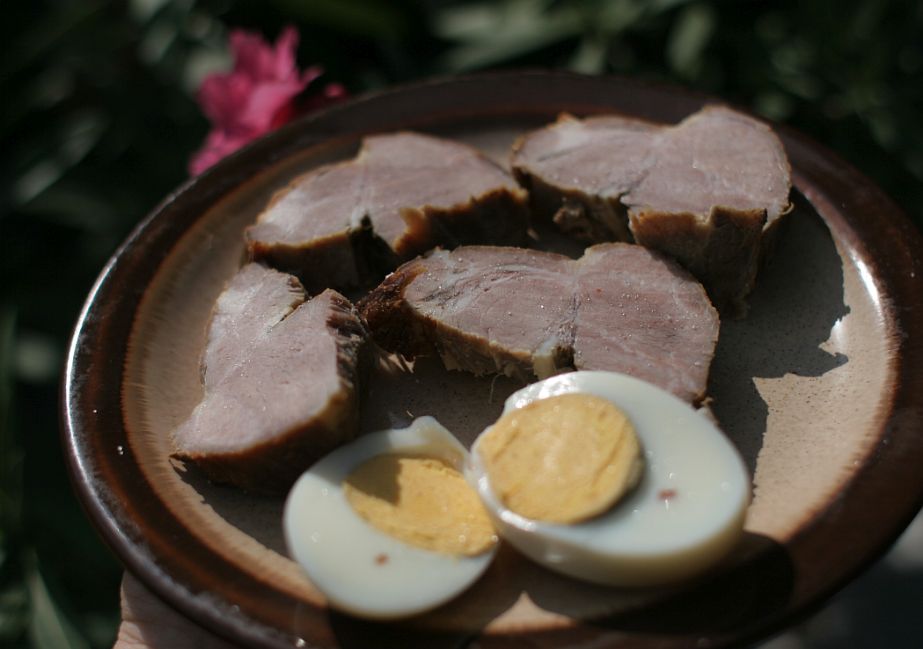 Not a good photo but I will never do it right with food, it’s good I don’t care about it much.
Cold pork chuck roast (but I warmed it after some while. I like it both ways but tender warm fat is usually lovelier) and obviously a boiled egg. I ate some more of the same things when it wasn’t enough. And got hungry an hour later, oh I have those carnivore times again… I expect that from a tiny lunch but 900 kcal, while pretty small, not THAT tiny… Oh well.
(My meals got smaller and smaller as time passed so I ate around 1800 kcal in the end. Vaguely. Pork chuck is impossible to track as its fat content is unknown and it even loses some in the oven.)

I planned a very strict carnivore day but felt a bit odd and added my usual super tiny harmless things BUT I keep staying away from dairy as much as possible now (I have about 20ml 10% cream in my coffees). And no added fat. I suspect these are my problem items that make sure I never lose any fat on keto (it doesn’t help off keto either but I blame the carbs more there. carbs are to blame on normal keto too but I don’t do that, I do carnivore-ish, mostly. with fruits in summer as it’s impossible not to add them then, here and there. But carnivore helps with that too, I barely ate from our super tasty pears this year, I felt no desire, no matter if it was the tastiest thing in the house. taste matters little to me when I don’t feel the pull at all.)

So my variety dropped and it’s an odd feeling but I am glad I don’t need meals with MANY courses, it’s bad enough I have so many meals… But it’s easy with meat

I roast enough for the whole week (as I need to take breaks, I can’t just eat much meat every day! and definitely not pork every day, no matter how I like it).

I overcooked this some cause I was on the phone. But it’s still super soft so I’m not too sad. Still no sauce needed. Smoking it is my favorite way even when I overcook it some it still tastes great. 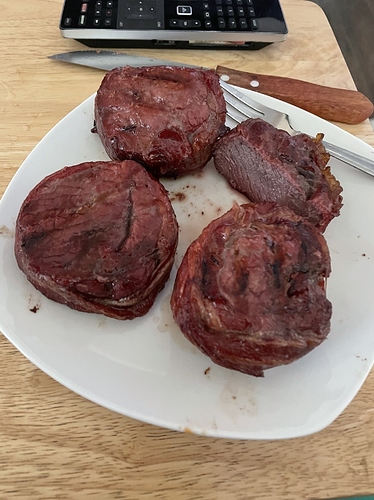 These were actually Chic-Fil-A Chicken Breast, so not home made and just their regular light breading on their Chicken Sandwiches. Would have been better with Grilled Chicken for Keto, but it had been a while since I’d eating any breaded Chicken, so decided to just have a few since they aren’t too bready.

Andouille sausage would have been better but I used what I had in the freezer. Some of the first link sausage I made and wasn’t crazy about it, but was good camouflaged in the jambalaya! The “rice” was Shirataki.

Peppers from my garden - hatch chilies I think. Speaking of garden peppers…… I needed a bell pepper for my jambalaya and it looked perfect on the outside - no holes at all. I cut it open and found a big ole worm inside and the inside of the pepper was black. GROSS!!!

I trekked down to my garden to see what was available and found a beautiful bell pepper ready to be picked. Kinda small like all of them this time of year but perfect size for the portion I cooked. 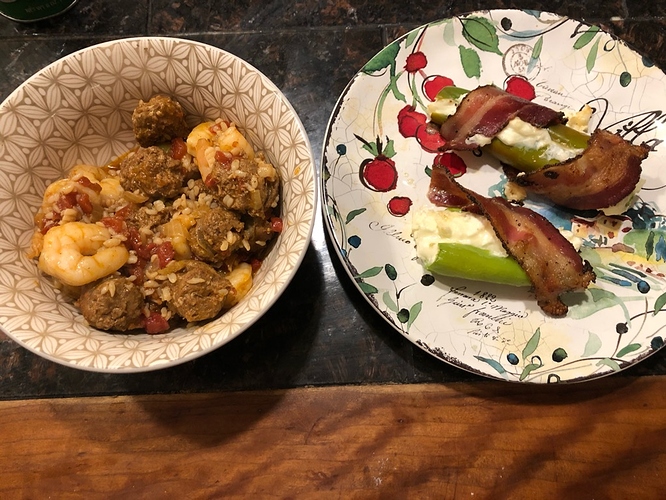 Great story and meal Janie, I’ve had those capsicum/bell pepper moments too, usually a big slug! It’s always funny to read opposite season descriptions here.I’m about to begin raising my tomato seeds.

My breakfast today is garnished with wonderful greens that I got by trading for some pond weed. How lucky am I? And there were a couple of duck eggs because the ducks were grateful for the weed. This plate isn’t quite enough so I’m frying bacon now and will probably have pickles and cheese if still hungry 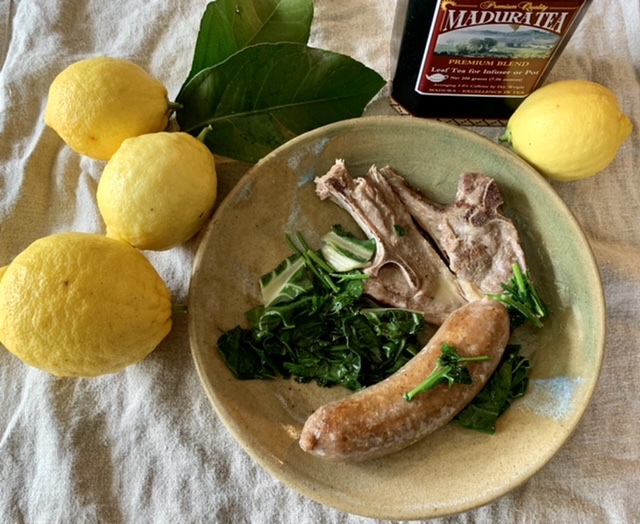 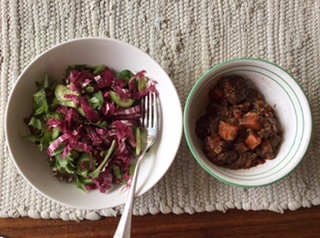 The joys of WFH lunches! Salad with raddichio and lemon / mustard / truffle oil dressing. Slow-cooked beef stew which is exceptionally rich and savoury - I think it’s because I upped the umami by using beef stock, balsamic, soy sauce and dried porcini mushrooms I found in the cupboard, soaked overnight, and threw all the liquid in too… it looked like black swamp water! Delicious. I also browned the bejesus out of that meat.