Wouldn’t let me post this yesterday, so trying this morning.

So there’s a couple ladies I speak with at the Deli at Food Lion, the one nearer to my work. We’ve been chatting about Keto/LowCarb for a little while, and one of them asked if I had tried the 647 Bread, when I mentioned I picked up some Low Carb Wraps recently. Told her I hadn’t, but that I had seen them.

So I decided to have the Wife pick some up the other night, to give them a try. I had only looked at the Italian one, out of the 6 or 7 they offered, but wasn’t sure if the Wife wanted to try one of the other ones instead? But we ended up getting the Italian. … They are all 6 carbs a slice, so it’s manageable, if one only eats them from time to time, and with mostly meats or other low carbs stuff. … But it wasn’t too bad even though I was never really big on bread before Low Carb, but prefer wraps myself instead. 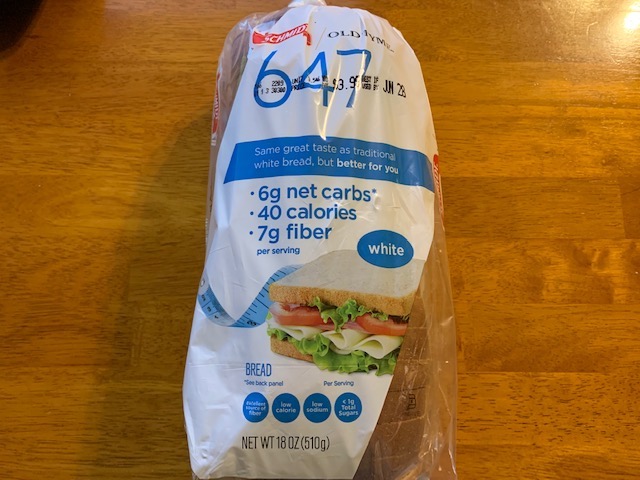 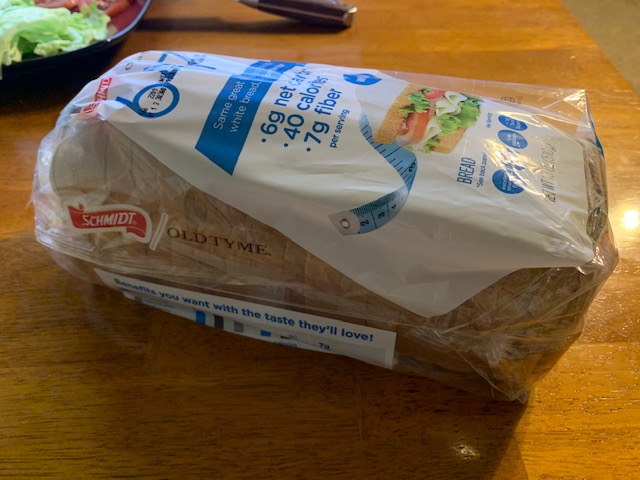 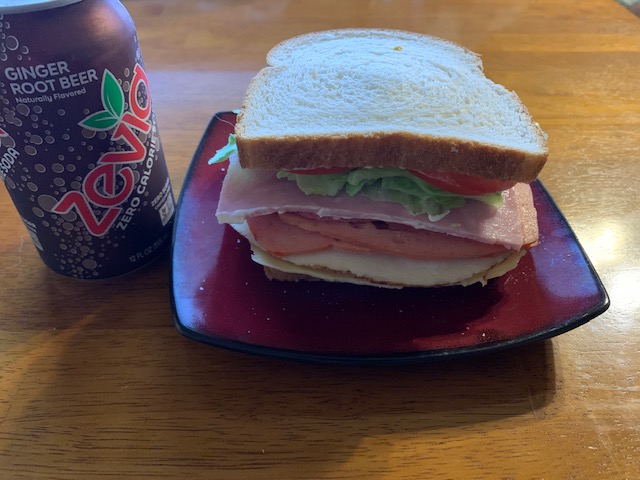 Dinner was, well, quite good. … Texas Road House - Porterhouse Steak, with Mushrooms, with extra Mushrooms, and of coarse, more Mushrooms.

I still have two containers for tomorrow. (One is shown in the pick, the other was off to the side. But they give you quite a bit. And I had two ribs, since they had sauce already on them, and I didn’t want to eat many not knowing the Carb count. 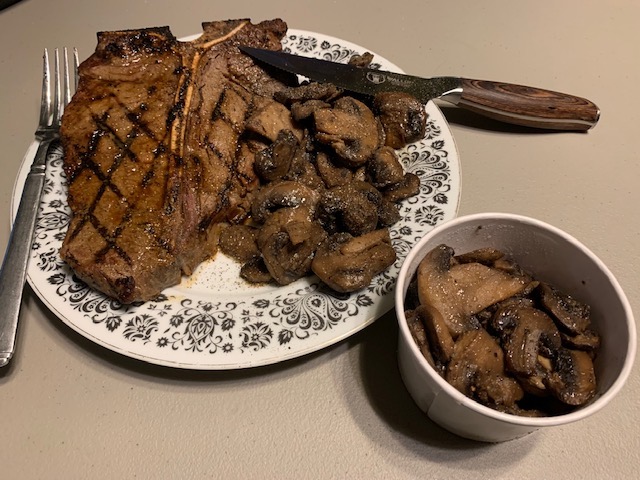 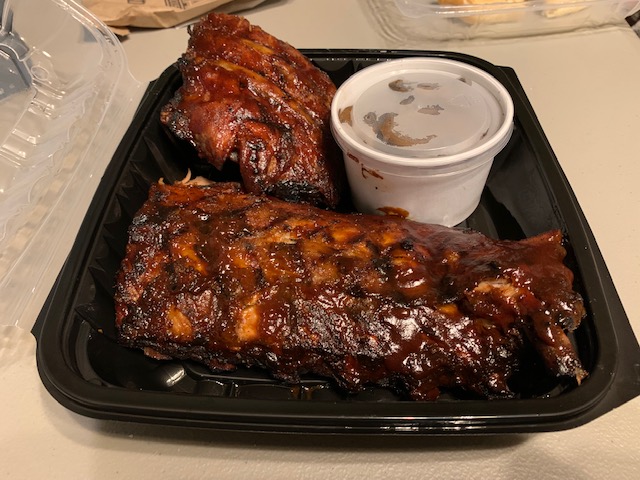 Lunch… Not wanting to cook up a bunch of stuff, especially still having plenty of lunch meats, went for another sandwich. Similar to yesterday. All the same meats. Plus ate some Almonds, Pecans, Walnuts & Pumpkin Seeds. Few of each, and not a bunch overall. Also needed a knife to cut the sandwich. 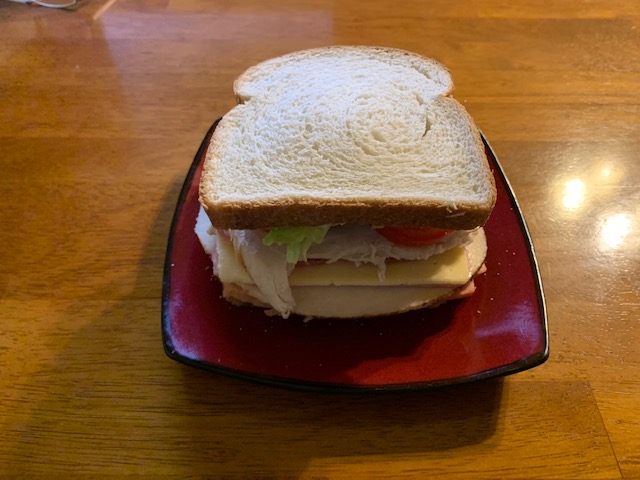 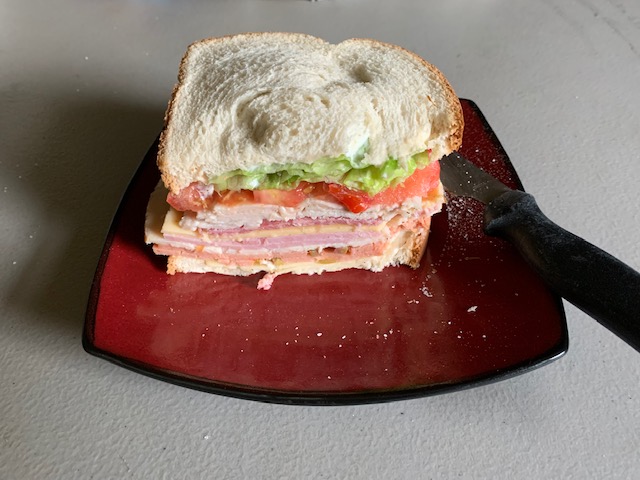 Also some stuff I didn’t eat, but were part of some orders I’ve had the past couple weekends… Just two of the Cheese Cakes, one Strawberry and the other Country Apple. The other two were Cherry. Still wish I could somehow make up a nice sauce to add some Apples to the Keto version of this cake. 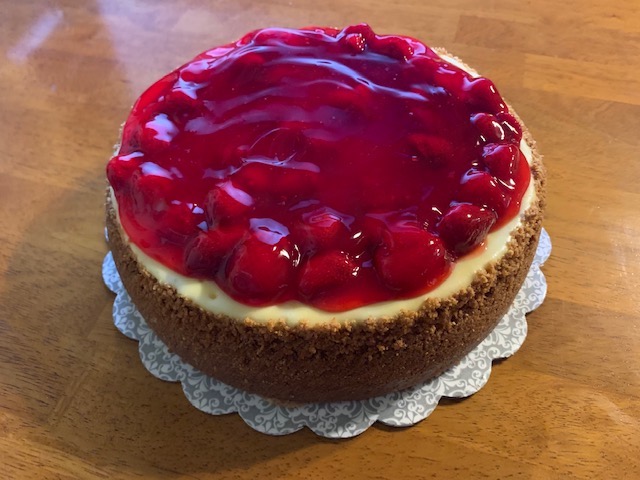 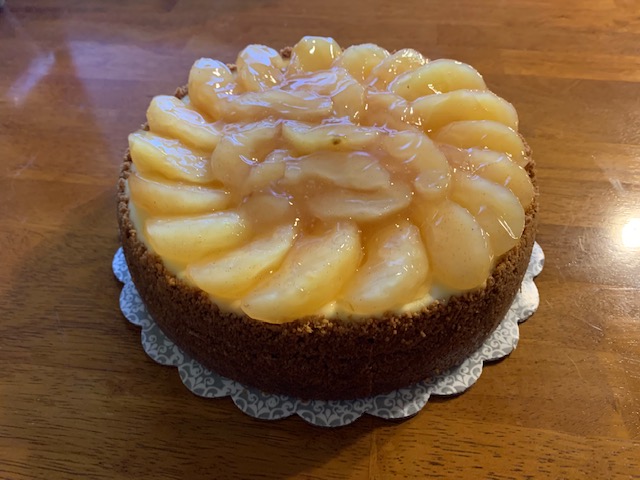 Dinner… Couple Burgers hiding under a bunch of Cheese, Mayo and Scallions. Plus two orders of the Mushrooms from Texas Road House last night, plus a piece of Top Sirloin, Sous Vide and Bacon. 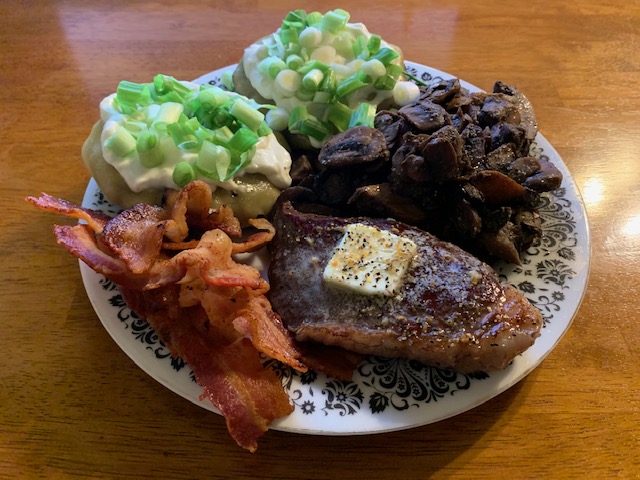 DDave that last post looks delish and inspired my lunch with decorative greens. Was just going to have meat and eggs. I suppose I can forgive you for posting those Cake-shaped-objects!

My lamb eggs avo and I sauce that I spontaneously made up. Since I stopped buying tomato sauce I haven’t bothered with sauces or dressings, but this was good! Garden decorations for garnishing greens and a purple 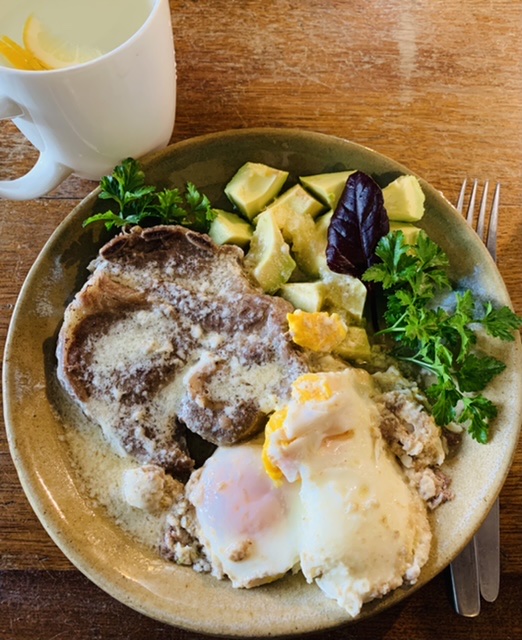 I’ve had good luck with Allulose as a suagr substitute - not just the flavor but it acts almost like real sugar.

Yeah, when I first converted it over for low carb, I was using a liquid Stevia that I was getting and wasn’t bad. But then they apparently changed the recipe, and it now takes 3 times what it used to to sweeten, which makes the $18 they wanted for the bottle less than worth it. … I have heard quite a few mention Allulose too, but haven’t tried it yet. I’lll have to see about getting some to try. Food Lion actually has a low carb sweetener that also resembles sugar and is supposed to be a good replacement (especially with baking, since it’s in the same form) but I find it’s only about 1/3 the sweetness. So will search for Allulose to give that a try. Thanks.

I’m still in my fasting window for today, but yesterday I enjoyed 6oz of cold chicken with some Greek yogurt blue cheese dressing and Frank’s buffalo sauce and 2oz of swiss cheese. For dinner I had 3oz of turkey kielbasa, a fried egg and cauliflower mash.

I made fresh cranberries at Thanksgiving with Allulose and the syrup thickened up like sugar. The year before I tried another sweetener and ended up throwing it out. It is almost 1:1 with sugar. We only use it for baking because it isn’t cheap. And these days we don’t do much keto baking, either. 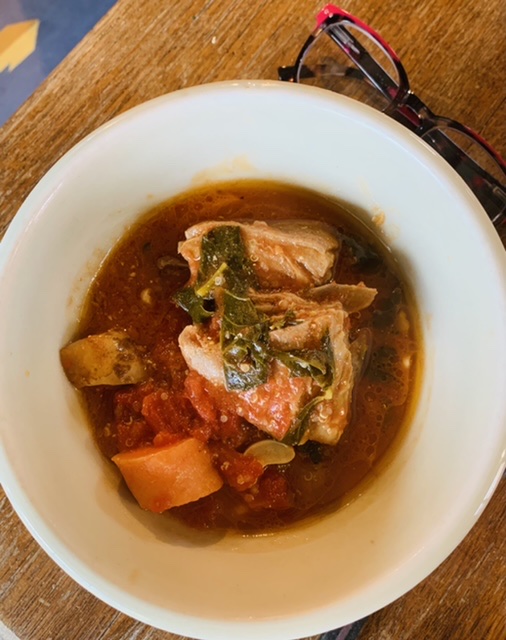 Have you tried their ice cream sandwiches? Dangerous to have around. I’m glad they aren’t very affordable

All the keto ice creams are like that for me. Absolutely delicious and satisfying, but guaranteed to stall me. 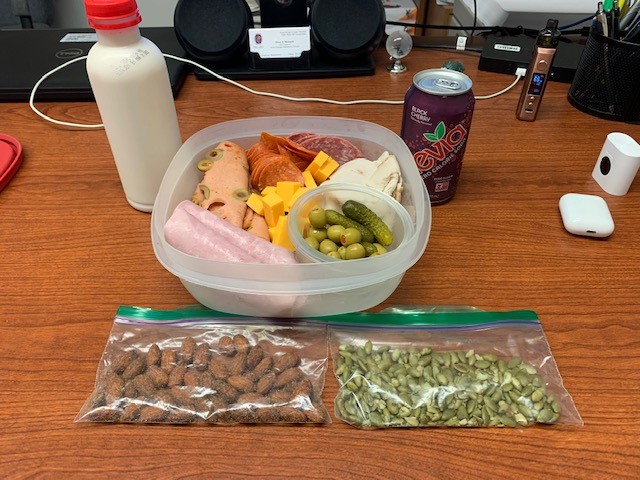 How funny … We had Texas Roadhouse on Monday.

I picked my Ribeye (it was WAY bigger than 16oz … they charged me for a 19oz, but I feel it was bigger than that too), salad w/ blue cheese dressing and a bowl of their chili. (Sorry, no pic)

Yeah, well it’s about the only thing I will get from there. The rest is way too carby, so the salad isn’t a bad kicker with the meal. This time though, I didn’t get the salad, since the Wife picked it up to bring back home where we had stuff to make a salad, and I got a ton of Mushrooms for use.

Last minute decision to run out and pick up some lunch… 1 lb. Snow Crab Legs

Plus two cans of Sardines in Mustard and a Cream Soda Zevia. Also ate some Macadamia Nuts and some Sunflower Seeds. 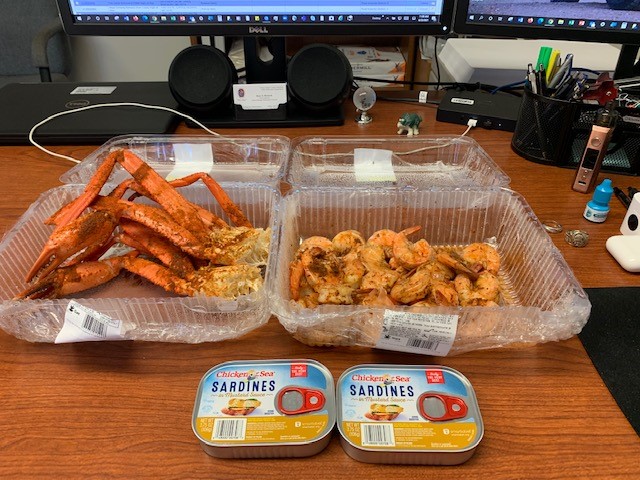 Found a bottle of mead in my wine cabinet that I bottled in 2010 when I lived in Houston and had my hives.

This one was made from ground cherries. They are the size of cherry tomatoes but have a paper husk like tomatillos. I grew them in my garden plot at work. 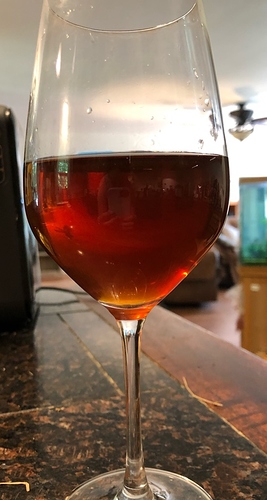 Has an interesting fruity flavor but not particularly sweet. I don’t like sweet wines so I selected yeasts that were strong enough to consume most of the honey and I don’t back-sweeten.

I figured if it had turned into a fruit vinegar it wouldn’t go to waste - would use it on my salads!

Dinner… 3 Cheese Burgers, with Mustard, Ranch and Thousand Island. Along with some Mushrooms. 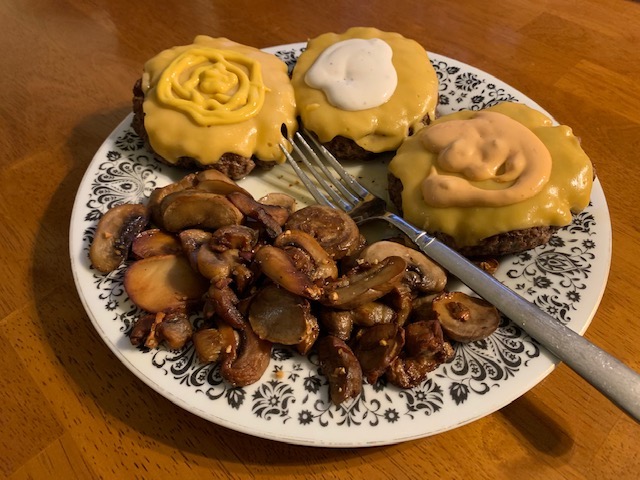 Lately I have been having either bacon and eggs or a low carb Lavash wrap with cheese, salami and a couple of cherry tomatoes for lunch, and cheese burgers with mushrooms for dinner.