I have fun fooling around with cauli-rice too. I found I like it better than rice.

Nothing like throwing together a delicious dinner in less than 15 minutes!!! And minimal dishes.

This is a Sunbasket. Stroganoff. I’ve always had a creamy. Zucchini noodles, spinach, mushrooms and onions. They also had a mushroom powder that had some other spices in it 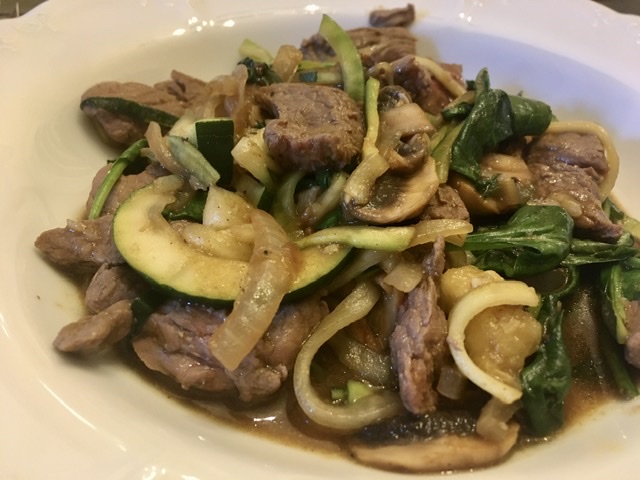 How do you like the sunbasket? Is it all veggies? Many high carb or do you get to pick? I have been interested, but I am adverse to signing up for anything before I see exactly what I get. All these services want me to sign up without having seen the exact offers it seems.

This is vaguely mixed whites and yolks but it’s still very bright! 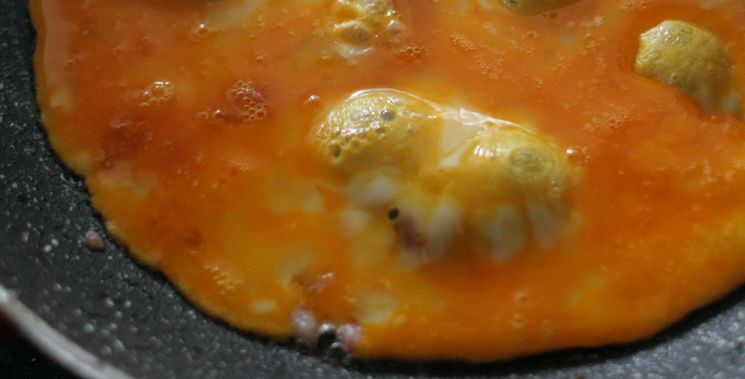 If someone is interested for some reason, I ate eggs today, poached eggs in soup (vegetable soup but I had very little soup with even less vegetable pieces, I don’t need those), eggs in purgatory and pancakes (with cheese, sausage and mascarpone with vanilla and coffee powder). Those were pretty but I didn’t make a photo of those either. I did before, nothing is new but I will make some photos eventually. I actually used up all my quota on spring flowers

And I had a little leftover chicken curry too (I should have written that when I mentioned my pancakes as I filled one with it). It’s amazing how the dry, boring chicken breasts transformed in it, it was enjoyable and I normally doesn’t touch chicken breasts… I am more like a pork shoulders and dry sausage person, you see, lean meat isn’t my thing but there are some exceptions (rabbit stew is awesome, maybe I mentioned before. it was ages ago I could buy some from the usual place).

It was a cute meal (could have been simpler I admit but there were leftover items I had to use), around 1500 kcal, I got nicely satiated. I did OMAD today and this is the minimal size for it, tricky with the not satiating mascarpone but maybe I can get away with it now, I ate more than enough lately.
I didn’t want to track but it’s so easy now and I am curious.

Next time I try to bring some okay photos and less text!

@bjane, I don’t think there are such things as weird combos and correct things in general. If it works for you, go for it, don’t care about closed-minded overly critical person’s opinions and don’t be like one yourself either. So many people have so weird expectations about someone’s meal (even if it’s a stranger)… I am immune to that, I eat anything I want and can alone or in combo. As a kid, I ate mustard as a snack. It was normal to me so I don’t care what is that to others (except I loved to shock people but nope, no one got shocked sigh ).
There are some good ideas how to eat but we are all individuals… We can do differently from about everyone else (tricky with this huge population of the Earth though but only a fragment of them eat keto and there are zillion keto styles :D) and there is no problem with that if that floats your boat. It’s often useful and informative to experiment

I found a local brand of these very orange eggs - they are also quite dense and hold their shape when fried. These are from a special breed of chicken I understand, raised on pasture and without any chemical supplements. They have 225mg of Omega3 and 60 mg of Omega3 fatty acids. They taste better, too. The ones I found are from Wilcox family farms. 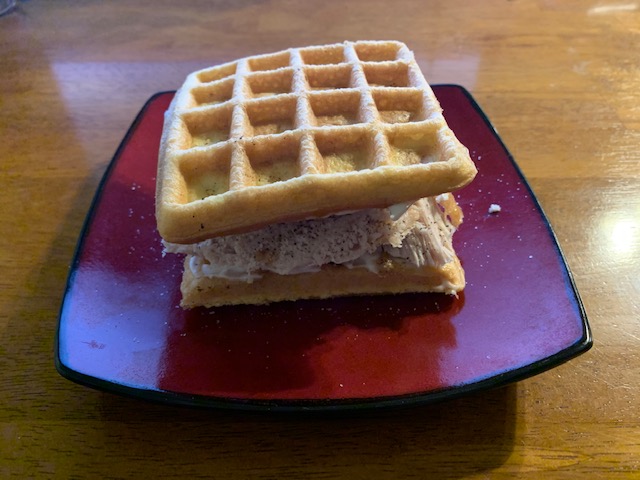 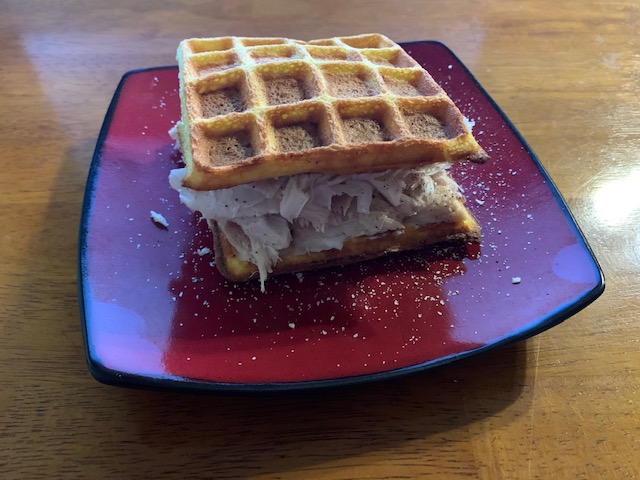 Chaffles are so versatile…

Yep, they are indeed. But I don’t eat them all that often, but get into the mood here and there. - Like now, more Wonder Bread Chaffles w/ Yellow Mustard added. … 2 Sausage Link Chaffle Sandwiches, along with some Chopped Steak and Fried Eggs. - Today’s OMAD. 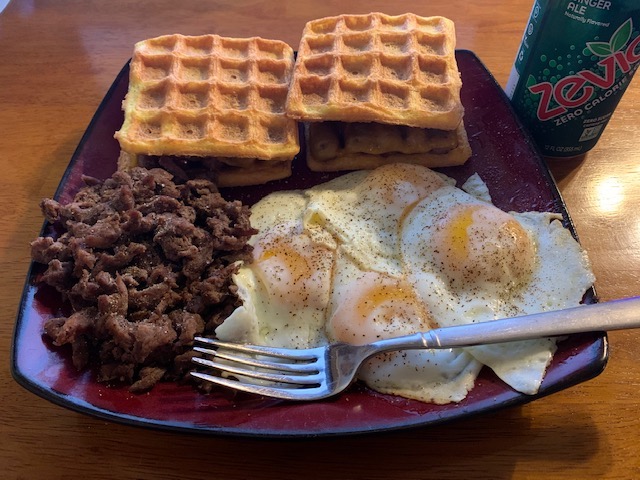 Curious… do you know the caloric and carb count here? (6 eggs, bacon, and sausage… you called it lunch.) Every time I see a photo like this, I think “This is a LOT of food and I don’t have much appetite… BUT, if it’s OMAD and falls in my range, I bet I could swing it. I’m lucky, I don’t get bored with the same old food every day. I can look it up myself, but betting you already know…?

I don’t know more about them. The ones from the houses are normal colored, not pale but far from this deep orange.

I postponed my photo (just by a day)… But I tried a standing deviled egg. It didn’t seem a nice idea (it’s not bite-sized and I end up with extra whites, not like it’s a problem, I love boiled egg whites more than yolks… tracking is more difficult too, getting out the yolk as well) but it sure looked nice… Well, mine didn’t survived me getting out the yolk. I dropped the idea. I barely tasted them, I will make some for myself tomorrow, with bacon on top to make them all pretty for the photo. Maybe I will find my black sesame seeds too, I possess them purely for easthetic reasons

I try to show the entirety of my OMAD tomorrow. With macros and everything. At least the plan, it’s never sure what I actually will eat.

Well, most chickens lay eggs that taste better and have orange yolks and thicker shells when they start laying in the spring. (not factory chickens, they lay year round). Apparently it’s only one breed, kept in a natural habitat, that lays them year round. They remind me of Grandpa’s eggs, his chickens were mixed breeds, he always raised his own and kept a rooster. Really good eggs, and no chicken looked like the other one.

When I kept chickens myself (until raccoons put an end to that), I just got orange yolks in spring.

Interesting… The eggs I buy from houses are normally yellow all year but there is variation. But they never that deep orange, it’s the first time I ever met that color.
The shell has great variety and the size too

Sometimes I grab 2 extemely different eggs and look at them, thinking of the Hungarian saying “they are the same like two eggs”…

We don’t have racoons here, we have foxes and poor ones has problems because the newcomer golden jackals are too adaptable and multiplying like crazy and fox sightings in villages started to become normal (at least in my village). But I live between 2 small villages, foxes often walk in my property as they owned the place, I don’t even get surprised anymore.

Curious… do you know the caloric and carb count here? (6 eggs, bacon, and sausage… you called it lunch.) Every time I see a photo like this, I think “This is a LOT of food and I don’t have much appetite… BUT, if it’s OMAD and falls in my range, I bet I could swing it. I’m lucky, I don’t get bored with the same old food every day. I can look it up myself, but betting you already know…?

Yeah, most of the time, this meal would be an OMAD… but not always.

But it is very low carb overall and something I eat quite regularly. And sometimes just ends up being OMAD, since it’s very filling. - As to Carb Count, the eggs are just .6 per, or 3.6 for the 6-pack. The Gwaltney Sausage patties are shown as 0 Carb. The Sausage links are just 2 carbs, per 3 links. (Because someone likes the Maple Flavor) but the regular ones are just 1 carb per 3 links. … And the bacon is not much itself either, but there are two different brands/types we generally buy. (Really depends on what they have at the moment) But the one brand shows as nearly 0 carbs, with no sugar added. And the other is minimal, being around 1 carb a slice. (Again, due to being Maple Flavor, that the Wife likes

) So that particular meal would be somewhere around 10 carbs +/-, depending on which Bacon and Links were used. 8 Carbs if the lower carb types were used, and just around 12 carbs if the Maple brands were used for both types.

Oh, and as to the Calories, I don’t even think about them. I just pay attention to Carbs myself.

Here’s the information that shows for those brands. We usually just shop Foodlion, since it’s only 5 or so minutes away, and any others are closer to 30 min. away. We live down in the country somewhat, so the choices can be limited, but we find the Foodlion hasn’t been bad since we moved here 13 yrs. ago. 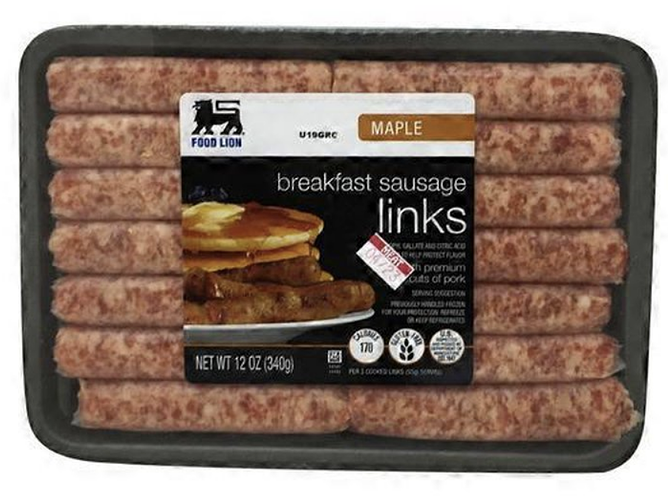 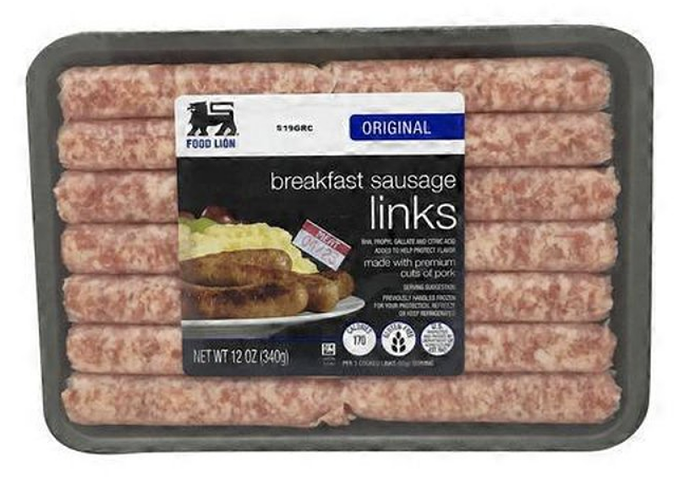 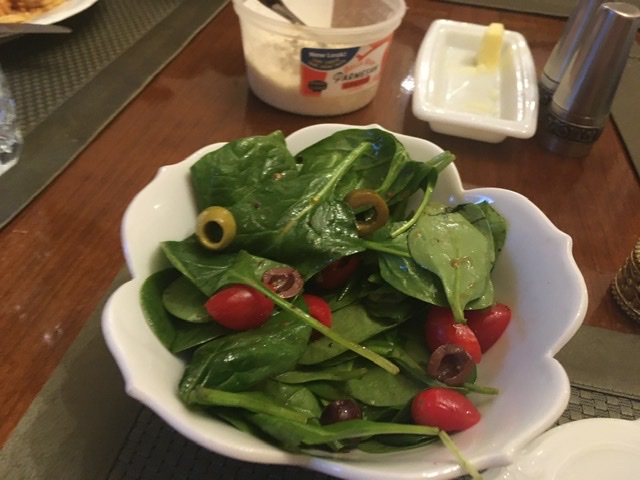 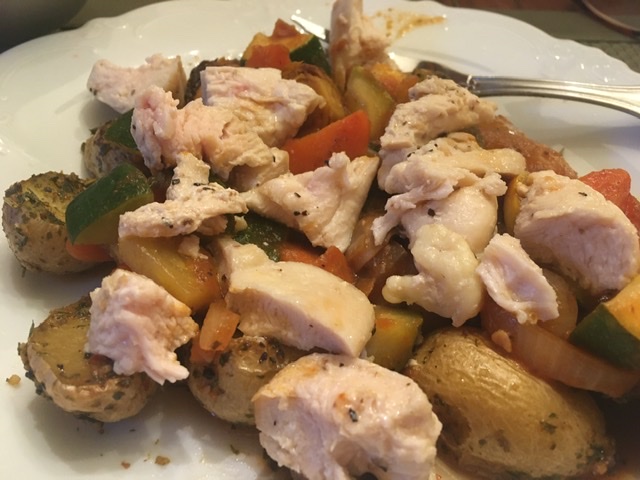 Vegetables and chicken in a little bit of salad. Man that’s a sad looking butter dish. Time for another stick of butter

Yolk colour depends on diet and the amount of veggies they get. The more green leafy stuff they eat, the more orange the yolks.

Well, mine were free range, and they did eat more greens in the spring, then more bugs in the summer and greens again in the fall. The yolks were deep orange in the spring and then got paler as the year went, until they took their winter vacation from laying. 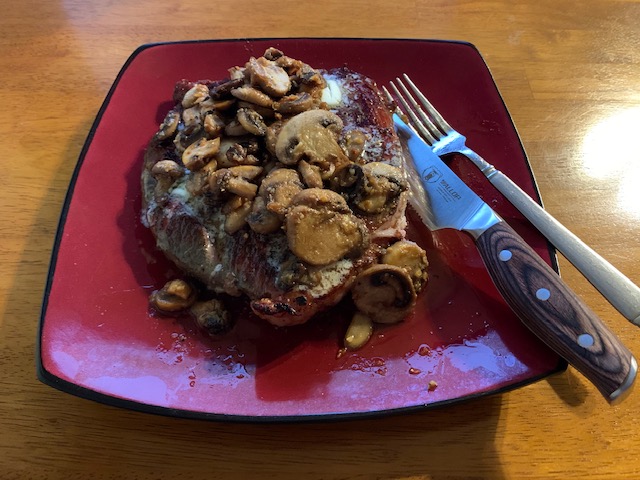 Pieces of fish on a bed of things I’ve grown. Lemon vinegar salt and olive oil dressing. It was crunchy and delicious 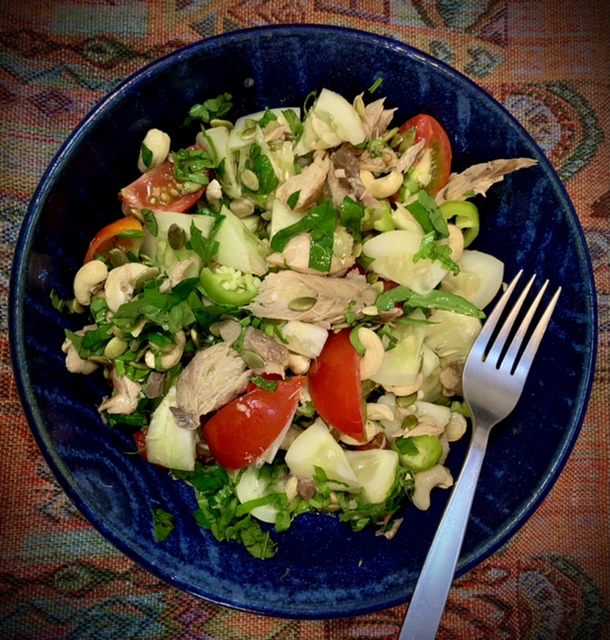