Ok you just sorted out what to fix for dinner tonight!

Lunch… Had 5 slices of Bacon, while the Seafood was cooking. Dungeness Crab and some Shrimp. 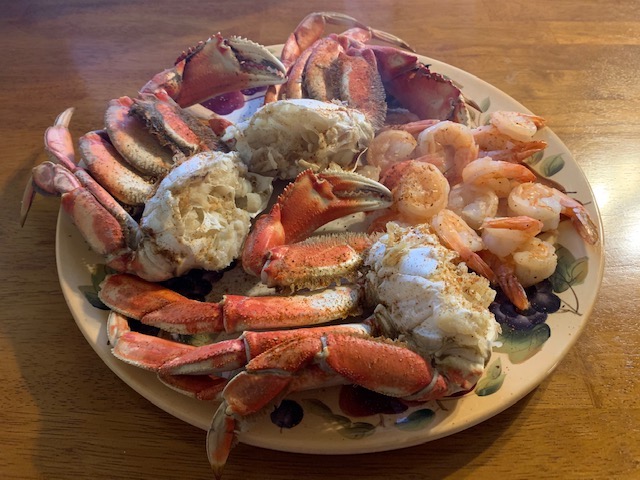 Did it really take 50 min at 375? Seems like a long time for thin chicken breasts - even stuffed.

Dinner… Sous Vide Steak and Bacon Salad. After eating the seafood earlier, which can sometimes be salty, I ended up eating a Salted Caramel Rebel. 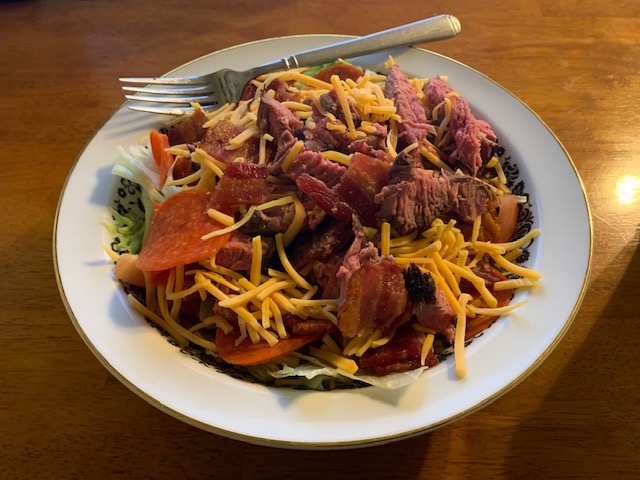 @kyarn stuffed chicken. I added sone diced onion to the mix and added Alfredo sauce to the top 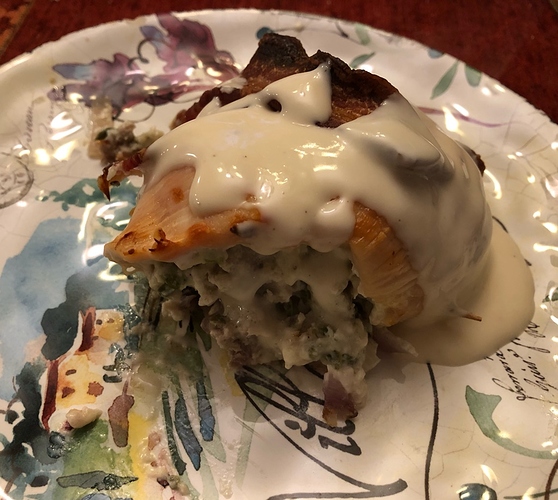 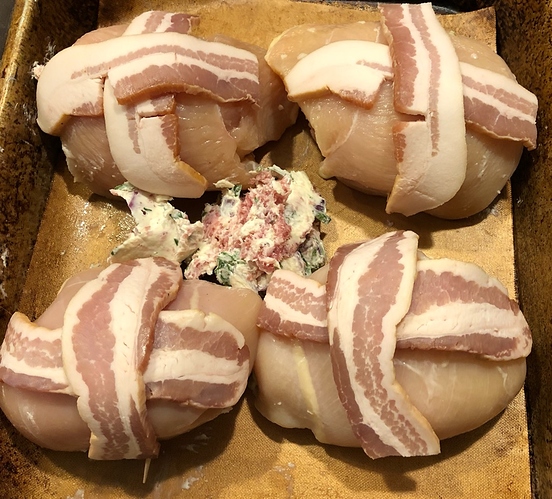 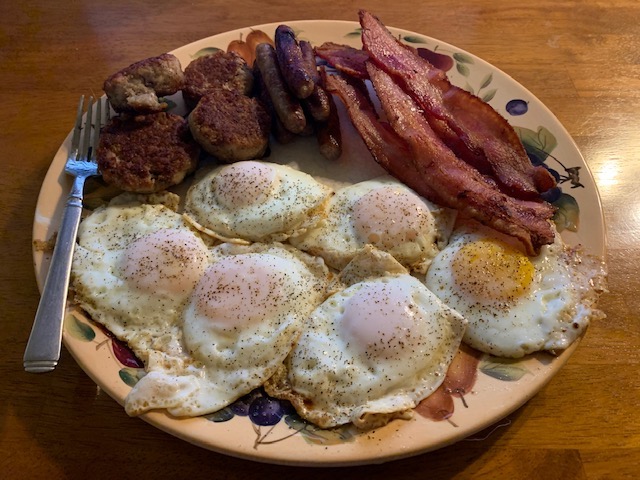 OK, most useless post EVER, but I ate the dang chaffle while I was trying to find my password! I can’t believe it’s been so long since I posted that I was logged out. I am home for a few days since I FINALLY got an appointment for a COVID shot. 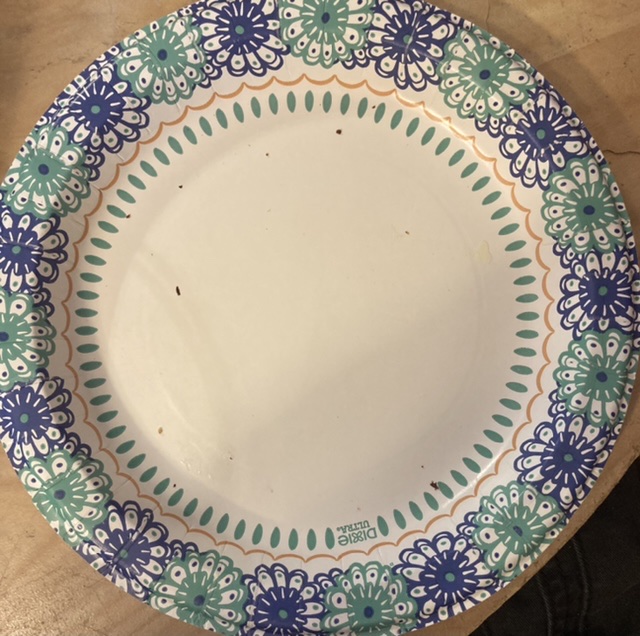 It happens. At least if someone has such tiny meals

I make good attempts to go back to OMAD now (if not every day, on most days. I prefer bigger meals now even on carnivore). 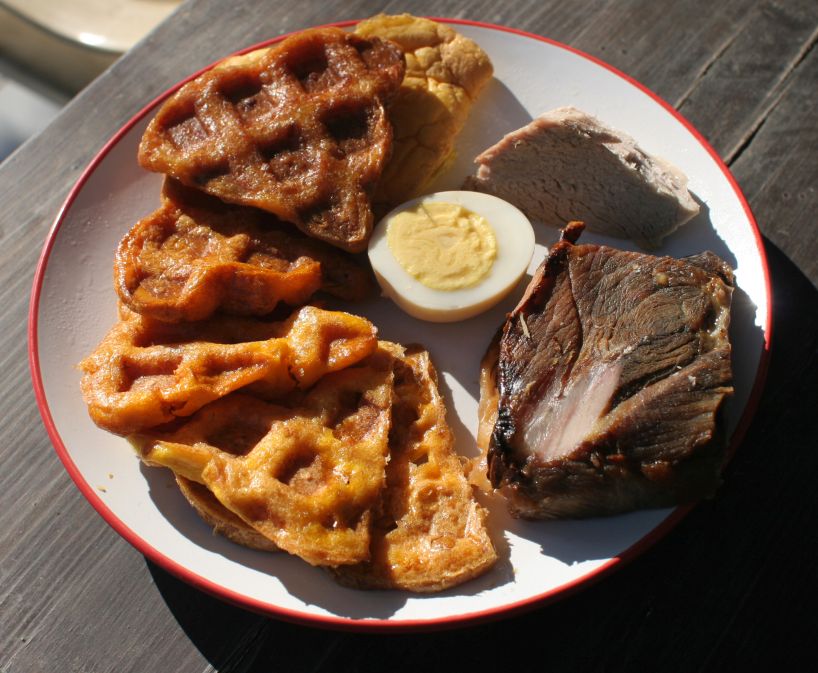 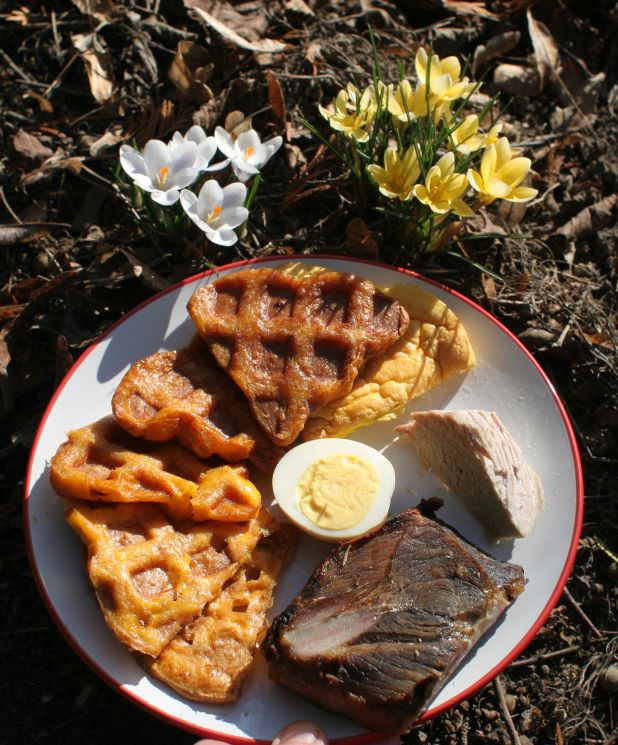 Haha, I thought you went NOMAD. (And inadvertently, there is a pun in this: Nomad definition is - a member of a people who have no fixed residence but move from place to place usually seasonally and within a well-defined territory.)

I have never been logged out, I am afraid I would not remember my password. I do not remember it now. Passwords are nothing but trouble, but of course, we need them.

I have many passwords since decades so nowadays I use a system so I usually can figure out what mine is. But some sites don’t think my very good password is good enough (though it’s really good so it usually just has problems with the length. not like it’s short but not that very long) and then I am just glad I can ask for sending my password again if I need it…
My username is more like a problem sometimes especially on popular sites where almost anything is in use. I started to use latin names of not very known organism

That works and it’s way cooler than writing numbers after my normal nicknames.

When you have lots of leftover BBQ & can’t decide which kind you want - heat it all, eat what you can, put the rest away. I have some buttered green beans to go with.

I managed a little over half of it.

Looks delicious. It’s fun to see what’s in the fridge to stuff chicken with.

I always decide I want it all

I love and need variety

(I don’t do BBQ but often has multiple kinds of meat nowadays.) 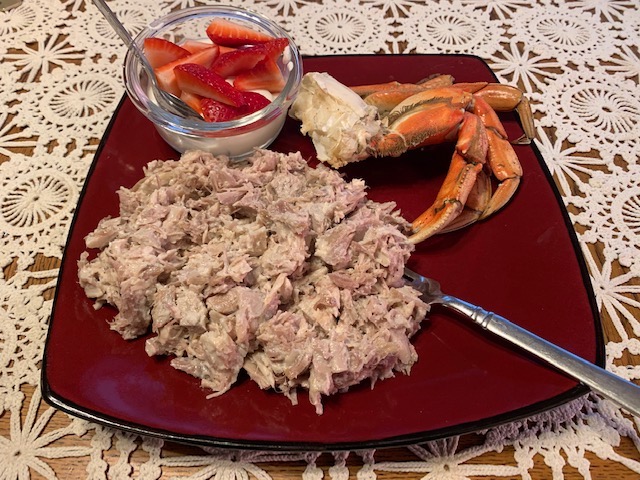 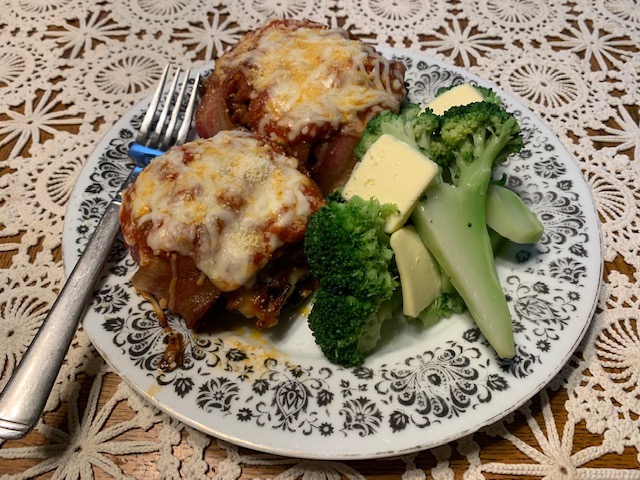 I never will be good at able to making a photo about a lunch of mine but this was part of it: 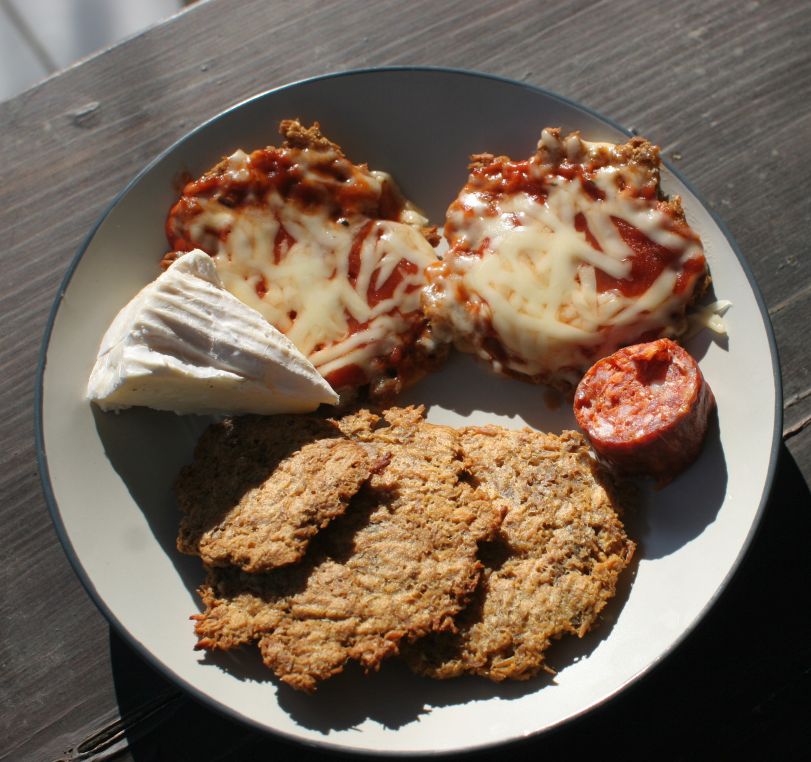 The thin things are based on a pizza crust but I changed many things as usual… I call them carnivore biscuits. They aren’t totally crunchy but I blame the fact I had to leave the house and didn’t want to risk it to burn in the oven, it was the first time I made this so didn’t know the time.
Eggs and pork shoulders, grounded and mixed in a grounder and baked. A bit dry but they aren’t for eating alone. I used them as bread and as pizza crust. It’s not the first or second time something carnivore resembles something totally else, some bread type things. Vaguely, of course but something in the texture is there… I like that.
The cheese is my favorite camambert, there is sausage too and that’s it.

I had some not very decorative chicken soup with a poached egg and meat pieces and a quark/sour cream/egg yolk dessert as well. It was a nice OMAD lunch though I am borderline hungry now (and it’s only 8pm), I ate too early and maybe a tad little. And I am quite hungry lately, I ate a ton in the last 3 days but it doesn’t mean my body is okay with little now.
In the worst case, well I have some leftover soup and thankfully I can get away with small late meals on carnivore… Even if today wasn’t carnivore. I used 20g tomato sauce for my pizza and that’s only one violation of two. Still not too bad but I better behave in the near future, I tend to slowly go astray.

I had enough and I will make steps to avoid such photos in the future. Harsh midday sun at its worst

I have read about photography today (portrait as drawing portraits is my forte. I so wouldn’t be a photographer, that’s tough! :D) and got reminded of some useful tools in this situation…
And under normal circumstances, I am not even hungry around 2-3pm yet so I can play and experiment… Spring made me more motivated even if it’s food photography. I still am not very interested but those harsh shadows probably must go. Even if they are midly fun to me sometimes.

OMAD… Large Hamburger/Bacon Salad with Taco Sauce, Sour Cream and Italian Dressing. There is some Lettuce and Tomato underneath the pile. 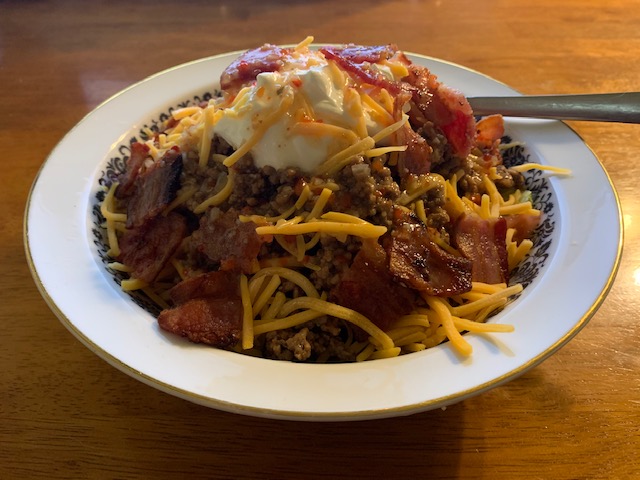 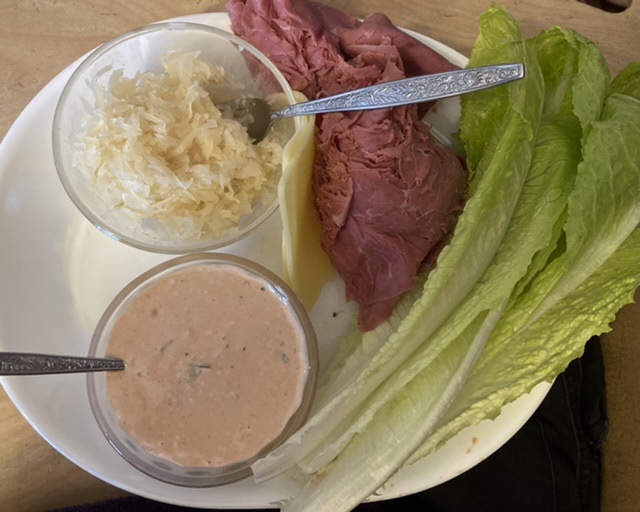 Lunch… An Arby’s Meat-Mountain, along with their 2 for $6 Fish & Tartar Sauce… No Bread. 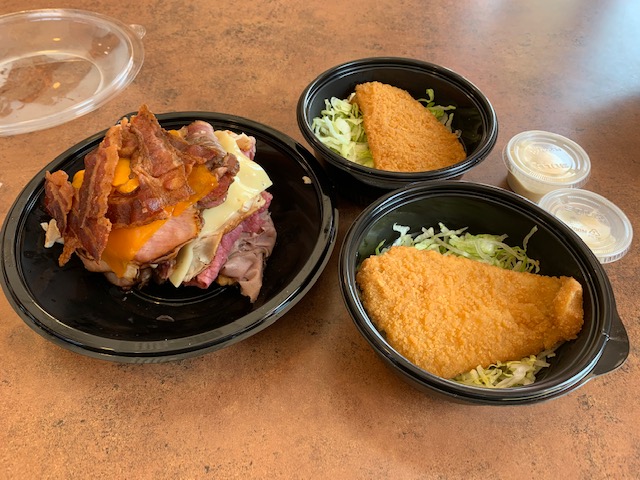 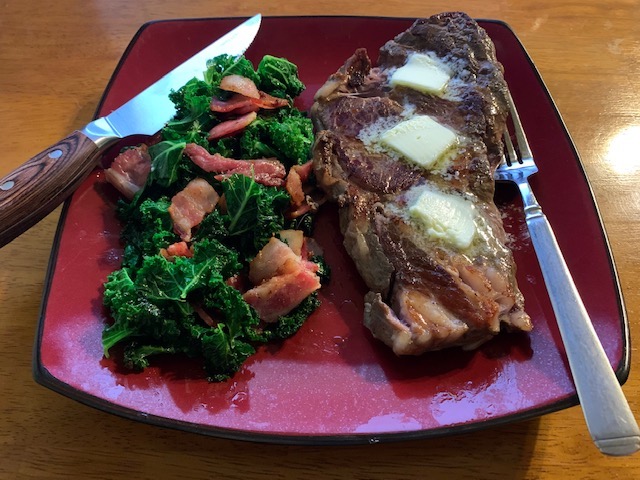 I also ate some Pork Rinds with Cream Cheese Dip, since the Wife asked me to whip up a batch, and I ate 1/2 of the Pint of Mint Chocolate Chip Rebel that I had in the freezer. 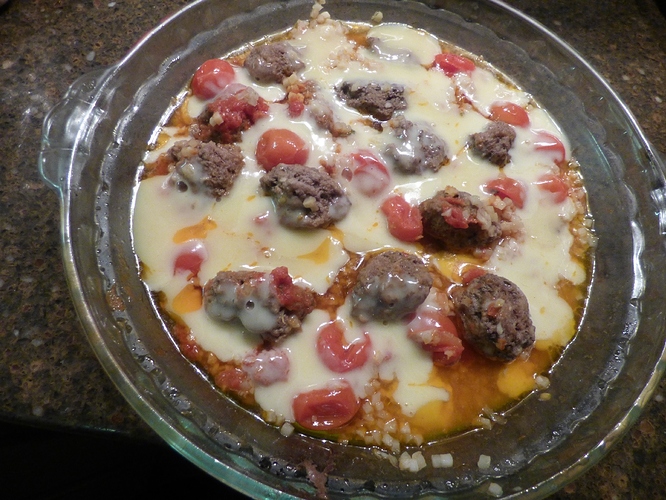 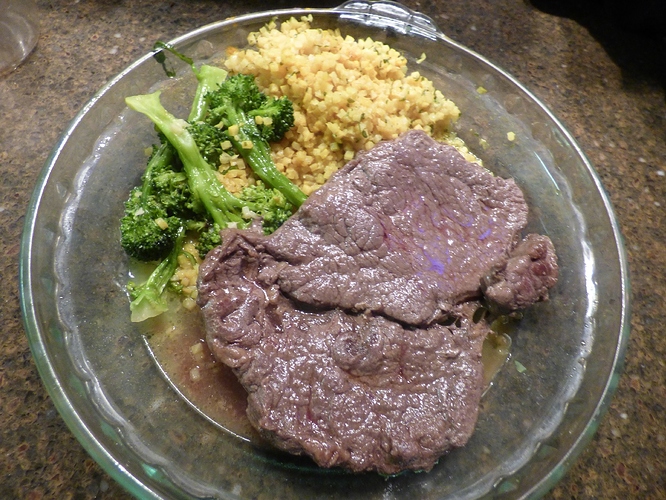 Steak with broccoli and cauli-rice. The yellow comes from turmeric. 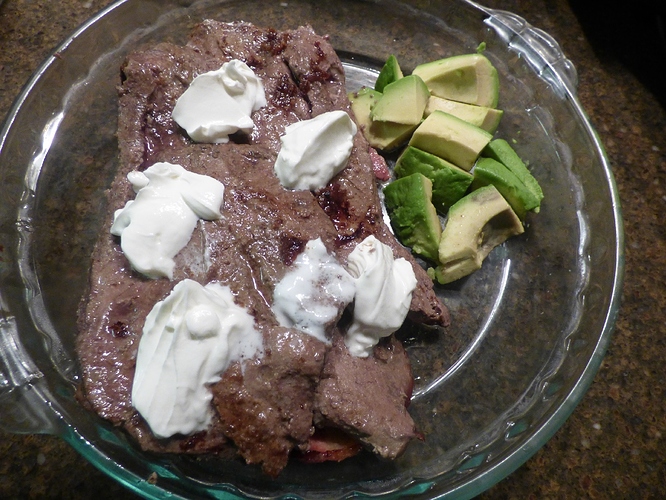