I feel I am the worst at food photography in the site (I am mildly content with my nature macro shots as a very tiny, not serious hobby photographer but my food? I feel so inferior and I am not even interested at getting better, it’s just food, I wanna eat it, not making it pretty…

I am often hungry anyway when I fill my plate, it doesn’t help) and I eat my usual things so no photo from me but I wanted to express my thankfulness about eggs in purgatory. I have heard about that wonderful and super easy dish in this topic some months ago and it’s still a huge hit in my household (still? it probably will be popular decades later too, we love the ingredients and the wonderful result). Oh if I was aware about its existence when I tried to cook the same food for two people with very different woe… We both are sure we won’t get bored of this dish if it only happens a few times a week. There is even some variety in it… And I can put meat into it too…
It makes my life so, so easier and better sometimes

For me, fat is very satisfying, as is protein. I’ve seen quite a few people say that just fat really doesn’t do it for them - and eggs have a nice mix of protein and fat, so eggs should pretty well cover things…

It depends on the fat and the protein in my case. Cream and all rendered fat - not satisfying, just add calories. And chicken meat is fine in small quantities but I never could get satiated with it alone.
Eggs are good but I need calories for satiation so 10 eggs just isn’t enough for a typical first meal (usually my biggest one) even if I wasn’t hungry when I started to eat. And I usually get bored with that amount unless I was very prepared and used tricks. But eggs don’t have everything anyway so I combine them with meat.

Surprising to me is that onions had more carbs that broccoli or cauliflower.

Not to me. It’s an extremely flavorful, sweet vegetable

It’s a useful “spice” for me, a little goes a long way (now, at least. it’s one of my favs and I ate it in bigger amounts sometimes… one big onion per egg in my scrambled eggs… or more like, eggy fried onion… I had to stop when I went low-carb, way before keto. no problem as I didn’t actually needed it in big amounts… I saw stew recipes with more onion than meat, well, I don’t think it’s needed or even preferable… I use way less than that.)

Garlic is even (way!) carbier. But one usually uses it in even smaller amounts.

Almost all vegetables are too carby if one eats them like I did, in big quantities… But adding flavors to some good protein? That can be done in few carbs.

It’s unbelievable how I NEVER get sick of eggs. I think I could eat them for every meal for the rest of my life and be happy.

But I have my limits. I like to keep my egg consumption below 10 on most days (and definitely per meal). And it takes a very tempting egg dish to accept more than 2-3 eggs in the same form… I almost never eat only eggs (with a little extra) for a meal, it only happens if a quite small meal is enough and that’s rare.
I am not into scrambled eggs/omelettes nowadays but I had such a phase… I ate scrambled eggs for every lunch (among other things. see my 2-3 eggs per dish limit) and was surprised when my SO told me it’s not something he wants to do multiple times a week… But he eats boring (and mostly carb) rice cake 10-20 times a week… Since many years, with some tiny break sometimes when he has too much other sweets (not chocolate as it goes well with the rice cakes)… Tastes differ but we both can’t get bored of our favs easily.

Don’t worry, Shinita, I hate taking photos and all the complications (e.g., file too big). It’s traumatic for me.

I’m just not a photo person. Someone once wanted to see a photo of my baby granddaughter. I said, “She looks like a baby.” Same with my (nonexistent) “before” photos – I looked like a fat person!

Haha, there are no pics of my fat me either. 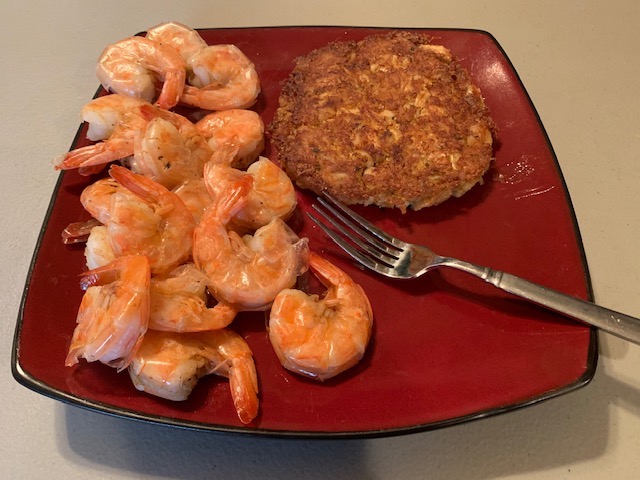 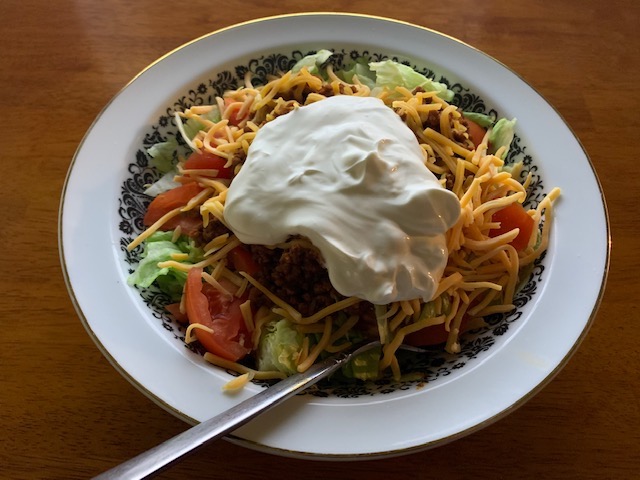 Makes me want some.

Thanks… It was quite good. Just nice to be back at home eating at a regular time again.

Today’s OMAD … Top Sirloin & 1/2 Rotisserie Chicken. The Wife actually made 2 of them today while I went into work to review some project sites, along with dropping a steak in the Sous Vide early morning. … I’m actually teleworking presently, but decided to go in a couple days this week to enjoy a much, much needed break in the freakin’ weather! Breezy, but much warmer than it’s been here lately. 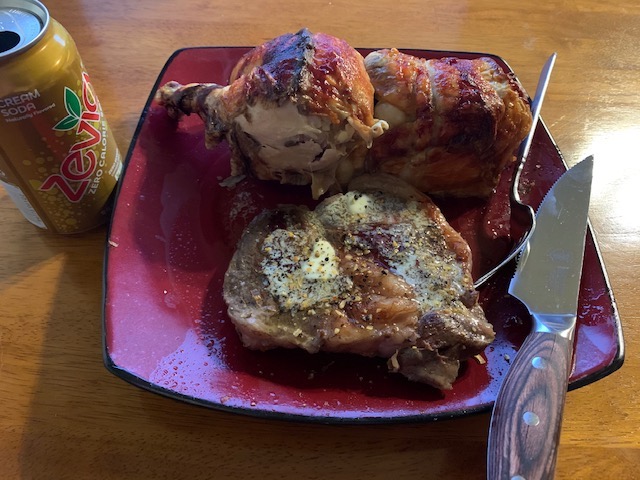 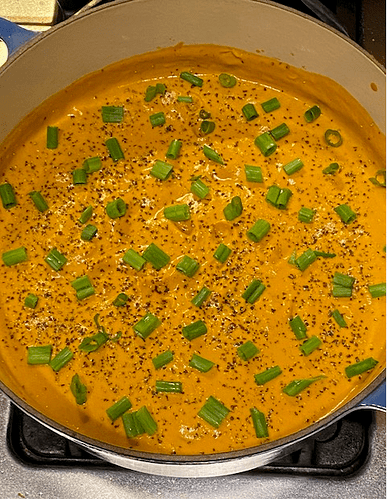 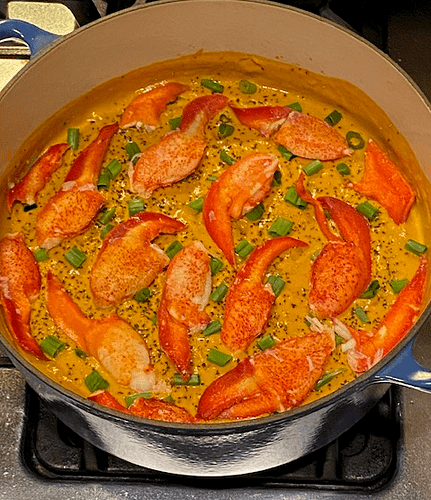 Lobster Bisque - had it with green and white asparagus.

Looks nice, Doug. … Where did you get your Lobster from? Looks like all Claw meat.

Dave, Restaurant Depot, 2 lbs. for $49.74. For the picture I had the claw meat on top, but the package is “knuckle and claw meat,” and ~60% of it was claws. The package says ‘Orion,’ even though Chicken Of The Sea bought Orion Seafood in 2015. Frozen is not as good as fresh, but it was still “very good.”

I see ‘Orion Seafood Lobster Claw, Knuckle & Leg - Frozen - 5oz’ listed on Target’s website for $9.99, which be nearly as good a deal, and people were reviewing it as recently as last year.

Around, here, live lobsters are usually $17 per lb., and of that roughly 20% is meat. Expensive stuff… Sometimes I see grocery stores having sales on frozen lobster tails that makes things not too brutal.

I wish I could give it more hearts <3 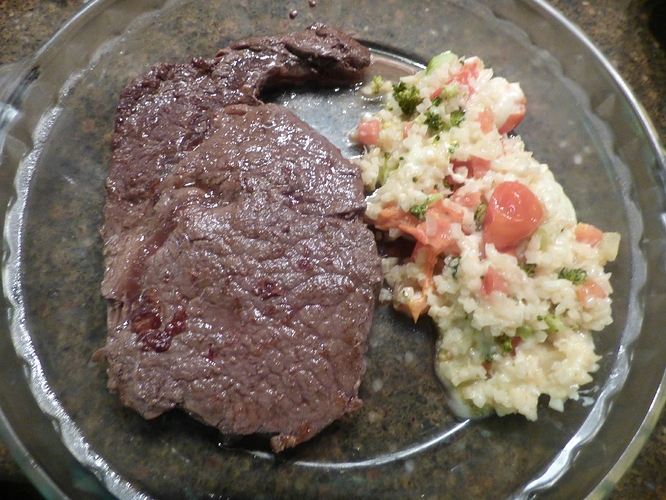 Steak and cauli-rice with tomatoes, broccoli and cheese. 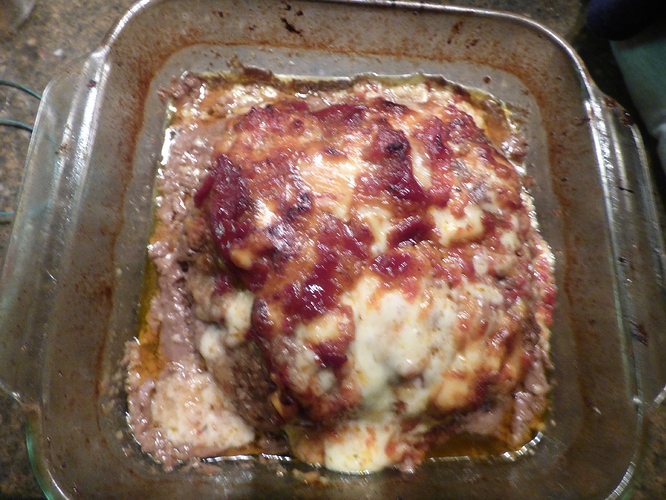 Meatloaf experiment. Looks like hell but oh so good. Meatloaf stuffed with cheese and bacon.

Sorry about the blurry pic, but the meatloaf was so hot, it kept fogging up the lens.

I am not against making photos, I almost always had some kind of camera, I prefer nature photos though.
I even made photos about my food sometimes (the only normally popular topic I don’t make photos of is myself. or other people, actually. of course I have no before photos and I am perfectly fine with that, I don’t get why would I need that) but it rarely ends up good. I can’t even put much effort into it, it’s food, not art to me. I do love pretty food photos, it’s just not my job in my eyes. But I still want to show my food sometimes and it bothers me if it’s bad.

Filesize isn’t a concern as I never would upload a huge file without some extremely good reason. 1000 pixel is more than enough for a food photo but the worse my photo is, the smaller the size I use. 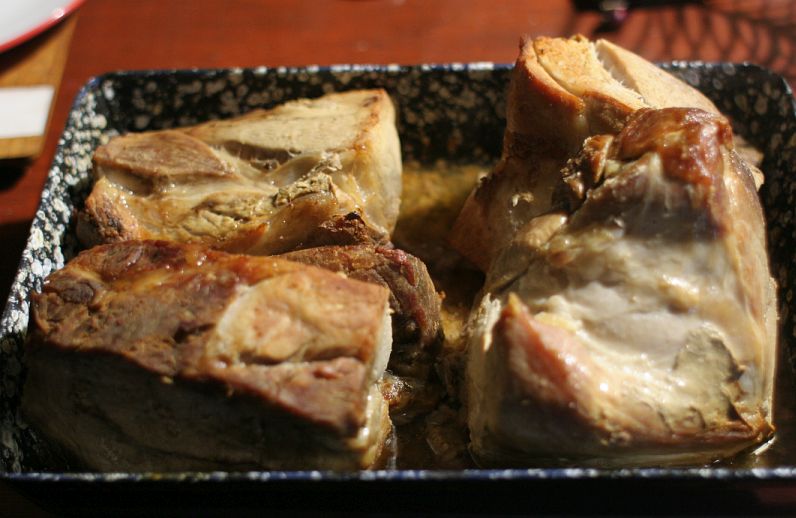 I already put this into Fangs’ carnivore thread but I show it. It’s a bad one, wrong focus and not enough light due to the late hour. I prefer to shoot my food outside in the sunlight.
It’s 3200g meat (roasted, kind of. it stood in water, I never put this much meat into my oven pan before

the smaller amount needed extra water), my beloved pork chuck in the left, thigh, whatever it is called in English in the right (leg? too general. ham? but isn’t ham only the cured stuff? we call it thigh here and yep, it’s the thigh of the pig. I looked at some diagrams but they used different words and I gave up. it IS thigh just maybe not the word used for it as a cut).
We have been eating it since 2 days. I just add some eggs and today a lot of cream too, my SO eats it in tiny amounts with lots of carbs as always. He gets the lean parts (he eats more fat than me but he doesn’t like very fatty meat), I eat the fatty ones.
We will buy only chuck in the future, it’s perfect for us to share, it’s a tad too lean for me.

I used one teaspoon of salt for the whole thing, not a bad amount but most of it ended up in the water so it’s a bit unbalanced. And I had to add a tiny bit salt to the inner parts.

That’s what I like. Just meat in a pan with a little salt. Perfect, nothing else is needed for that course.
3 eggs and it’s a complete meal for me. I typically do TMAD nowadays, I just can’t eat an OMAD sized meaty meal even if I wait until 6pm.

I never ate this simple before… I won’t do this all the time but often I suppose.

This is a nice amount of pork for a day for me, I don’t always eat this much (~560g if I remember correctly): 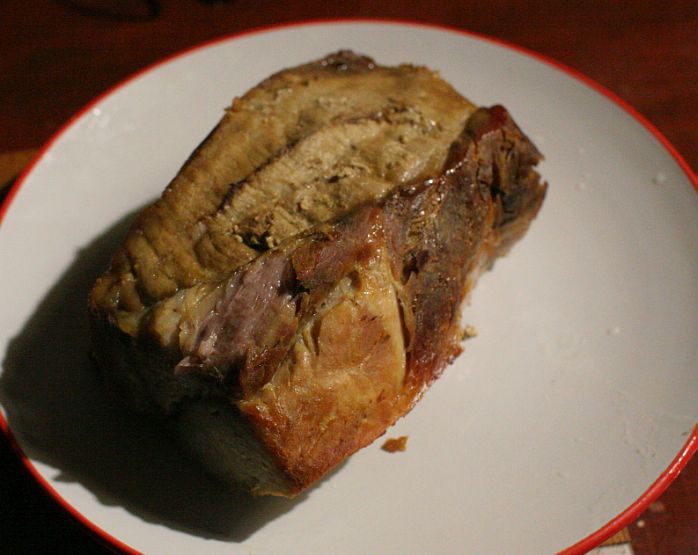 Apropos good food photos… That Lobster Bisque one is fabulous~ Those colors and shapes!

Makeshift lunch… My Tea and Water had gotten warm while working and I wanted something cold to drink. But I saw some large Sunflower Seeds that looked good and wanted some. But I refuse to snack, so stopped by the Deli and got 1/2 lb. sliced Ham and 1/4 lb. Pepperoni. Plus I was in my Snow Office so didn’t have any plates, so Aluminum Foil had to do for today. 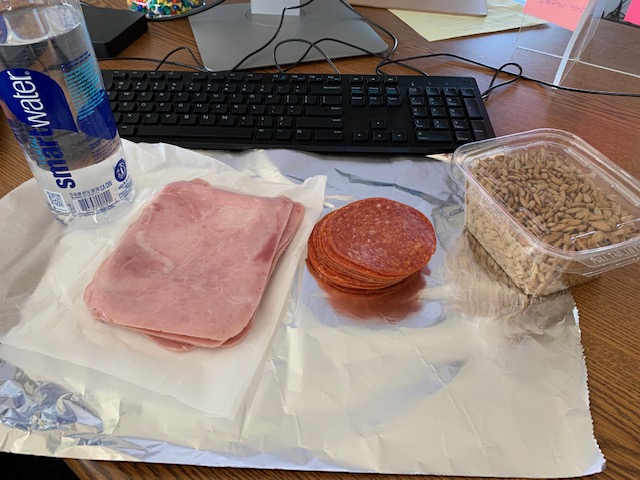 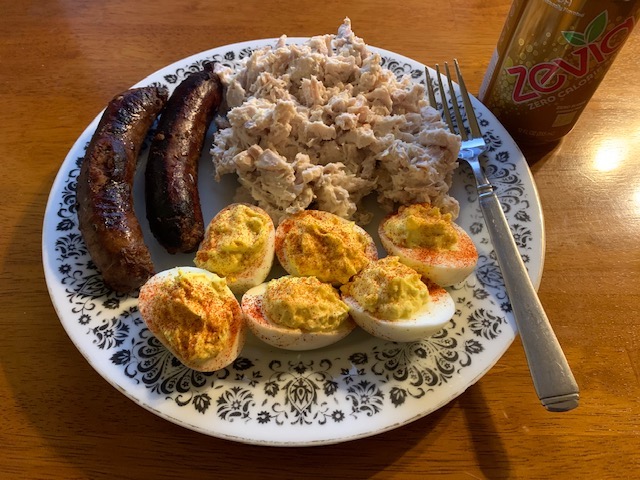 ), I mostly want to see what other people eat and how they manage their keto. The lousiest picture can look great to me if the food turns me on. I get lots of ideas here.

Indeed, ideas, information, that’s important for me as well… BUT if I already make a shot, I want it to look okay as well. I love pretty things, I draw and sometimes design something and I did make quite a few photos in my life and know something about composition etc., I can’t stand if I am too bad. I don’t expect to rival the best ones here, it’s not important for me (thankfully. I can be very competitive if something is important for me and I have skills) but I don’t want to be really bad.

Today’s lunch was the usual for this week, 3 poached eggs and roasted pork.
My little photo doesn’t show how much, it’s merely to illustrate how fatty today’s chuck was and what fattiness I expect from my meat: As it was perfect. Nice even cold (I ate some parts cold, some parts warm). 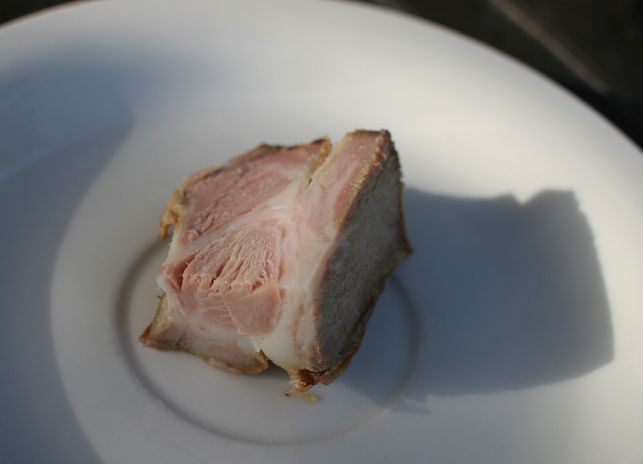 I wouldn’t want to live in a country where I can’t get some nice properly fatty pork easily. No meat is more available than this here (chicken is just as common, chicken liver and heart too, I need a butcher or a big enough supermarket for pig liver. beef is harder to find and beef liver and heart isn’t trivial to find even in a hypermarket, and the nearby beef farm doesn’t sell it anymore). Chuck is just perfect for me and my SO (he eats some leaner part and the rest is perfect for me) but there are way fattier options.