What are you having today?

What a beautiful thread. I have this going on in the crock pot, it was piece if meat from beef, called culotte, it had a thick rim of fat. I let it all simmer all day, just topped it with water, salt and pepper. I just pull it apart, and eat it like a juicy stew. 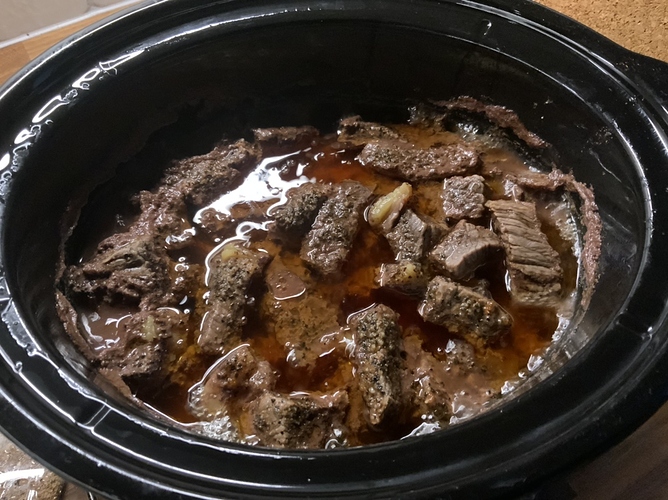 I had a cold lunch today. Lots of those deviled eggs. Then a few pork rinds with homemade yogurt dip.

I don’t like broth, soup, or gravy, so I’ve been throwing the broth away after I cook beef. It seems a shame to waste it though. Maybe I’ll try having it as a hot drink with meals. 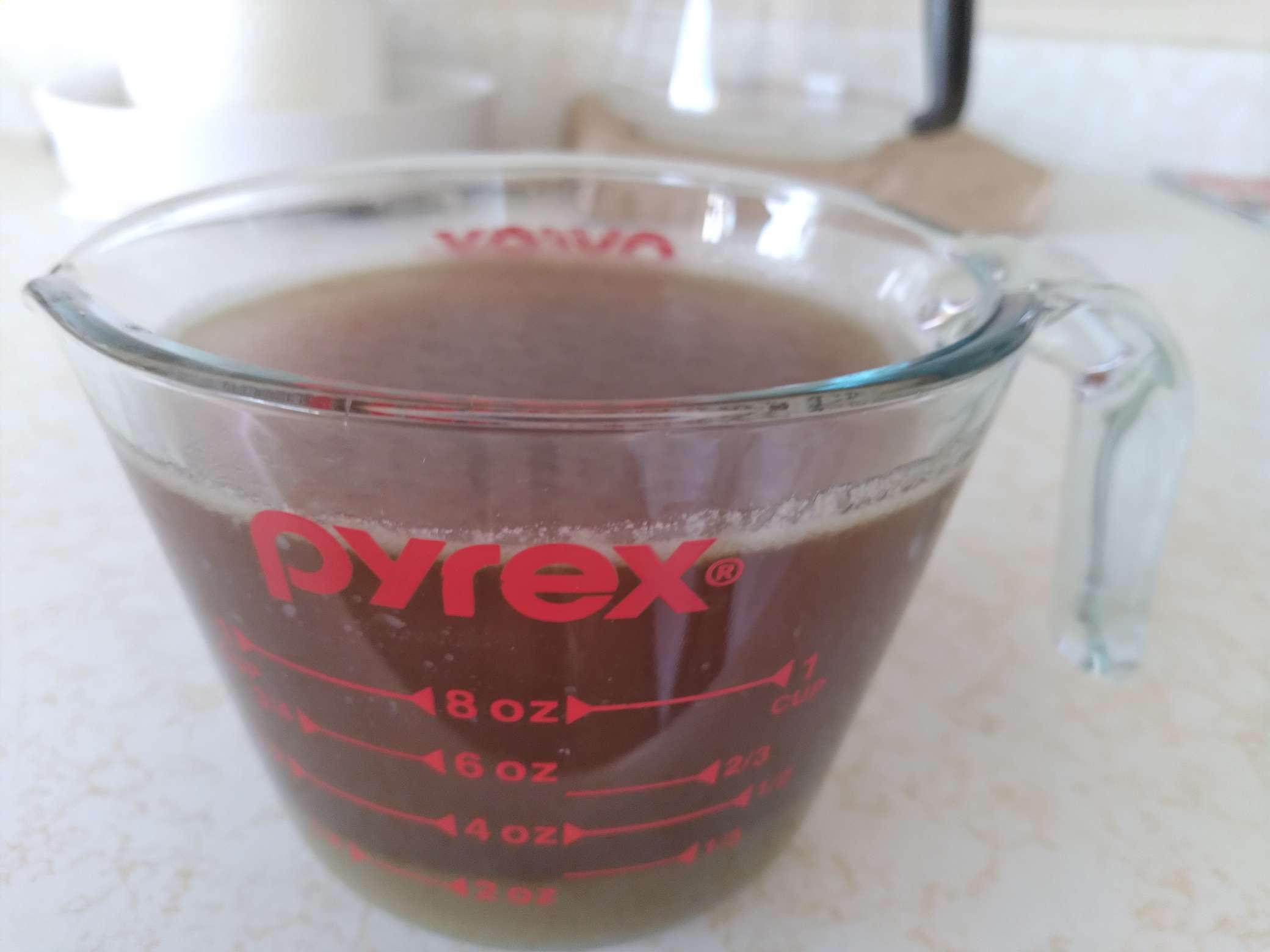 Left over wings and pork rinds for lunch. Whiskey steak for dinner.

I don’t have a proper sous vide setup, so I fake it with a slow cooker and infrared thermometer. The outcome: For supper, cold sliced beef and some heated broth. I’m still hungry, so I’ll have some deviled eggs. 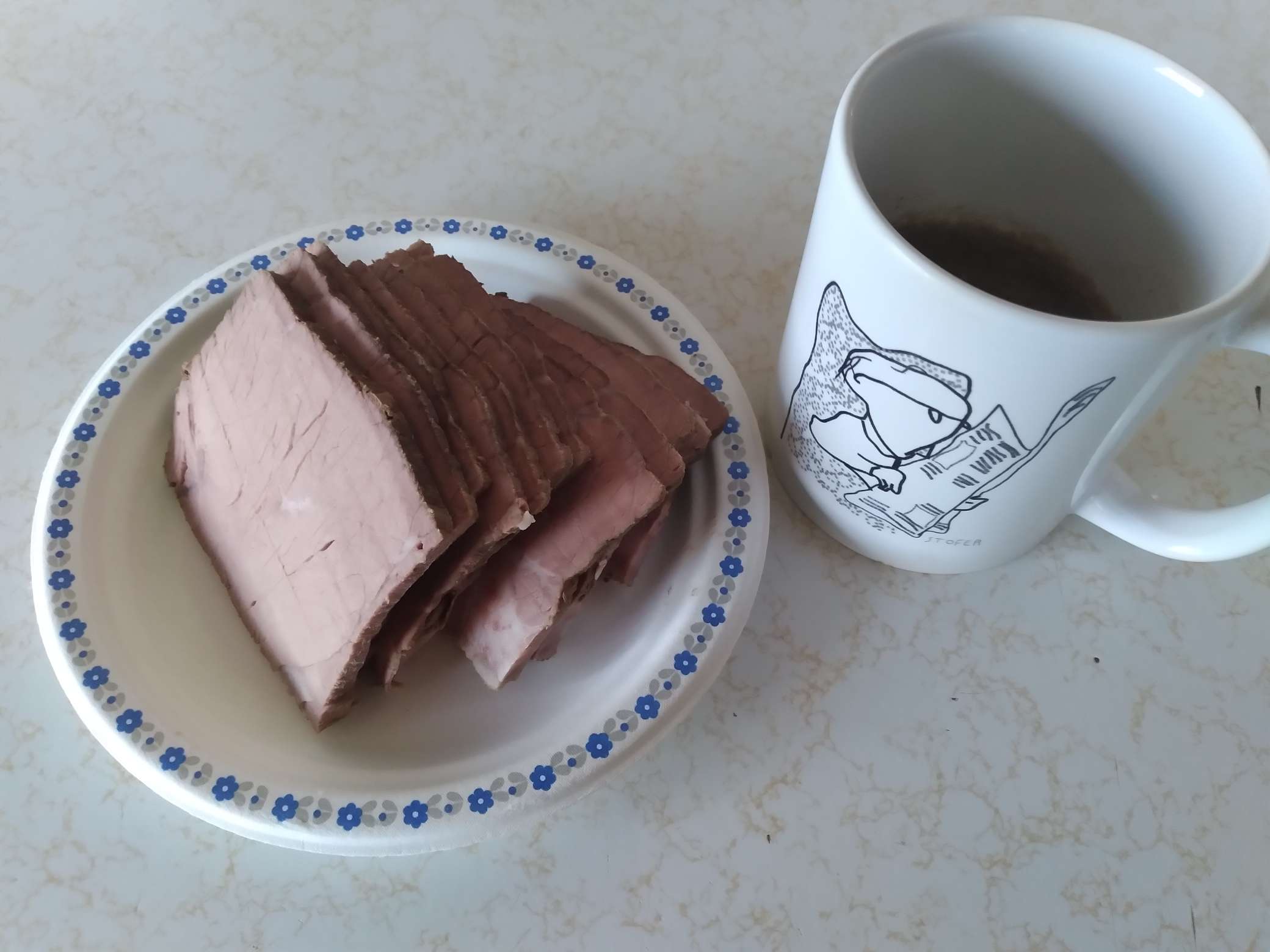 I ate the rest of this roast I cooked yesterday 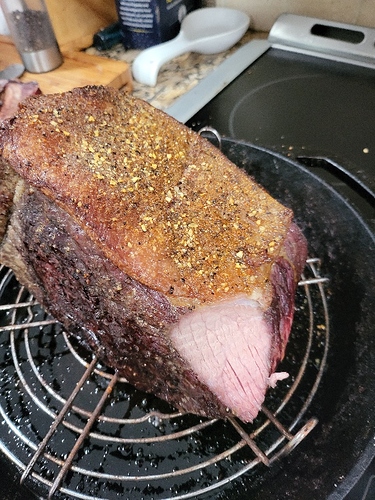 I am the same. I tried to do bone broth and all that too and in the end I have 0 desire for it. What I do is save broth like that for crockpot meats or using my dutch oven when I do something bigger like a roast, but in the end, I mostly throw it out also

I hear ya on that. Drinking it, be a tad careful, it ‘might go thru you’ cause the fat content of whatever meat it is from could be more concentrated and your guts might not enjoy it too much, but ya never know, it might be something that suits you well.

------------today is steak and shrimp
got some chicken breast to do something with also.

Meanwhile I always loved the liquid part of the soups

Well now I like the meat part too but my old soups never had any meat. But now I kinda got bored with my meat only soups too, I don’t know why. I always use different meaty bones and ratios, maybe I just need it right?
Whatever, I can’t live without soups so I will keep making them. When I was a kid, I ate soup for every lunch as it was the norm in my country (surely some ate it for dinner as they were home then. but my warm home meal was lunch. lately it’s often dinner).

So it’s the opposite to me. I make soups for the liquid - and eat the boring boiled meat that isn’t my style too. It’s not necessarily bad though… If one has soup with it. Alone it’s not that great even if the meat is tasty. I am a lover of roasts and rich stews! Not boiled meat especially not beef. Pork is good almost in any way

Better not boiled, though

My soups produce some extra fat though. I dislike fatty soup. But using meat/bones with the right amount of fat should help. Next time there will be turkey necks (my preference for soups. I tried duck or goose necks but those were way too fatty. and turkey necks have lots of thick meat! and I love turkey, that doesn’t hurt for sure) and some meaty pig bones (I cut off the skin and fat layer previously if they have it. last time they had, so much that I couldn’t even eat it with the meat and I love fatty meat).

I will bring photos when I can. My next days are shaky anyway, run out of this, can’t make that yet, the little ready to eat meat is so lean I rather fast and I finally can eat ruminant meat and it’s in a carbier soup. But it’s not so great anyway this way, I want the mutton from the farm but they only sold it once… And I have processed meat (more like fat but meat is included too) to eat before it expires (I can toss it into the freezer if I manage to find a tiny place there but I don’t want to).
Why I don’t have some pork chuck roast in the freezer all the time for such times? Oh because I rather eat it all in a few days, that’s why. But my next slab is huge so maybe I can part with some smallish amount of it.

Sorry I will be more concise with photos next time!

food change yesterday
ran and bought me a smoked brisket and WOW it was devine. yummy fat cap too! weeee…
I ate well yesterday

and paired this up with a second small meal of 2 cheeseburger patties. 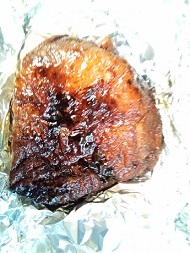 today is steak and shrimp
got chicken and burger when required to fill in my day. some reason I got a nice tin of sardines on my mind 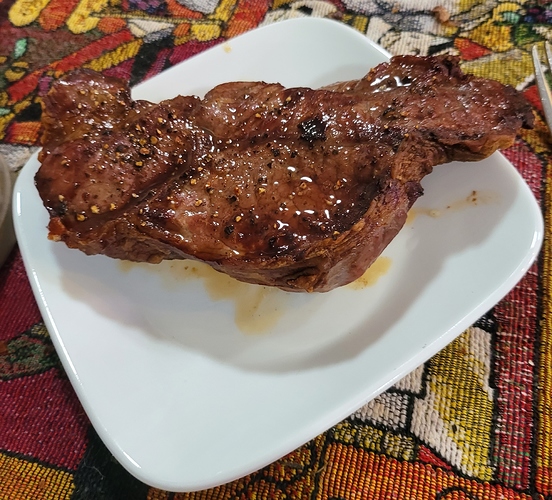 @Shinita I’ve never been a photo person, but this seems like a fun thread, so I’m giving it a try. I’m extremely bored these days (moved to a new town where it’s hard to make friends), and food photos give me something to do for … about one minute a day.

More scrambled eggs. I love bacon and eggs, but I don’t have any bacon at present. I bought a large ham at a low price. After I cut it into smaller pieces, I’ll be able to have ham and eggs. 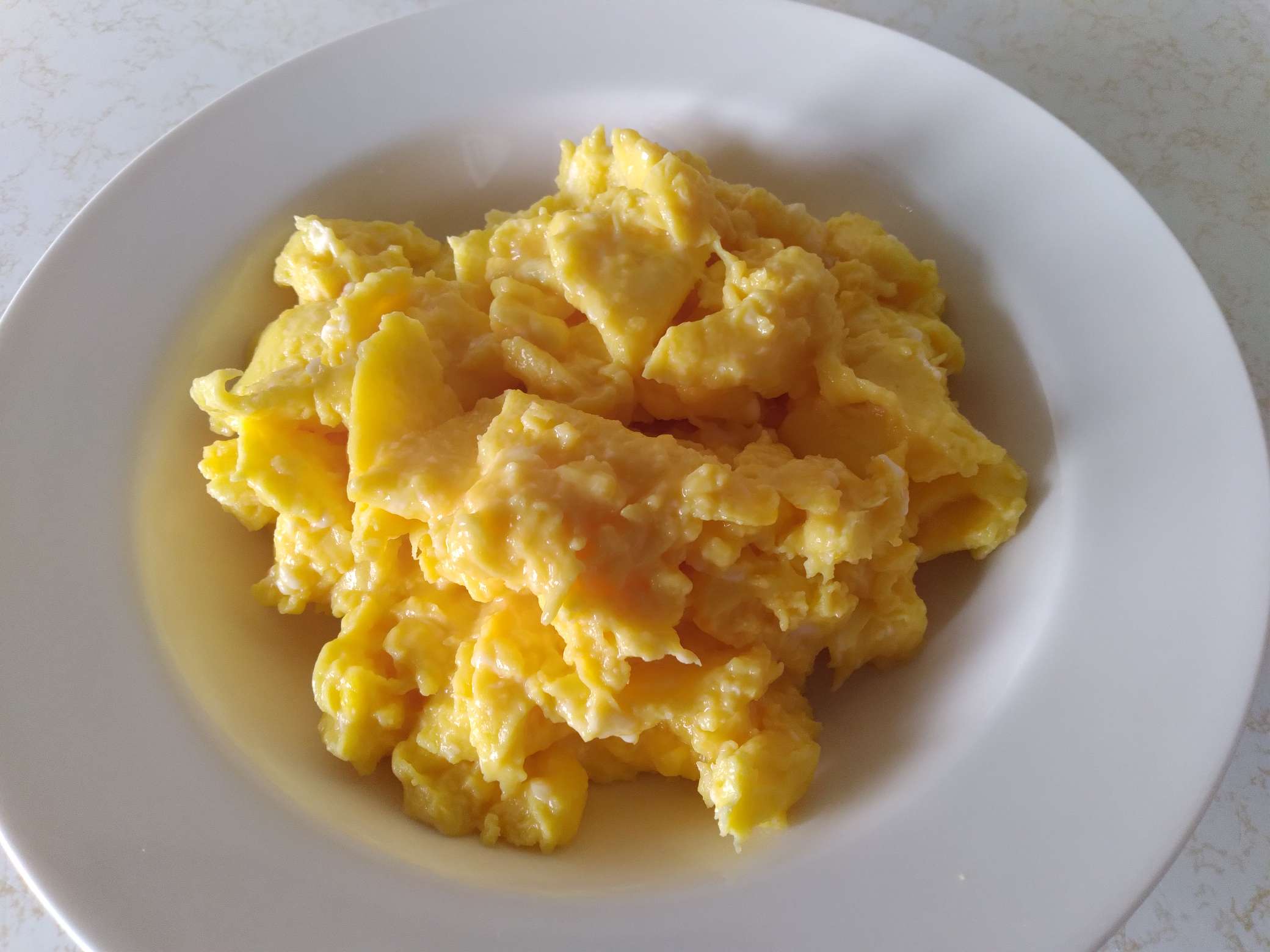 Bacon wrapped chicken thighs for dinner. Also cooked a thick ribeye and two New York strips for tomorrow. New to the forum so I’m hoping I didn’t crash the party.

Welcome to the party, Shawn!

Appetite back to a gentle hum today. I devoured that rib eye roast within hours - all 2kg of it, but today I had 300g of steak and some chicken wings.

You’ve just added to the party!! Welcome and party on!
Nice food list there, sounds like you’re all over this.

Yesterday was a big exercise day, lots of hiking and doing HIIT with friends so by the end of the day I had the big hunger that can only be crushed with a generous well salted piece of lamb. Dessert was a second one! Haven’t eaten anything since, aaah the deep satiety of red meat is unparalleled

Thanks, I’ve been low carb for years and off and on keto for nearly just as long. I’m looking for a few positive lifestyle changes and am diving in head first to a dedicated keto lifestyle. probably go full carnivore in November. I’m lucky in that I don’t like sweets, but I do like beer so there’s that. Lol. 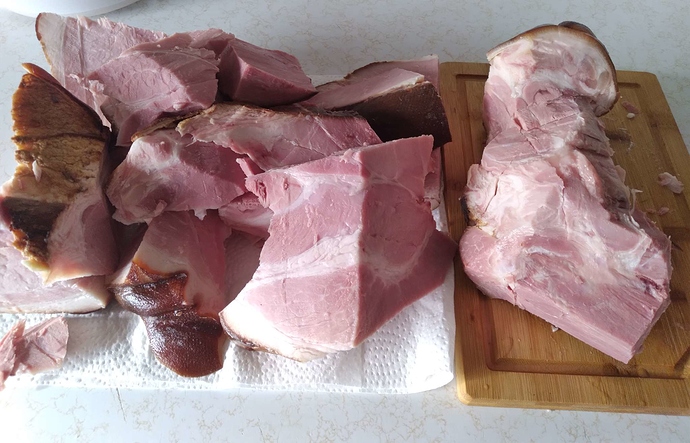 I can’t eat most roasts – or steaks or chops – because of an esophagus problem. So it was a real treat to have a nice ham roast. I’m tempted to buy another ham while they’re still on sale. 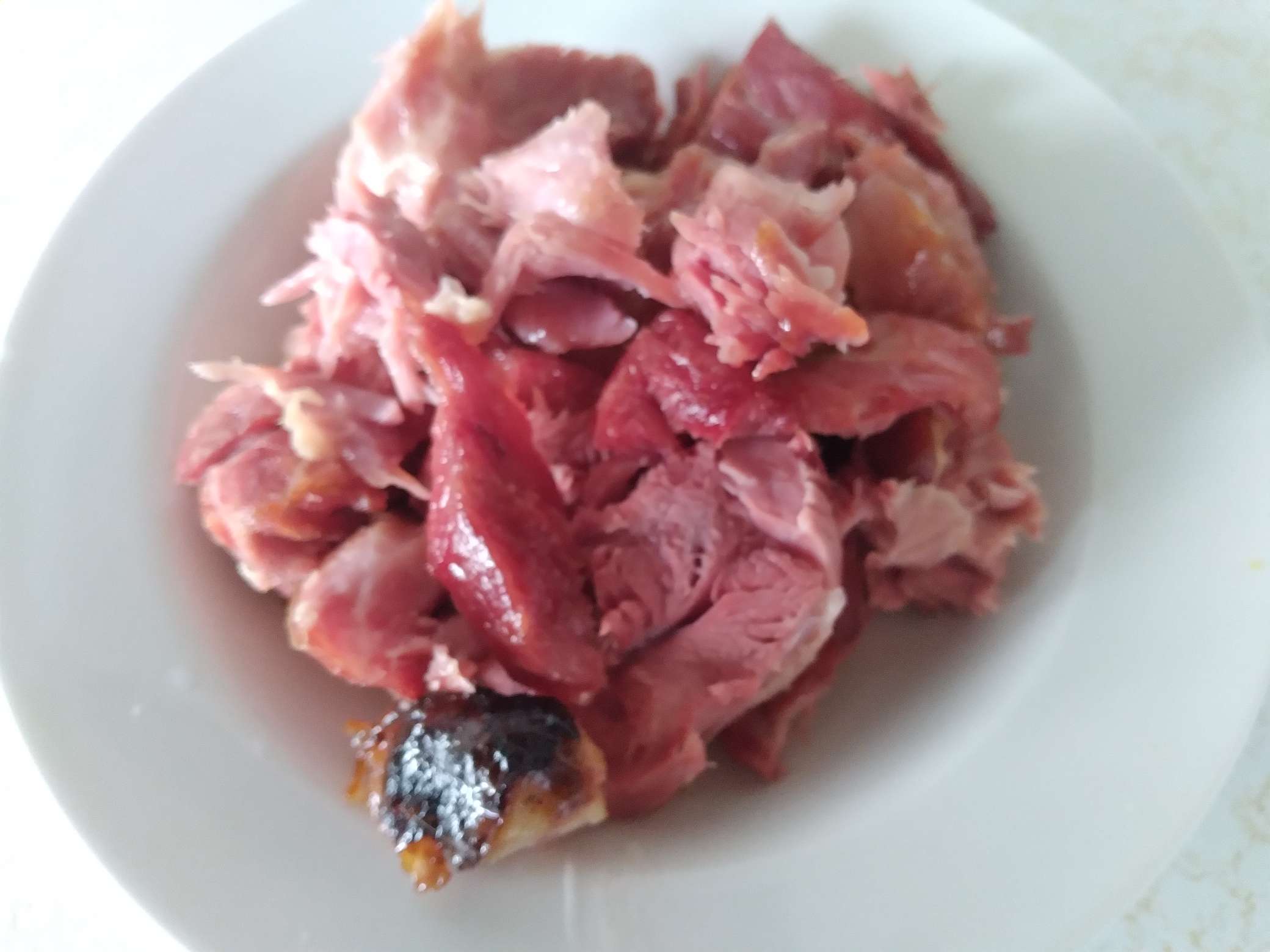 @ShawnM
we always have a great party

filled with alot of meat! welcome. jump into carnivore when ya can, you will like it here

anything wrapped in bacon is never a bad thing for us carnivores!

@islandlight
Moved to a new location and kinda bored. I hope you get a chance to explore around and make up a new good routine to keep ya active

Are you a hiker type? Maybe hit up a ‘meet up’ in your area for local hikers? Just thinking out loud.

------some brisket and chicken today
not sure on other, my mind is geared at a lb. of bacon and some melty cheese grated over it. I dropped bacon for a good bit but lately I am heading back to it. Never can go wrong with bacon!!

I made deviled eggs for the next few days.

Love them! Wow, and you even piped them!