Not sure how I missed this one… 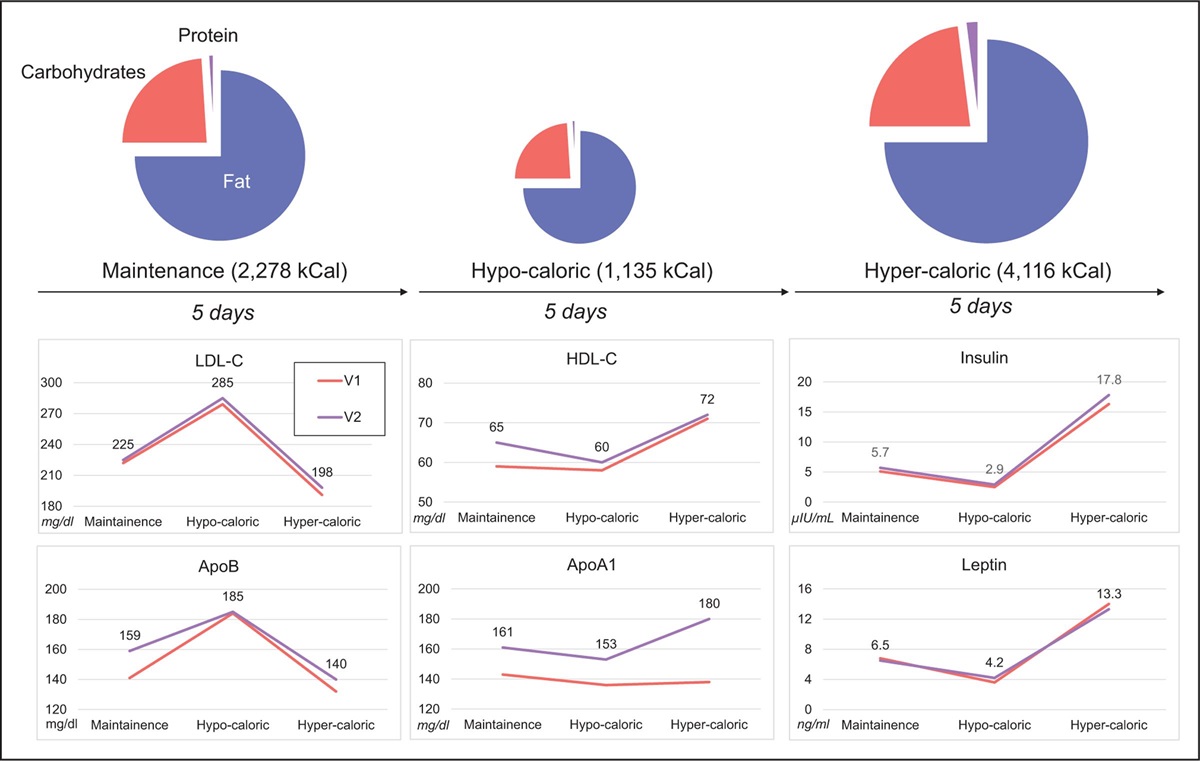 simple paradigm cannot account for the lipid patterns, nor for the magnitude of effect, observed in ‘lean mass hyper-responders’ on low-carbohydrate diets. The Lipid Energy Model (LEM) provides an alternative explanation for LDL-C increases seen in...

This is mainly a test of Dave’s Lipid Energy Model (LEM), but there’s a lot of interesting info.

An aside before we start: I’ve always hated statements like “saturated fat raises LDL”, as I think they do not describe what happens with many people, given the situation. For instance, I have fasted 4.5 days, which raises my LDL. I then feasted for 3 days, drinking cups of cream (high in that evil saturated fat). Yet, my LDL went down. I went from zero saturated fat to a ton of saturated fat per day, yet LDL decreased (in accordance with Dave’s LEM, by the way).

Just take a look at this: 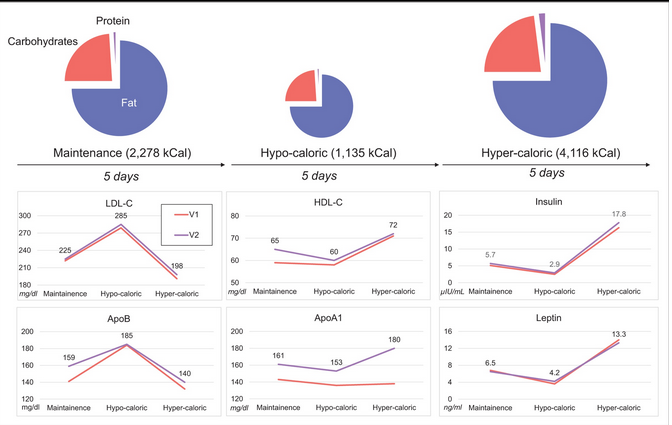 But look at insulin. Halved eating low calorie, but tripled eating high calorie. (Makes me wonder if some “high” insulin is only “high” because you eat more because you’re heavier, and not “insulin resistance” per se.)

I’ve had two anomalous insulin readings, one of 34, which came not that long after I had fasted 4.5 days. I thought it was some “rebound” effect, but I’m wondering if I was simply eating more?

Other than Leptin, which I’ve not checked, Dave’s pattern is my pattern, too, as fasting causes these same issues (LDL goes up, HDL down, same with ApoB and ApoA1). (And Lp(a) for that matter.)

Anyway, another interesting study by Dave. Congratulations and thank you.

Thanks for sharing this link. Feldman seems to remain on the frontier, challenging conventional medical wisdom more effectively than most who even try.

I’m beginning to believe that so many of these biomarkers we track are far too fleeting in nature to make much sense of. In particular, it is beyond difficult to draw conclusions as to how long-term inputs (diet, exercise, sleep, stress…) drive our point-in-time measures of compounds found in one’s bloodstream.

Since most of the serum markers we fuss over are produced naturally by our bodies, and our metabolic systems don’t turn on a dime, it seems that a “healthy” level of any of them can’t really be determined for any individual at any particular instant.

Yet we typically draw conclusions by comparing such a series of fleeting “instants” we’ve gathered over months and years. It’s like taking your pulse rate once annually at some random moment… and then drawing conclusions about your heart health.

Because this lag between (long term) inputs and (instantaneous) point-in-time metrics makes it tough to do causal research, we ought to remain humbled by how little we actually know about the complexities within our bodies at any particular point in time.

This is also consistent with Sam Feltham’s overeating self-experiments (various diets, 5000 kcal). I thought it was interesting that during the ketogenic experiment, he did gain a few pounds, but it turned out from a body scan that the gain was in lean tissue; he’d actually lost a pound or two of fat. (And he was lean to begin with, at the start of that experiment.)

@PaulL Thanks for pointing that out. Yes, the whole overeat or under eat by 3,500 calories = 1 pounds gained/lost is basically worthless. If you’ve ever met Dave (I got a chance to speak with him at KetoFest 2022), he’s definitely lean.

@SomeGuy What amazes me is all these studies you see where they take cholesterol results of people, then see what happened to them, say, 20 years later. You mean that their cholesterol values were the same over the course of 20 years? I don’t think so. One thing that hopefully Dave’s studies have shown to doctors is how variable these values really are.

You mean that their cholesterol values were the same over the course of 20 years? I don’t think so. One thing that hopefully Dave’s studies have shown to doctors is how variable these values really are.

Variable over a matter of hours, no less. 20 years seems like quite a lag in a time series correlation analysis.

Kind of like the difference between a ripple, a wave, a tide, and globally rising sea levels.

Thanks for sharing this.

Thank you for sharing this! I have saved it to pull out and share if ever needed.